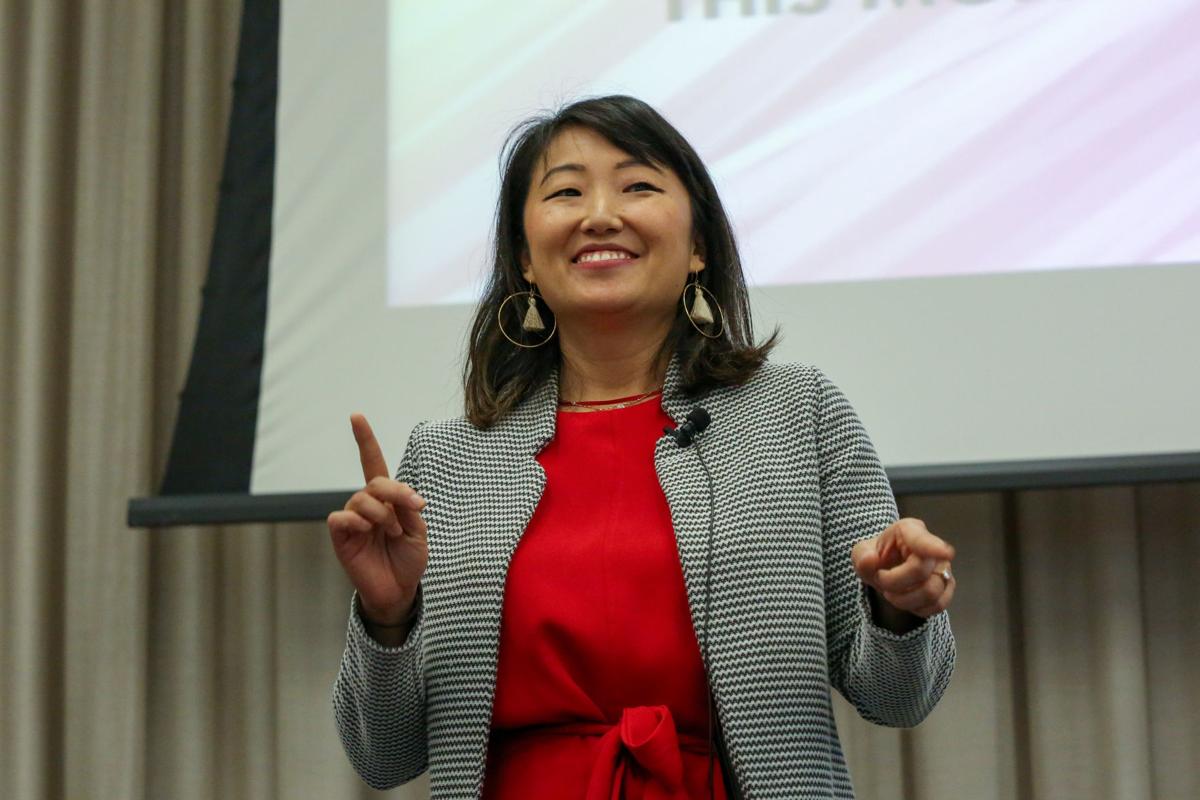 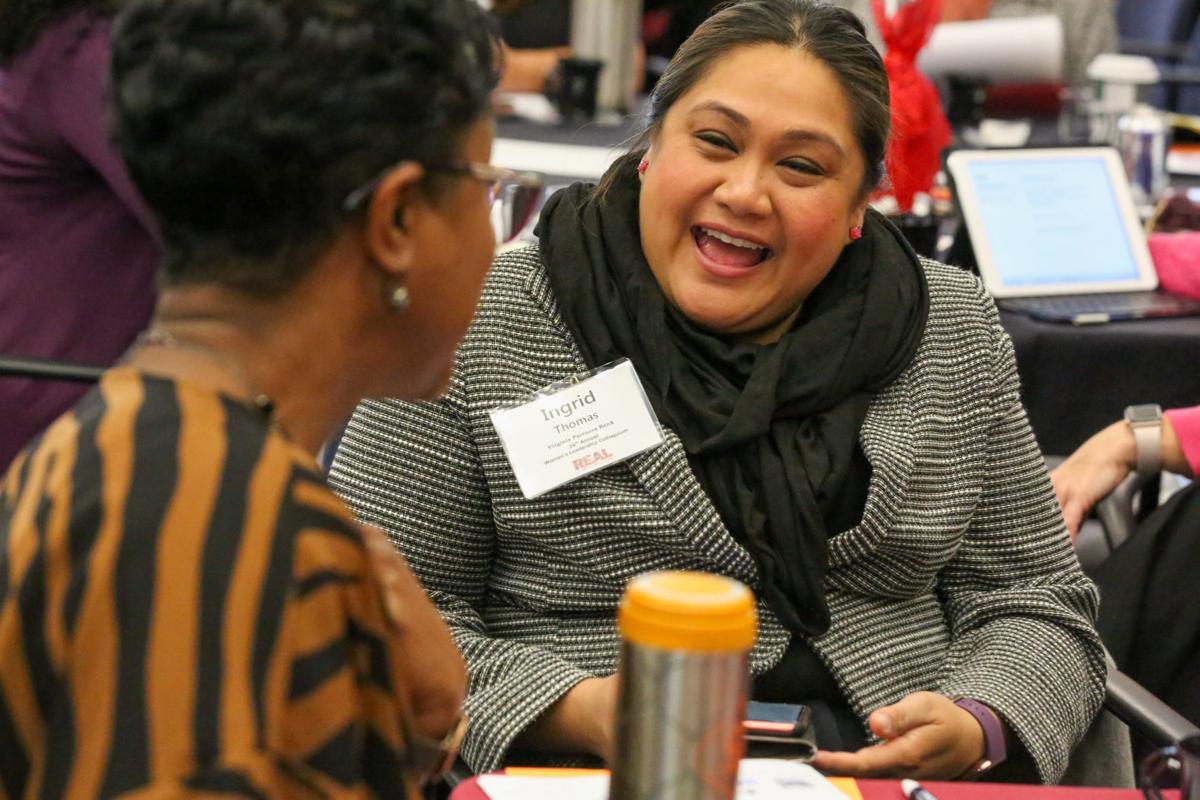 Ingrid Thomas speaks with a fellow attendee at the 26th annual Women’s Leadership Colloquium at the University of Mary Washington’s campus in Stafford County. 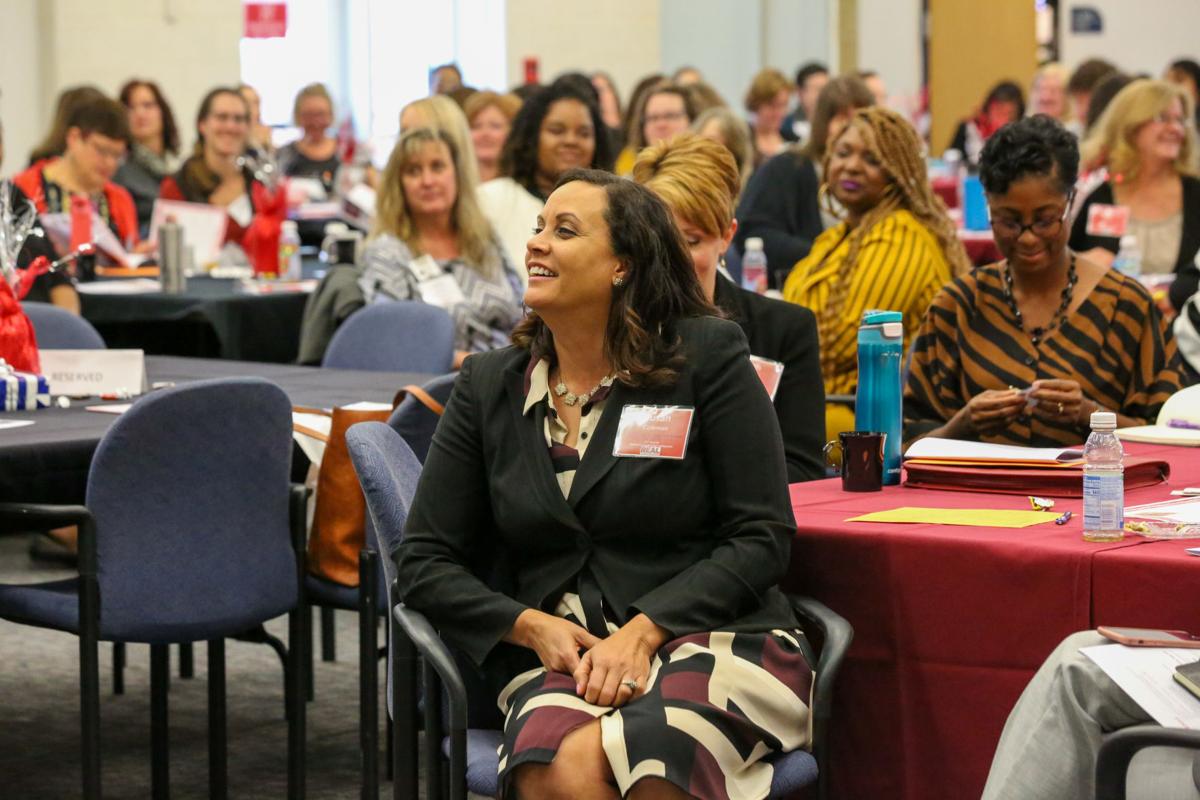 Ingrid Thomas speaks with a fellow attendee at the 26th annual Women’s Leadership Colloquium at the University of Mary Washington’s campus in Stafford County.

Cosmo Fujiyama Ghaznavi was tired after a day of networking at a conference, and nearly passed up an invitation to attend a company-sponsored dinner that night.

Instead, she entered P.F. Chang’s China Bistro, did a quick scan of the group to find a friendly face, and was greeted by a man who gave her a warm smile. He turned out to be a University of Pennsylvania professor, and something he said would change her perspective and her life.

“Oh, let me get friends with that beautiful question,” Ghaznavi told the 180 attendees in her keynote speech at the 26th annual Women’s Leadership Colloquium. It was held Thursday at the University of Mary Washington’s campus in Stafford County.

She said she was feeling vulnerable because she’d just left a job she loved and needed a break, and feared that people wouldn’t talk to her at the dinner if she didn’t have an impressive job title. Instead, the question opened up a different conversational path, and soon she was sharing that her passion was to create learning spaces that bring people joy.

It turned out the professor was working on ways to make traditional education more creative. By the end of the dinner, he offered her a job.

“You never know who you’re sitting next to,” Ghaznavi said, “and what opportunities there are.”

The experience taught her the importance of showing up, she said, and applauded her audience for taking the time to attend the colloquium.

The daylong program with the theme of “Be Your Own Hero!” offered a variety of seminars on such topics as what authentic leadership is and why it’s important, leadership strategies for both emerging and experienced leaders, and ways to nurture the “superpowers” in other women. Attendees also had the opportunity to sign up for sessions with professional career coaches.

Ghaznavi, who owns a consulting business, also shared other lessons she’s learned on her career path since graduating from The College of William & Mary in 2007. She and her older brother, Shin Fujiyama, founded Students Helping Honduras in 2006 when he as a student at UMW and she was at William & Mary.

Their goal was to build schools to help the youth in that country who’d otherwise have no access to education. The program, which her brother still runs, has built more than 50 schools, including one that teaches English.

“I am so proud to say [Students Helping Honduras] has impacted thousands of lives both there and here,” she said.

It has been a learning experience for her as well, Ghaznavi said. She learned Spanish and how to negotiate contracts with the companies building the schools. She also started thinking about the curriculum the schools were providing, and if it was making learning fun.

She said that 50 percent of fifth graders feel stuck, 66 percent of college students have reported that they feel overwhelmed with studies, and 70 percent of adults in the workforce feel disengaged.

“When we feel stuck, it hijacks our ability to think creatively,” said Ghaznavi.

She’s gone on to make a career out of helping leaders take a step back from their job, reflect on their purpose and plan a path ahead that gives them joy.

After serving as managing director at the University of Pennsylvania’s Center for Social Impact Strategy, she went on to become vice president of The Future Project, a social enterprise on a mission to unlock possibility in people. She then became global director of training for Selina, a lifestyle, travel and hospitality platform with the goal of helping people engage with locals and fellow travelers.

Ghaznavi also shared that she is the daughter of Japanese immigrants who met on a ski slope in Nagano where her father was a ski instructor. Her parents began teaching her and her three siblings to ski when they were young, and she said her favorite moment was riding the lift to the top of the ski run with her parents. It was a time when they could examine how they’d done on their last trip down the slope and see the paths others were taking.

She called them “lift moments,” and asked the audience to take a few minutes to write down the answers to four questions and then share them with a person sitting next to them. The questions were:

For several minutes the room was silent, except for the sound of women writing furiously in journals provided in the colloquium swag bags. Then there was a noisy burst of conversation as they began sharing what they’d written. Several minutes elapsed before Ghaznavi asked if anyone would share their answers with the entire group.

When one woman said the exercise made her realize that she needed to create a better work and life balance, Ghaznavi told her to take out her smartphone right then and schedule time for herself on her calendar.

“It’s like you have a clear plan of action,” she said. “More ‘me’ time. Thank you for sharing.”