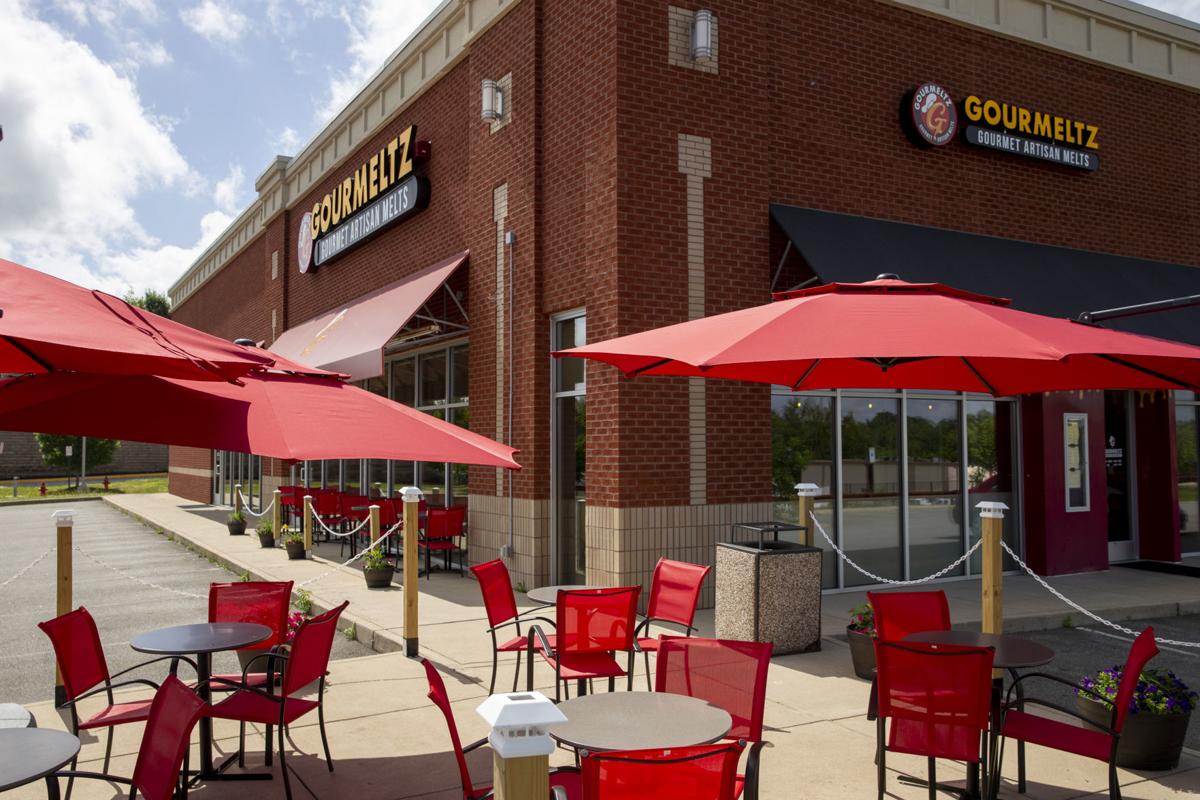 The Stricklands planted their business at Cosner’s Corner in a fast-growing part of Spotsylvania County. 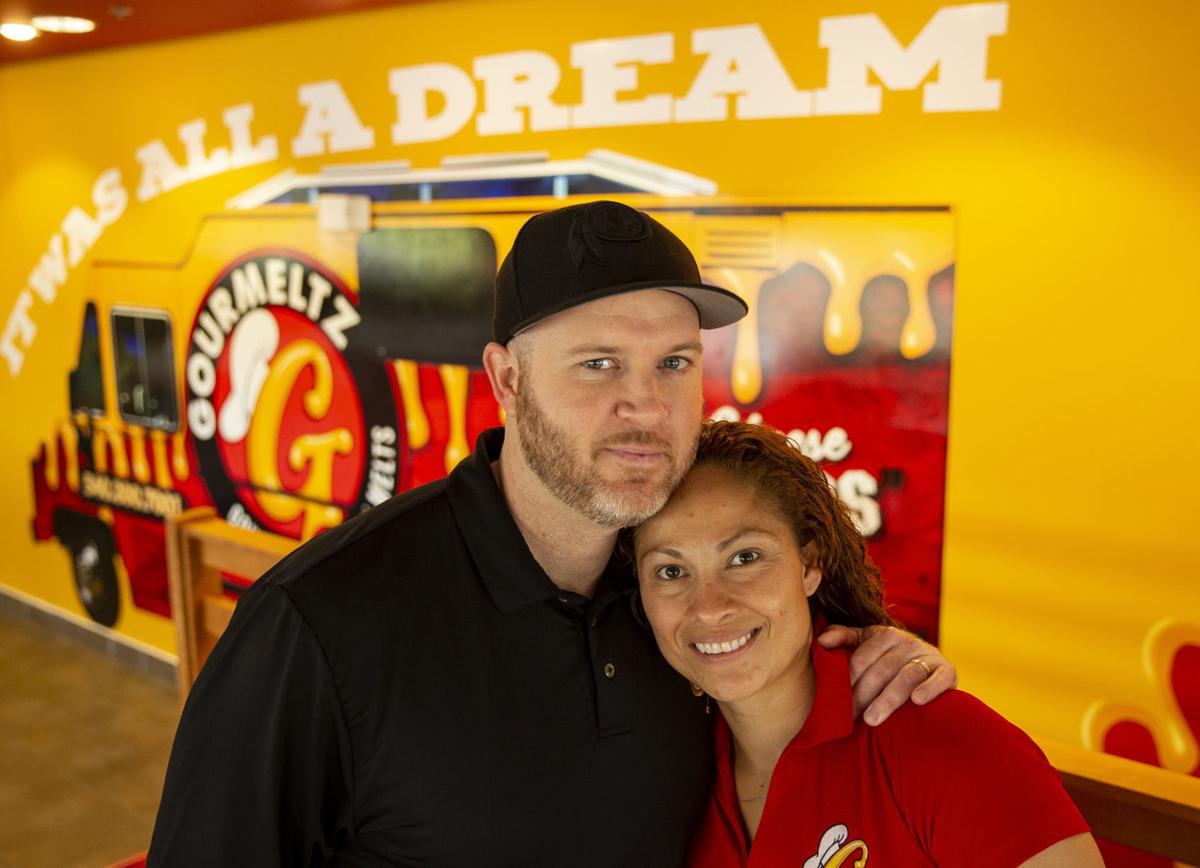 Matt and Marie Strickland have opened Gourmeltz, a brick-and-mortar version of their popular food truck.

The Stricklands planted their business at Cosner’s Corner in a fast-growing part of Spotsylvania County.

Matt and Marie Strickland have opened Gourmeltz, a brick-and-mortar version of their popular food truck.

Matt Strickland is a cheese artist.

The Fredericksburg resident and Army veteran describes it as a blank canvas for the gourmet melted cheese sandwich creations that he and his wife Maria began selling from their eye-catching red and orange Gourmeltz food truck in 2016.

“I wanted a food that I could create something different with that would bring back childhood memories,” said Strickland, who combined “gourmet” and “melts” to come up with the business’s name. “You can do so much with cheese. You can do something fresh and new that customers wouldn’t think of.”

Like piling mac and cheese on top of slow smoked pulled pork made with house barbecue sauce, for example. The Southern Cookout Melt, as it’s called, also includes sharp cheddar and caramelized onions, and is a customer favorite. They take a bite, he said, and go crazy over it.

“That’s what pushes us,” said Strickland, who is constantly thinking up new tasty combinations. “Those customers’ comments saying that’s the best sandwich they’ve ever had, and ‘I never would have thought of it.’ “

Business went so well that the Stricklands, who started Gourmeltz with some friends, added a second food truck in 2017. They sold both to open Gourmeltz restaurant in an outparcel in Cosner’s Corner shopping center. The sunny corner location sits on a hill, and customers eating inside or at one of the tables outside can see the tops of trees lining U.S. 1 toward Fredericksburg.

“It’s a great time to be in Cosner’s Corner,” Strickland said, noting that a Publix is expected to open in the shopping center soon and more people are moving into houses and apartments in the surrounding area. “It’s a great opportunity and a good spot. We didn’t want to be anywhere else.”

The restaurant’s cheery interior features a painting of a Gourmeltz food truck on one wall, framed “Rolling Stone” magazine covers on another, and seven large flat-screen TVs spaced around the room. Some of the TVs show sports while others play hits from the ’80s and ’90s.

Customers order at the counter, are given a number and a staffer brings the food to their table. It might be one of the “meltz with meat” selections, which include the Southern Cookout as well as the Chicken & Waffle Melt, which is drizzled with a house-made bourbon cinnamon maple syrup. The bourbon comes from A. Smith Bowman Distillery in Spotsylvania County because Gourmeltz uses local and Virginia-made products as much as possible.

“Not a lot of people are aware of it, but Virginia makes a lot of great cheese,” said Strickland, who gets his from Stonyman Gourmet Farmer in the Shenandoah Valley. “It stacks up to Wisconsin.”

Gourmeltz also sells “no meat meltz,” such as its classic grilled cheese made with a choice of any two cheeses. It also serves jumbo chicken wings that are smoked instead of fried, a variety of salads including the Veggie Protein & Greens made with a “chickpea power blend,” fried pickles, hand-made mozzarella sticks and “Tot’Cho’s.” This tater tot version of nachos comes topped with beef, nacho cheese, pico de gallo, jalapeños and sour cream.

Customers can also order grilled hot dogs with toppings from the Dog Fixin’s Bar, sides such as tomato basil soup and a fresh cucumber salad, or something from the kids menu.

Almost everything is made from scratch, down to the house-roasted ham and turkey. Strickland even taught himself how to smoke the wings.

“It was just me playing around with stuff,” he said. “If you’re passionate about something, nine times out of 10 you’re going to enjoy it and be good at it.”

Strickland grew up in Woodbridge in the same neighborhood as his wife. He enlisted in the Army when he was 17, and spent five years with the 25th Infantry Division in Iraq and Afghanistan before leaving to work for a private contractor providing support for the U.S. effort in Iraq in 2006. He began taking classes at Germanna Community College online while there, and finished his business administration degree at the University of Mary Washington after moving home in 2010.

He was also commuting to a job as an intelligence analyst at the Army’s National Ground Intelligence Center in Charlottesville during that time, but soon realized that he wasn’t cut out for an office job. He went back to Iraq to work for a different contractor for a couple years, then came back home to put his degree to use.

“The goal was always to open my own business,” Strickland said. “Cooking has always been my passion.”

He decided it would be smart to start out with a food truck, and got Pure Graphx in Stafford County to design and create the vehicle wrap. It made the truck look like melted cheese was dripping down from its roof, and bore the slogan “Like Grilled Cheese on Steroids.”

“People were initially intrigued,” Strickland said. “Once they tried the food, the food was so good that they were hooked.”

The Stricklands took that truck, and later the second one, to events such as Spotsylvania’s popular Food Truck Rodeo as well as locations from Williamsburg to Northern Virginia and as far west as Charlottesville. The business did well, but “the food truck game is tough,” he said. If they prepped the food for an event and it rained, they’d lose money.

Opening the restaurant seemed the logical next step.

“Instead of people chasing the truck, they come here chasing the cheese,” Strickland said. “We have walls and a roof, and people can enjoy eating here whether the weather is good or not.”

The couple have four young children, and created Gourmeltz as a fast-casual concept with families in mind. Adults can enjoy a Virginia wine, craft beer or cocktail made with Virginia spirits and listen to music spun by a DJ, for example, while their children play corn hole on Friday nights when the restaurant holds its free Cruise-In.

The restaurant’s full, walk-up bar has a dozen craft hard ciders and beers on tap that are hard to find locally. It also has an offsite license, so customers can bring growlers and have them filled with, say, something from Coyote Hole Ciderworks in Culpeper, Center of the Universe Brewing Company in Ashland or Hardywood Park Craft Brewery in Richmond. It also carries a beer made by Honor Brewing Company in Chantilly, an Army veteran-owned company that pays tribute to fallen service members and raises money for veterans charities.

Strickland said he survived two improvised explosive device, or IED, explosions, but some he’d served alongside in Iraq and Afghanistan did not or were severely wounded. He donates some of the proceeds from the raffle held during the Friday evening car shows to Operation Wounded Warrior, and wants to offer a free meal for wounded warriors once a month.

“I suffered from depression when I came back,” he said. “You have to find outlets to tame it. Building something from the ground up was that for me. It’s an adrenaline rush when people come in and tell you they love the food. It makes you feel OK. It definitely keeps me going.”