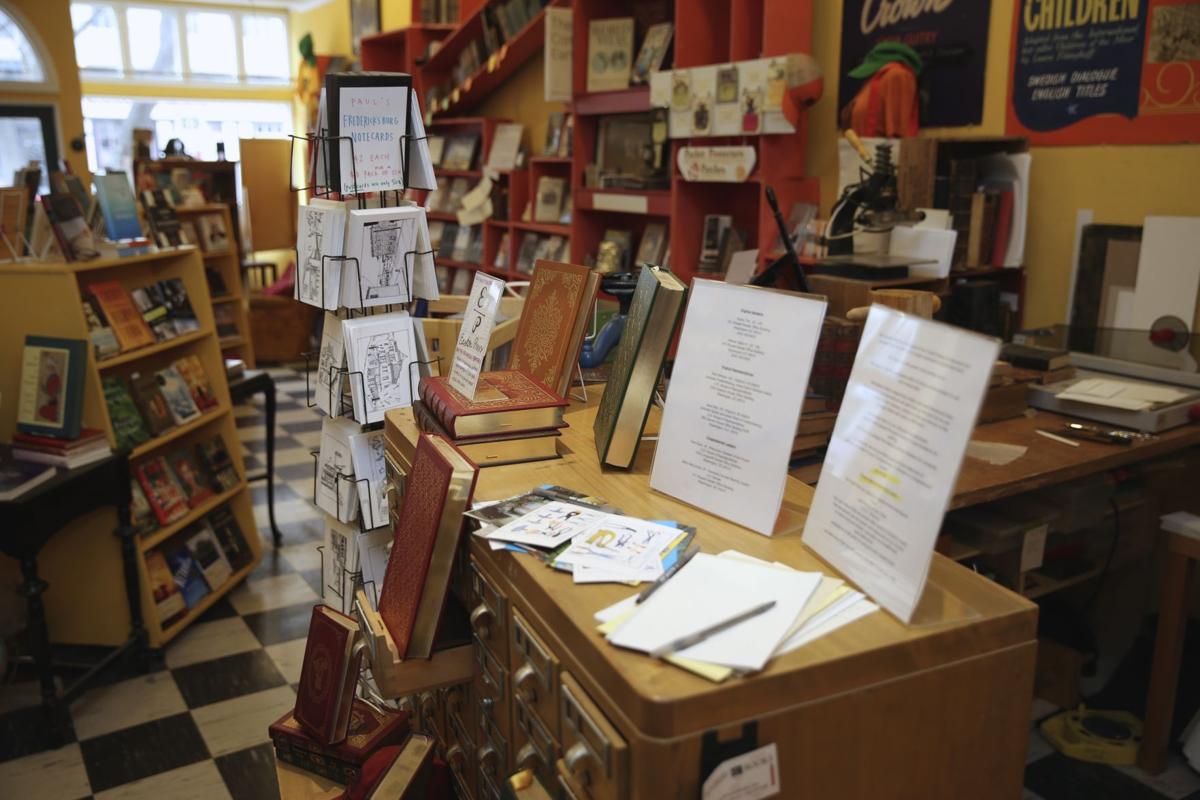 Riverby Books in downtown is not afraid to bring politics into the store. There is a station for people to write letters to elected representatives, and the owner welcomes debate. 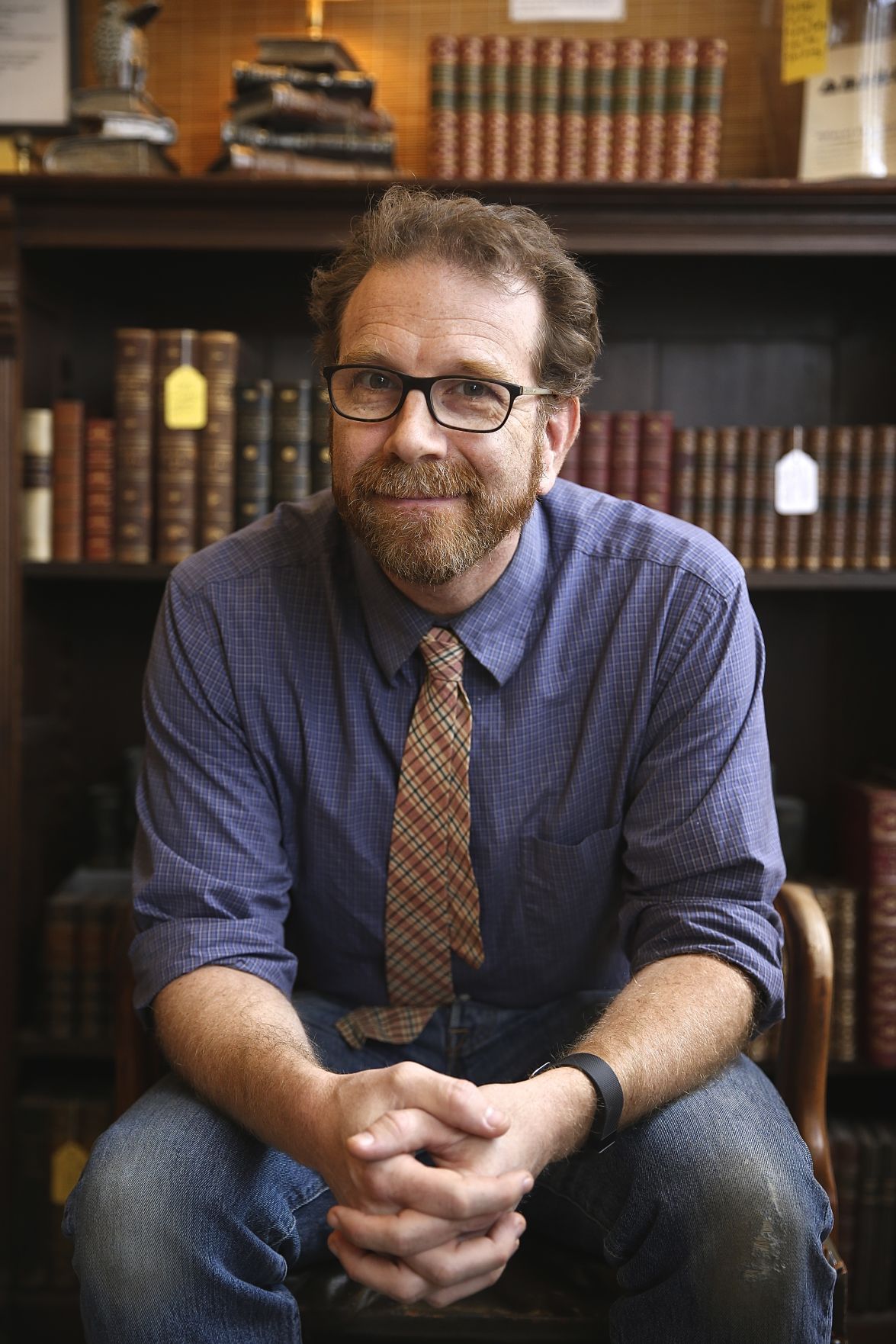 Riverby Books in downtown Fredericksburg has a station set up for people to write letters to elected representatives. Paul Cymrot (above) is the owner of the store.

Riverby Books in downtown is not afraid to bring politics into the store. There is a station for people to write letters to elected representatives, and the owner welcomes debate.

Riverby Books in downtown Fredericksburg has a station set up for people to write letters to elected representatives. Paul Cymrot (above) is the owner of the store.

“Please take a moment to write.”

It’s a plea that is simple, humble and like so few things in business: free.

The line is from a flier that recently went up at Riverby Books in downtown Fredericksburg, urging customers to stop for a moment and write a letter to their elected representatives, which the store will then send for no charge.

In times of strife, people find solace in vendors of the written word and in the words themselves, as evident by spiking sales of books like George Orwell’s “1984” and John Steinbeck’s “The Winter of Our Discontent,” and J.D. Vance’s “Hillbilly Elegy.”

“I’ve always believed bookstores to be safe havens for freedom of speech and expression; free postage is just a little nudge towards actually exercising that,” said Riverby owner Paul Cymrot. “I wrote the message after considering what role the store might play in the current state of the nation—advocate for civil discourse is always useful and is always the high ground.”

Over the past 20 years, Riverby has held voter registration drives, given discounts to customers who wear their “I Voted” stickers on Election Day, taken in-store surveys and used its window white board to promote community events.

Bookstores around the nation are taking a political stance since the emotionally charged November presidential election and consternation over presidential cabinet picks and executive orders.

Riverby’s Washington D.C., store displayed historic campaign memorabilia around the election. The store said on its website, “As the closest bookstore to the Capitol Building we simply couldn’t resist converting the front part of our shop into Election Central.”

News outlets have reported that all over the country, independent bookstores are joining the rising tide of political malcontents and urging customers to speak up.

Also in Washington D.C., independent bookstore Politics & Prose created a “Don’t Give Up. Stand Up. Read Up” book display to promote political engagement.

The New York Times reported that Broadway Books in Portland handed out free copies of Chimamanda Ngozi Adichie’s “We Should All Be Feminists” on Inauguration Day. The same story said Women & Children First in Chicago hosted a craft circle to knit pink hats before the Women’s March.

“As far as political engagement goes, it was never my intention for the store to be saccharine or neutral,” Cymrot said. “Holding one’s own belief is not the same as disparaging someone else’s. My customers understand that. I have my own opinions, and I respect the rights of my customers to have theirs. In fact, I would require it if I could; people who have no opinions at all or who have never paused to think something through make me nervous. I’ve spent many happy hours debating differences with customers, but only a few mediocre minutes echoing the entirely like-minded.”

Riverby and its community of independent bookstores are the exception to the rule when it comes to political engagement in small businesses, though.

“While small businesses are remarkably involved and engaged in the political process, their political positions and ideologies are as diverse as the economy they fuel,” a summary of the survey said. “What we found underscores the real-world implications of the growing partisan rancor in Washington, D.C. and beyond: a less involved small-business community increasingly frustrated with their elected officials.”

Opinions about whether to engage customers in political speech are varied among disparate types of businesses in Riverby’s neighborhood.

The store has hosted “action meetings,” which have been organized across the county after the Women’s March to keep the momentum of political activism going.

Among those meeting topics was knowing who to write to in Congress. The couple advertises the meetings over Facebook, but not through the business.

“A lot of people we didn’t know came out,” Gabriel Pons said. “That was refreshing.”

He said it is hard as a business owner to figure out how outspoken to be. During the election he regularly retweeted ideas he agreed with through the business’ Twitter account. He has pulled back a little since then, saying, “I don’t want to exclude anyone from enjoying the artwork because they feel differently.”

But being an artist, it’s hard to shield his true political feelings. Both he and Scarlett have immigrant parents “so that’s a cause very close to us,” he said, and his next piece is a riff on the Statue of Liberty.

“There’s a high level of anxiety and depression among the artist community following the election that will soon take center stage,” he said.

But for Pons, the most important thing is not overshadowing the business’ mission to promote creativity, community and learning around art.

Other businesses downtown shy away from taking a strong stance.

At the Virginia Deli on Caroline Street, owner Linda Freeman said her eatery is “patriotic but not political.”

Many of the menu items are named after famous historical figures like George Washington and Stonewall Jackson. Others invoke local landmarks like Kenmore or Ferry Farm.

“I just feel that politics don’t belong in a restaurant,” she said. “One person might disagree and I don’t want any hard feelings coming out of here. We staff members don’t voice our political opinions here.”

She said the most contentious conversations in the shop come from the “George Ate Here” sign outside.

“George Washington, no,” she said. “But we have customers named George. Like, George Hope who used to own the Blarney Stone would stop by here.”

“Unless I know someone personally, I won’t talk about it,” he said. “Otherwise I try to steer clear. I don’t want to alienate customers. We need every one of them.”

But at nearby Riverby, Cymrot hopes customers will stop by to chat with him about politics.

“I’m happy to chat about current events, about Mark Twain’s views on slavery, on the authorship of Shakespeare’s plays, and about whether the Captain Underpants books are better or worse than the Dork Diaries,” he said. “Running a bookstore in a town like Fredericksburg that is willing to support it is a lucky thing indeed.”