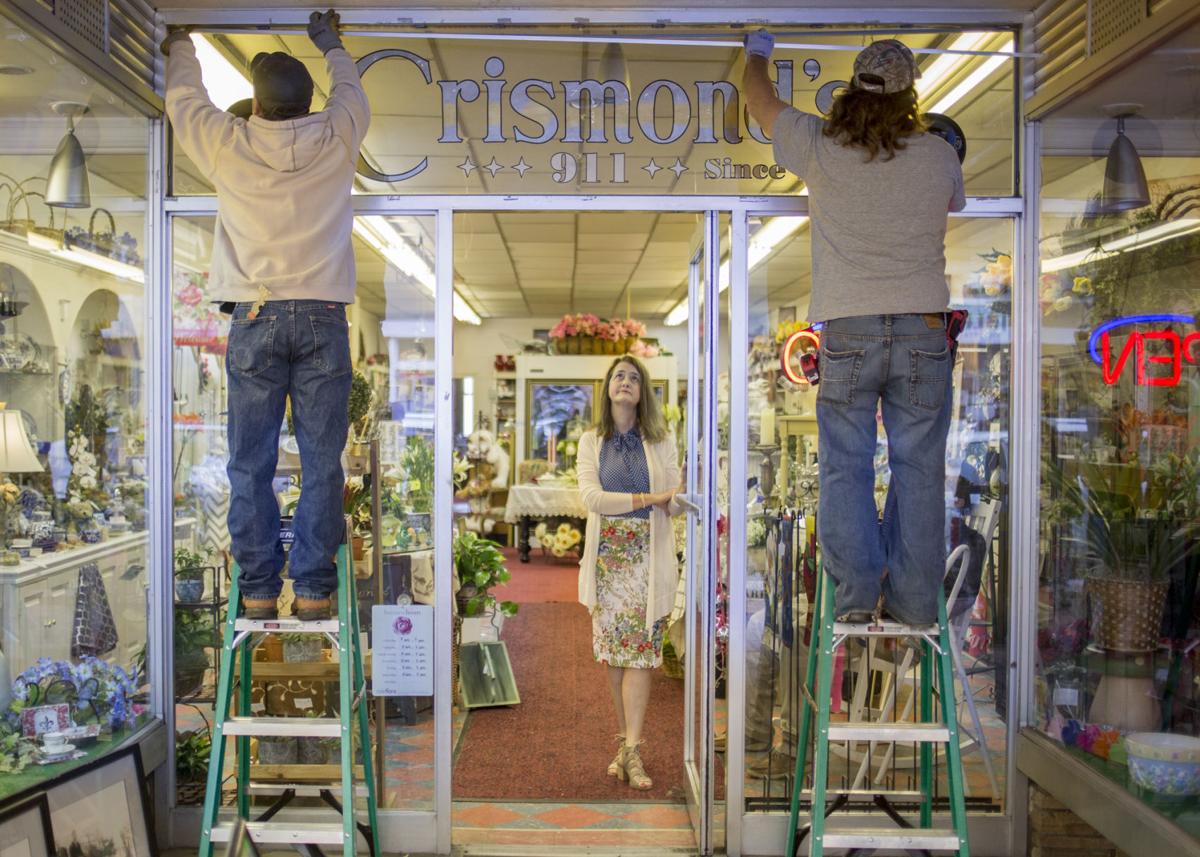 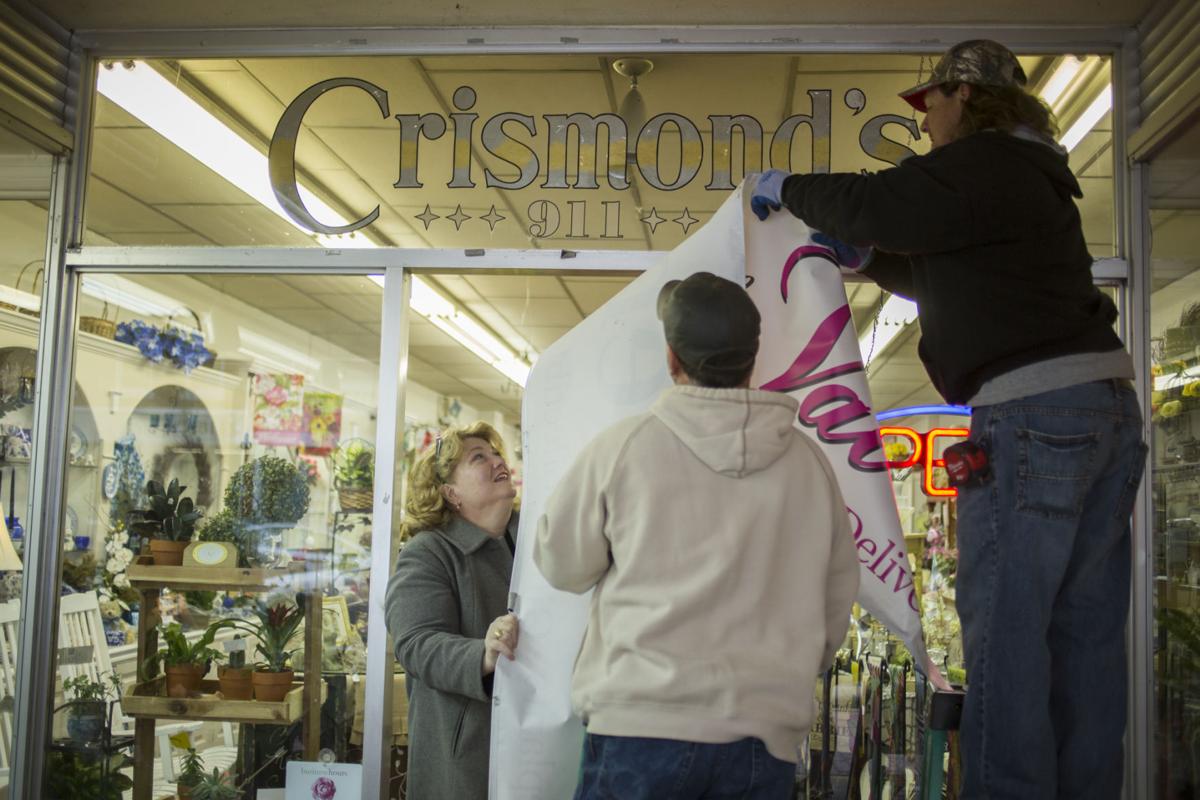 Val White, owner of Flowers by Val, and Bo Wallace (center) and Ron Thomson from White Supply and Glass take down the store’s temporary sign. 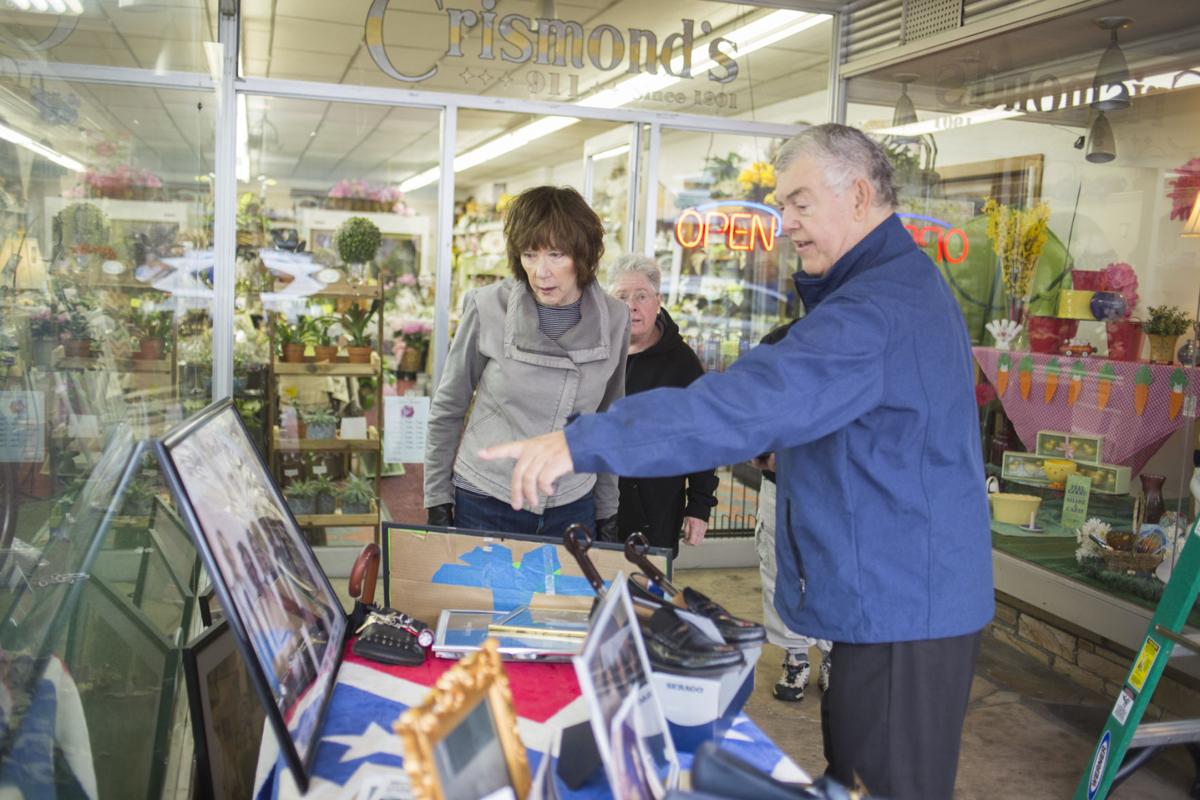 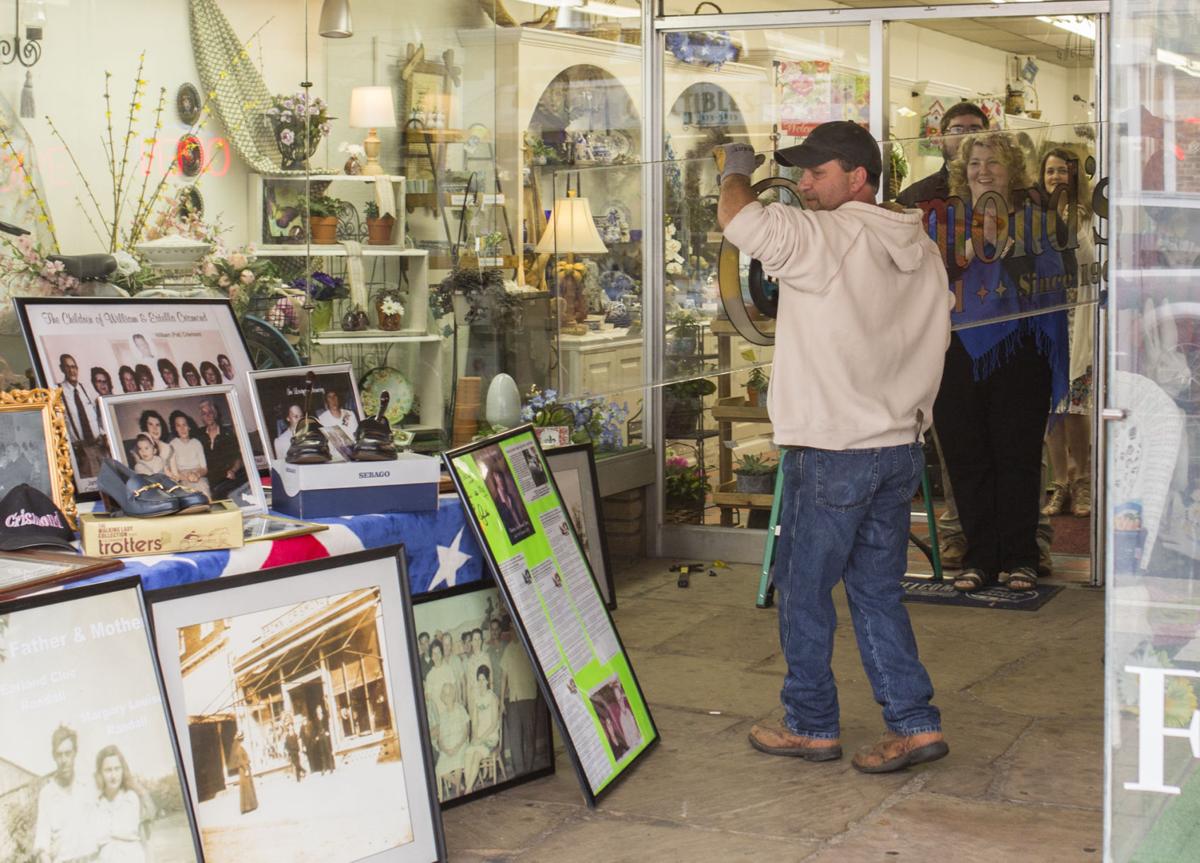 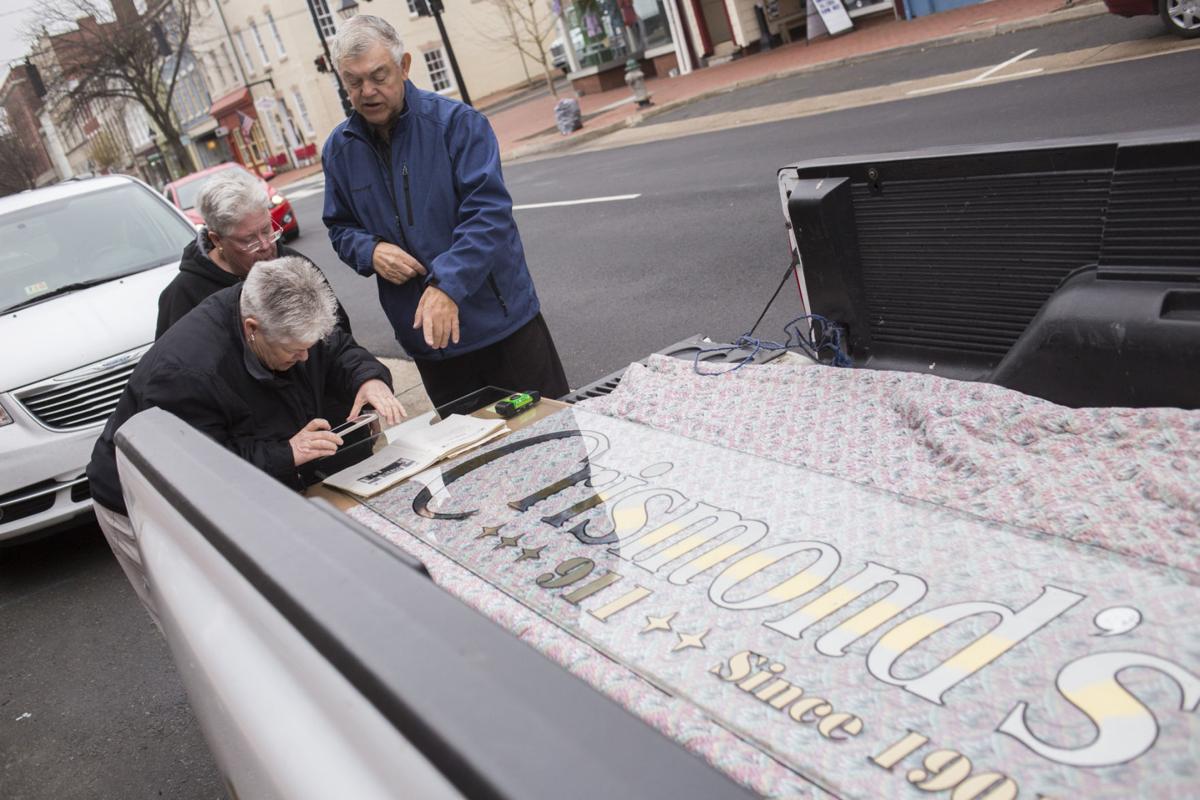 Charles Randall shows Crismond family memorabilia to relatives Janet Crismond, center, and LaPointe Crismond, left, outside Flowers by Val, which once housed the Crismond’s shoe store in Fredericksburg, Va. on March 27, 2017. Val White, owner of the flower shop was replacing the window and gave the old Crismond’s glass to the family. 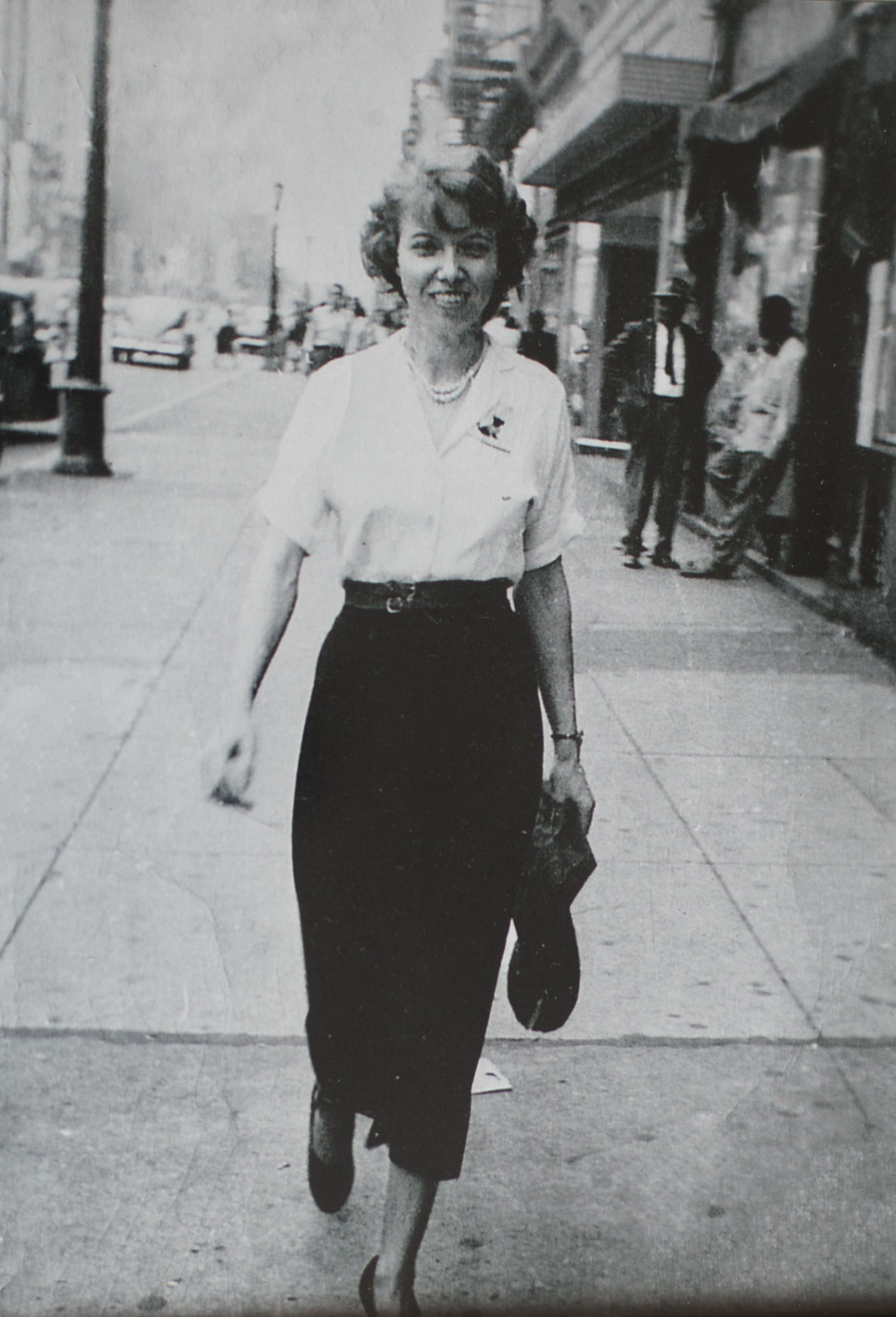 Val White, owner of Flowers by Val, and Bo Wallace (center) and Ron Thomson from White Supply and Glass take down the store’s temporary sign.

Charles Randall shows Crismond family memorabilia to relatives Janet Crismond, center, and LaPointe Crismond, left, outside Flowers by Val, which once housed the Crismond’s shoe store in Fredericksburg, Va. on March 27, 2017. Val White, owner of the flower shop was replacing the window and gave the old Crismond’s glass to the family.

For a moment at 911 Caroline St. last week, a fragile piece of downtown business history seemed close to shattering.

The etched glass window saying “Crismond’s Since 1901” was removed from the building and given to the Crismond family: sisters LaPointe Crismond and Janet Crismond and cousins Charles Randall and Cary Howard.

They watched as workers from White’s Supply & Glass removed the old window and replaced it with glass featuring the building’s new shop name, Flowers by Val.

The old glass was so cemented in place that it took hammers and crowbars to release from its molding.

Flowers by Val owner Valerie White noted that its refusal to give up was a good metaphor for the building’s longtime owner and local businesswoman, Marguerite Cecilia Mills. Mills died in November, leaving behind her commercial properties and a legacy of quietly beautifying the city of Fredericksburg.

Even before Brown & Crismond’s opened, the location sold shoes. A John C. Wells Shoe store was located at 911 Caroline St. as early as 1883.

Local businessman Joe Wilson purchased the building from the Mills Estate, along with the other property owned by Mills at 919 Caroline St.

Randall took some mementos with him: a pair of penny loafers, the Crismond’s safe, H.F. Crismond Jr.’s discharge papers from the Army after World War II and the window. The Crismond sisters also took home shoes, as well as photos kept in the building for years. The items will go on display and be given out at the Crismond family reunion in July.

Without Mills, Randall said, the family wouldn’t have all of the pieces from the Crismond’s store intact.

When White leased the building, all the shoe inventory remained. She remembers coming to the store as a child to get shoes and gum from its gumball machine.

She called Mills a savvy businesswoman who she hopes to take after.

“As a child, I was intrigued by her,” White said. “She was quiet and humble. I don’t think people know how instrumental she was.”

“I remember her marching around town watering and preening flowerbeds,” she said.

Mills, 92, died Nov. 27. A Front Royal native, she was a graduate of Warren County High School and Richmond Professional Institute.

Mills moved to Fredericksburg in 1948. No one seems to know how she got here. Crismond might have recruited her from a department store in Richmond, or she might have come for further education and stayed for the job.

She is survived by her sister and numerous nieces and nephews.

“She spent a huge amount of time gardening, planting in the tree wells, and decorating downtown,” said Jerry Ulman, owner of Ulman’s Jewelry on the same block. “Around Christmastime, she gave out the decorations and put a priority on everyone else before even decorating her own shop.”

Bill Garnett was Mills’ friend and confidant for years. He’s not sure how she got here, but said once she arrived in Fredericksburg, she made it her own. He and his wife, Sherry, managed her affairs in her later years. Garnett described her as private and self-sufficient. She never married or had children. He also noted her volunteerism and small acts of kindness.

“If a poor family came in and couldn’t afford it, she still fixed them up with shoes,” he said.

Bob Whittingham, owner of Whittingham, said she did things “the way Marguerite thought things should be done.”

A longtime friend, he called her a gracious lady who was ahead of her time. For example, even though she was already elderly when the technology came out, she had a cellphone before anyone else he knew.

Mills was honored by the city multiple times for her efforts to spruce up downtown, including being awarded the Clean and Green Commission’s “Golden Broom Award.” A 1982 article about Mills being recognized for her efforts said she “is largely responsible for the attractive display of flowers and plants.”

“It’s just something I do because I enjoy it,” she said in a 1985 article, displaying her humble and private nature. “It’s nothing special.”