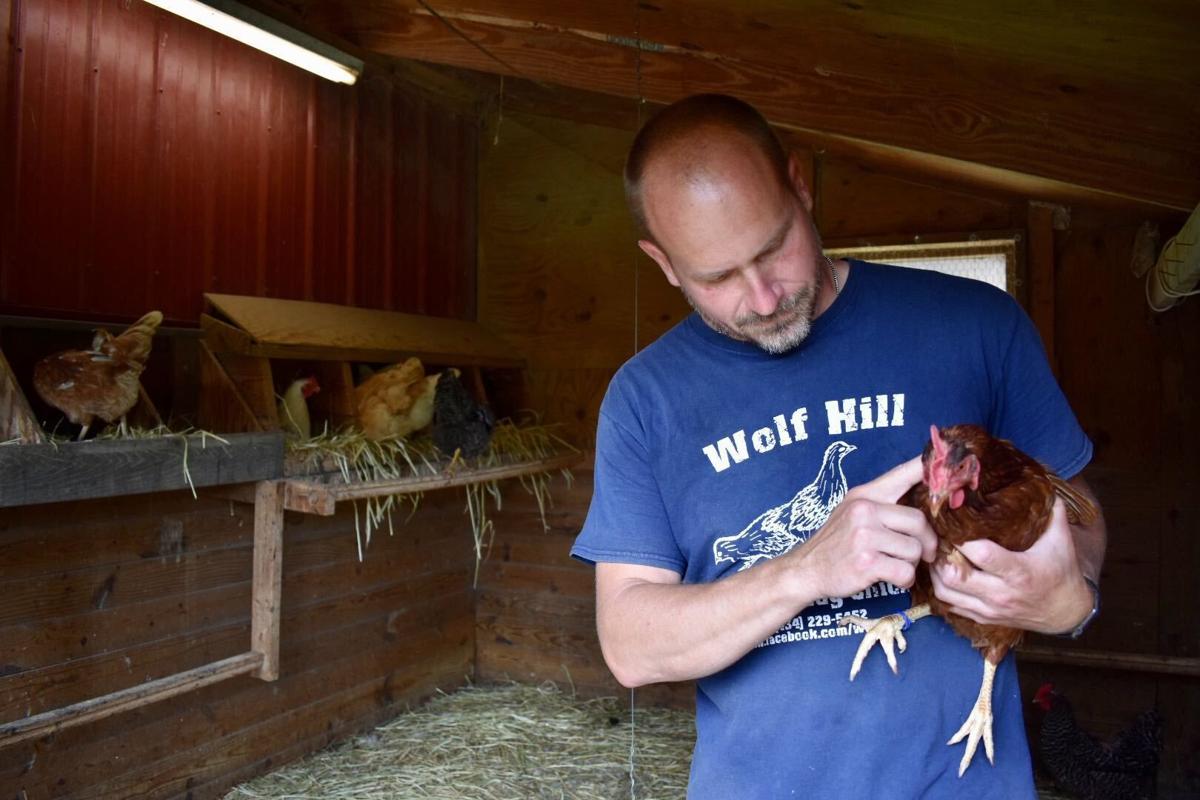 Rodney Chrisman of Wolf Hill farm in Bedford County said his chick sales have grown by 200% during the pandemic. 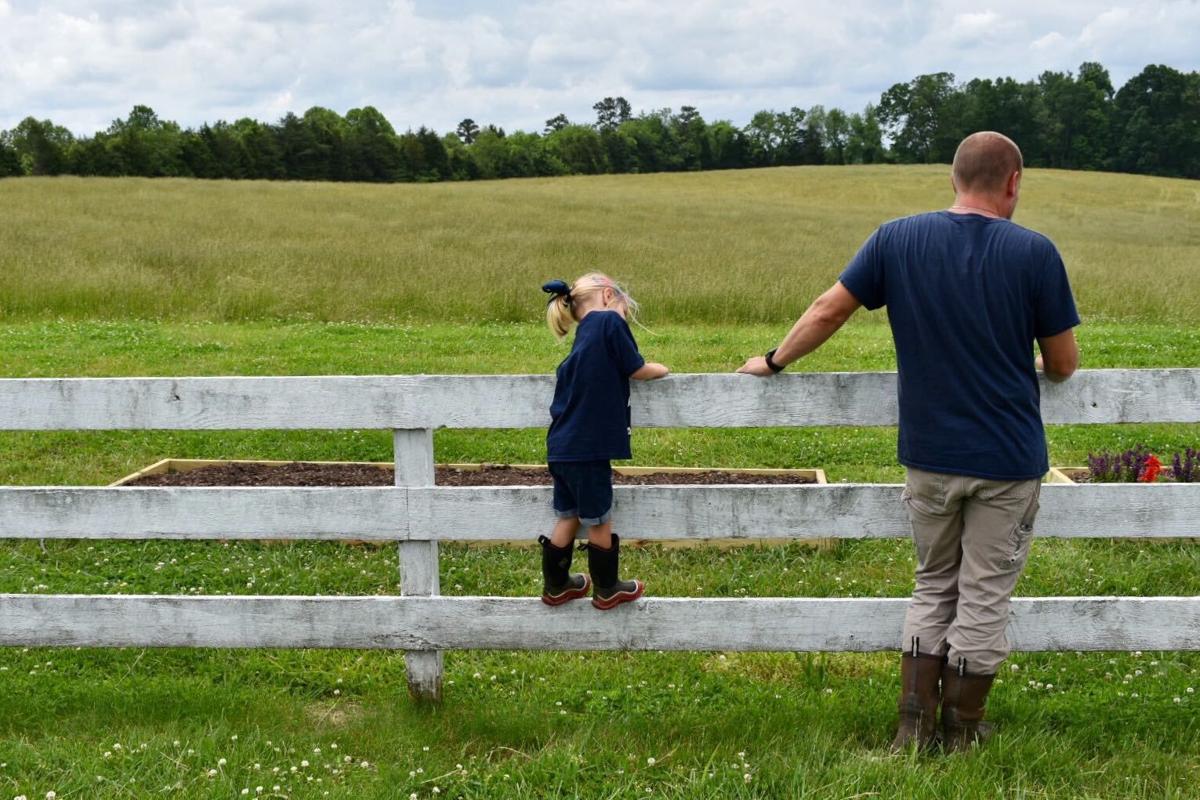 Rodney Chrisman and his youngest child, Emarie Eden, stand on a fence at Wolf Hill farm in Bedford on May 26, 2020. 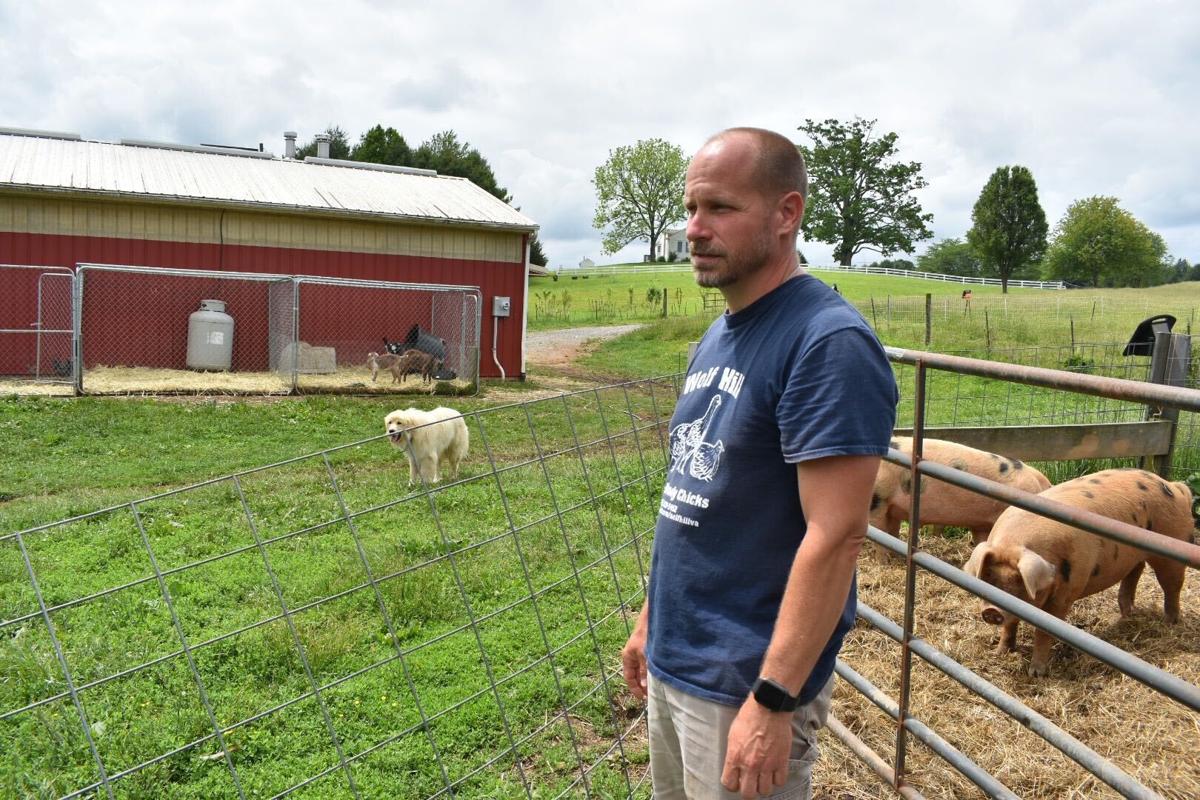 Rodney Chrisman stands at Wolf Hill farm in Bedford on May 26, 2020. 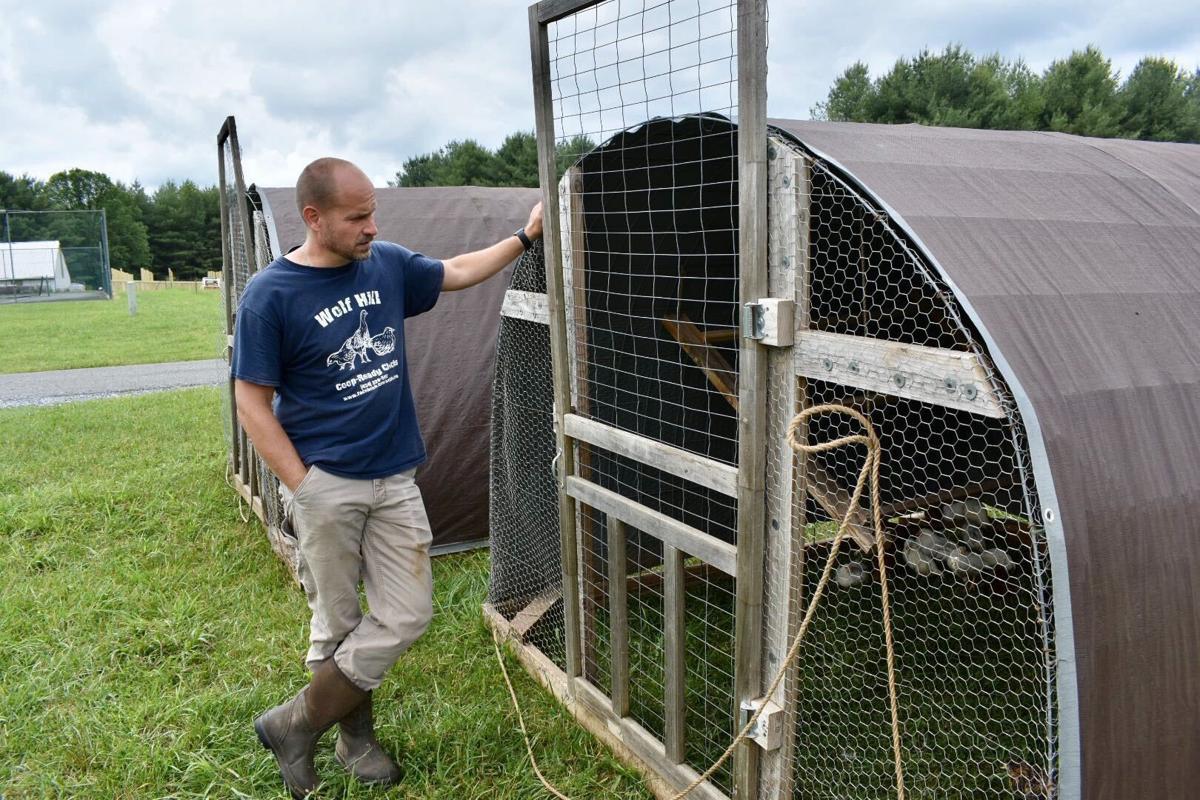 Rodney Chrisman leans on a chicken coop at Wolf Hill farm in Bedford on May 26, 2020. 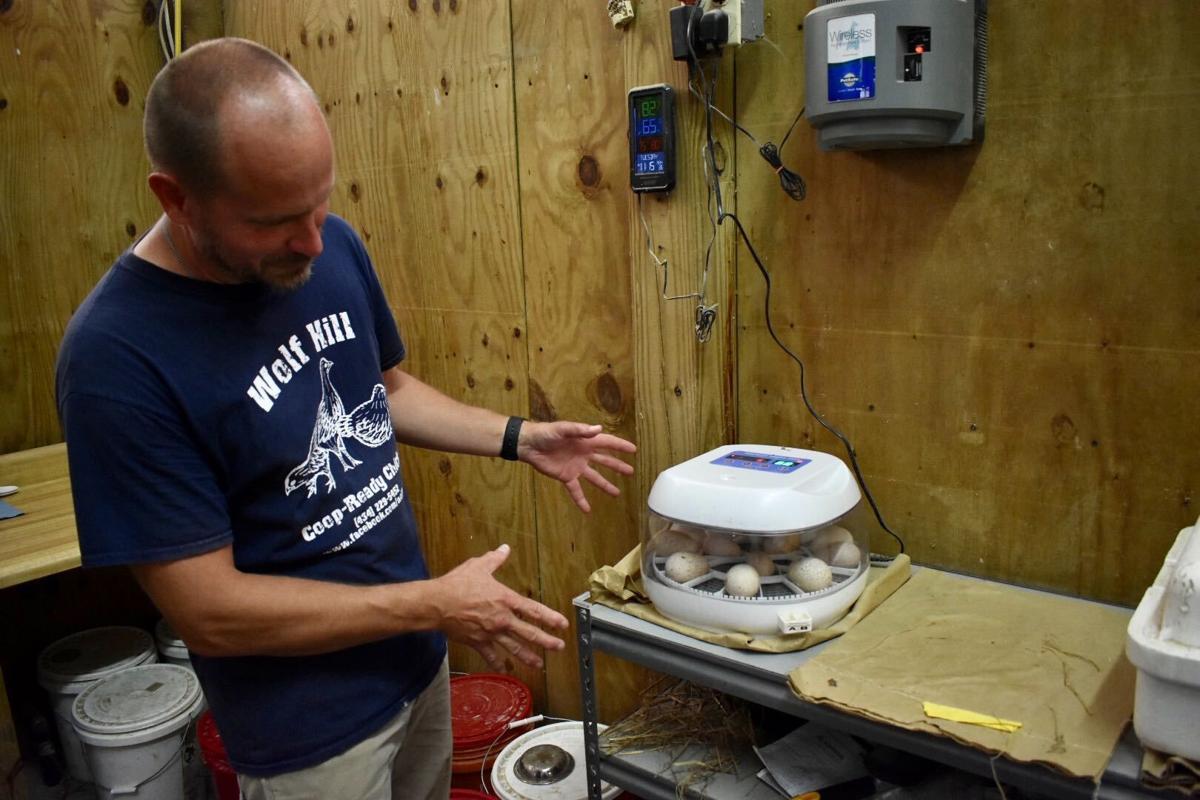 Rodney Chrisman displays an egg incubator at Wolf Hill farm in Bedford on May 26, 2020. 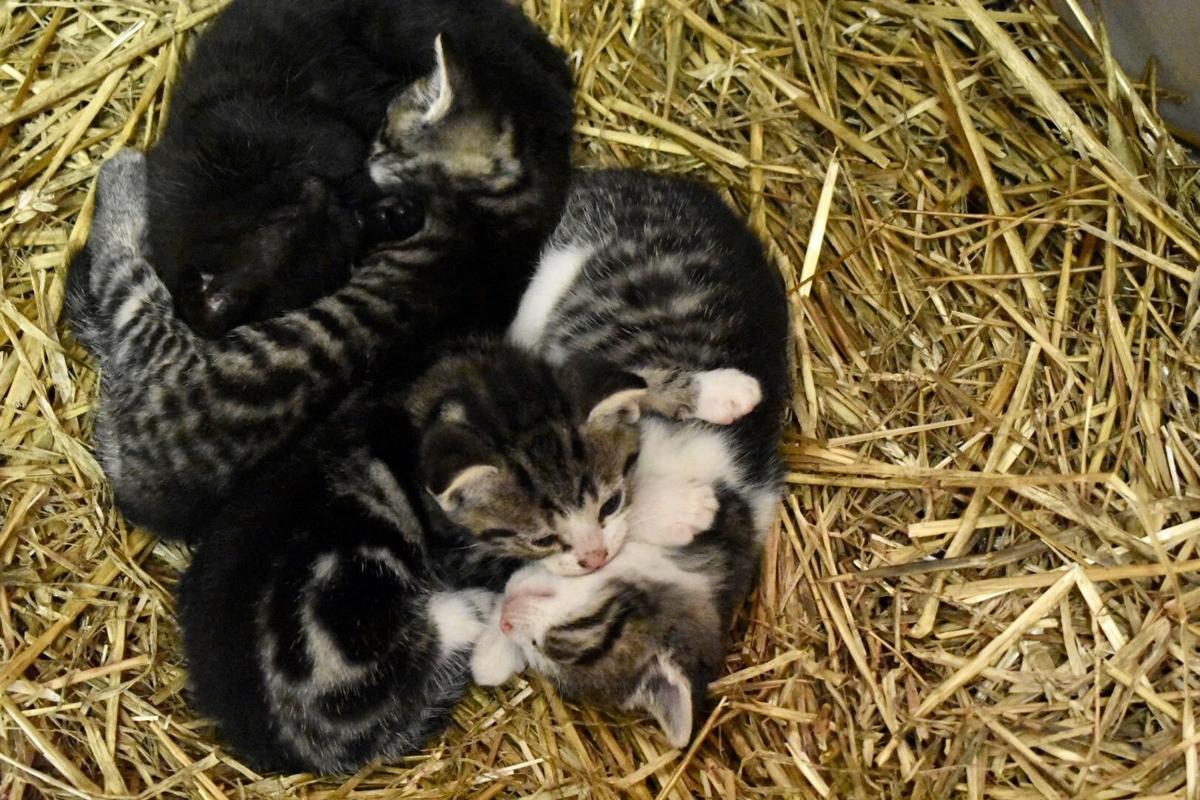 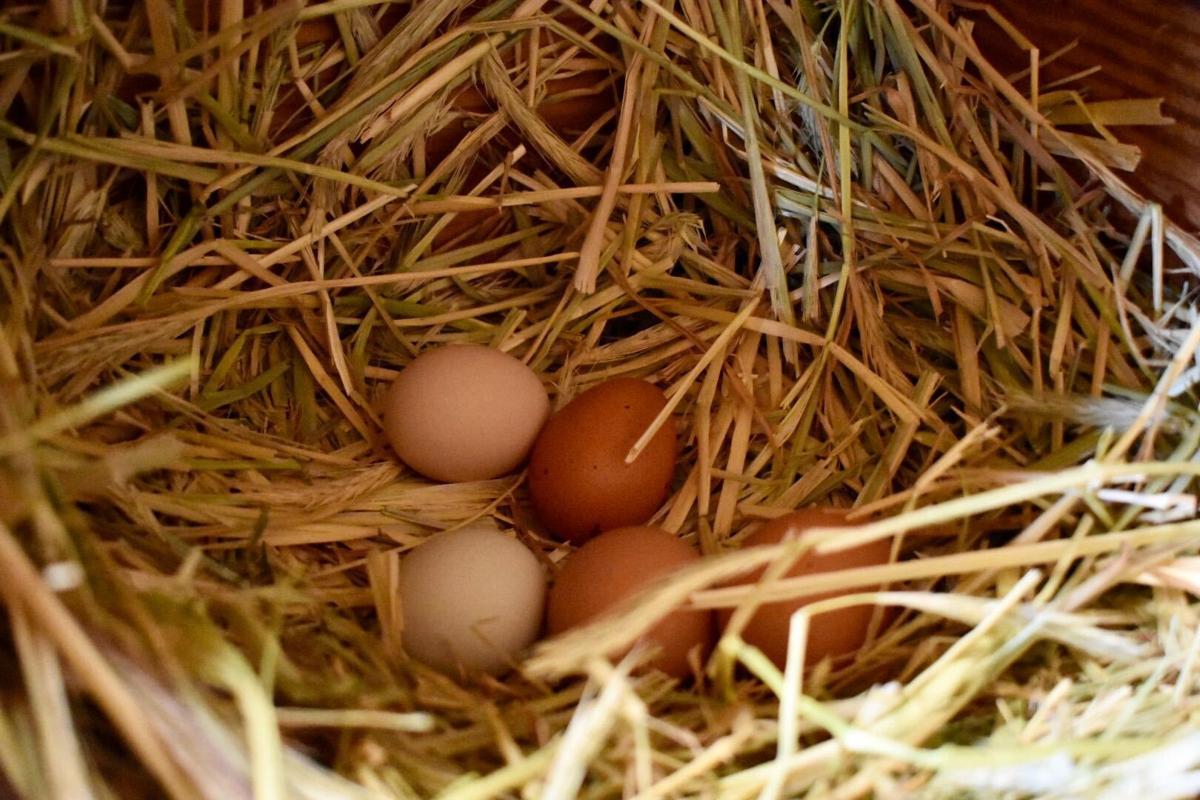 Rodney Chrisman of Wolf Hill farm in Bedford County said his chick sales have grown by 200% during the pandemic.

Rodney Chrisman and his youngest child, Emarie Eden, stand on a fence at Wolf Hill farm in Bedford on May 26, 2020.

Rodney Chrisman stands at Wolf Hill farm in Bedford on May 26, 2020.

Rodney Chrisman leans on a chicken coop at Wolf Hill farm in Bedford on May 26, 2020.

Rodney Chrisman displays an egg incubator at Wolf Hill farm in Bedford on May 26, 2020.

BEDFORD — In a wood and wire coop, pecking through the grass and airing their tiny, feathered wings, are the unexpected victors of recent months.

Since the coronavirus pandemic seized the country, stifling the economy and forcing countless Americans into isolation, its presence has rendered some resources invaluable. Things like toilet paper, Lysol wipes and hand sanitizer flew off the shelves, and for a few weeks, some grocery store stocks ran scarce.

But the pandemic had another Midas touch effect: turning the backyard chicken into living gold.

Hatcheries across the country have reported spiking sales, and the Lynchburg area is no different. Local farmers who breed chicks can’t keep up with the high demands.

Some farmers, like Rodney Chrisman of Wolf Hill farm in Bedford County, said his chick sales have seen a 200% increase.

There are days he sells more than 500 chicks from morning to milking time in the evening. Even when he’s sold out, there’s dozens more people waiting for him to have chicks back in stock.

Like many other farmers, he said it is likely a result of COVID-19. People are realizing that they are more food-insecure than they thought, as the pandemic disrupts the chain of supply that funnels basic necessities — such as milk, eggs and meat — to grocery store shelves.

He also believes people are becoming more aware of how animals live in industrial systems, and are turning toward homesteading strategies to provide for themselves and their families.

Homesteading is a lifestyle of self-sufficiency, and often includes subsistence agriculture, like growing fruits and vegetables, and raising chickens or other animals for food.

In late May, Chrisman leaned against one of his mobile coops, watching a huddle of downy gray Lavender Orpington chicks scrabble through the grass.

The 86-acre farm of Wolf Hill is a veritable Noah’s Ark. It seems like there are at least two animals of every kind — from chickens, geese, turkeys and ducks, to cows, goats, pigs, and even a small wooden hutch of bunnies. A litter of kittens nest in a pile of hay in the barn, and a massive Great Pyrenees, Anatolian Shepherd mix named Thor stands guard over the flock.

Like a Russian nesting doll, turning any corner revealed another layer of the farm’s many enterprises. Not content with simply operating the coop-ready chick operation, what he called the farm’s primary endeavor, Chrisman said he likes to try as many things as possible, and see what sticks.

Though Chrisman considers what they do more farming than homesteading, he said that diversifying your skill set is an essential part of homesteading strategies.

“If you’re going to make it work, you have to be willing to mess up,” Chrisman said. “And you’ve got to try a lot of things to see what you like, and what you’re good at.”

Todd Scott, an agriculture agent for the Campbell County Cooperative Extension, said the past few months have been almost like “a homesteading revolution.”

He said he has friends living in subdivisions suddenly talking about raising chickens, with even more people interested in gardening or buying meat directly from the farm.

Scott, who raises beef cattle on the side, said he usually sells only to friends and families. Any other year, he might make a post on Facebook, and sell off the meat over the course of a month, hoping to break even.

This year, he sold it all in two hours, and has more people still calling. He’s sold out of his beef a year in advance.

COVID-19 caused more people to think about where their food is coming from, Scott said, and has gotten people back into buying local.

For some, like Lily Wilmoth, the wake-up call came years earlier.

She and her husband, Josiah, live on a couple of acres in Hurt, where they have close to 50 chickens, five goats and a sheep.

Wilmoth runs Hearth & Homestead, and makes soaps and body products from all-natural ingredients, many of which are homegrown, to sell at farmers markets and around the community.

She also has friends who live in the city and suburbs suddenly expressing interest in homesteading — looking to raise chickens and plant vegetable gardens and fruit trees. She’s even seen a spike in people reaching out to area farmers markets, and supporting local growers.

“People realized you can’t always rely on big ag to sustain your needs. Especially if we are going to remain in a recession for any length of time,” Wilmoth said.

According to Tony Banks, a Virginia Farm Bureau Federation commodity marketing specialist, the pandemic has demonstrated to people the food distribution system is highly efficient and highly specialized, and how quickly it can be disrupted.

The department has noticed the trend as well — the spike in backyard chicken sales coming hand-in-hand with disruptions in the supply chain for commercial poultry operations.

Egg prices soared as retail sales hiked, and many local groceries were forced to limit the number of cartons of eggs consumers could buy.

David Knopf, a regional director with the U.S. Department of Agriculture national agricultural statistics service, said a report in March showed Southeast Region wholesale egg prices had peaked at $3.02 to $3.08 per dozen. Last year at this time, they were 53 cents to 56 cents per dozen.

The report attributed it to a recent wave of consumer panic buying.

In the past few months, Banks said people began to look to local farmers markets to fill their needs, but he said it’s too early to know if this is going to be a “blip” or the beginning of a lasting impact.

“Once you get COVID-19 three or four years in your rear-view mirror, it will be interesting to see what happens,” Banks said.

Jamie Sligh, owner of Sligh’s Feed & Supply, which opened on Wards Road in Rustburg earlier this year, said the hatcheries that supply him say they haven’t seen sales like this since the Great Depression. Some are up over 900%.

Sligh said he doesn’t see it slacking up.

“I don’t know if scared is the word, or just smart,” Sligh said. “My gut feeling is that it’s going to go like this for at least a couple years. I really, truly feel that people are going to stick with it.”

Sligh said he sold more than 1,000 chicks in a 30-day period, and items like chicken “starter kits” are on back order at the factories. Many of the buyers are first-time owners, and chicken wire and other supplies are becoming hard to find as they sell out in area stores.

Over at the Southern States Bedford Cooperative, the phone has been ringing off the hook. Susan Epperly can’t keep up with the orders coming in. She said everyone has gone into survival mode, and, like Sligh, she’s seeing a lot of people who have never raised chickens before scrambling to buy chicks.

At the cooperative, they do “chick days” twice a year, where they usually sell between 400 and 500 chicks. Currently, they have over 1,100 chicks in store, 95% of which are preorders.

She had to hop off the call fast. A girl had just walked in to pick up 40 chickens.

Though it’s hard to tell if the spike in sales is the beginning of a new lifestyle or a pandemic-driven trend, some farmers like Chrisman love what they do, and hope to see it continue to grow. Even with hundreds of chickens on the farm at any given time, he’s always looking to do more.

Chrisman said the pandemic is a hit the food system is likely to feel for a long time.

“But for this kind of agriculture, I think things are headed the right way,” he said.

“There has been a growing awareness for years of people saying, ‘I don’t want to participate in the industrial food system, I want to buy local.’ I think the coronavirus put that on steroids.

“A lot of people who never thought about it, suddenly thought it would be nice to have 12 chickens in the backyard.”