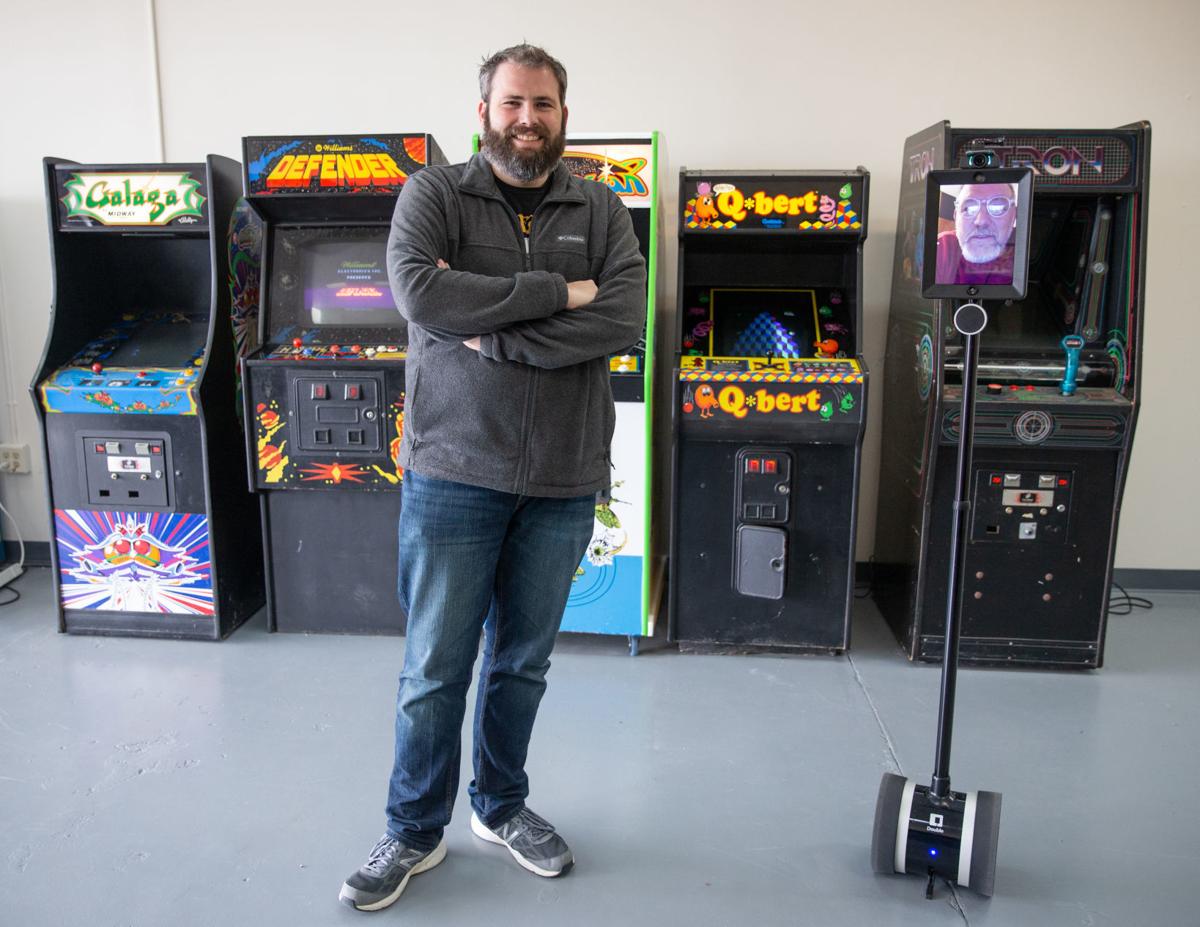 Tim Owens and Jim Groom (via video) talk about their plans to open Reclaim Arcade. 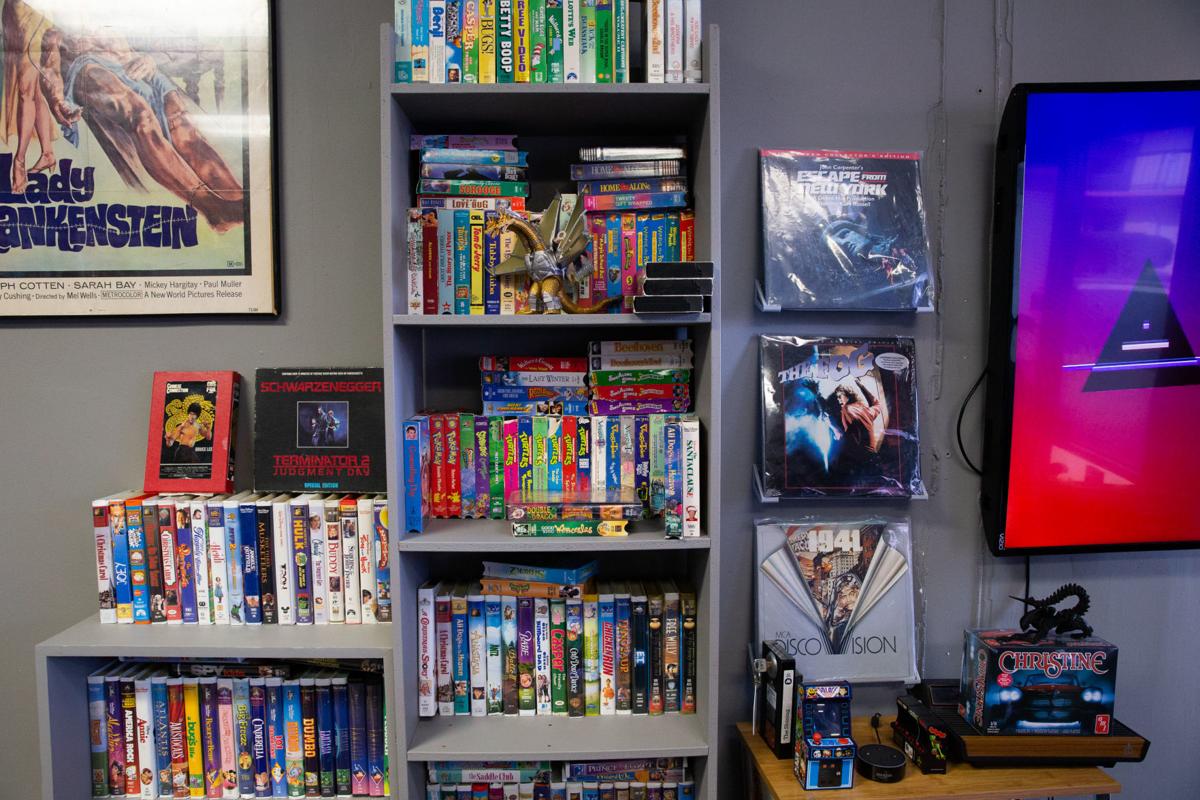 The ‘barcade’ will be a retro-themed 1980s arcade that also serves food and alcohol. 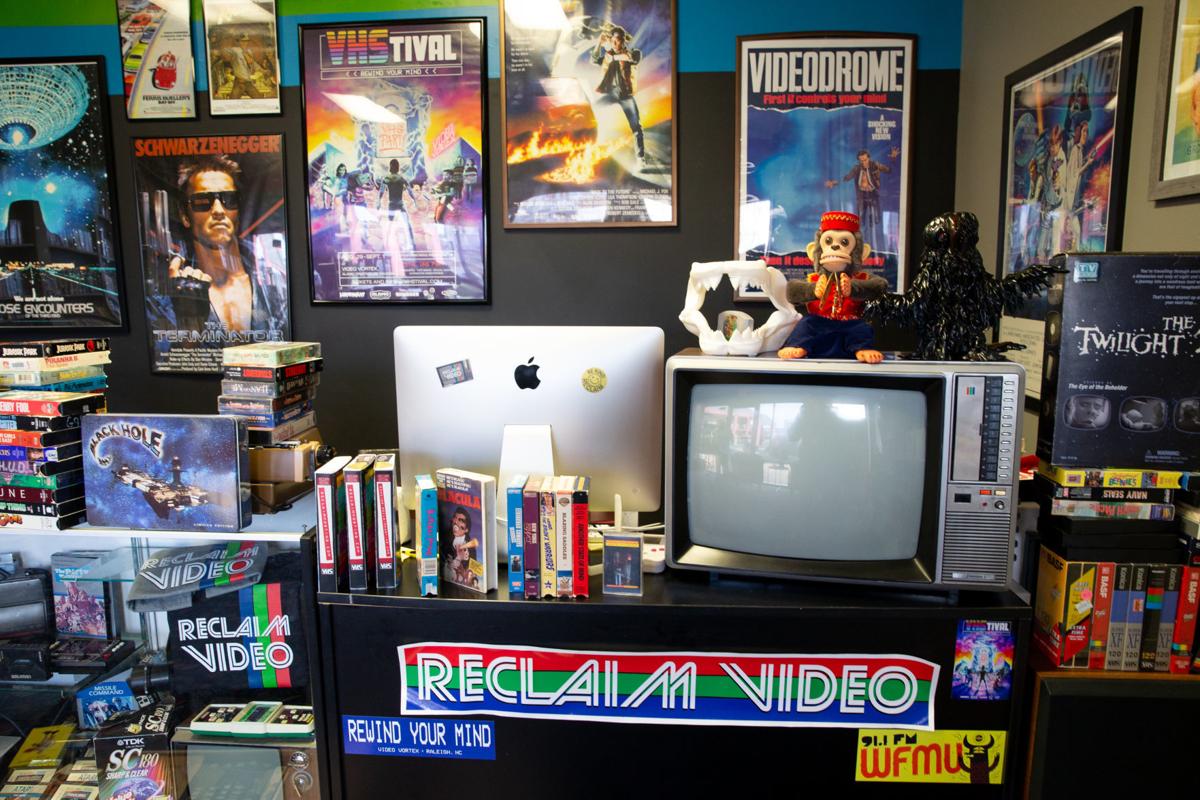 Reclaim Arcade is an offshoot of Reclaim Video, a movie rental outlet and entertainment space decorated with all the trappings of a 1980s living room. 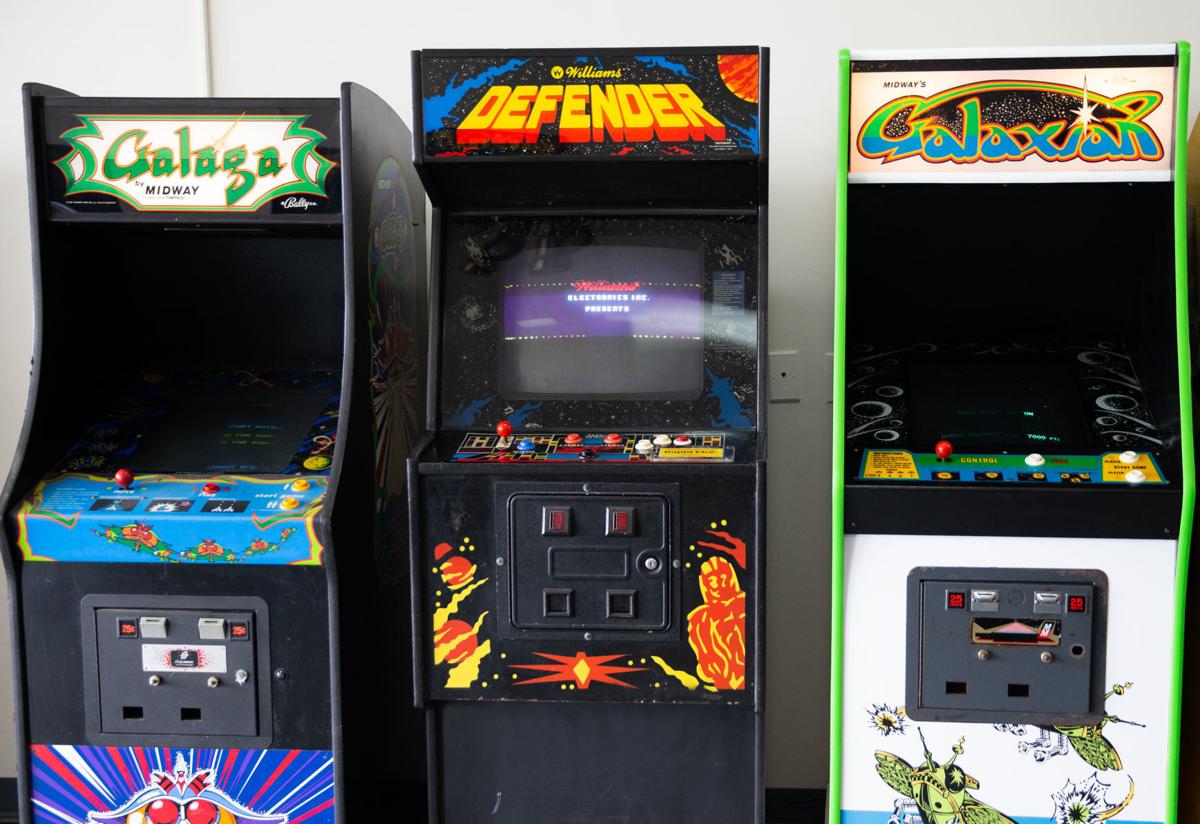 Reclaim Arcade, a ‘barcade,’ will feature classic games such as Galaga, Defender and Galaxian.

Tim Owens and Jim Groom (via video) talk about their plans to open Reclaim Arcade.

The ‘barcade’ will be a retro-themed 1980s arcade that also serves food and alcohol.

Reclaim Arcade is an offshoot of Reclaim Video, a movie rental outlet and entertainment space decorated with all the trappings of a 1980s living room.

Reclaim Arcade, a ‘barcade,’ will feature classic games such as Galaga, Defender and Galaxian.

A chance to play classic arcade games during a break at a conference led two local entrepreneurs to come up with their version of the bar and arcade trend, which they hope to open this spring.

Reclaim Arcade, as the new venture is called, is expected to open in their former CoWork Fredericksburg space in Gateway Village Shopping Center in Fredericksburg. Owners Tim Owens and Jim Groom have already bought, repaired—and in one case rebuilt—around 40 games from the ’70s, ’80s and ’90s such as Tron, Centipede and Donkey Kong. Patrons will be able to play them for a quarter, and use a card to buy craft beer, wine and cider from self-serve taps. There will also be a menu of ’80s-inspired fare.

“We don’t want to compete with Fun Land. They’re doing things with new arcade games,” said Owens. “This is a concept that’s more popular in larger cities where it’s classic arcade games married with beer and food, and I think we can bring our unique element to it in creating those kinds of spaces that transport people back in time. It could appeal to families in the same way that breweries appeal to families, because dad wants to have a beer and kids want to do something as well.”

He and Groom will offer a sneak preview of this blast from the past Jan. 25 at the 2020 Frosty Brew Thru beer festival at the Fredericksburg Fairgrounds. Fans following them on Reclaim’s Facebook page can post the games they’d most like to see at the event.

Marrying arcade games and a bar scene is nothing new. Atari founder Nolan Bushnell installed his first arcade cabinet, Computer Space, in a sports bar in 1971, and the company soon began using drinking establishments as testing grounds. Arcade chains such as Aladdin’s Castle, which had a location in what’s now Spotsylvania Towne Centre, sprang up, then slowly died out as home video game consoles became popular.

Technology had moved on, but some fans refused to follow. Among them is Paul Kermizian, who kicked off an arcade game revival when he and a group of friends opened Barcade in 2004 in Brooklyn. Their idea of serving American craft beers in a place where people could play vintage arcade games soon caught on, and Barcade eventually added the tagline “The Original Arcade Bar” in 2015 to distinguish itself from its followers.

Among them is Ground Kontrol, a video game/pinball arcade and bar that Owens and Groom visited while at a conference in Portland, Ore., in 2016. They thought the concept was “awesome,” but didn’t really consider coming up with one of their own until the space adjacent to their business in Gateway Village became available last year, Groom said from his home in Italy via a Telepresence Robot.

He said he was the first to float the idea, which Owens promptly shot down as being “ridiculous.” But, he added, they have a habit of eventually taking a “ridiculous” idea and making it a reality.

“The arcade realizes a vision that Tim and I both have, which is how do we take the space that we have, which is CoWork, and we were hoping it would be more dynamic, but it wasn’t that thrilling for us as creating an arcade bar,” Groom said. “While not a new concept, it’s a way to bring a whole bunch of arcade games and pinball and create a dynamic, vibrant space in Fredericksburg.”

The business partners closed CoWork Fredericksburg last month and hired Spaces Design Studio in Fredericksburg to redesign both their existing location and the empty storefront next door. People will enter through Reclaim Video, which displays their large collection of vintage VHS, Laserdisc and Betamax videos. Some were donated when they helped create the Console Living Room on the fourth floor of the University of Mary Washington’s Hurley Convergence Center. The exhibit featured technology and media from the mid-1980s set in a replica of a typical 1985 living room.

Owens, who’d been an instructional technology specialist in UMW’s Division of Teaching and Learning Technologies, and Groom, who’d been its executive director, put the Console Living Room furniture in storage when they left the university to found Reclaim Hosting, a web hosting company, and open Reclaim Video. Taking a cue from Alamo Drafthouse Cinema, a movie theater chain that offers free video rentals, they decided to keep Reclaim Video as the entrance to Reclaim Arcade. Patrons will be able to check in, show an ID and set up a tab for the arcade. They can also check out a video, and a VIP room decorated with the furnishings from the Console Living Room can be reserved if they want to watch movies there.

“One of the things for us that was fun was to build on top of our hosting company a sense of an aesthetic and notion of the long history of technology and the way it transforms not only the market but our personal lives and the way in which we relate to each other and that kind of sense of connection,” Groom said. “So the VHS store, at least for me from the ’80s, was a real point of contact when movies came into the living room and at the same time you had video games not only out in the stores, but you also had Atari 2600 and Nintendo NES and all these games coming into the living room and changing the way in which we related to this media.”

Reclaim Video will be in another room that’s already filling up with classic arcade games making various bleeps and bloops from an earlier era. Owens and Groom bought the first console, Centipede, on Craigslist. At the time, it was just going to be a fun element for CoWork Fredericksburg.

When the game’s firing button broke after six months, Owens opened up the cabinet and figured out how to fix it. The business partners decided to buy another game in 2018 and then 40 last year. They found some on Facebook Marketplace and others directly from the owners.

“There are several different Facebook groups where people post games and pinball machines,” Owens said recently. “I’ve gotten pretty regular at renting a U–Haul trailer. Just yesterday I drove up to Maryland and picked up two pinball machines and then picked up an X–Men game on my way back down. There’s actually a very large community of people still keeping and maintaining them.”

Still, the games—like their first Centipede console—eventually break or need a part. Owen said he’s had to learn how to make repairs.

“I remember the first time I opened up an arcade game I was like, I hope that never breaks and I shut it,” he said. “You can find reproduction parts and occasionally some new-old parts online. There are forums that can talk you through repairs. They’ll say, ‘Check the voltage. Do this thing.’ For half the repairs I do, there is a YouTube video. It’s a different world today with how much information is online.

He said one idea that he and Groom have is to shut the beer taps during the day, open the arcade to youngsters and offer a STEM class on how to repair the games.

“I realized that could be an avenue to get kids interested in that kind of trade work again,” Owen said. “People don’t think of electrical and plumbing work as that exciting. Everybody wants to be an astronaut or a scientist.”

Reclaim Hosting will also have its offices in the building, and its conference room will be available at night as a private break room or party area.

“Both of us were laughing at the idea [for Reclaim Arcade] at first, but now we’re all in,” Groom said. “What was an idea and a joke in September soon became a reality in November, and we hope to have it done by May.”