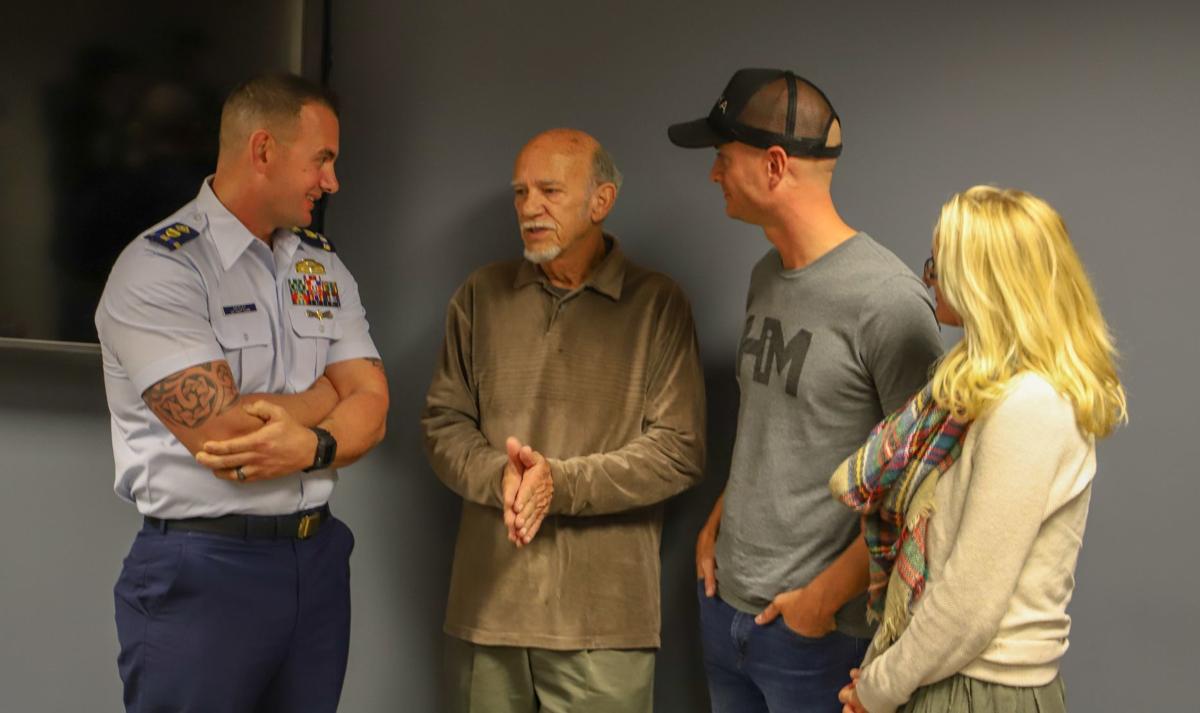 Jim Kendrick (second from left) thanks Chuck Shipley and David Doucet and his wife, Heather, for their assistance during his medical emergency.

Shipley, Kendrick and the Doucets are pictured with Stafford Fire and Rescue personnel who responded to help Kendrick during his medical emergency.

Jim Kendrick (second from left) thanks Chuck Shipley and David Doucet and his wife, Heather, for their assistance during his medical emergency.

Shipley, Kendrick and the Doucets are pictured with Stafford Fire and Rescue personnel who responded to help Kendrick during his medical emergency.

When Jim Kendrick left his Hartwood home on Sept. 10, he did not know that he was about to become part of an elite group of people—the less than 8 percent of people annually who survive in experiencing cardiac arrest outside a hospital. Unexpectedly, Kendrick’s heart stopped beating as he was driving south on Interstate 95. Three bystanders stopped, freed him from his car, started performing CPR and called 911. Kendrick survived and was reunited recently with the men who helped save his life.

“I am proud to be a part of community where when someone is in need, people don’t think of themselves and they just act,” said Stafford Fire and Rescue Chief Joseph Cardello. “Often, our providers don’t see good outcomes. It’s good for them to see him [Kendrick] in person.”

Indeed, there were smiles all the way around at the informal gathering at the Ford T. Humphrey Public Safety Building. Jim Kendrick joined U.S Navy Lt. David Doucet, U.S. Coast Guard Chief Warrant Officer 3 Chuck Shipley, as well as the many Stafford Fire and Rescue emergency personnel who responded to the call that day.

“Thank you for staying up on all the emergency medical skills. Super job! Your training has all paid off,” said Jim Kendrick. “I don’t know how to express my thanks. It’s an honor to be here.”

Kendrick changed his route that day, taking I–95 to run an errand instead of taking a back road to his mother’s house. That change may have helped save his life. When his car started weaving and eventually bumped up against a Jersey wall and stopped, Lt. Doucet and his wife, Heather, were returning from an appointment in Washington, D.C., on their way home to Virginia Beach when they spotted him and immediately pulled over to help.

Lt. Doucet keeps a special tool in his car to break windows in the event of an emergency. Chief Warrant Officer Shipley of Hartwood saw what was happening and stopped to help, along with an unidentified bystander. Both military men have been trained in emergency aid. They started cardiopulmonary resuscitation and called 911. Thanks to their training, the men continued CPR, recognizing that gasping by Kendrick was not real breathing and that CPR was still needed.

That was a crucial decision. According to the American Heart Association, brain death starts to occur four to six minutes after someone experiences cardiac arrest if no CPR and defibrillation occurs during that time. CPR helps maintain vital blood flow to the heart and brain and increases the amount of time that an electric shock from a defibrillator—like the ones that are in every ambulance and most public buildings—can be effective. CPR can buy extra time for a victim, like Mr. Kendrick, if started immediately. The statistics are sobering.

“There were hundreds of people who passed by that day, but these bystanders stopped. Those minutes counted and made all the difference,” said Fire and Rescue Lt. Brian Thompson.

What can you do to be prepared? Everyone should learn CPR. The American Heart Association recommends being trained and retrained on a regular basis. Studies show that the memory of CPR skills and knowledge tends to deteriorate as early as three months after training, even for highly skilled professionals. The American Heart Association provides training, as well as local organization Gwyneth’s Gift.

Download Stafford’s PulsePoint app from the iTunes Store. PulsePoint is a free application geared toward citizens trained in CPR to download to smartphones so they can be notified immediately if someone nearby goes into sudden cardiac arrest. As well as alerting users to those in cardiac arrest, the app also pinpoints the closest location of public automated external defibrillators.

Plans call for recognizing the Fire and Rescue personnel, bystanders and Kendrick at a future Board of Supervisors meeting.