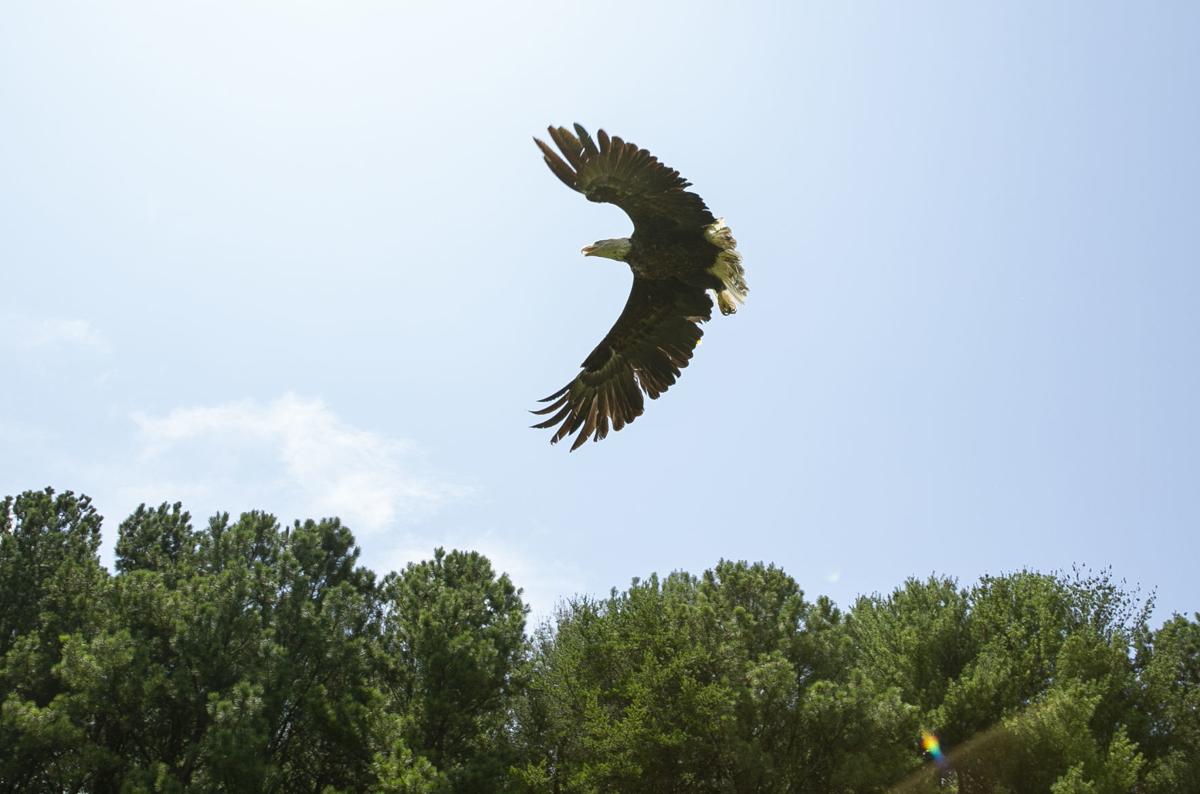 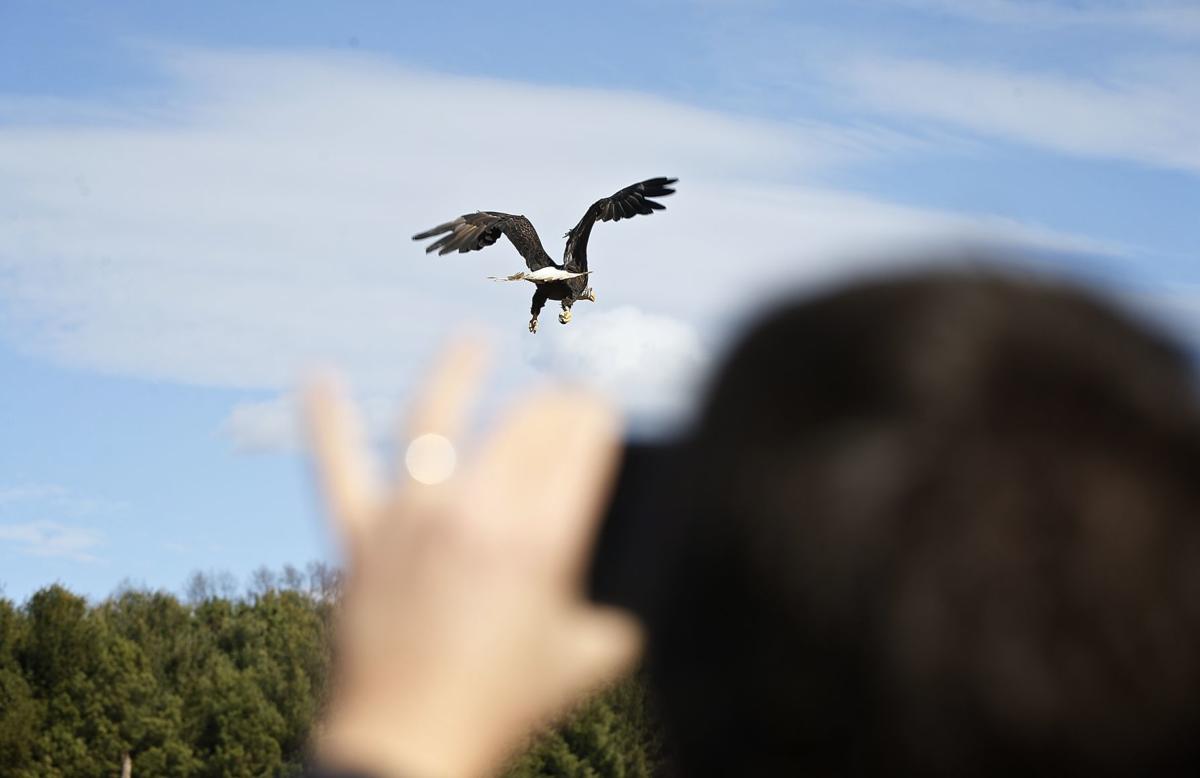 An adult female bald eagle is released at Alder Flats in Caledon State Park in 2017. 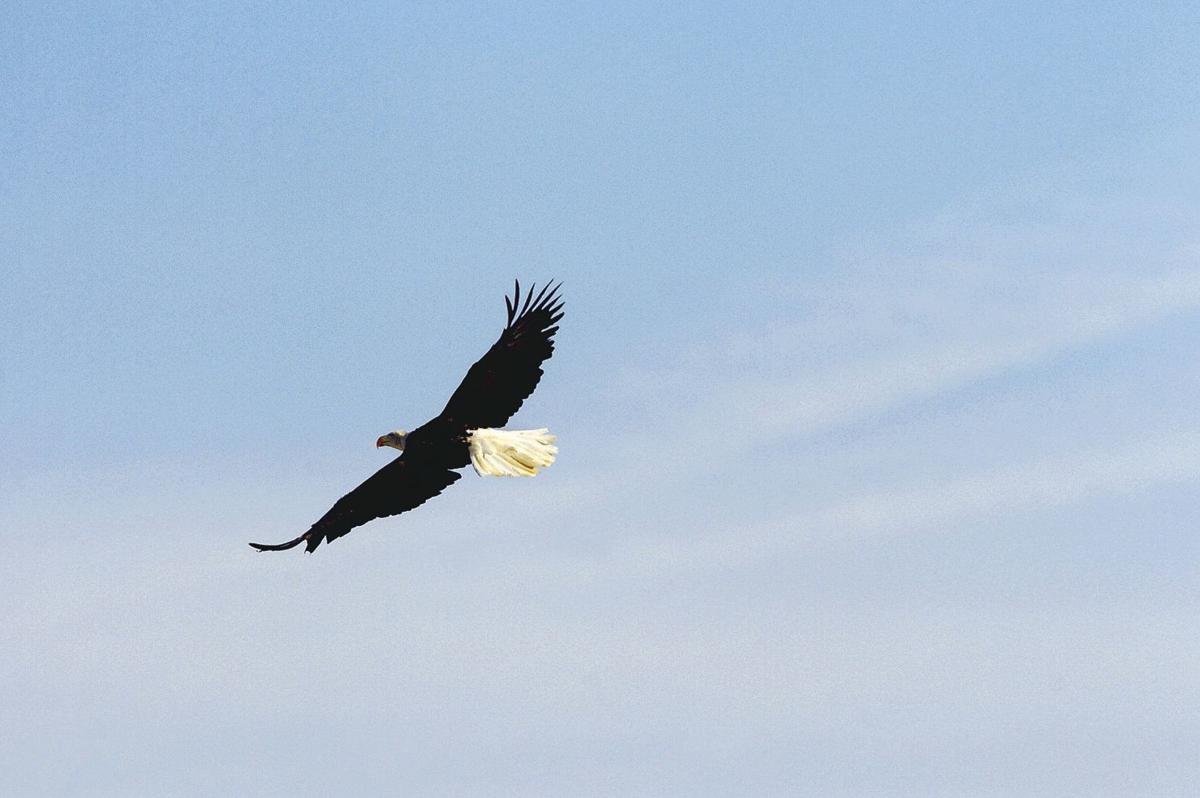 A 28 year-old female eagle was released at Caledon Natural Area in King George. 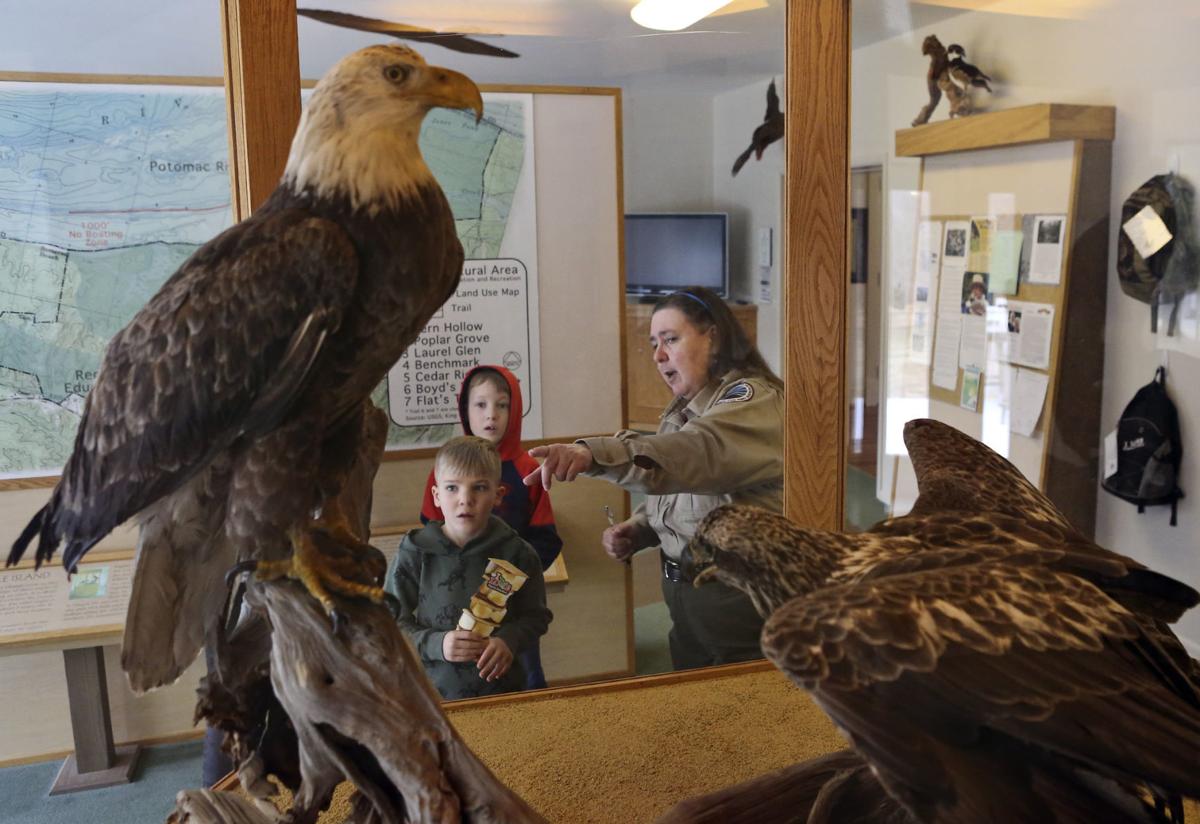 Ranger Lou Foster describes eagles’ lifestyles to young visitors at Caledon State Park, which features an exhibit on the birds. 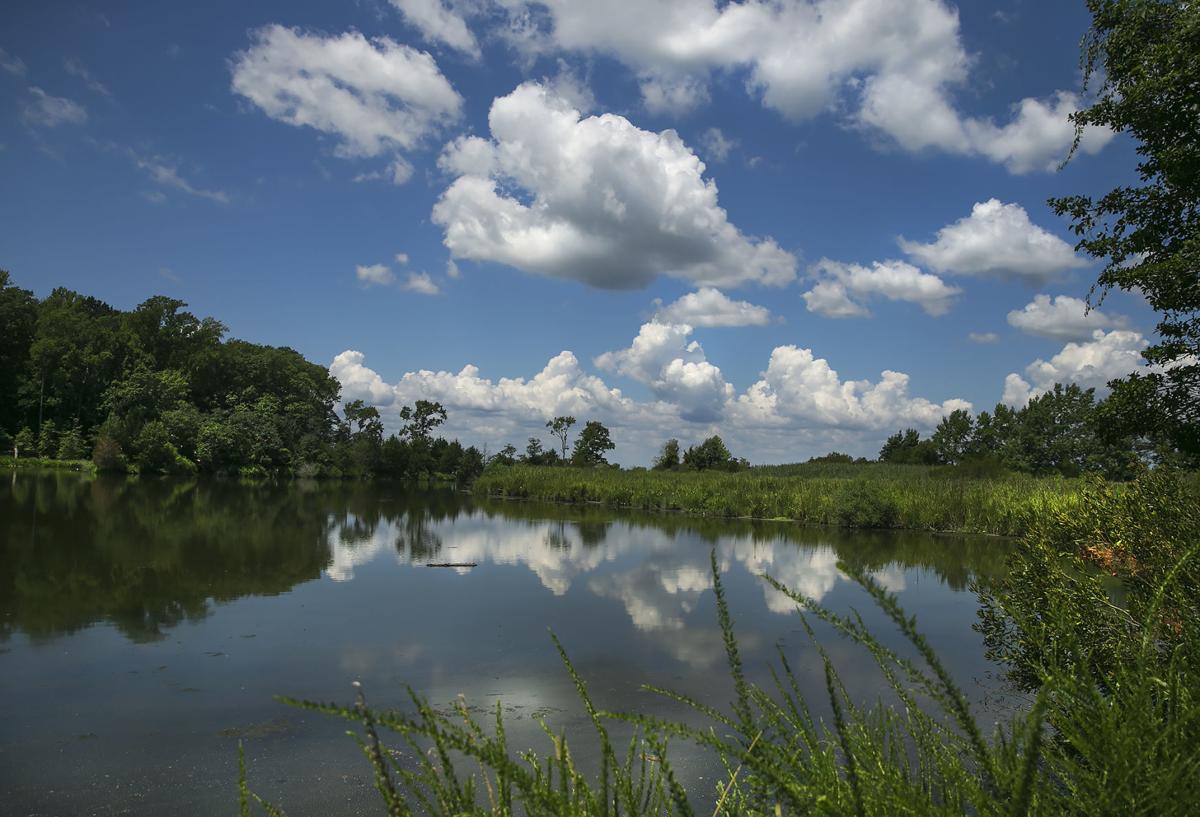 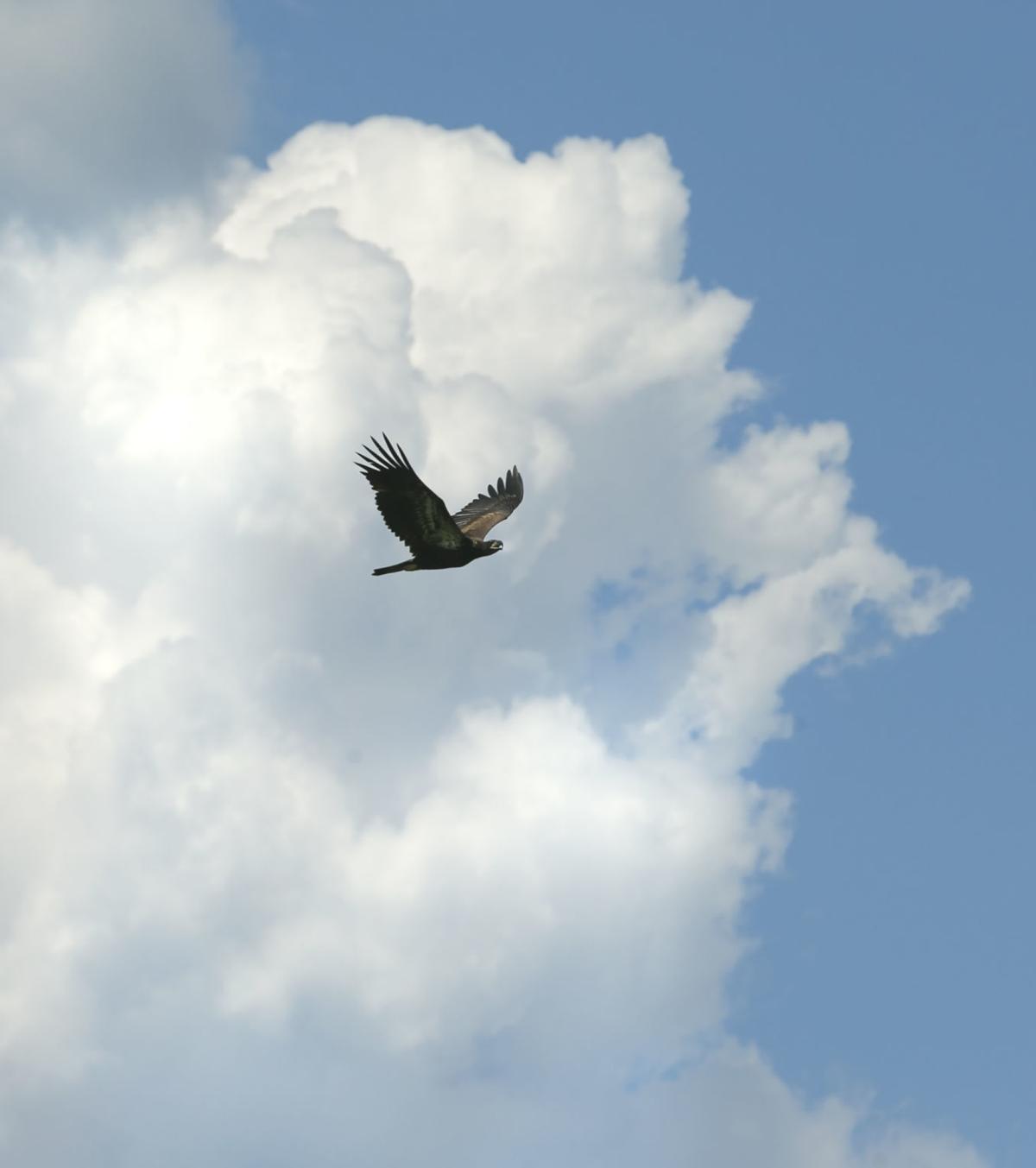 A young bald eagle flies above the banks of the Potomac River at Caledon State Park—a place to flock to if you’re hoping to catch sight of the majestic birds.

An adult female bald eagle is released at Alder Flats in Caledon State Park in 2017.

A 28 year-old female eagle was released at Caledon Natural Area in King George.

Ranger Lou Foster describes eagles’ lifestyles to young visitors at Caledon State Park, which features an exhibit on the birds.

A young bald eagle flies above the banks of the Potomac River at Caledon State Park—a place to flock to if you’re hoping to catch sight of the majestic birds.

Aside from wildlife biologists and those who count the bald eagle population in the state, Nina Cox has probably seen more of the majestic birds than most.

That’s because since 1990, she’s been the manager at Caledon in King George County.

The 2,587-acre tract along the Potomac River was initially operated by Virginia State Parks as a natural area. During that time, it imposed restrictions on visitors designed to protect the summering eagle population during and after years when they were a federally protected species.

Caledon became a full state park in 2012. And while some of the restrictions on what visitors can do there have been relaxed because the eagle population has rebounded, visitors are still not allowed to drive in the eagle nesting areas along the river. No park buildings are located there and programs with excessive noise are directed elsewhere.

Cox noted that while Caledon is no longer the spot with the highest number of summering eagles in Virginia—one recent survey gives that distinction to a spot on the James River—it’s still a place where visitors stand a very good chance of seeing eagles.

Especially if they pick certain spots and times.

“The best time to see them is early in the morning,” said Cox, noting that though eagle counts are no longer done along the river, the highest number reached when they were recorded was 60 in one day.

“The park is open from 8 a.m. to sunset, and one way many people get to see eagles is a program where visitors can kayak on the river in the mornings,” she said. “Our evening kayaking programs are popular, as well, and there’s always a chance to see eagles then, too.”

Cox said Caledon staffers “see the most eagles from mid-June through July and August, the hotter months of the year,” a rise in the population that coincides with the time when fish are spawning along the riverbanks where the water is relatively shallow.

Tall perches in the pines and other stately trees along the river let the eagles peer down to find their next meal in the waters below.

“The young ones fledge by July and then hang around for summer months, learning to hunt and fish, before leaving,” she added.

Cox noted that while eagles are thick through King George County in the summer, there aren’t that many places where folks can get to a publicly owned shoreline to see eagles that purposely put nests near the water-filled feeding grounds.

She said Wilmont Landing on the Rappahannock River, a canoe- and kayak-launch area at 18049 Wilmont Road in King George operated by the Virginia Division of Game and Inland Fisheries, “is another spot where the public can see eagles” and other majestic birds such as osprey and herons.

And while the chance to see eagles is one thing that brings visitors to Caledon, Cox said there’s plenty of other wildlife in the park.

“There’s a master naturalist doing a project now identifying the diversity of wildlife in the park as a project,” said Cox. “Trail cams put up for that have recently captured photos of a bobcat and a mink. Visitors here will also at different times see muskrat, beaver, deer and groundhogs.”

Not to mention the woodpeckers, owls, redwing blackbirds and the herons, the latter with an important rookery along the water.

To learn more about Caledon and programs that will get you out to see eagles and all sorts of wildlife, go online to dcr.virginia.gov/state-parks/Caledon.