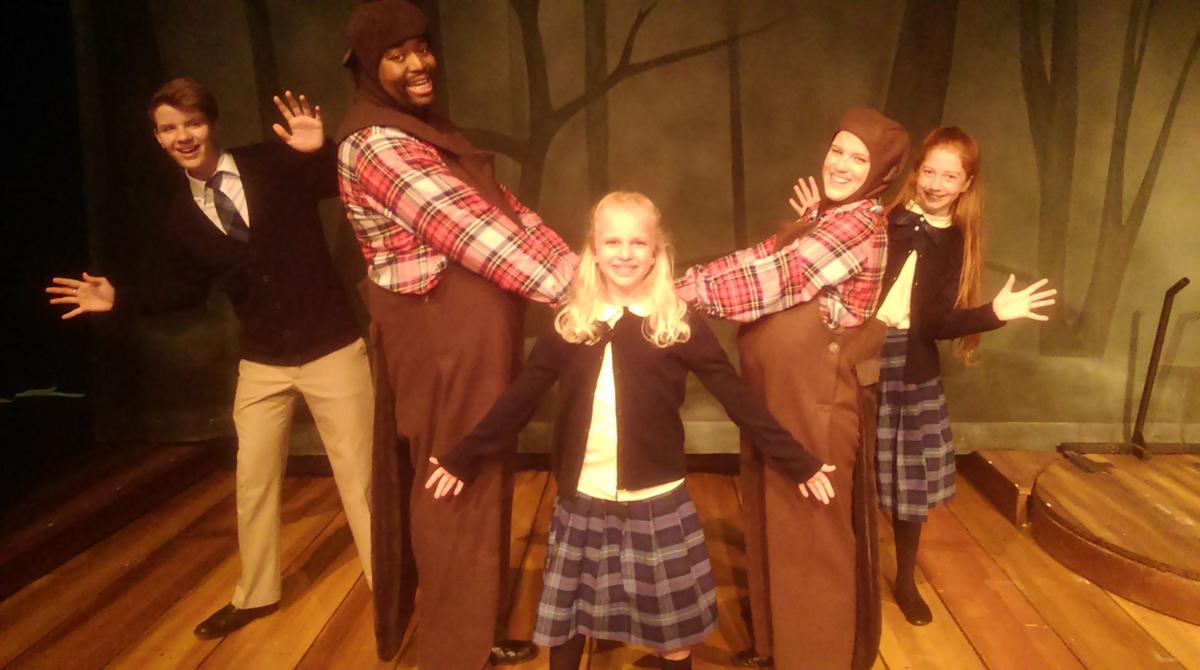 The Pevensie children enjoy the fun hospitality of the Beavers in ‘Narnia’ at Riverside. 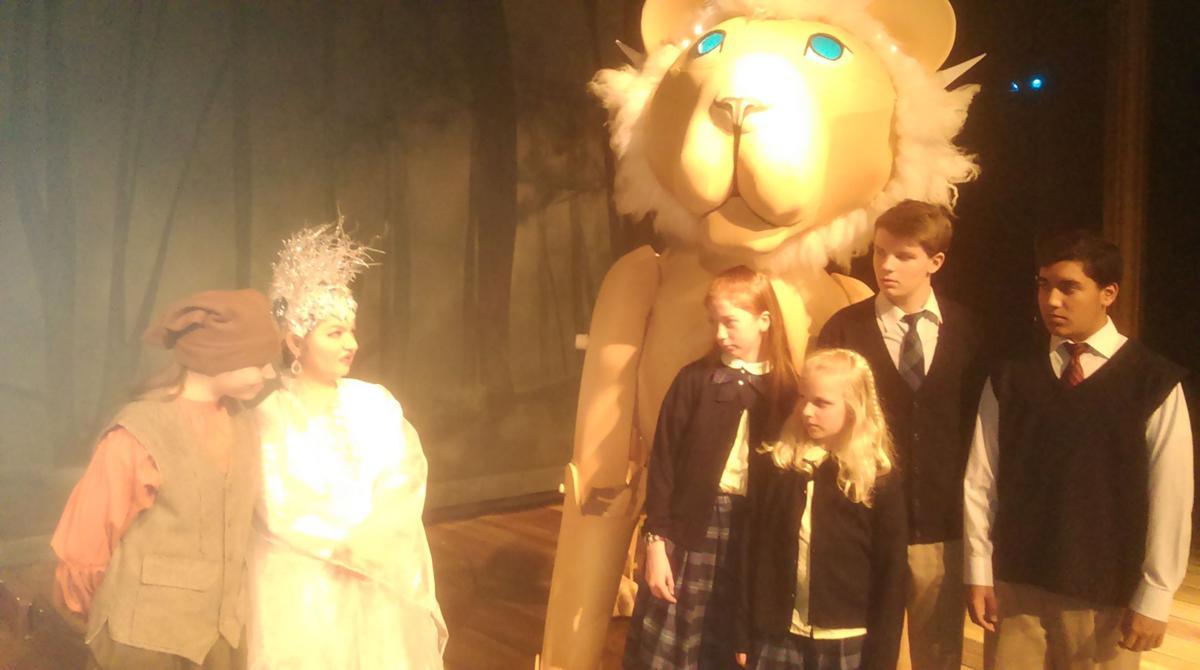 the White Witch and Aslan 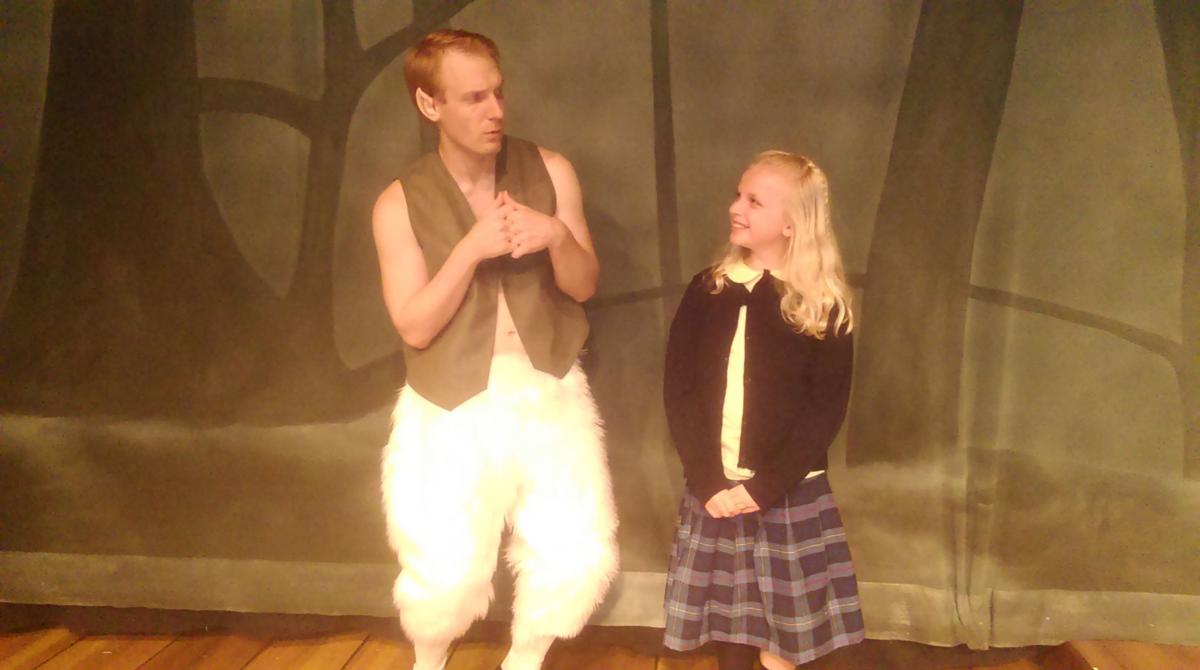 Lucy (Samantha Low) finds a fast friend in Tumnus the faun (Colby LeRoy) when she discovers the magical world.

The Pevensie children enjoy the fun hospitality of the Beavers in ‘Narnia’ at Riverside.

the White Witch and Aslan

Lucy (Samantha Low) finds a fast friend in Tumnus the faun (Colby LeRoy) when she discovers the magical world.

The current feature of Riverside Children’s Theater, “Narnia,” brings to life C.S. Lewis’ saga of “The Lion, the Witch and the Wardrobe” by a cast with such talent and earnest investment that they would bring joy to the author’s heart.

The story has enthralled generations of children since its publication more than 65 years ago and has been translated into 47 languages. A classic tale of loyalty, sacrifice and justice, its message relates to the experience of children today.

“Young audiences quickly become engaged in the story because it touches on some very real questions that they have to deal with. What do you do when someone betrays your trust? How do you forgive someone who has done something really bad? Those are all things that we all need to learn,” said Steve Thompson, who is directing the show with his wife, Mary, who is also the musical director.

As the story begins, the Pevensie children—Peter, Edmund, Susan and Lucy—live in England during the throes of WWII and are taken from the city to a countryside home for protection from air-raid bombings. While exploring the home of the professor and his housekeeper, they enter a magical wardrobe which serves as their threshold to their adventures in the fantastic but fearsome land of Narnia.

“Children of war often don’t know what to expect. In this story the siblings are thrown from a World War into the middle of this other war and they have to find their own way,” said Thompson. “They stumble through various events in a strange realm but they learn that with the proper attitude and perseverance they can achieve what they need to.”

Lucy (Samantha Low) is the youngest of the children and the first to enter Narnia, and her excited report initially elicits teasing gibes from her siblings. But the seed is planted for a greater divide as the younger of the two brothers, Edmund (Joshua Arroyo), follows Lucy’s journey. He succumbs to the temptations and enticements of the darker side of the kingdom, which has been held by the White Witch/ (Susan Rearik) in a state of continual winter in the absence of its rightful king, Aslan. Edmond’s alliance with the witch jeopardizes both his siblings and inhabitants of Narnia, such as Tumnus the faun (Colby LeRoy) who could not bring himself to trick Lucy with a ploy of the witch.

Then, for the first time in more than 100 years there are stirrings of spring—a sign that Aslan has returned to the land. Edmund’s siblings seek him out and Aslan’s entrance on the stage is truly an awe-inspiring moment. Crafted by local artist Kylie Clark, the lion/king stands 7 feet tall and his countenance and movement—though simple—manifest a spectrum of regal qualities: serenity, wisdom, forbearance and bravery.

This children’s story deals with some weighty subjects: the existence of evil, the consequences of wrong action, and the possibility of redemption and forgiveness. However, both the script and the Thompsons’ direction incorporate elements of humor that provide comic relief, such as the episodes with Mr. and Mrs. Beaver (Jayson Daniels Jr. and Sydney Davis) with their lighthearted banter and vaudeville-esque dance in “What a Bit o’ Spring Can Do!”

When the witch is dissatisfied with the results Edmund brings, she demands that his life be taken. In spite of Aslan’s majesty and power, there is nothing he can do to intervene because the witch’s claim is justified by the kingdom’s principles of “Deep Magic” which dictate that traitors are the rightful claim of the evil dynasty. But Aslan barters with the witch and offers his own life in Edmund’s stead—a bargain which she eagerly seizes. Though resigned to his fate, Aslan is confident in yet a higher law of Deep Magic that determines the destiny of one who innocently sacrifices himself for the sake of another.

When young Peter (Zechariah Beale) rises to the occasion to lead his siblings and the creatures of Narnia against the witch’s forces led by her henchman-wolf Ryweth (Samuel Cook), Susan (Katerie Davis) sends out a call for help and Aslan reappears—more powerful than ever and indomitable.

“The music in this production is difficult and we are fortunate to have such accomplished voices for the characters of the witch-queen (Rearick) and Aslan (John Flemming). Aslan’s songs are so beautiful and touching, they have brought many in the audience to tears,” said Thompson.

Viewers young and old can relate to and engage in this show.

“The message is that, for any world you want to live in, you have to contribute to it. If you just stand idly by, you will be a victim,” said Thompson. “It’s a great story that should stimulate some meaningful conversations between parents and children about what is important in their life and what is worth fighting for.”