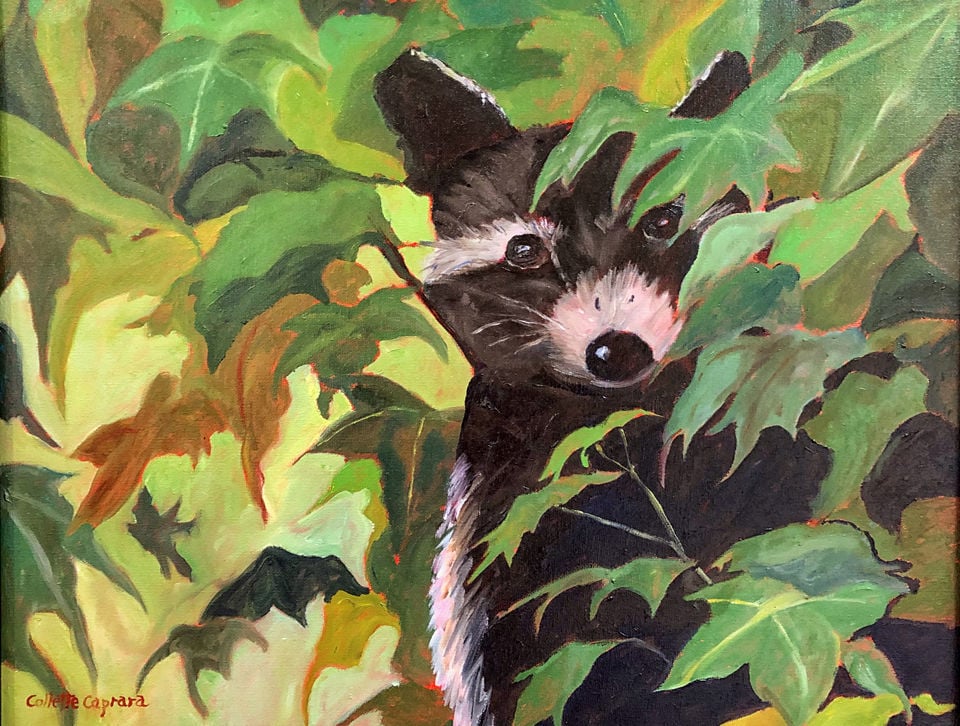 The exhibit of 20 works includes this painting of an adorable raccoon. 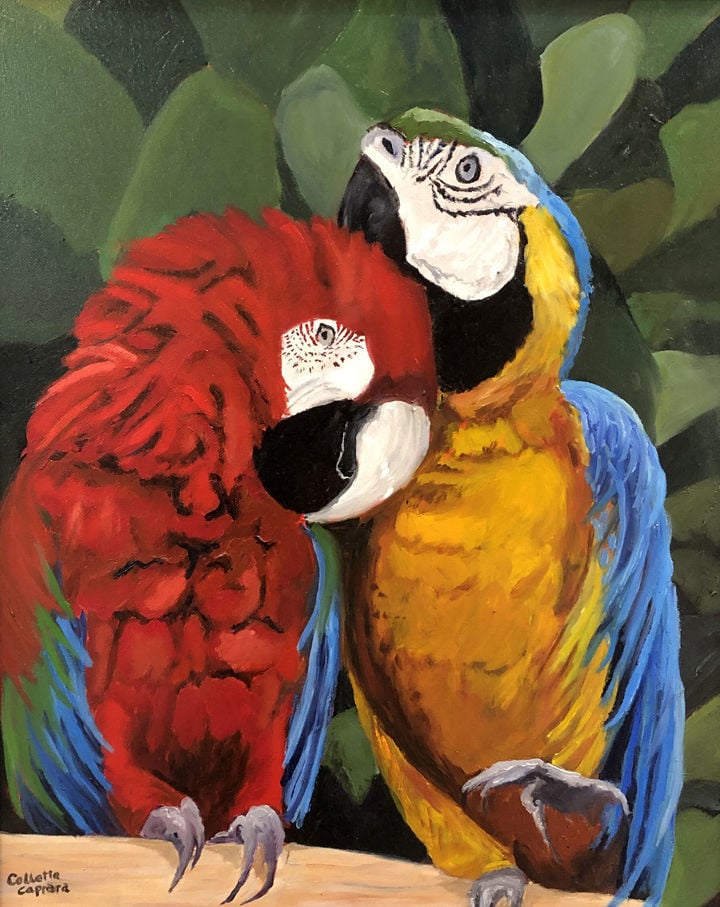 Local artist and writer Collette Caprara is this month’s featured artist at Brush Strokes Gallery. Her exhibit ‘What a Wonderful World!’ is inspired by her extensive travels. 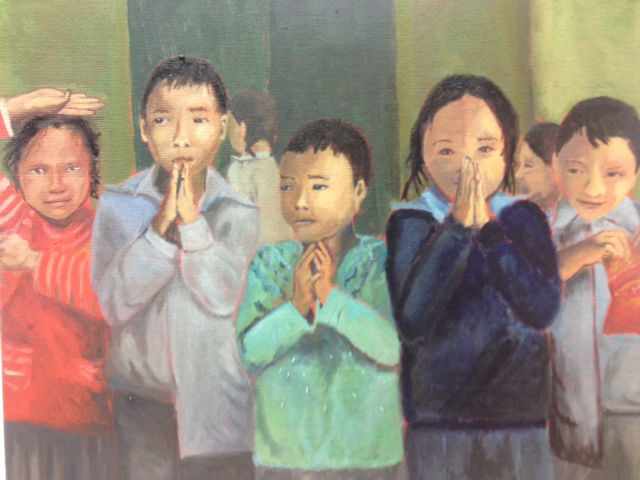 ‘Namaste’ shows a group of children she encountered during a visit to Nepal. 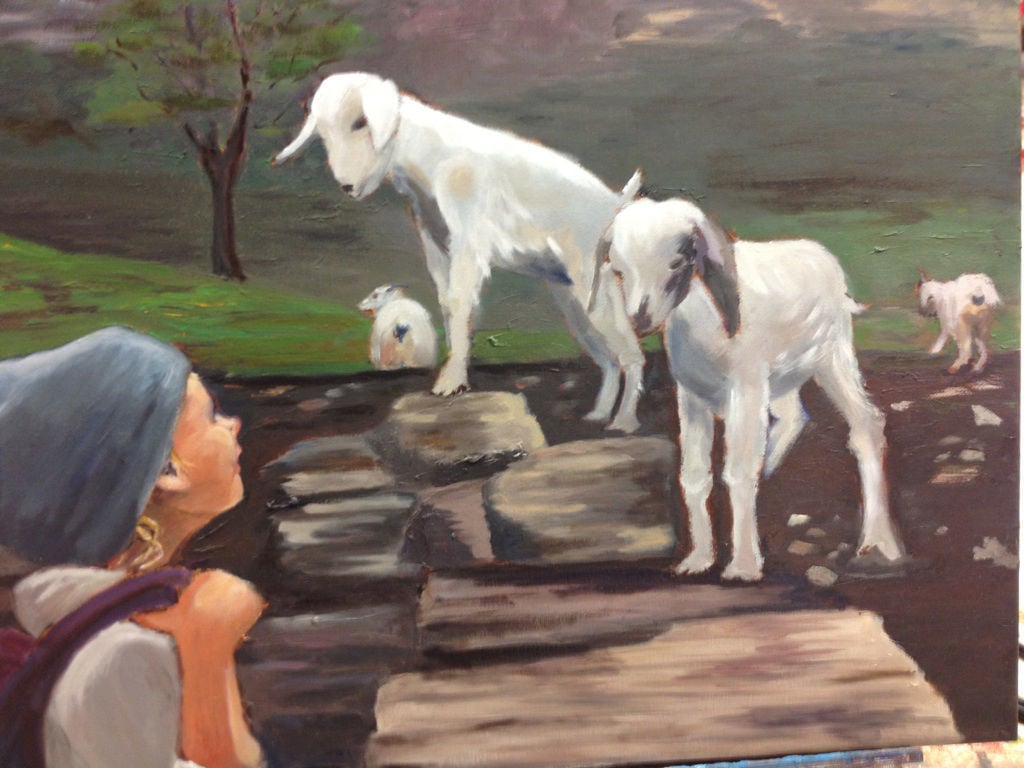 The exhibit of 20 works includes this painting of an adorable raccoon.

Local artist and writer Collette Caprara is this month’s featured artist at Brush Strokes Gallery. Her exhibit ‘What a Wonderful World!’ is inspired by her extensive travels.

‘Namaste’ shows a group of children she encountered during a visit to Nepal.

Collette Caprara is continually inspired by the world around her. In Fredericksburg, it’s easy to be stirred by the steeples, bridges, the river and colorful locals. But having traveled extensively, Caprara is touched by the enduring beauty of nature and the common humanity she sees in communities around the globe—Kenya, South Africa, Uganda, Mongolia, India and Nepal.

Her celebration of people and nature is at the forefront of her new show “What a Wonderful World!” at Brush Strokes Gallery, which runs through September.

“In my ‘Wonderful World’ exhibit, I strove to capture the unique personality of a spectrum of animals,” she said.

The exhibit is as playful as it is humbling, and as colorful as it is realistic. The subjects in her new paintings include “regal lion[s], sleek cheetahs and lumbering elephants to tiny insects that often escape our attention.”

One such insect she depicts is a honeybee that’s engulfed by the sunflower it has landed on. Her light touch to the subjects in her paintings brings emotion, and sometimes even humor to the canvas. That element of humor is especially present in her paintings of a parrot grooming his friend and of a raccoon peering through a tree. These emotions carry over to her human subjects, as well.

“In my encounters with adults and children throughout the world, I have continually been impressed with how, across all differences in cultures and lifestyles, human nature is consistent and bonds us all together, and I strive to convey that in my paintings,” she said.

Another painting, in the show of about 20, depicts a group of children in Nepal, who formally greeted her camera with a traditional “namaste” salutation. But one young boy lowered his hands to a snack, which she captured as universally precocious.

She also depicts a young Russian girl hiking with her mother in the Himalayas who is fascinated by a group of young mountain goats. The goats echo her curiosity.

This collection of paintings inspired by her many travels have been years in the progress. When it was Caprara’s time to exhibit at Brush Strokes, an artist cooperative that rotates member spotlights, she wanted to show a sense of universal wonder. She was additionally inspired by the song “What a Wonderful World,” from which the exhibit gets its name. She said it’s a favorite song of hers and perfectly fits the feeling she wants to convey.

Caprara, who is a writer for the Free Lance-Star’s Weekender section, is active in Fredericksburg’s Sister City relationship with Kathmandu, Nepal, and is traveling there again this month. She said she continues to be inspired by the people and the nature there, by universal glances and sudden scenes.

“A smile is a smile across all cultures,” she said.

“What a Wonderful World! Celebrating Creation and the People of Our Precious Planet,” Brush Strokes Gallery, 824 Caroline St. Through Sept. 29. 540/368-0560; brushstrokesfredericksburg.com.