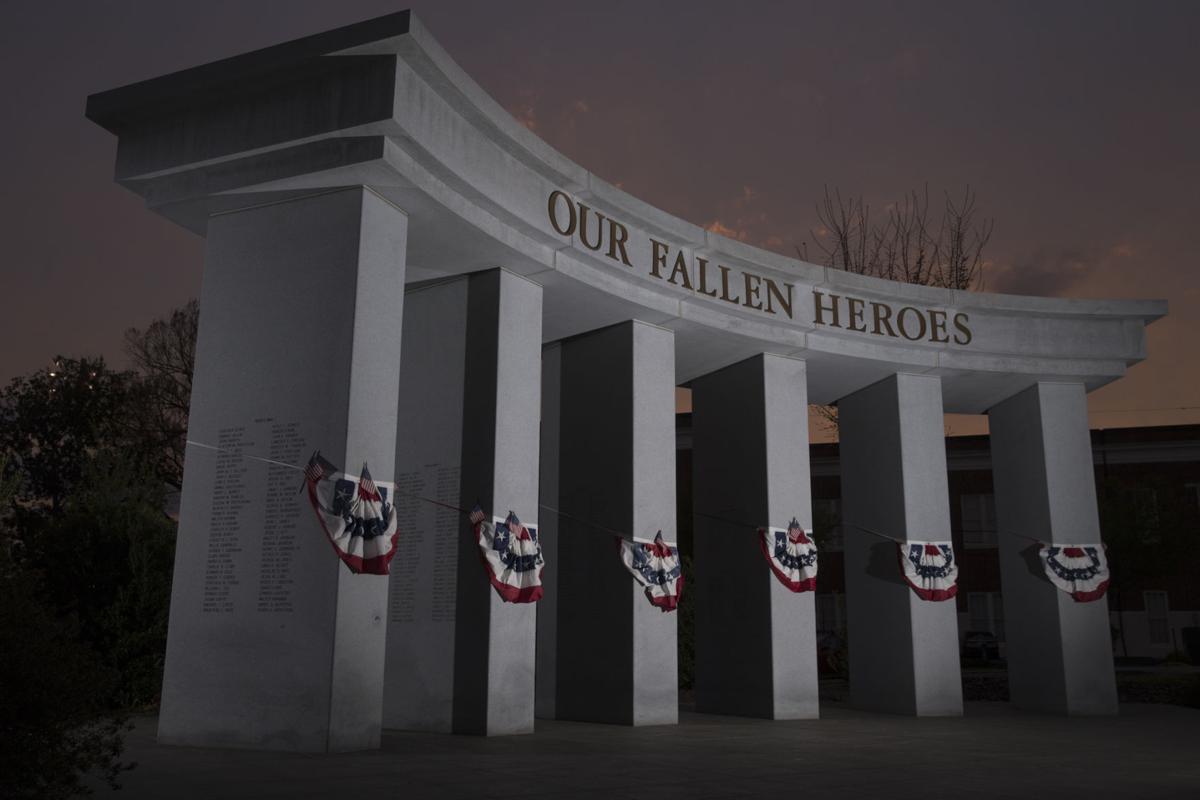 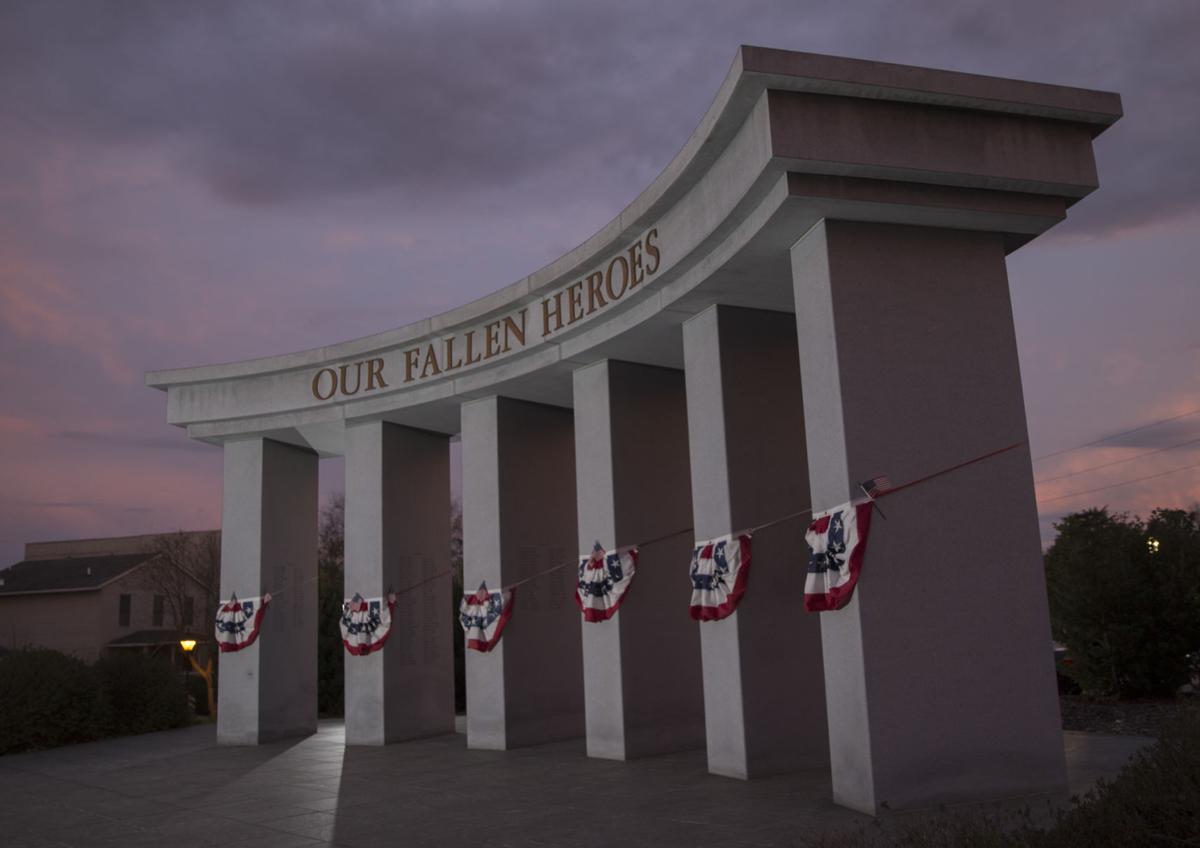 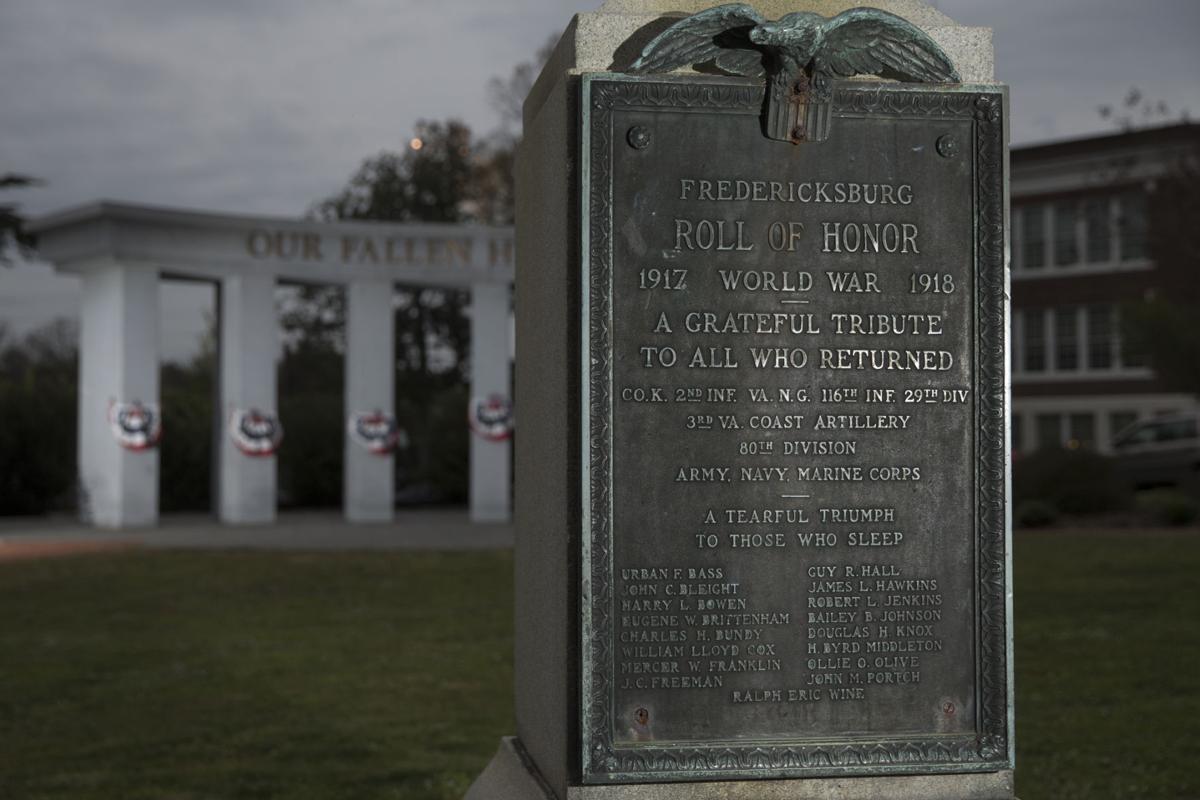 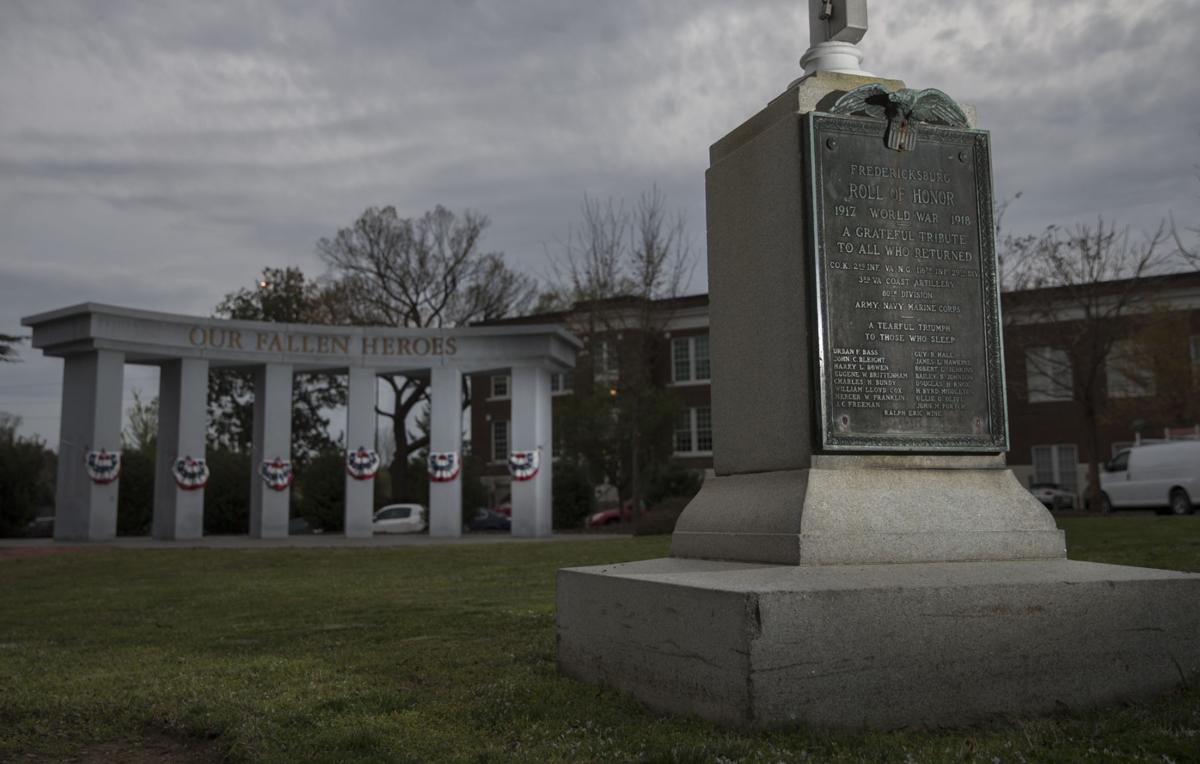 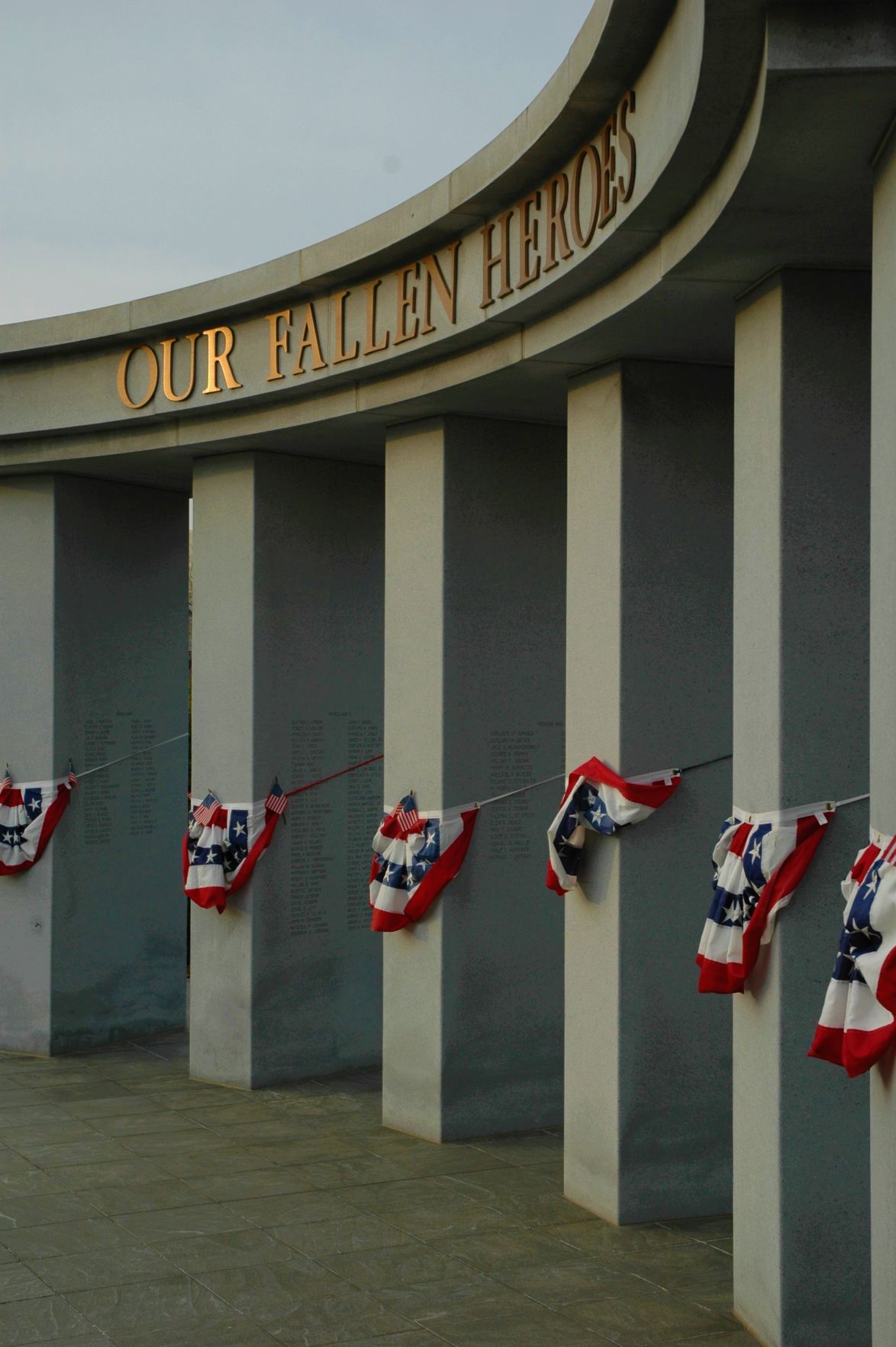 Six heavy granite columns inscribed with names and topped with massive capstones memoralizes the hundreds of area soldiers who died in service to their country since World War I in Fredericksburg. 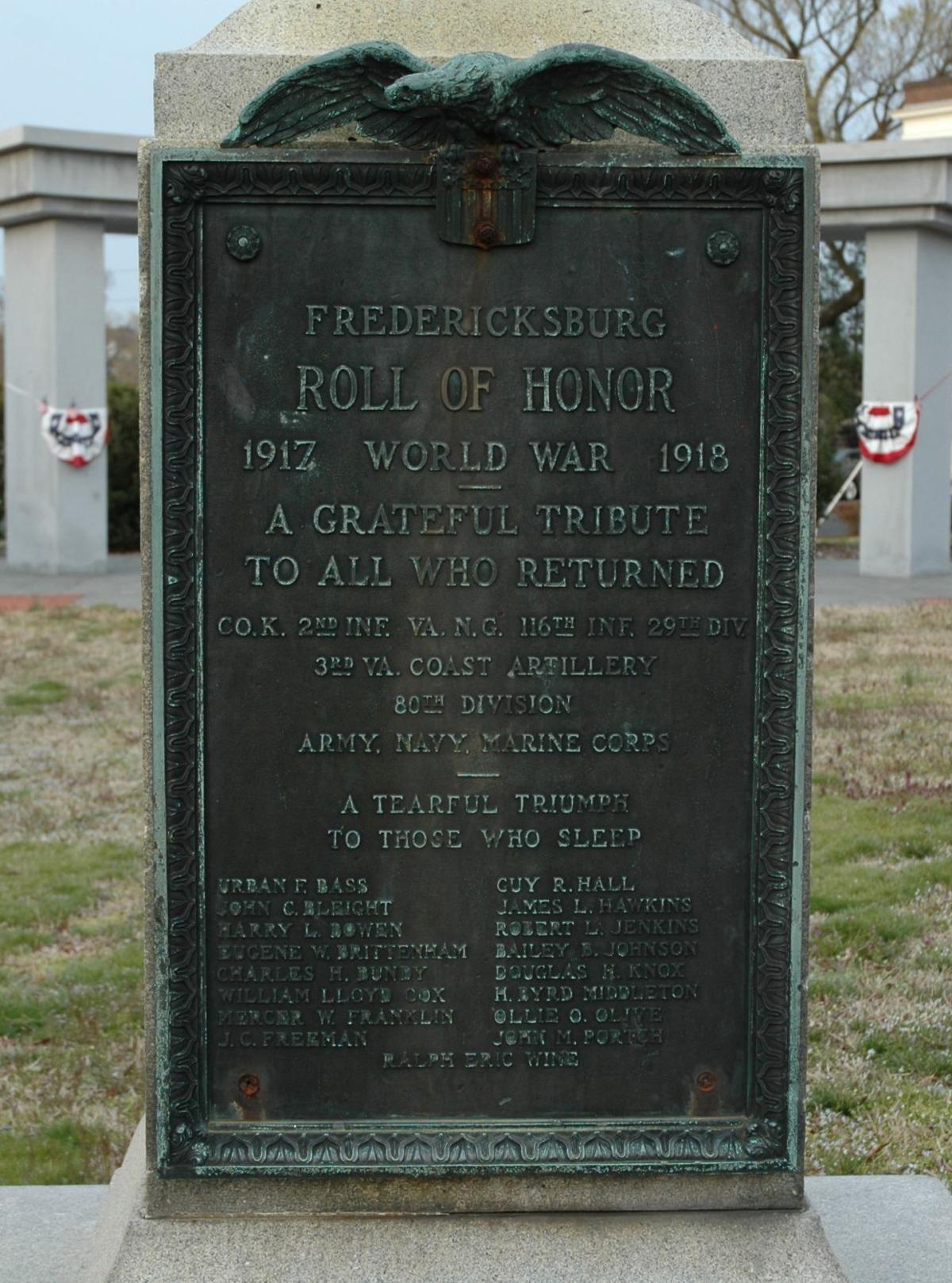 A Roll of Honor plaque at the Fredericksburg Area War Memorial honors World War I veterans. 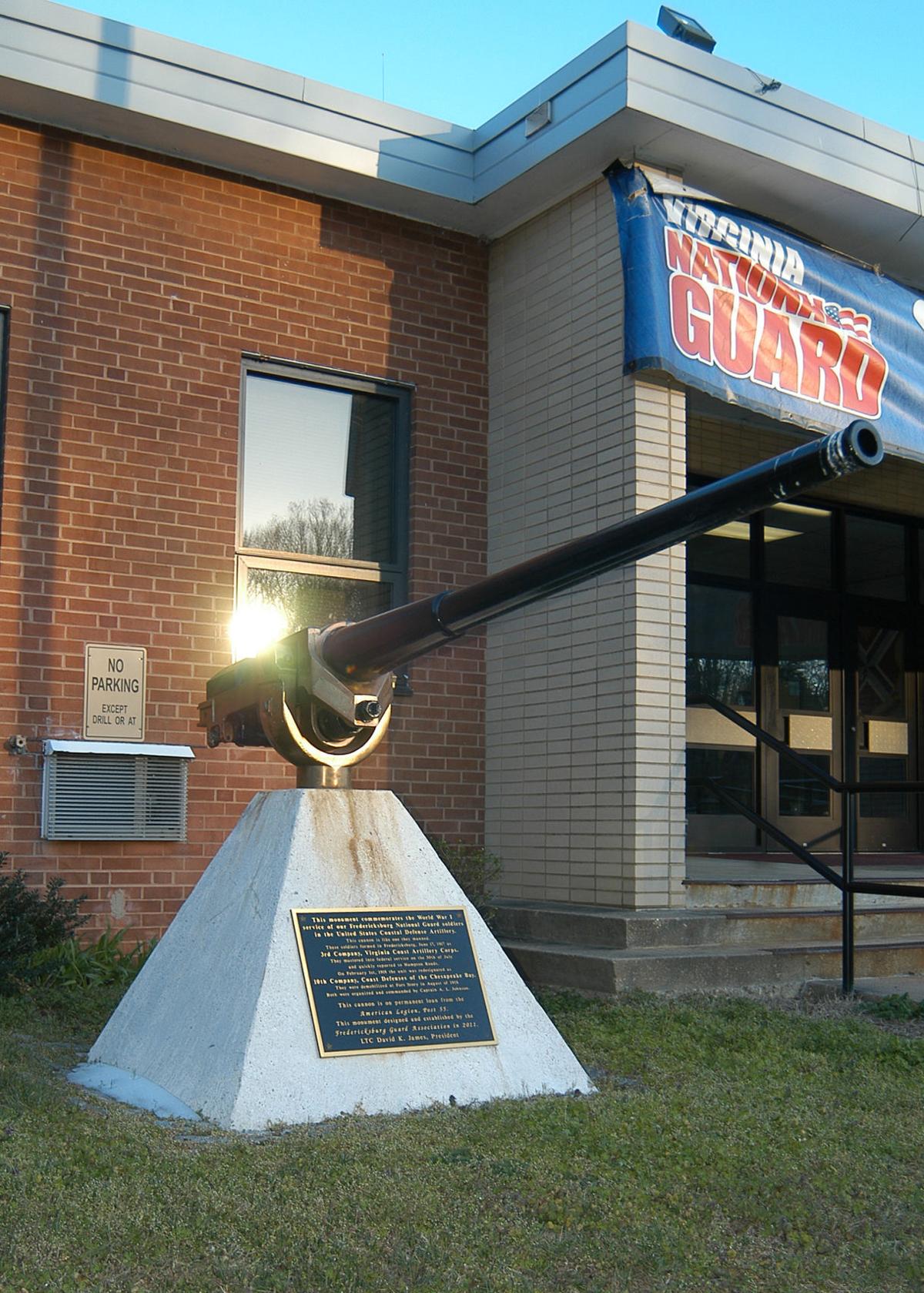 A monument commemorates the service of Fredericksburg area guardsmen during WWI at the Mason–Ruhren Readiness Center in Fredericksburg. 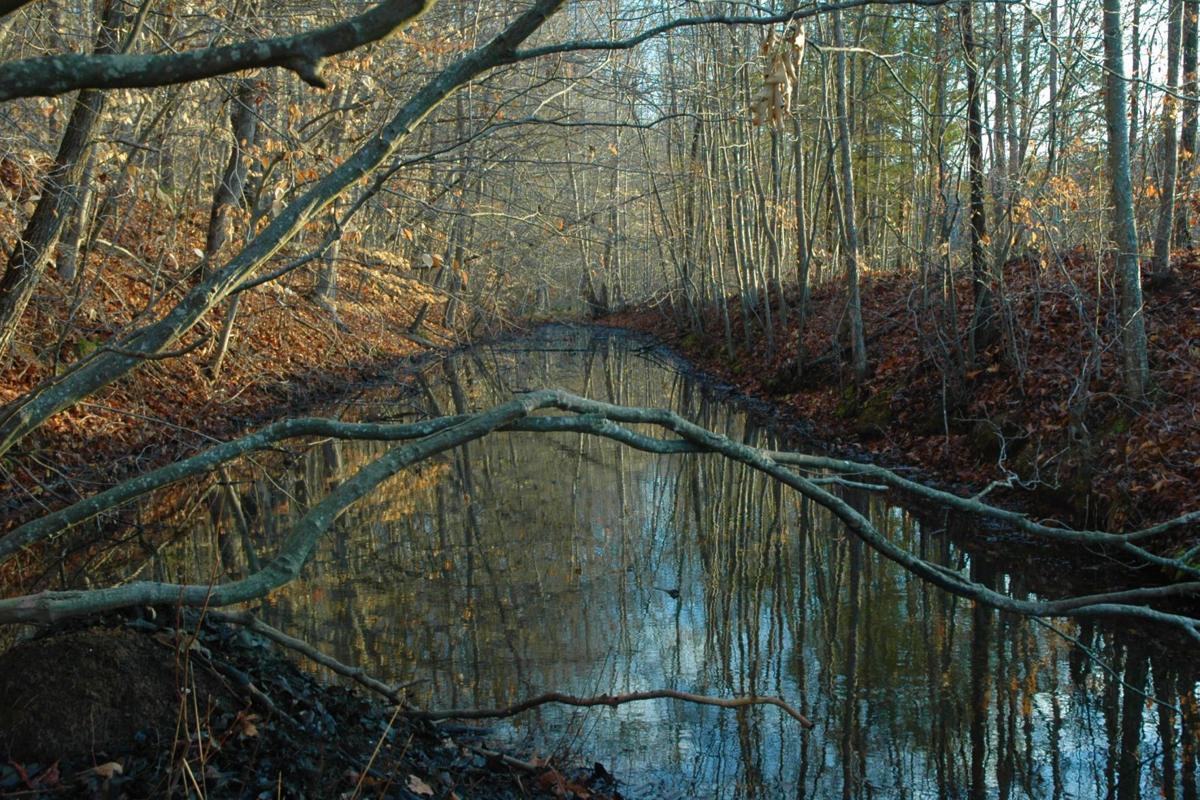 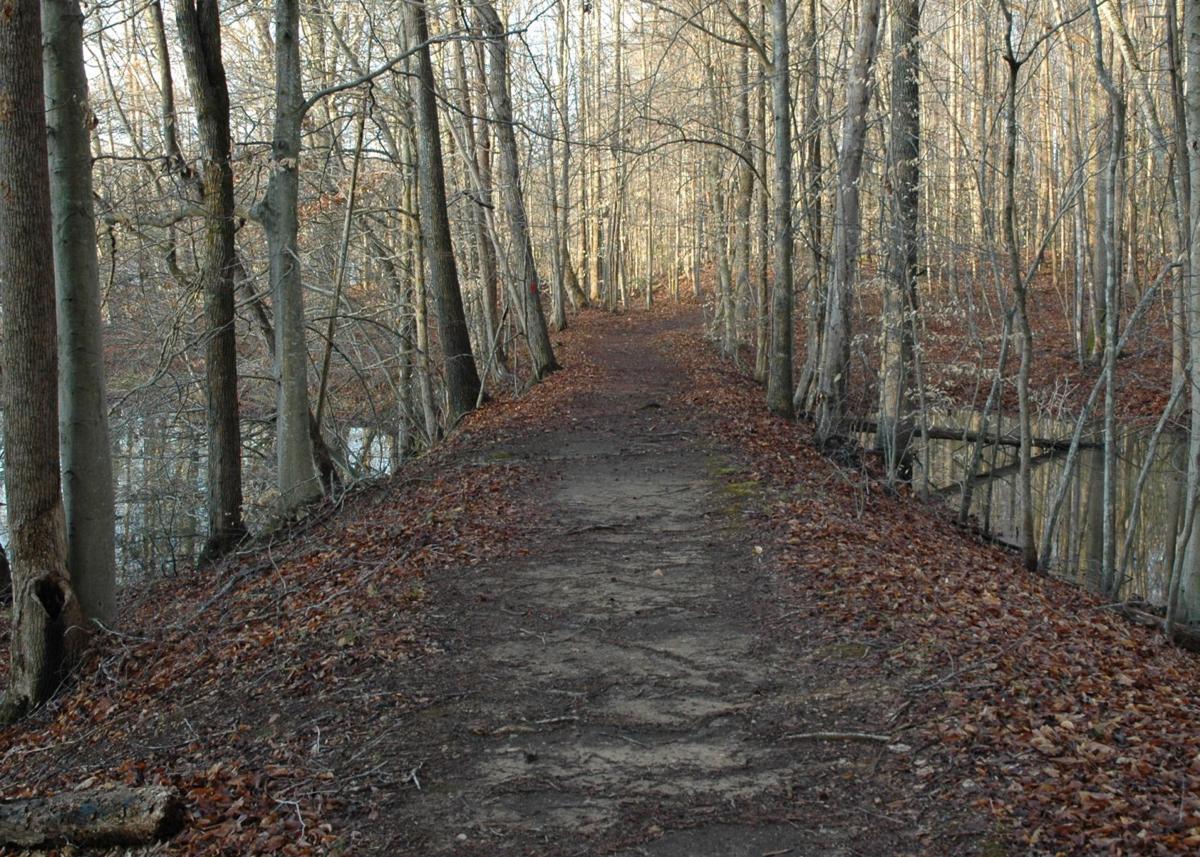 A railroad trace in Lake Anna State Park dates to World War I. 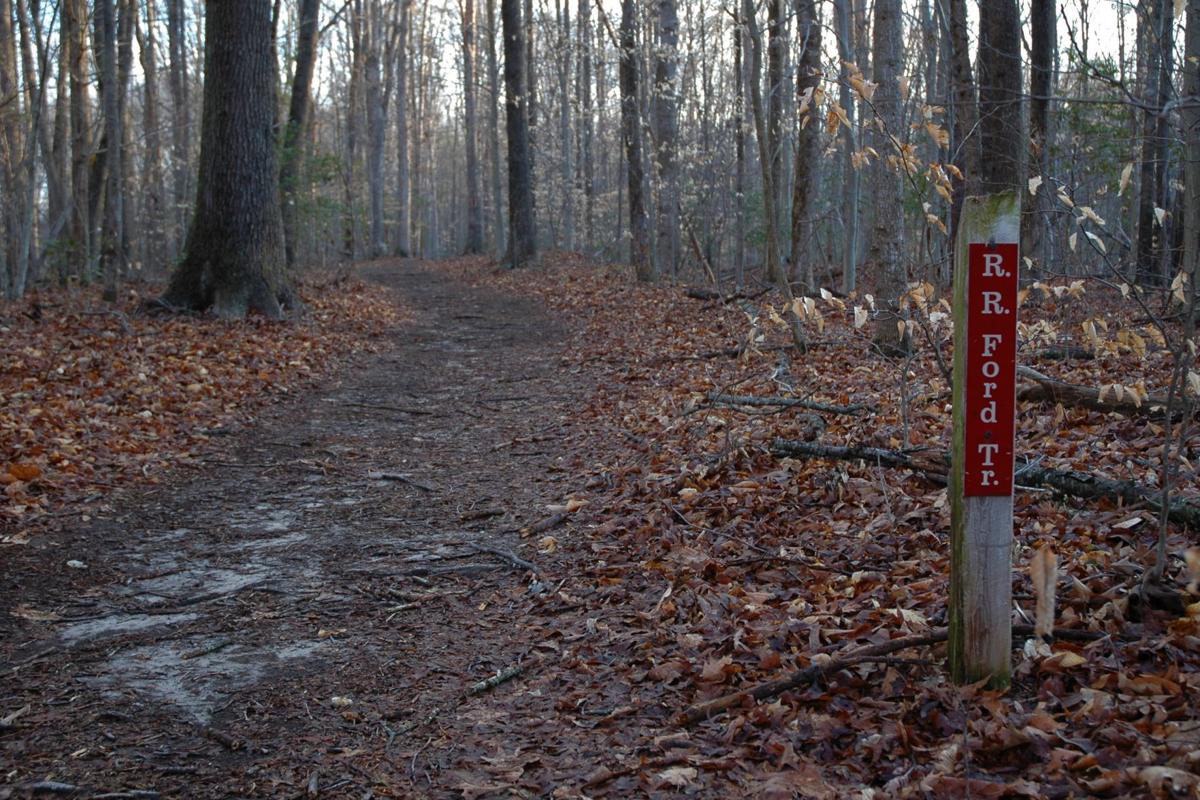 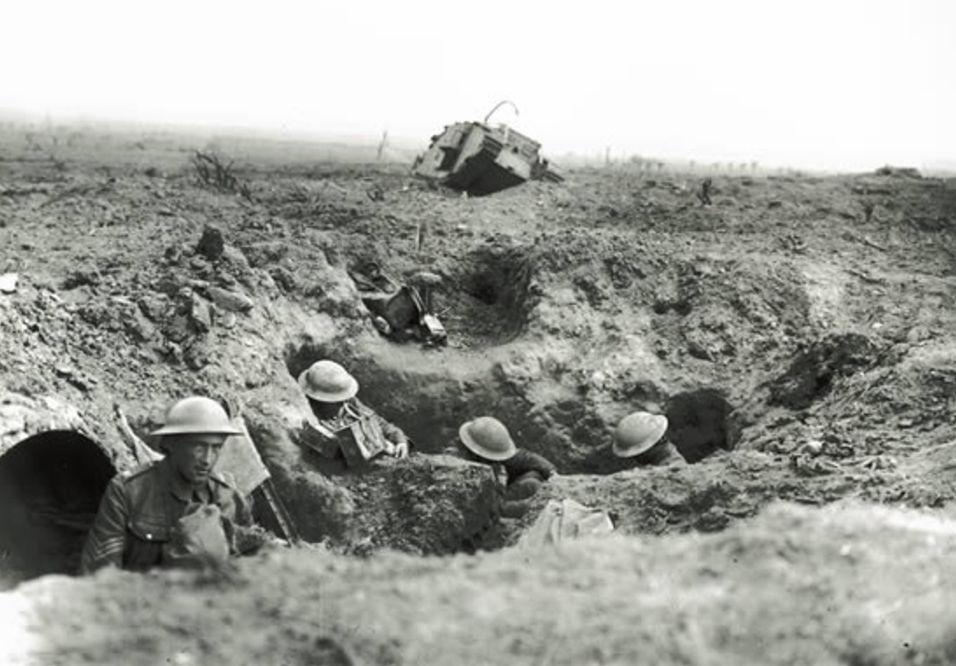 Undated photo shows U.S. soldiers in a trench in France during World War I. 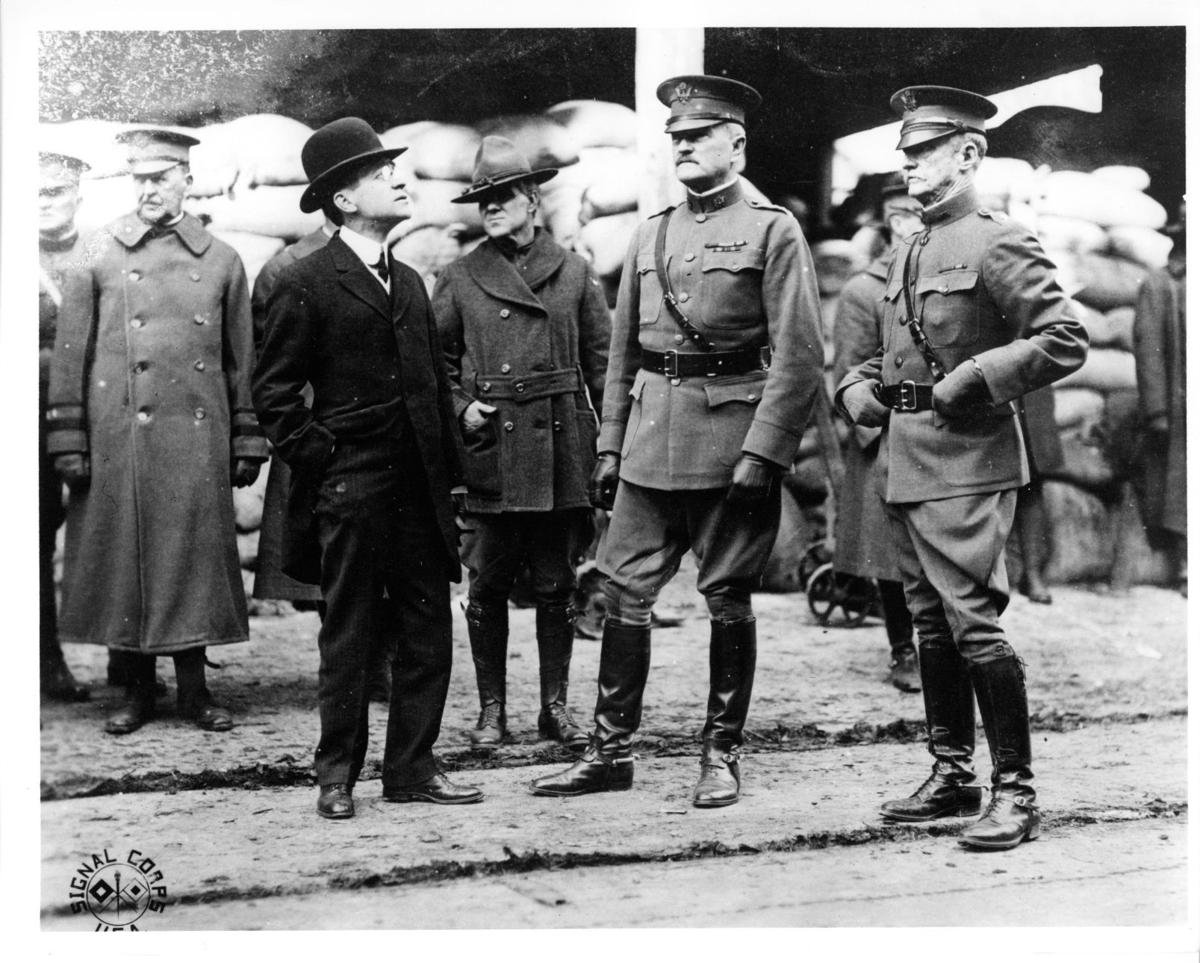 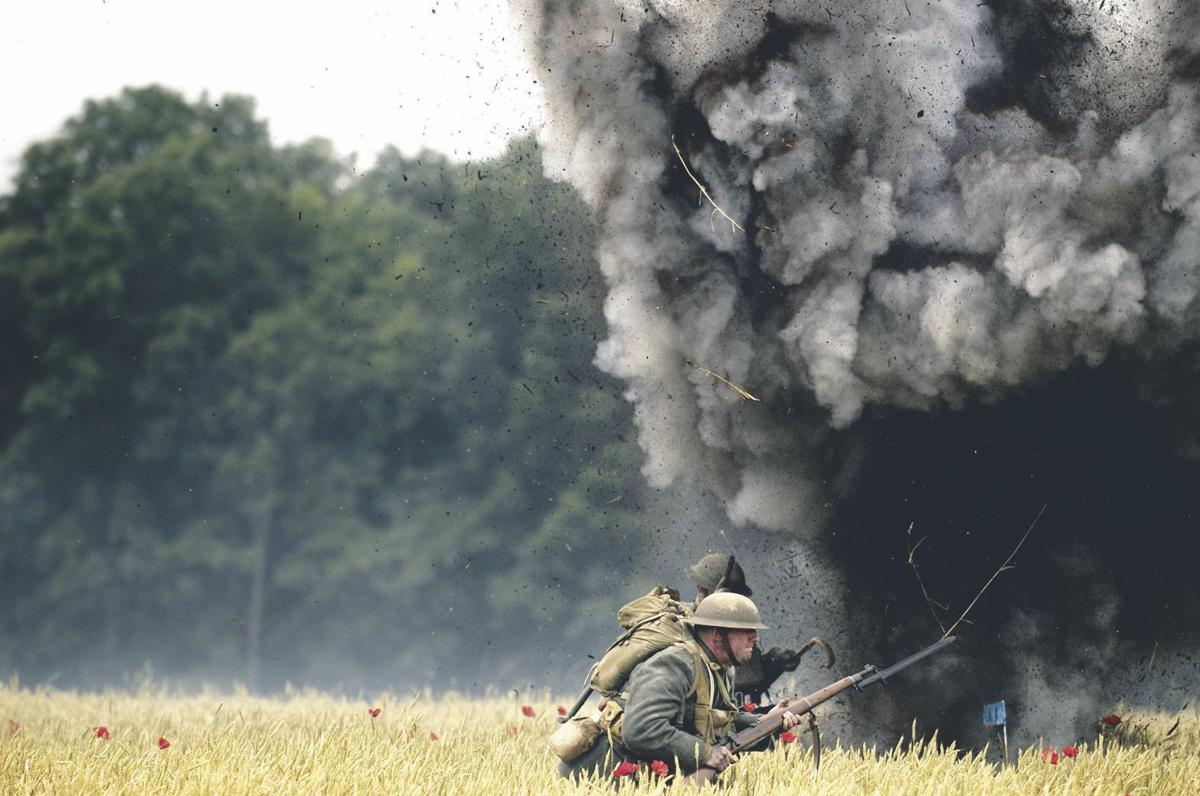 A pyrotechnic charge explodes during filming of a reenactment of the Battle of Belleau Wood in World War I at Inglewood Farm in Fauquier County on Tuesday, June 9, 2009.

Six heavy granite columns inscribed with names and topped with massive capstones memoralizes the hundreds of area soldiers who died in service to their country since World War I in Fredericksburg.

A Roll of Honor plaque at the Fredericksburg Area War Memorial honors World War I veterans.

A monument commemorates the service of Fredericksburg area guardsmen during WWI at the Mason–Ruhren Readiness Center in Fredericksburg.

A railroad trace in Lake Anna State Park dates to World War I.

Undated photo shows U.S. soldiers in a trench in France during World War I.

A pyrotechnic charge explodes during filming of a reenactment of the Battle of Belleau Wood in World War I at Inglewood Farm in Fauquier County on Tuesday, June 9, 2009.

Today is the 100th anniversary of the United States entering World War I, known as the Great War in some countries still and, according to many historians, the worst disaster to befall western civilization in the last 500 years.

Despite that, World War I is all but a non-event in America today, forgotten by time and overshadowed by other wars since then.

“Here we are in the centennial of it,” said John J. Hennessy, chief historian of Fredericksburg and Spotsylvania National Military Park, who is authoring an exhibit on the war for the Fredericksburg Area Museum. “And hardly anyone in the U.S. is paying attention to it.”

Part of the reason for this is timing. The U.S. entered the war three years after it started in 1914 and suffered proportionally fewer casualties than almost any other country involved, including nations such as Belgium and Canada that have only a fraction of the total U.S. population.

So, how did the war affect Fredericksburg, a southern town still recovering form the Civil War with fewer than 6,000 people in 1917?

“The World War I story is not told very often in Fredericksburg,” said Sara Poore, president and CEO of the Fredericksburg Area Museum. “It didn’t affect us much until later, because we were so far away.”

Ironically, the war’s biggest legacy may be not its immediate impact on the people who lived through it at all, but on Virginia’s economy today.

With $53 billion in defense spending last year alone, Virginia ranked first, ahead of every other state including California and Texas, according to the National Conference of State Legislatures’ website. World War I-era military bases just in Virginia employ nearly a quarter of a million people today.

Marine Corps Base Quantico alone, for example, employed more than 28,000 civilian and military workers and pumped nearly $5 billion into the economy in fiscal year 2015, the most recent year for which data is available, according to its public affairs office.

All of it is an indirect consequence of WWI.

When the U.S. went to war in 1917, it lacked both the infrastructure and the soldiers to fight it. The Army, Navy and Marines combined counted barely 200,000 personnel, ranking somewhere behind Serbia and nowhere near the world’s great powers.

To prepare for a huge number of new recruits—more than 4 million in two years—bases were needed, and fast. Within two months of declaring war, the government established 32 training posts all over the country. So quickly did this happen, in fact, that on at least one instance, a base was started right in the middle of a forest. As their first assignment, soldiers had to build their own barracks, mess halls, and other facilities before they could begin training.

Most of these training posts are long gone, but Virginia counts no fewer than eight bases that survive from that time. Fort Belvoir in Fairfax County, Fort Lee in Petersburg, Langley Field in Hampton, Norfolk Naval Station and Quantico Marine Base all got their start in 1917. Dahlgren, Fort Eustis in Newport News and the Naval Weapons Station in Yorktown came along the following year.

Otherwise, there are few local, tangible reminders of the war, as would be expected for a conflict where the nearest battlefields were an ocean away.

The Ghost Fleet, comprised of more than 200 transport ships whose hulls are rotting in the Potomac River, can be found in Charles County, Md. In Spotsylvania’s Lake Anna State Park, a railroad trace built during the war to haul ore from a nearby mine in the county to nearby Mineral can still be seen. It now forms part of the park’s trail system.

The war also led to a cultural cleansing, with anything German oftentimes being renamed. Sauerkraut became liberty cabbage and hamburger, liberty steak.

To be sure, not all of these name changes stuck, but others were more permanent. Fredericksburg’s Prussia Street was renamed Lafayette Boulevard during the war.

Unfortunately, German bashing did not end there. Americans of German descent sometimes had their loyalty questioned just for having the wrong last name.

“Lots of Schmidts changed to Smith,” said Stafford County resident Glenn Hyatt, former commander of American Legion Post 55, which was founded in 1919 by World War I vets. His own grandmother changed her last name from Von Nordhoff to Nordolf, he said.

Hyatt stands out in a region where many people are still obsessed with the Civil War. His passion for all things World War I has taken him to France to walk the ground where “the Fredericksburg people fought,” he said. Yet, he is unsentimental about its politics.

“It was a silly ass war that we didn’t have to get into,” he said.

When the veterans returned, they resumed their civilian lives, and many became leaders in the community. Josiah P. Rowe Jr., who had been a pilot in France, merged two existing newspapers into The Free Lance–Star in 1926 and published and edited the paper for the next 23 years.

“Everyone was worried about the ‘Hun’ coming up the Chesapeake Bay to attack the U.S.,” said retired National Guard Lt. Col. David K. James, president of the Fredericksburg Guard Association. “They didn’t actually fight, but they protected.”

Despite its limited impact on Fredericksburg, the war still reverberates to the present day, Hennessy said.

“It marks the end of governments based on royalty and monarchies. It completely redrew the map of Europe. It set alliances that still exist. The world we know today was born in World War I.”

The Fredericksburg Area Museum will open its exhibit “World Aflame: A Hometown in Two World Wars” on April 23.

100 years later, remembering those who served

Wars, it has been said, are fought by nations, but are experienced by individuals.