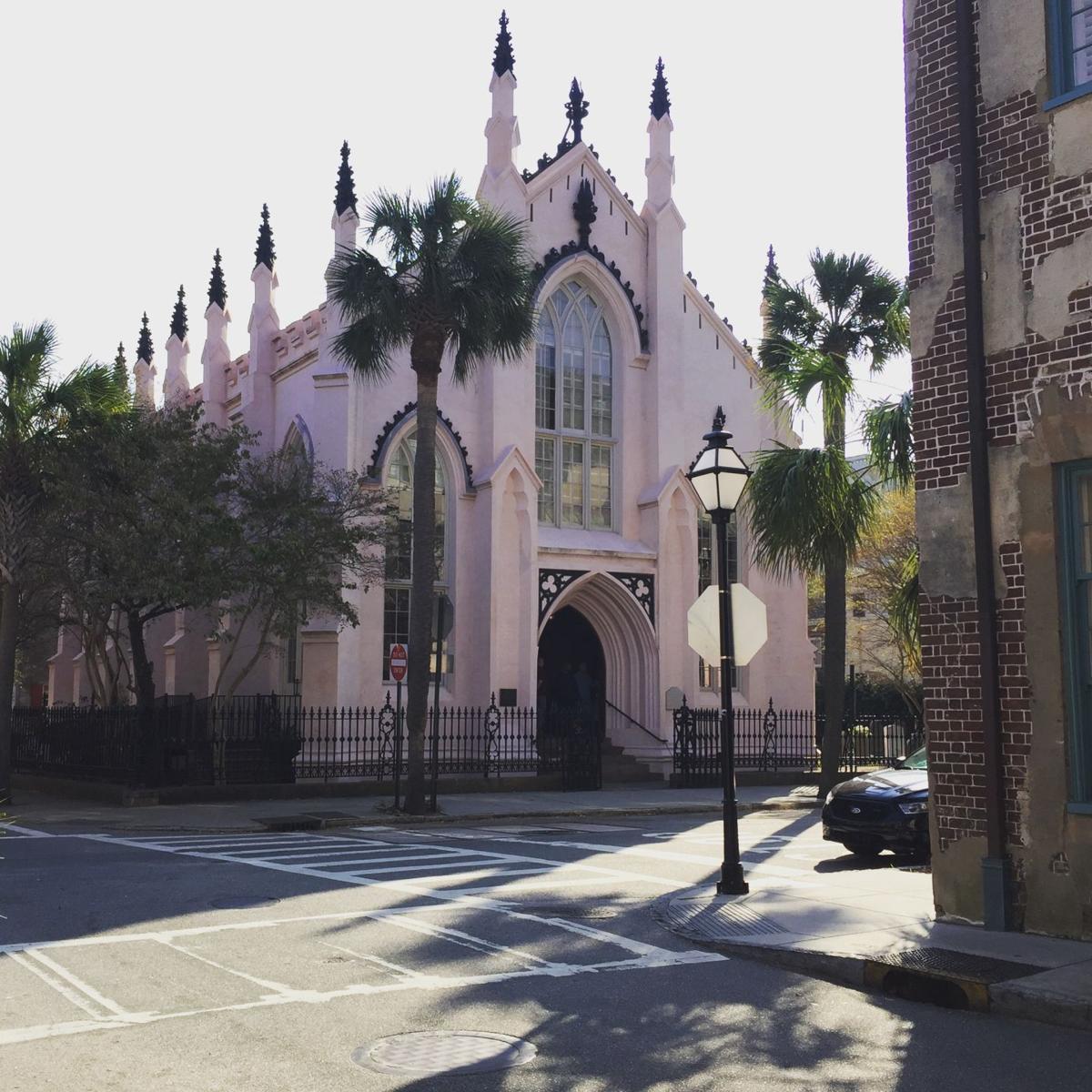 The French Huegenot Church is a stunning example of Gothic revival architecture on Church Street. 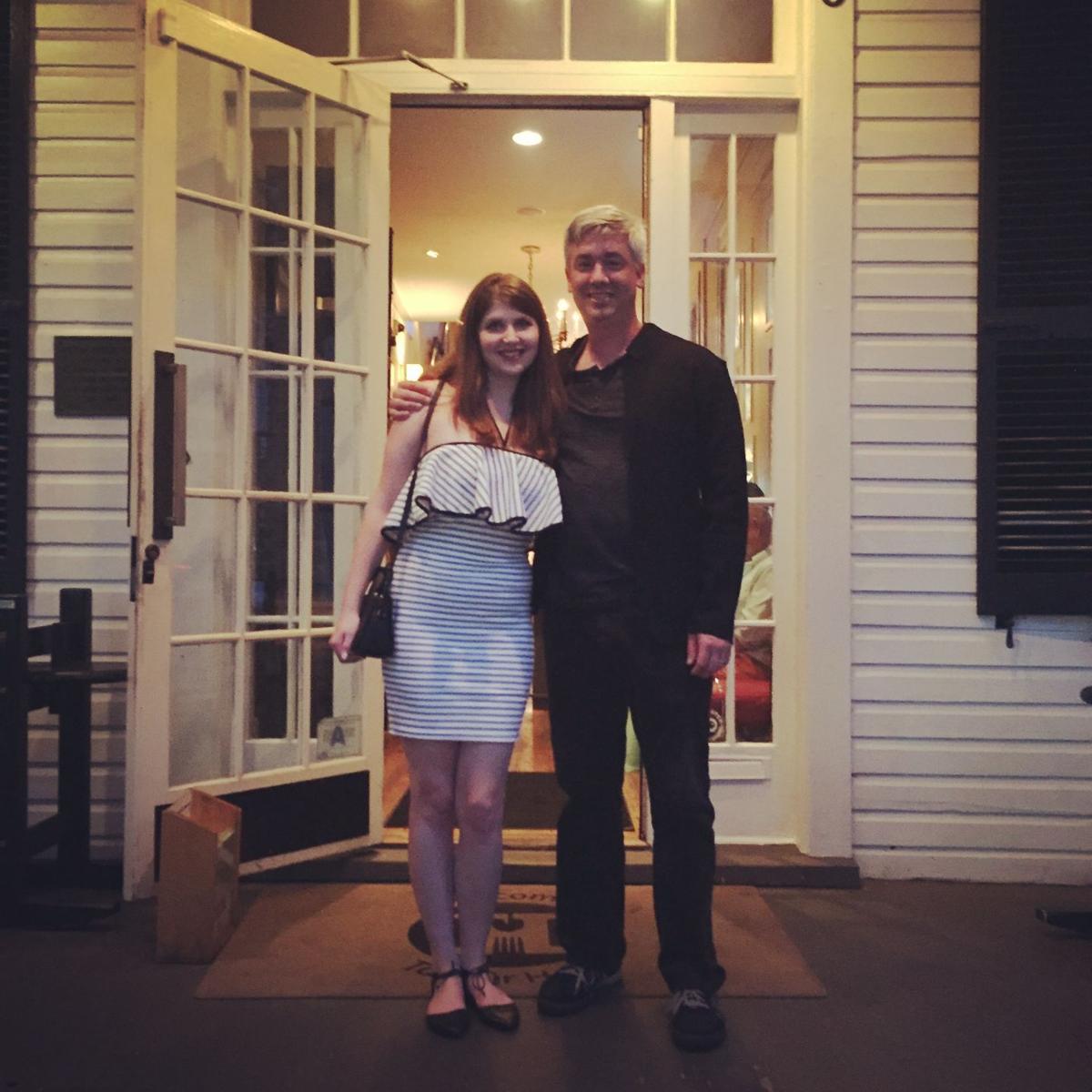 The honeymooners, Lindley and Matt Thomas, beam outside of the renowned restaurant Husk.

Passengers enjoy a panoramic view of Charleston’s waterways on a sailboat, the Schooner Pride. 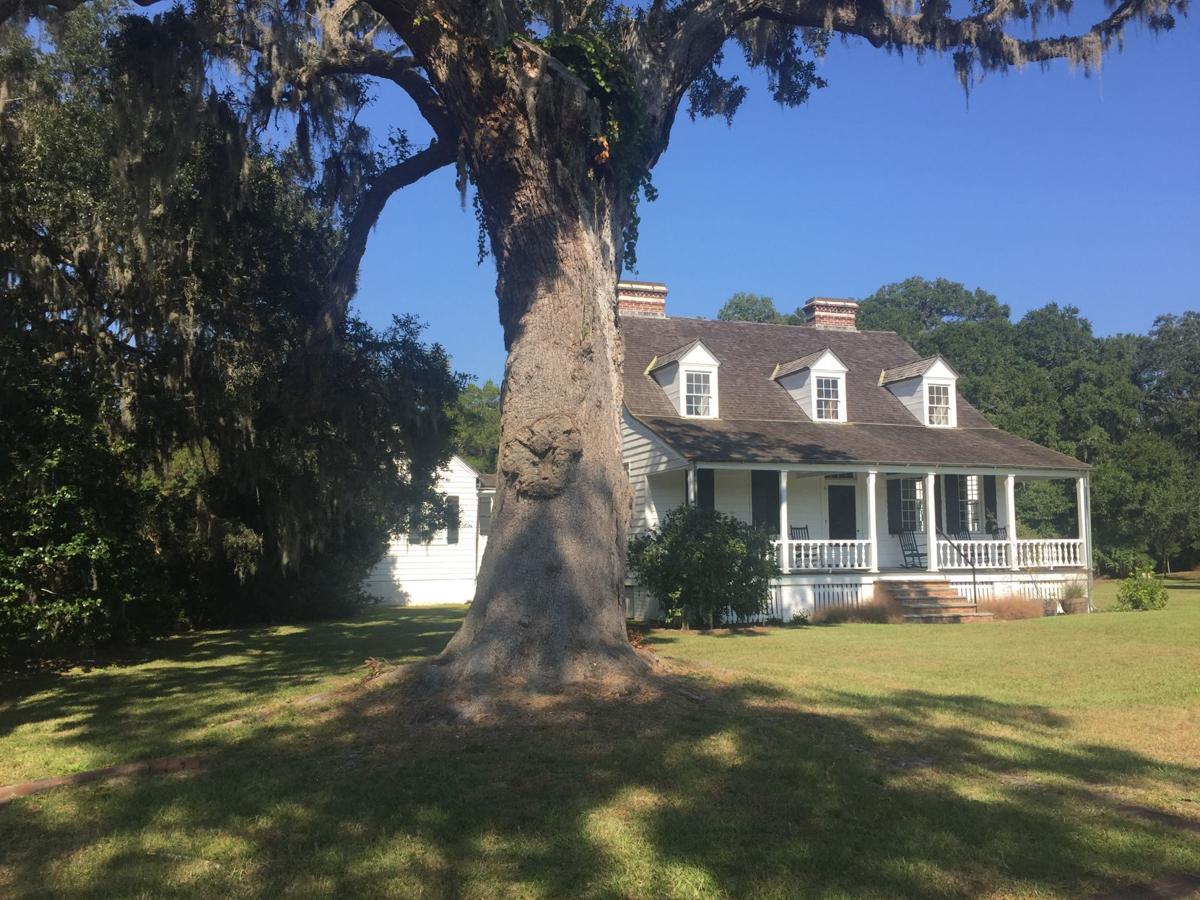 The Charles Pinckney Historic Site tells the story of a ‘forgotten founder’ and the lives of slaves. 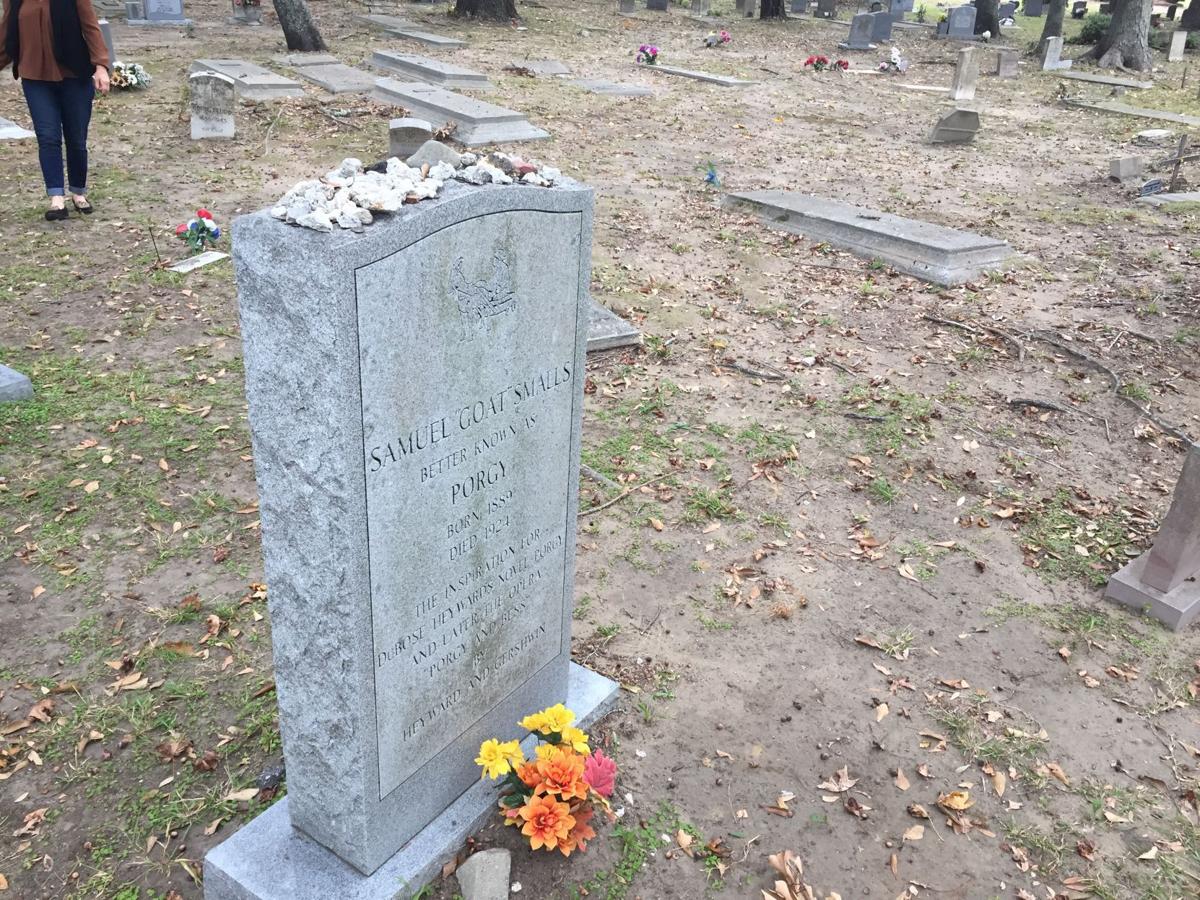 Among the notables buried in Charleston is Samuel ‘Goat’ Smalls, who inspired ‘Porgy and Bess.’ 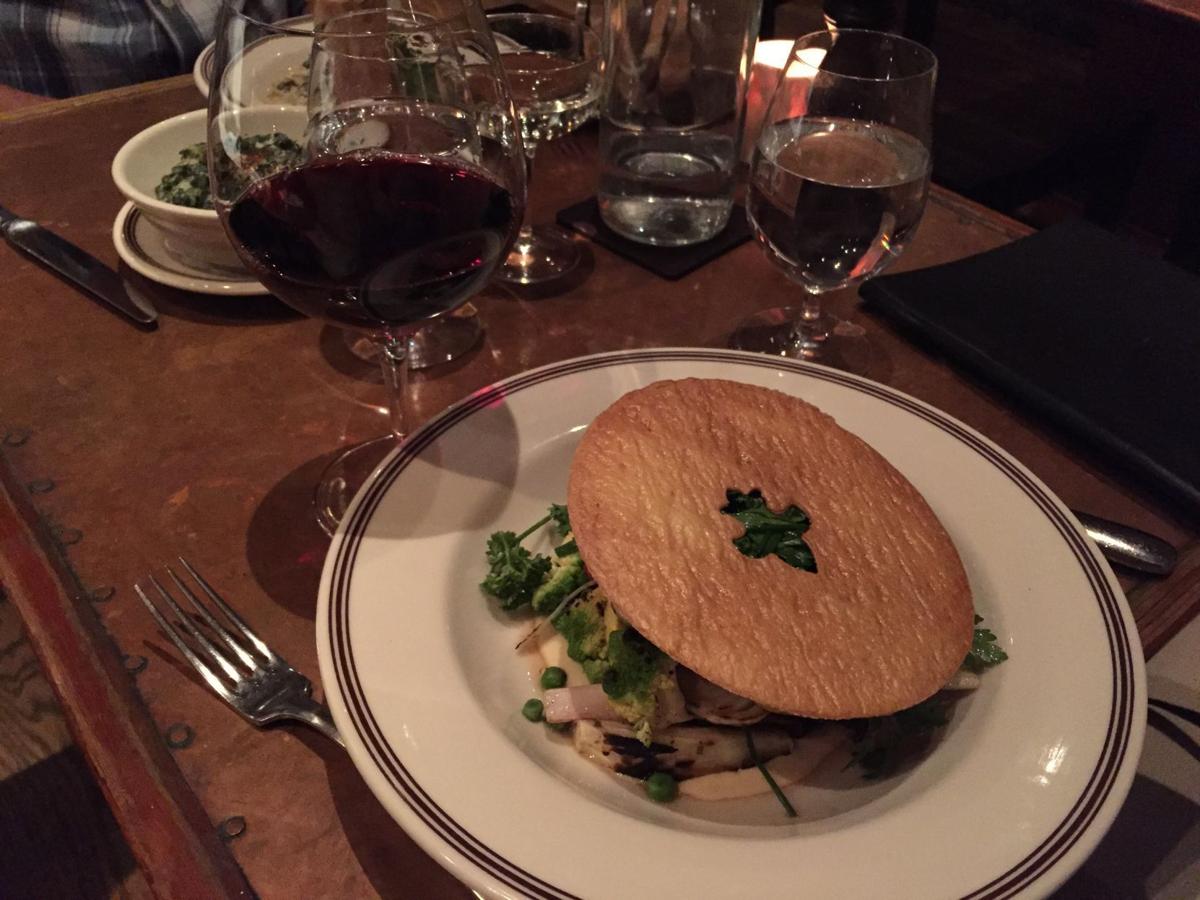 Grilled vegetables, crusted with garlic soubise at McCrady’s Tavern, one of many fine restaurants. 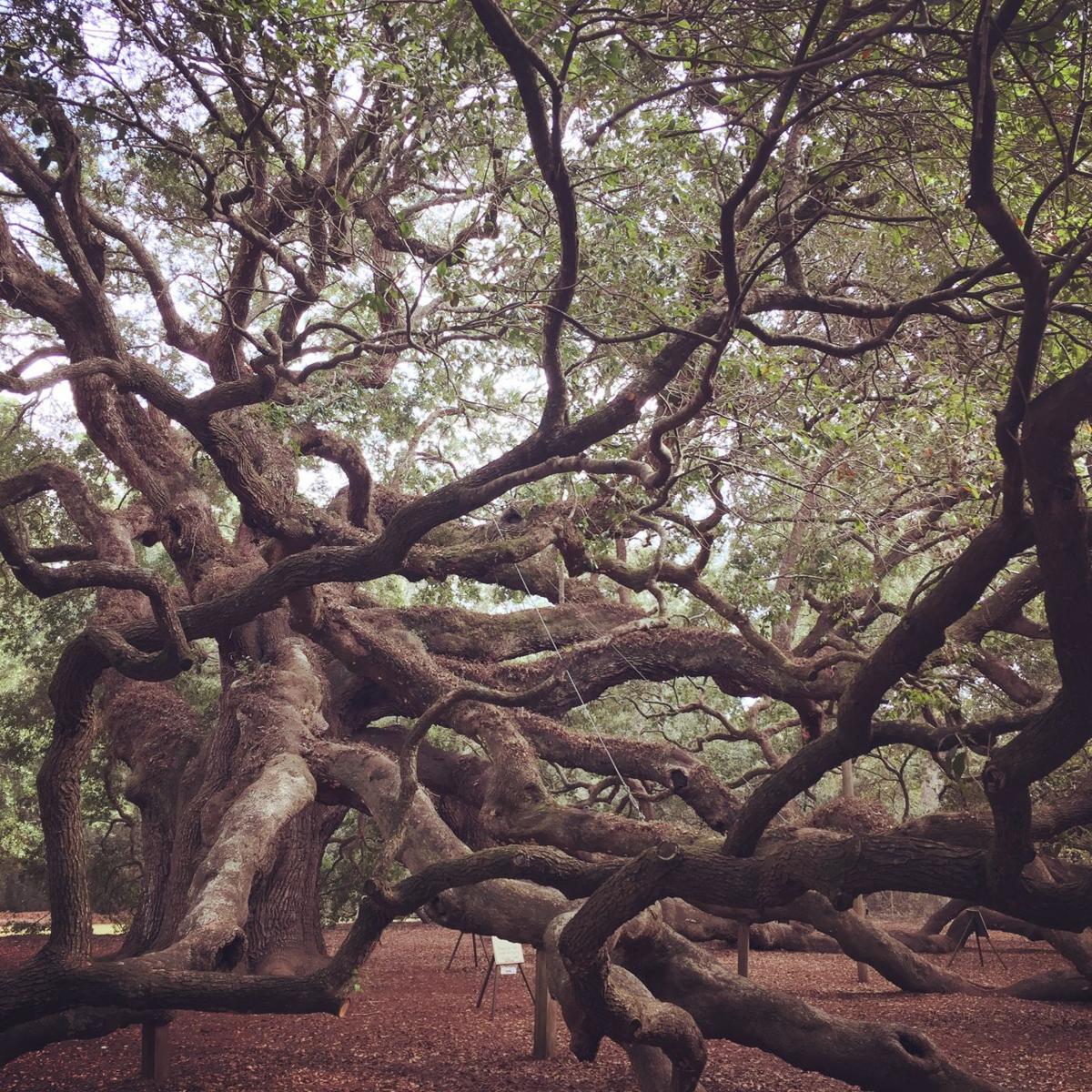 The Angel Oak tree, estimated to be 500 years old, on Tom’s Island.

The enormous Angel Oak Tree on Johns Island is estimated to be 400 to 500 years old.

The French Huegenot Church is a stunning example of Gothic revival architecture on Church Street.

The honeymooners, Lindley and Matt Thomas, beam outside of the renowned restaurant Husk.

Passengers enjoy a panoramic view of Charleston’s waterways on a sailboat, the Schooner Pride.

The Charles Pinckney Historic Site tells the story of a ‘forgotten founder’ and the lives of slaves.

Among the notables buried in Charleston is Samuel ‘Goat’ Smalls, who inspired ‘Porgy and Bess.’

Grilled vegetables, crusted with garlic soubise at McCrady’s Tavern, one of many fine restaurants.

The Angel Oak tree, estimated to be 500 years old, on Tom’s Island.

The enormous Angel Oak Tree on Johns Island is estimated to be 400 to 500 years old.

Looking back, I’m glad we took the night train to Charleston.

Arriving at 5 a.m. to a city’s working-class neighborhood and walking, sleep deprived, into an unknown street is a good way to discover the grit and reality of a place.

My husband and I were whisked away from North Charleston by taxi, and we watched the city wake up as we arrived at the luxurious Belmond Charleston Place. The city’s distinctive architecture, vibrant food scene and temperate climate had led us to pick the Holy City as our honeymoon destination.

But something sinister was lurking in Charleston—something that’s been there since the city was founded. We could hear it in the voice of our Uber driver one night, who after picking us up from yet another excellent dinner, worried about race riots breaking out.

We could see it in the television trucks lined up outside of the courthouse as former police officer Michael Slager was tried for the shooting death of Walter Scott.

And across the street in the U.S. District Court, the jury pool was being selected for the trial of Dylann Roof, who stands accused of killing nine people in a mass shooting at the Emanuel African Methodist Episcopal Church.

So how does one stomach three courses while racial inequity is so rampant down the street? How does one sip cocktails as the sun casts golden light over Charleston’s trademark single houses, knowing they were all built on the back of the slave trade?

We decided to confront it in the hopes of going home a more informed couple, ready to tell our friends about the real and moving history we experienced there.

We saw evidence in an issue of the Charleston Post and Courier. Reporters Glenn Smith and Jennifer Berry Hawes published a story headlined “From over 500 will come 12 to judge Roof” while we were there.

“The trials are taking place in a city that still struggles with a tangled and thorny history on race, from its ignominious role in the slave trade to the dark days of the Jim Crow era,” the story read. “Both verdicts will show if the community grasps the severity and depth of Charleston’s racial divides.”

So where does one go to find the real history of Charleston devoid of the niceties polite Southern society requires?

We found it on Charleston native Al Miller’s Sights and Insights Tour. His 2 1/2-hour bus excursion through the city, James Island and Johns Island takes visitors to the heart of African-American culture there.

We saw the longstanding neighborhoods on the sea islands where members of the Gullah culture live just a stone’s throw away from the former plantations where their ancestors toiled.

His tour stopped at the famed Angel Oak Tree and the Burn Church Cemetery to illustrate how the graves of white people were separated from those of black parishioners. The cemetery also hosts the grave of Samuel “Goat” Smalls, the inspiration for George Gershwin’s Charleston-set opera “Porgy and Bess,” which Miller knows by heart and sang throughout the trip.

But most affecting was driving by Emanuel AME, as Miller told us about the five people he knew who were killed there and what their memory means to the community.

We found the real history of Charleston at Martha Lou’s Kitchen, an institution in Southern cuisine just outside of town. The soul food there was so delicious, I forgot I was a vegetarian for a moment and downed collard greens specked with ham, and beans similarly peppered with smoky meat. It’s not the kind of place to ask the waiter whether there are options for particular diets, but no diner can go wrong picking from its rotating menu of specials.

We found real history at the Charles Pinckney National Historic Site, run by the National Park Service. The site preserves the property of a “forgotten founder,” but also the lives of enslaved African–Americans on South Carolina Lowcountry plantations and their influences on Pinckney.

We found that history at The Old Slave Mart Museum, a former slave auction house turned museum that shows the lives of the enslaved people and the traders who passed through it. The museum delved into how the slave trade built all of the beauty tourists flock to see. It’s the kind of historical site America needs more of.

We also did what we had originally set out to do in Charleston: consume our weight in cheese, fried chicken and bourbon.

We stumbled upon what turned out to be our favorite bar. We ducked in to Cane Rhum Bar & Caribbean Kitchen because I had fallen in the street and needed a place to bandage up. What I found there was the best Painkiller cocktail I’ve ever had—and I’ve had many of the rum, orange, pineapple, coconut and nutmeg concoctions. My new husband tried two of the bar’s original cocktails, which were equally powerful revelations. The bar manager even found Band–Aids for me.

We also enjoyed the drinks at the Belmond, where the bartender gave us great restaurant recommendations. My one regret? That I didn’t try one of their homemade pop tarts with the drinks. He pointed us to Leon’s Fine Poultry and Oysters, another delight, for lunch the next day.

The Gin Joint, on our list from the beginning, added to the great cocktail scene we found in Charleston. I had the Charlie Brown cocktail, bourbon-forward with hints of smoked sea salt, lemon, amaro and a peanut-cola cream liqueur. It came in a coke bottle and surpassed my wildest thoughts of what a peanut and coke combo could be.

And then we ate. While Martha Lou’s Kitchen was the culinary highlight of the trip, Hominy Grill was so nice we visited it twice. Lunchtime pimento cheese and a vegetable plate for dinner with macaroni and cheese, tomato pudding and lima beans were superb.

While locals did their best to steer us away from Husk, we thoroughly enjoyed Sean Brock’s Charleston outpost. Vegetarians, beware, everything has bacon in it. We only wish we had time to go back.

The Ordinary, an oyster and cocktail bar, was one of my husband’s favorites. After appetizers there, we ventured to Xiao Bao Biscuit, which offers multicultural Asian cuisine in a trendy converted gas station. The highlight of the meal was the restaurant’s cabbage pancake.

McCrady’s Tavern was another favorite. I still dream of their Drinkin’ with Stiggins cocktail—a mélange of pineapple, Swedish punsch, chartreuse and spices—among the best drinks I had in the city. While McCrady’s faltered a bit in service, it surpassed our expectations in taste. The vegetarian option sounded simple—grilled vegetables, croustade and garlic soubise—but it was packed with flavor. My husband’s calf’s head soup and escargot-stuffed marrow bone were just decadent enough. The atmosphere of the restaurant, tucked into Unity Alley off East Bay Street, couldn’t be beat.

We didn’t hit any breakfast spots because the hotel was so accommodating. Staying at the Club Level, every morning featured a complimentary breakfast. I had quiche, fruit and coffee while overlooking the city and reading. The Club Level’s perks also included complimentary alcohol, afternoon tea, hors d’oeuvres and dessert every day. I got used to my evening glasses of champagne.

Located in the heart of the city, the hotel was a fortress. With multiple restaurant and luxury shops, a spa and open-air saltwater pool, one would never have to leave the Belmond Charleston Place to have a perfectly nice vacation.

Located where it was, we ended up traipsing through a fair number of tourist traps, and my favorite was The Pepper Palace. I could spend hours trying their hundreds of hot sauces, and came away with a few favorite bottles.

And then there was the shopping. Designer women’s clothing shop Madison Mathews, located along my favorite stretch in Charleston, Church Street, was in the middle of a great sample sale when we visited.

The Editor was also a great find. Set up like an apartment, with clothes, gifts and housewares, it was hard to leave without an entire new wardrobe.

We also visited a few of Charleston’s many art galleries. I found pieces at both The Spencer Art Gallery and Courtyard Art Gallery. We stopped in for a show of Gogo Jewelry at Helena Fox Fine Art, as well, and were taken by how delicate pieces made out of rattlesnake vertebrae could be.

So after a week, we boarded a train home with full bellies, paintings, sweetgrass baskets and memories of those charming single houses.

And back in Charleston, the court battles are still raging on.