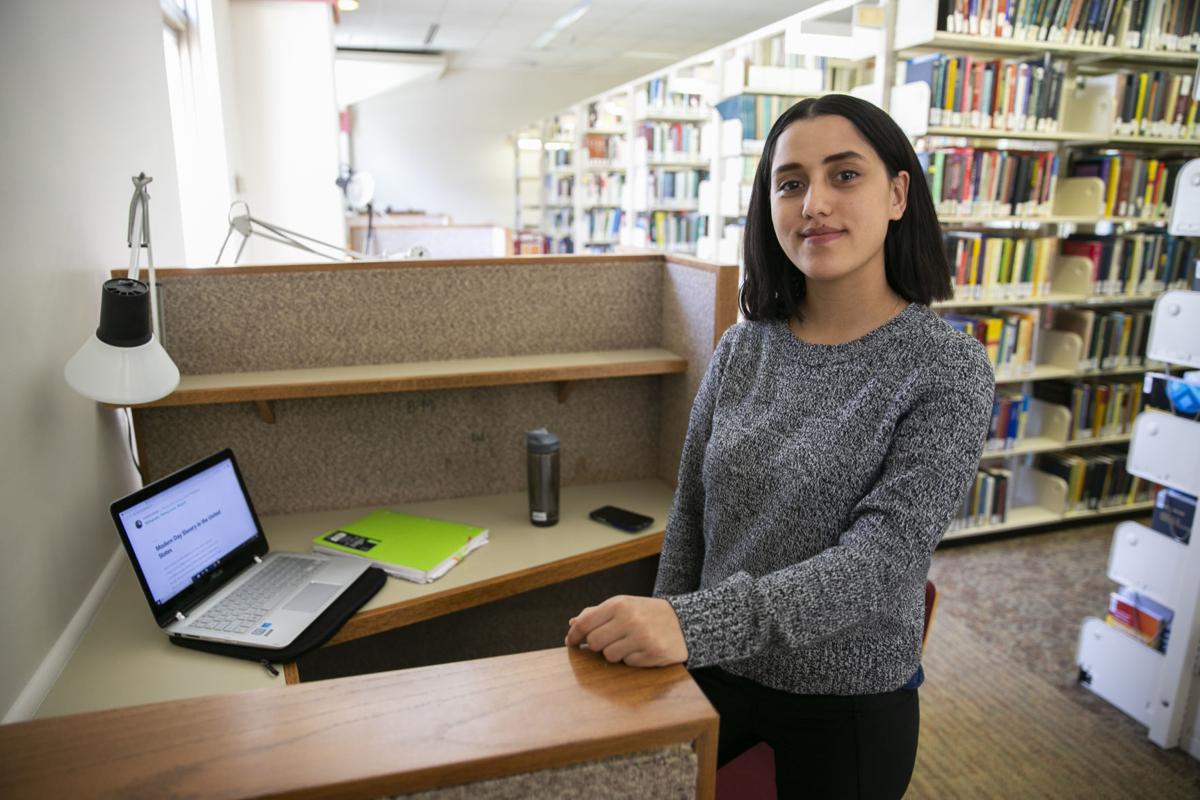 Pratima Kandel stands in the Simpson Library at the University of Mary Washington. A computer science student from Nepal, she has been working on a research project about human trafficking. 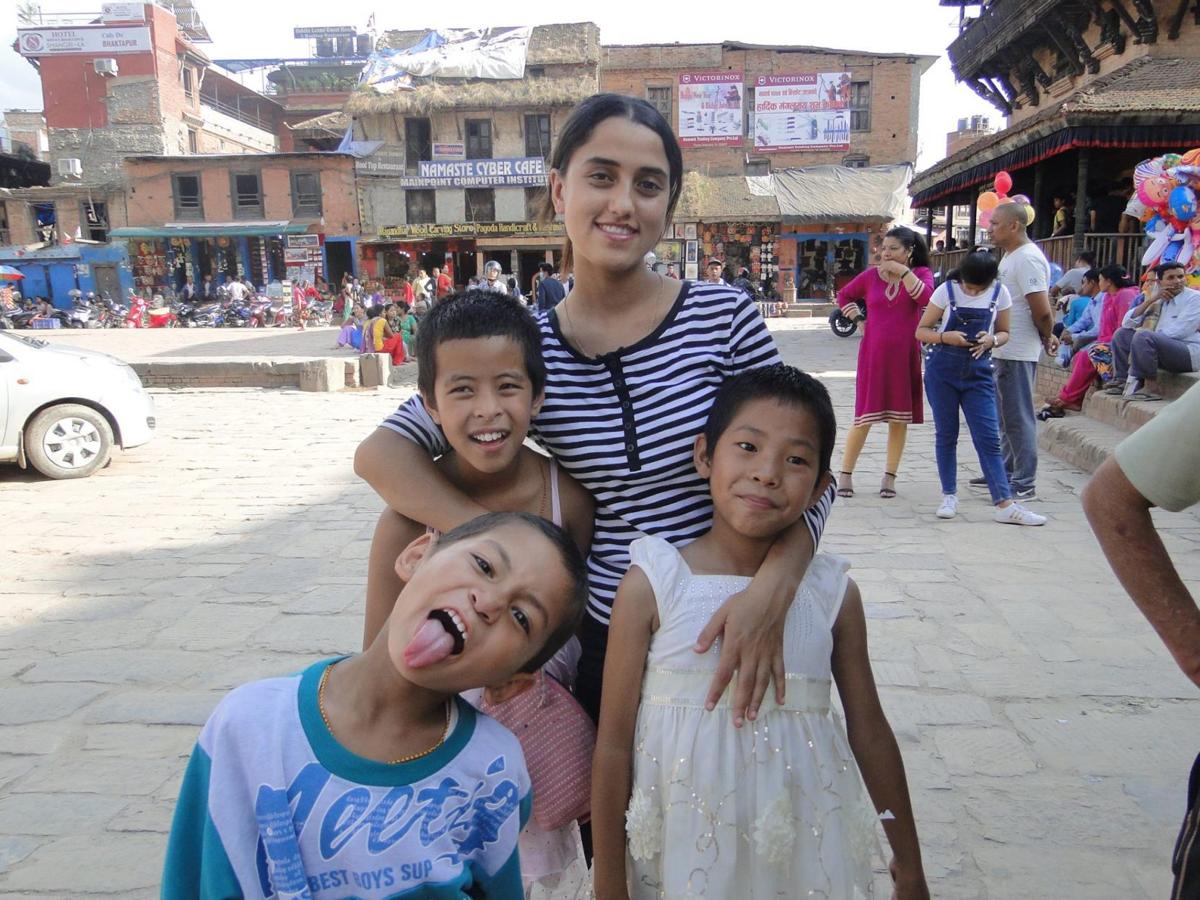 Pratima Kandel poses in 2017 with some of the children who live in her family’s orphanage, Sagarmatha Children’s Home, in Bhaktapur, Nepal. 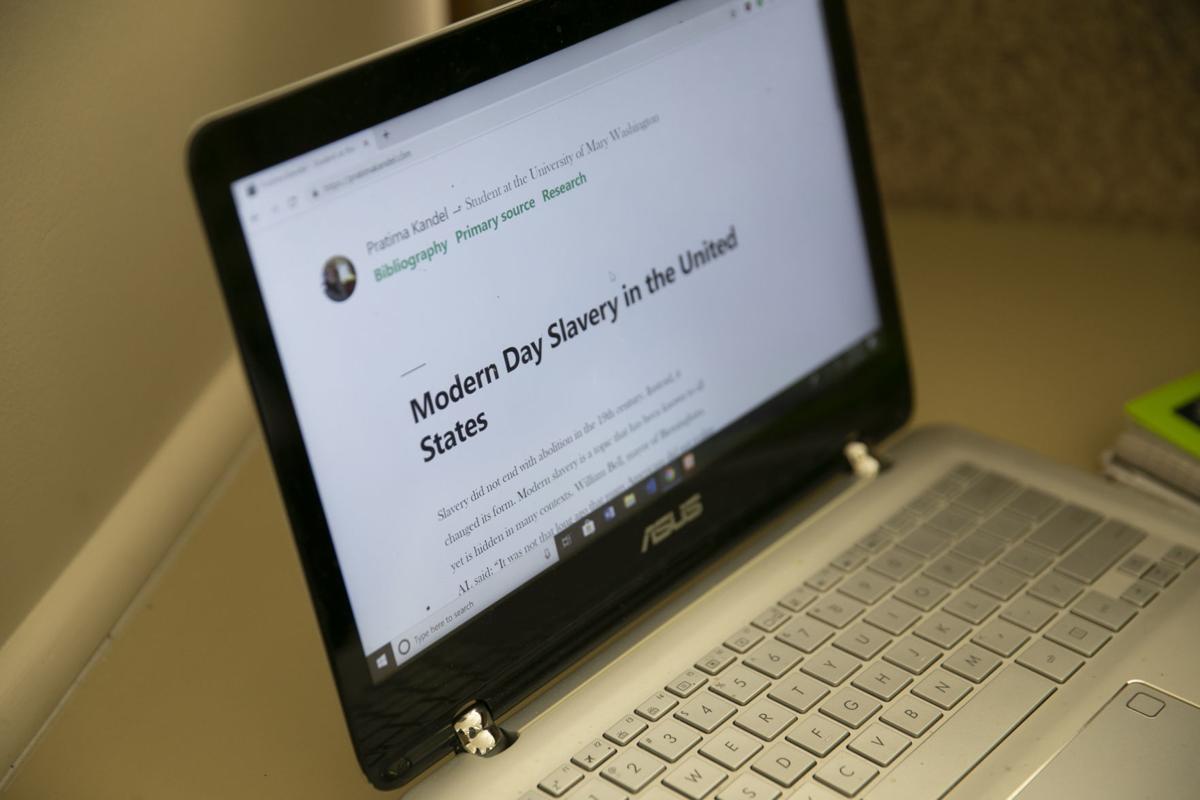 Kandel’s experience with orphans in Nepal gave her a special understanding of the toll trafficking takes.

Pratima Kandel stands in the Simpson Library at the University of Mary Washington. A computer science student from Nepal, she has been working on a research project about human trafficking.

Pratima Kandel poses in 2017 with some of the children who live in her family’s orphanage, Sagarmatha Children’s Home, in Bhaktapur, Nepal.

Kandel’s experience with orphans in Nepal gave her a special understanding of the toll trafficking takes.

Pratima Kandel chose modern-day slavery as the topic for her American Studies class, thinking she’d focus on big cities where immigrants—maybe even people from her homeland of Nepal—were forced into labor or sex against their will.

Then, she learned that human trafficking can take place anywhere, even in seemingly idyllic small cities in the United States.

“Literally, I was doing research and saw it’s happening in Fredericksburg, and it was really shocking to me,” said the University of Mary Washington student.

As she started reading news stories about the issue, including a three-part series in The Free Lance–Star in late February, she began sharing information with those around her. Her research paper almost became a personal campaign, as she became more vigilant about personal safety and the potential for being lured into a trafficker’s web. She spread the word to others to raise public awareness.

“It was like, all of a sudden a light went on, and she embraced it,” said Carol Mauro, a Stafford County resident who knows Kandel. “This topic has become an eye-opener for her, and the more research that she’s done, the more she’s become involved.”

While the traditional scenario of human trafficking involves bringing immigrants to America and forcing them into labor or prostitution, local women have been lured into providing sex in exchange for money, food or drugs. Traffickers increasingly are targeting young people, ages 14 to 16, to the point that one out of five kids will be approached by a trafficker, said Bill Woolf, executive director of the Just Ask Prevention Project in Northern Virginia.

Even though Pratima Kandel grew up in a world where arranged marriages and the caste system were common among older residents, she’s benefited from a progressive upbringing, said Cindie Kelly. She and her husband, Fredericksburg Councilman Matt Kelly, met the Kandel family when the Kellys were part of a sister-city delegation to Kathmandu, Nepal, in fall 2017.

Pratima’s parents, Manoj Kumar and Gita Kandel, have four daughters and one son, and they share their home with 24 children who have been abandoned. They run an orphanage called Sagarmatha Children’s Home in Bhaktapur, Nepal, and provide health care, proper nutrition, cultural identity and education.

Mauro’s daughter adopted a child from the orphanage, and Mauro raises money to help other children still there. She sews colorful tote bags, cooks and bakes, and she quickly points out that those interested can sponsor a child through the Soarway Foundation at soarway.org.

As Mauro heard stories of civil war and political turmoil in Nepal, she learned that police regularly try to bring to the orphanage more boys and girls who were sold into slavery by their parents, then ran away from their new owners.

While Pratima Kandel helped tutor the children or organize soccer leagues and cultural events for them, she wasn’t really exposed to “the ugly part of their reality,” Mauro said. Her work in the American Studies class and the guidance of Assistant Professor Erin Devlin has changed that, Cindie Kelly said.

Pratima Kandel lives with the Kellys, and Cindie Kelly has watched the 21-year-old student gather stories of human trafficking victims. She’s seen the way their experiences impacted her.

All American Studies students have to a create a website featuring primary sources and a bibliography, and Kandel compiled videos and links from news agencies across the nation.

“The whole thing has been really eye-opening for her, and that’s what education’s supposed to do,” Cindie Kelly said.

Devlin said she hopes all students in her class use the research project as the chance to develop as scholars who are “willing to explore some of the most important questions shaping the communities they live in everyday.”

One story in particular from her research haunted Kandel. It was about a Mexican woman who estimates she was raped 42,300 times—30 times a day, seven days a week, from age 12 to 16.

“Who would do that to a child?” Kandel asked. “And why are these clients called ‘johns’ when they should be called rapists?”

Kandel is studying computer science and doing an internship with Dell this summer. She’d like to return to Nepal after she completes her education and open a software company to employ local residents.

“She wants to do something to help,” Kelly said. “She doesn’t know what, but she’ll figure it out.”