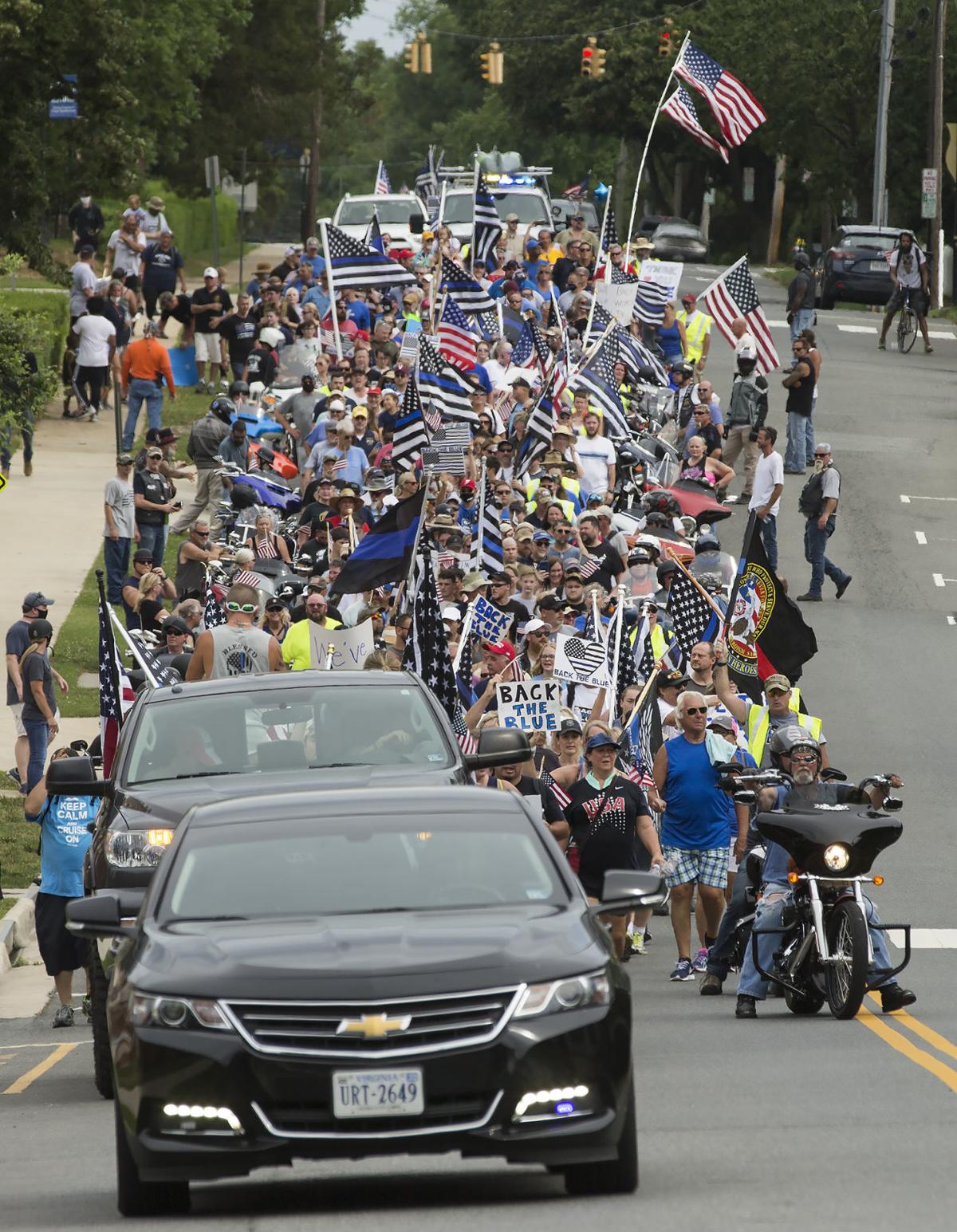 Back the Blue marchers travel along College Avenue in Fredericksburg en route to the police station Sunday. 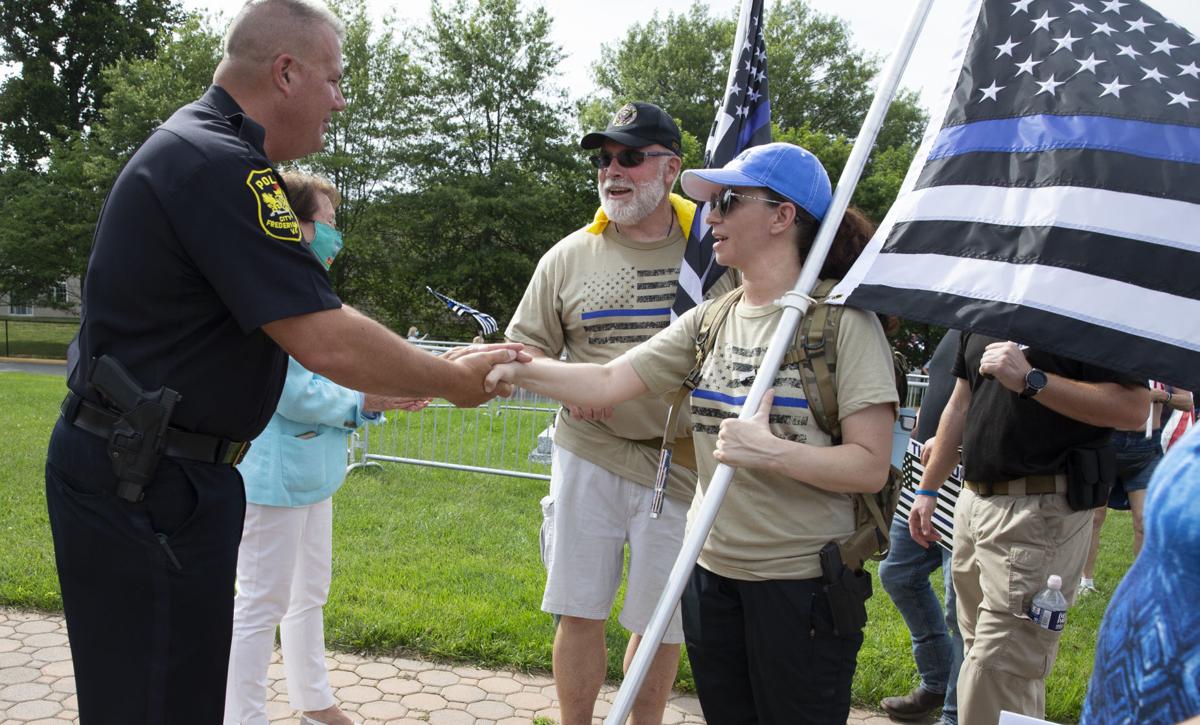 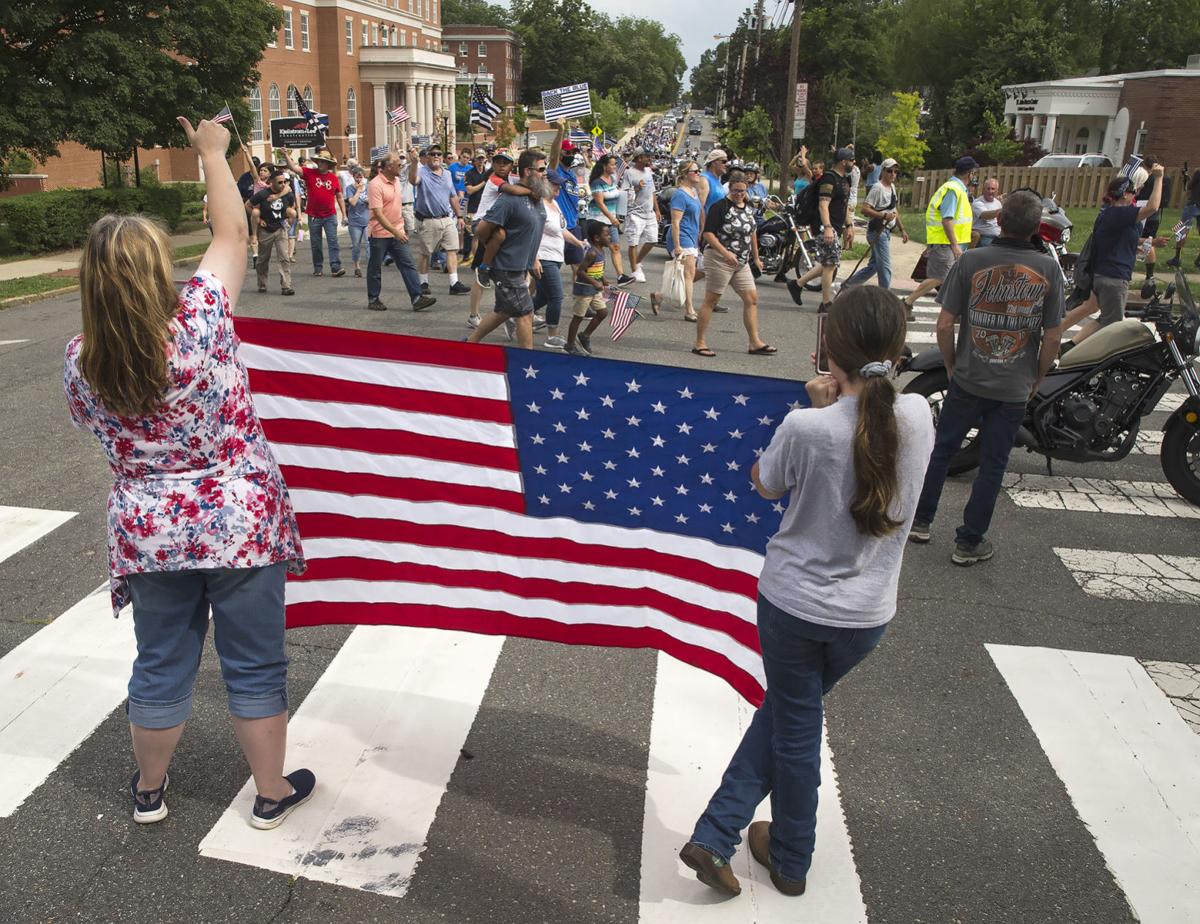 Robin Oakes and daughter Bailey show support for Back the Blue marchers in Fredericksburg. 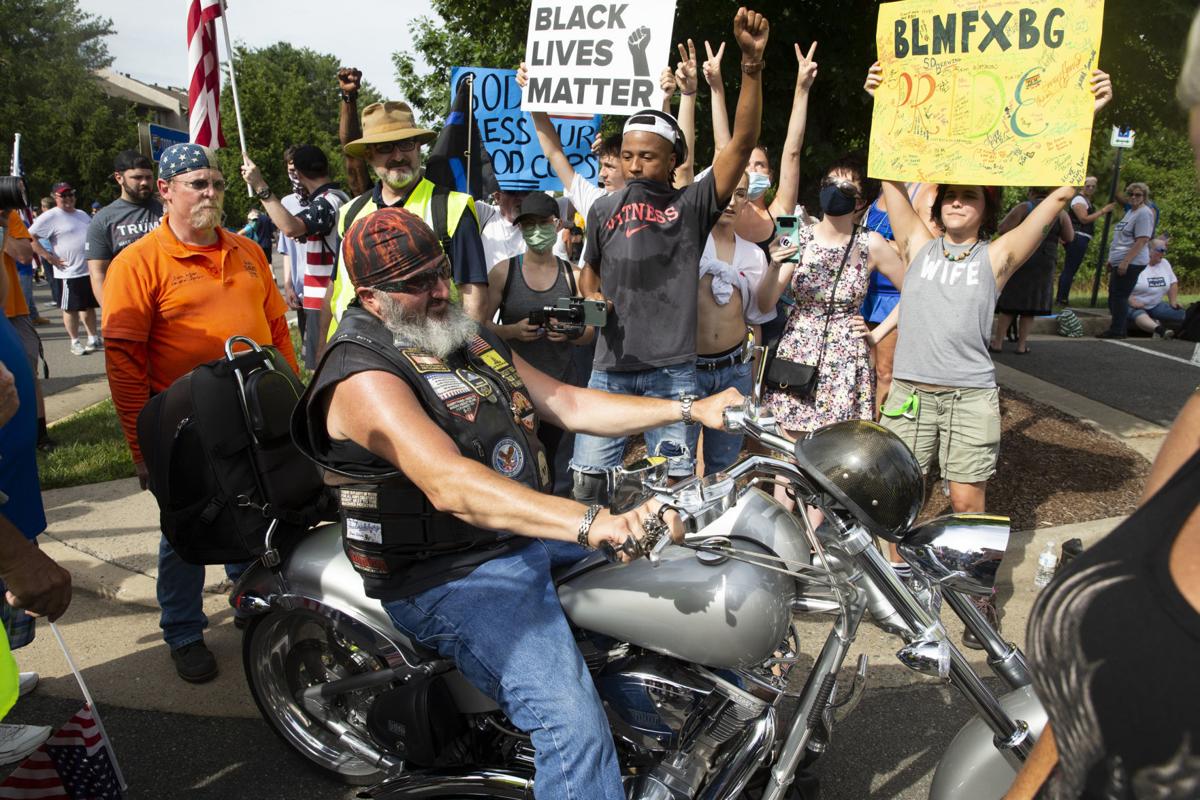 A motorcyclist revs his engine to drown out a small contingent of Black Lives Matter counter-protesters following the Back the Blue rally Sunday. 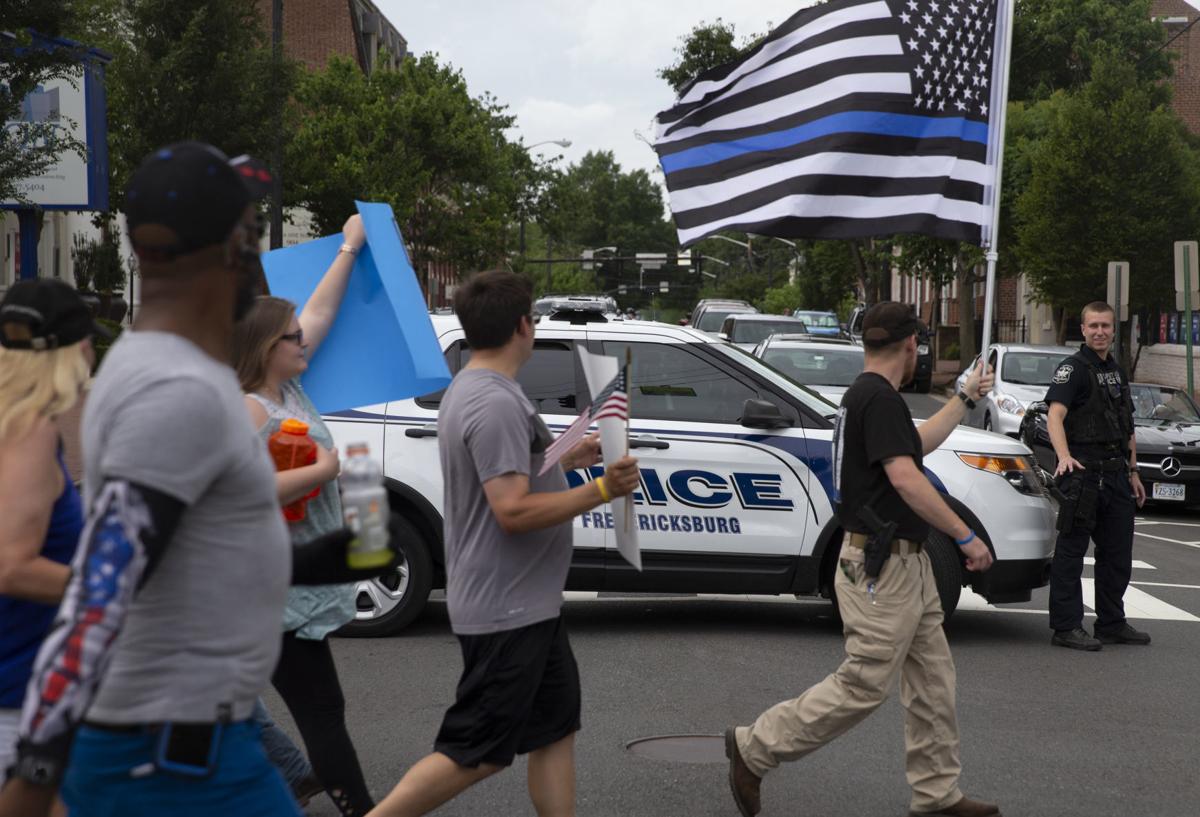 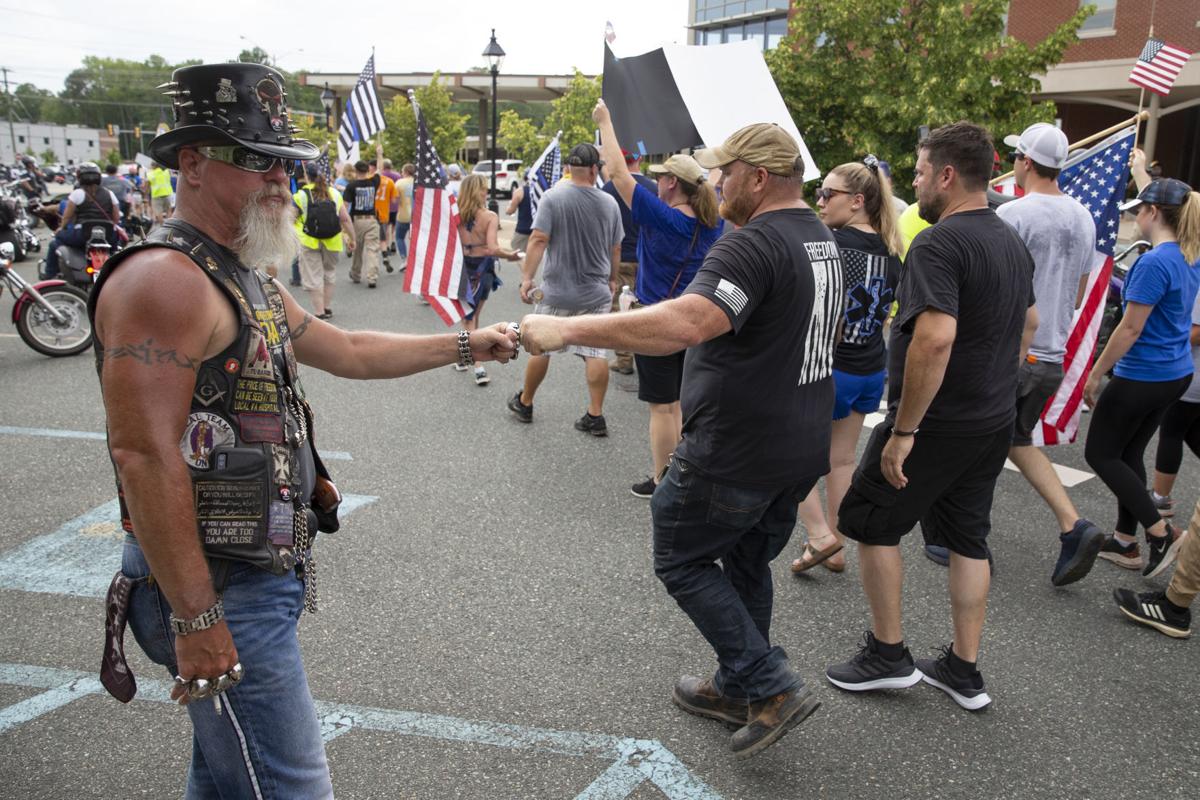 ‘Mad Mike’ Wade fist-bumps a participant during the Back the Blue march from Hurkamp Park.

Back the Blue marchers travel along College Avenue in Fredericksburg en route to the police station Sunday.

Robin Oakes and daughter Bailey show support for Back the Blue marchers in Fredericksburg.

A motorcyclist revs his engine to drown out a small contingent of Black Lives Matter counter-protesters following the Back the Blue rally Sunday.

‘Mad Mike’ Wade fist-bumps a participant during the Back the Blue march from Hurkamp Park.

The throaty roar of more than 100 motorcycles arriving at Hurkamp Park in downtown Fredericksburg was greeted with whoops and cheers by the crowd assembling for the start of a Back the Blue rally Sunday afternoon.

“Mad Mike” Wade, a biker who lives in Stafford County, told the hundreds who gathered in the park to show their support for law enforcement that it was their honor to keep the rallygoers safe as they marched through downtown streets on their way to the Fredericksburg Police headquarters on Cowan Boulevard.

He said that he and the other bikers would line both sides of the march, and warned that there were people who might want to infiltrate the group and cause them harm. If that were to occur, he said, the response would be “swift and harsh.”

“The silent majority is tired of being silent,” Wade said.

The rally organized on the weekend of National Law Enforcement Appreciation Day proved peaceful. Amy Sudbeck of Fredericksburg said that she organized it because the police have been going through a rough time since protests began locally and across the nation in the wake of the Memorial Day death of George Floyd under the knee of a white police officer in Minneapolis.

“They need to know that they have our support,” she said. “I’m a mother and I have children. We live in a civilized society, and we need to keep it that way.”

Sunday’s rally followed a similar event in Spotsylvania County Saturday and drew a much larger crowd.

The city rally began with Wade, a Navy veteran, saying a prayer thanking God for America, where people have the freedom and liberty to assemble and express their views. Sudbeck then thanked everyone for coming, and then Daniel Cortez and Zoe Norton sang the national anthem.

As the words to “The Star-Spangled Banner” ended, people set out on foot or in vehicles for a more than 2-mile trek to police headquarters. Many were wearing Back the Blue T-shirts, and there was a proliferation of flags, including the American flag and the black and blue flag representing the “thin blue line” of police that protect society from chaos.

The procession stretched for several blocks as it wound its way through downtown and up College Avenue toward Cowan Boulevard. A handful of people shouted “Black Lives Matter” and waved signs as the marchers passed by, but the protests that have taken place downtown since May 31 were officially canceled for the weekend, said Ryan Vera Brown, a community organizer with Leaders for Peace in Fredericksburg.

He said that they have been receiving threats from extremists since a segment aired on the Fox News program “Tucker Carlson Tonight” that included a portion of a 911 call made June 13 by a woman driving downtown. She reported that she was trapped in her car by protesters, couldn’t get out of the area and that the protesters were scaring her child. The dispatcher told her that the protests are considered city-sponsored events and suggested the woman contact City Hall.

Carlson paired that with a quote from Fredericksburg Mayor Mary Katherine Greenlaw at last week’s City Council meeting, in which she apologized for the use of tear gas against demonstrators at much larger protests on May 31 and June 1. The protesters have said that violated the police department’s use of force directive, and the city is investigating the incidents.

Greenlaw and Police Chief Brian Layton were standing outside police headquarters when the crowd made its way into the parking lot. Several people began shouting angrily at the mayor that she needed to “stand up for the city” and “back the blue,” but Cortez told them that this wasn’t the time for politics. Greenlaw didn’t talk about her apology, but did say that Fredericksburg has the best police department in Virginia.

Sudbeck told that crowd that she was so proud that they’d made it to the police station peacefully, and asked her father-in-law, Tom Sudbeck, to say a prayer. Cortez then began singing the original beginning to a famous Irving Berlin song, and the crowd began singing along when he reached the familiar words “God Bless America.” Then they began the walk back to their vehicles and home.

Photos: Back the Blue Rally in Fredericksburg

Hundreds of people turned out at Hurkamp Park for the Back the Blue rally in Fredericksburg on June 28, 2020. Demonstrators were escorted by a…