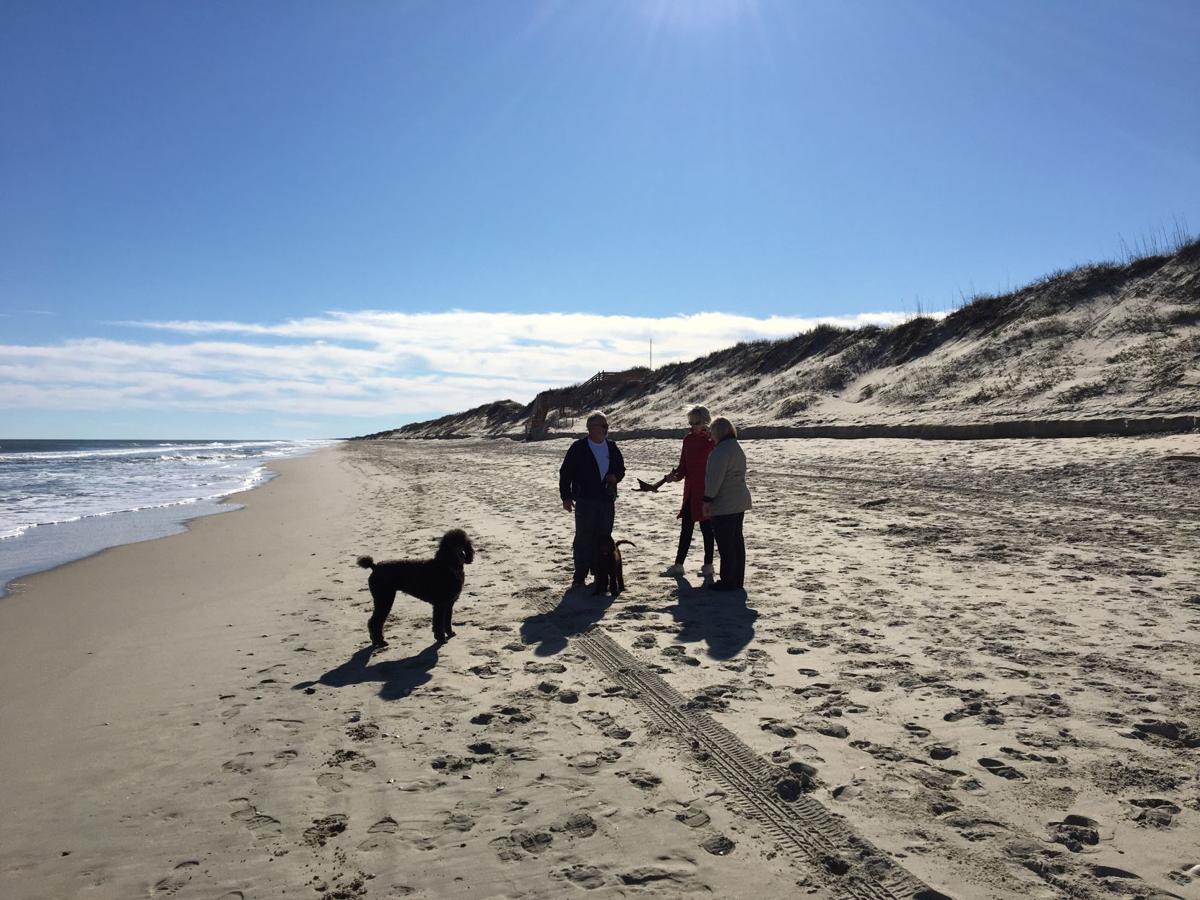 Long walks on empty beaches are a prime allure of winter on the Outer Banks. 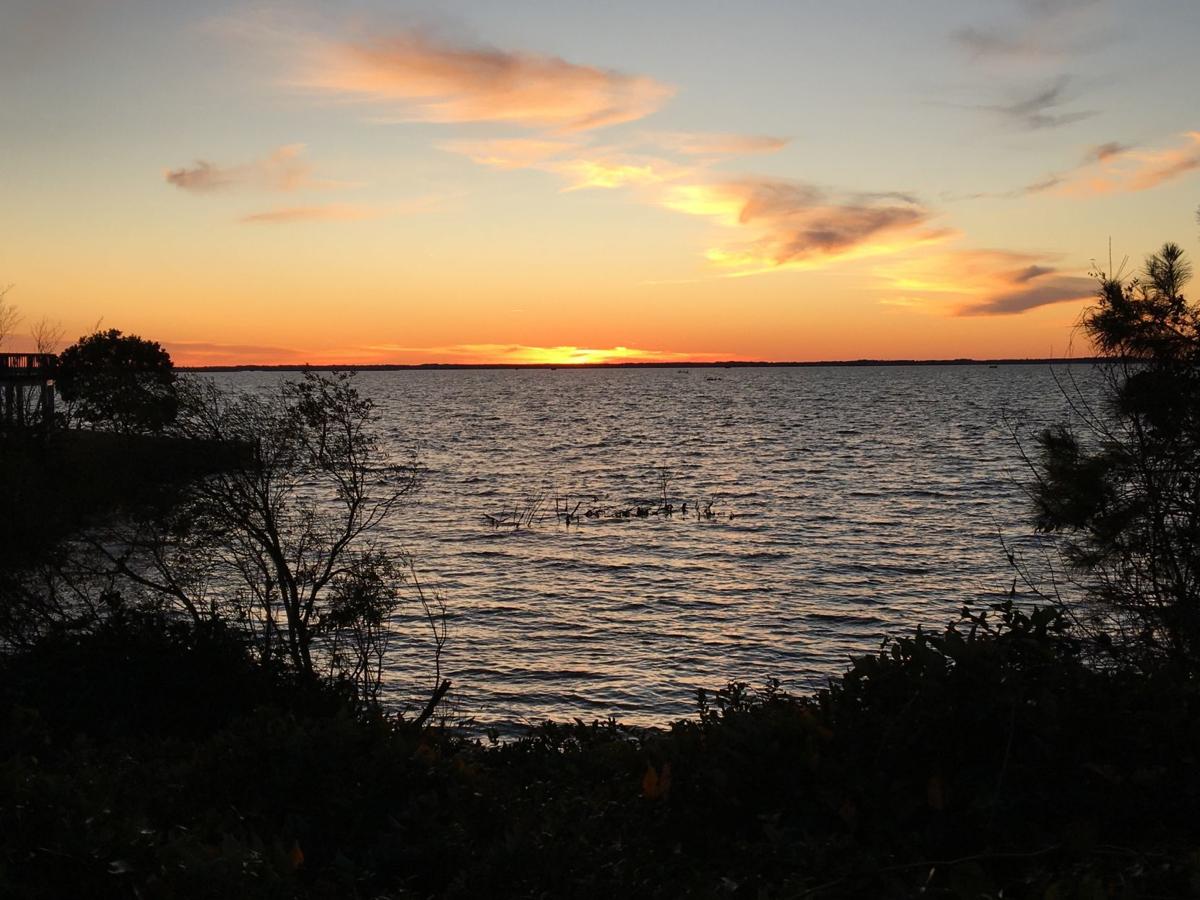 The sun disappears along the horizon of Currituck Sound on New Year’s Eve.

Long walks on empty beaches are a prime allure of winter on the Outer Banks.

The sun disappears along the horizon of Currituck Sound on New Year’s Eve.

Our old gang took a trip back in time for the New Year’s holiday, back to a place we hadn’t seen for a decade or so: North Carolina’s Outer Banks.

Once upon a time, when all 15 of us (minus one late lamented member and plus one newcomer) were a little bit younger, we gathered on Halloween weekend for a number of years in Nags Head and had a great time doing so.

I guess you could say the organizing—yet never really spelled out—reason for our little group is that we are outdoors oriented. Well, most of us, anyway.

This time was different, though. We rented a big place far up the coast from heavily developed Nags Head in heavily—but differently Corolla, where, I found the end of that long coastal road along North Carolina’s barrier islands.

The weather gods smiled on us for the occasion, and we made the most of it. A friend and I revisited favorite old spots such as Nags Head Woods for a hike, and some of the group took a look at new places like the wild horse area just below the state line with Virginia. It is one of three areas along North Carolina’s barrier islands with herds of mustangs, the wild horses some say are descendants of animals left by early Spanish explorers of these coastal lands in Virginia and the Carolinas.

It’s easy to see how so many thousands fall in love with the Banks, despite the fact that the barrier islands face intense development and an uncertain future because of rising sea levels.

Our group socialized in our time at the big house, but without a doubt the thing I enjoyed most was simply getting out to look around at what remains of the natural world.

And while some might find this hard to believe, there are a surprising number of spots dotting the Banks that look largely as they did hundreds of years ago.

On New Year’s Day, for instance, we took a long walk on the beach, taking in the sunshine, the ocean breeze and great lungs full of fresh air. There were a handful of other folks on the beach to the north of us, but to the south, I could not see another soul for miles.

It was just two of us, minus our old four-legged friend Annie, who once enjoyed these long, relaxed walks at least as much as anything humans and dogs ever did together.

Even on the way out, after a final breakfast get-together at Henry’s in Nags Head, four of us took a meandering back roads way north to Virginia, by way of Knotts Island and the Mackay Island National Wildlife Refuge. A free state ferry runs to the island. We took it.

This 9,000-acre property managed by the U.S. Fish and Wildlife Service is one of a dozen refuges in and around the barrier islands and was created to help preserve the greater snow goose population.

We had driven most of the refuge roads, getting out to explore on foot and to look for ducks and other birds. After dropping by refuge headquarters, we were on our way out and happened to stop to take a look out across a vast open expanse of fields and marshlands, scanning with binoculars.

Good thing we did, too. As we looked around, someone said, “Look, out there straight in front of us, far off.”

We looked. And what we saw was the highlight of the entire trip:

At least a mile off, the late afternoon sun cast a golden glow on a slowly expanding cloud that rose off the prairie—bigger and higher—as a flock of snow geese numbering certainly beyond a thousand birds took to the sky.

It was an unforgettable scene. And one sure to be remembered for years.

When you take the road less traveled, the result is often uneventful. You take it for the handful of times it is stunning, exciting and something you will never forget.

Paul Sullivan of Spotsylvania County, a former Free Lance–Star reporter, is a freelance writer. Email him at pbsullivan22@gmail.com.

Paul Sullivan of Spotsylvania County, a former Free Lance–Star reporter, is a freelance writer. Email him at pbsullivan22@gmail.com.