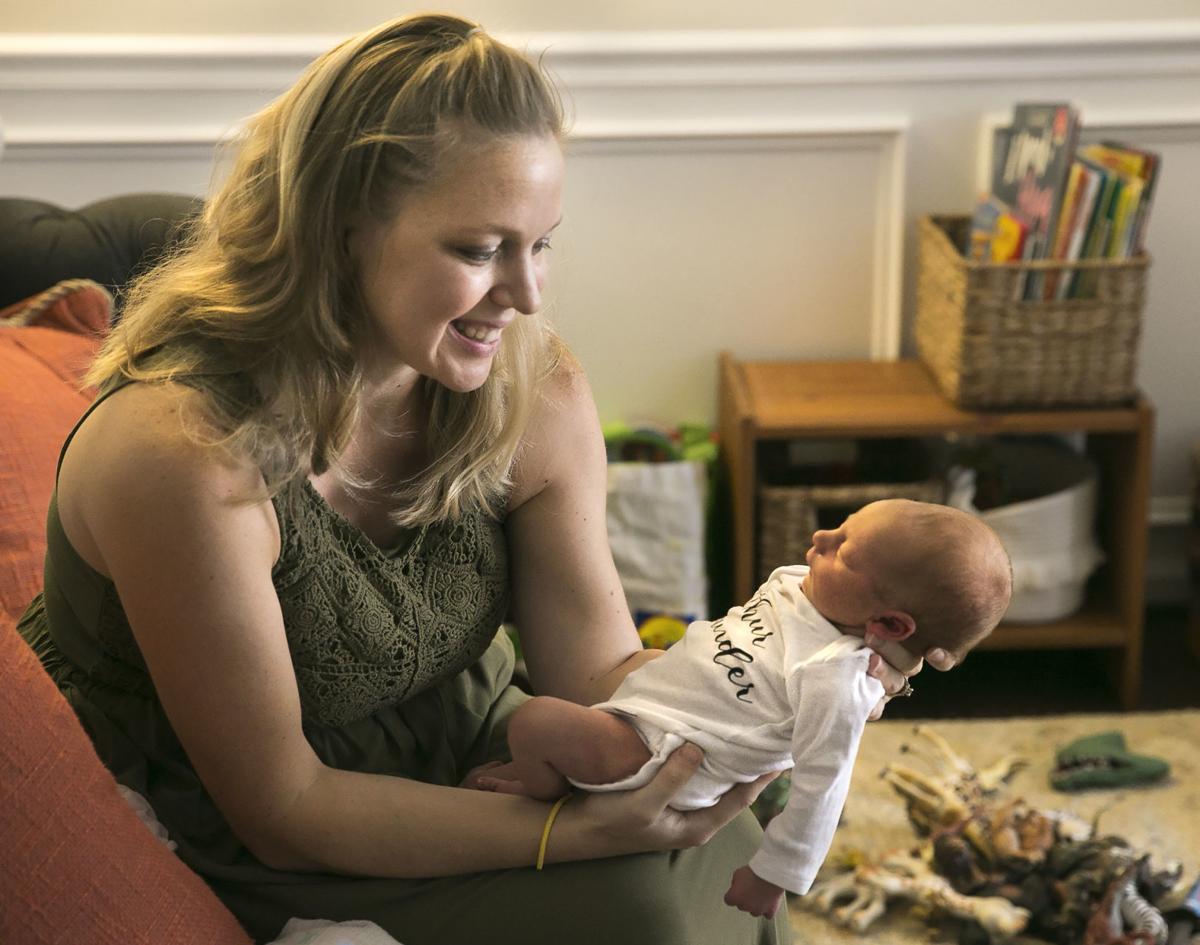 Amy Robinson admires her week-old son, Arthur ‘Artie’ Alexander, at the family’s Spotsylvania town house. Her third child arrived so quickly that she gave birth on the sidewalk near a neighbor’s home. 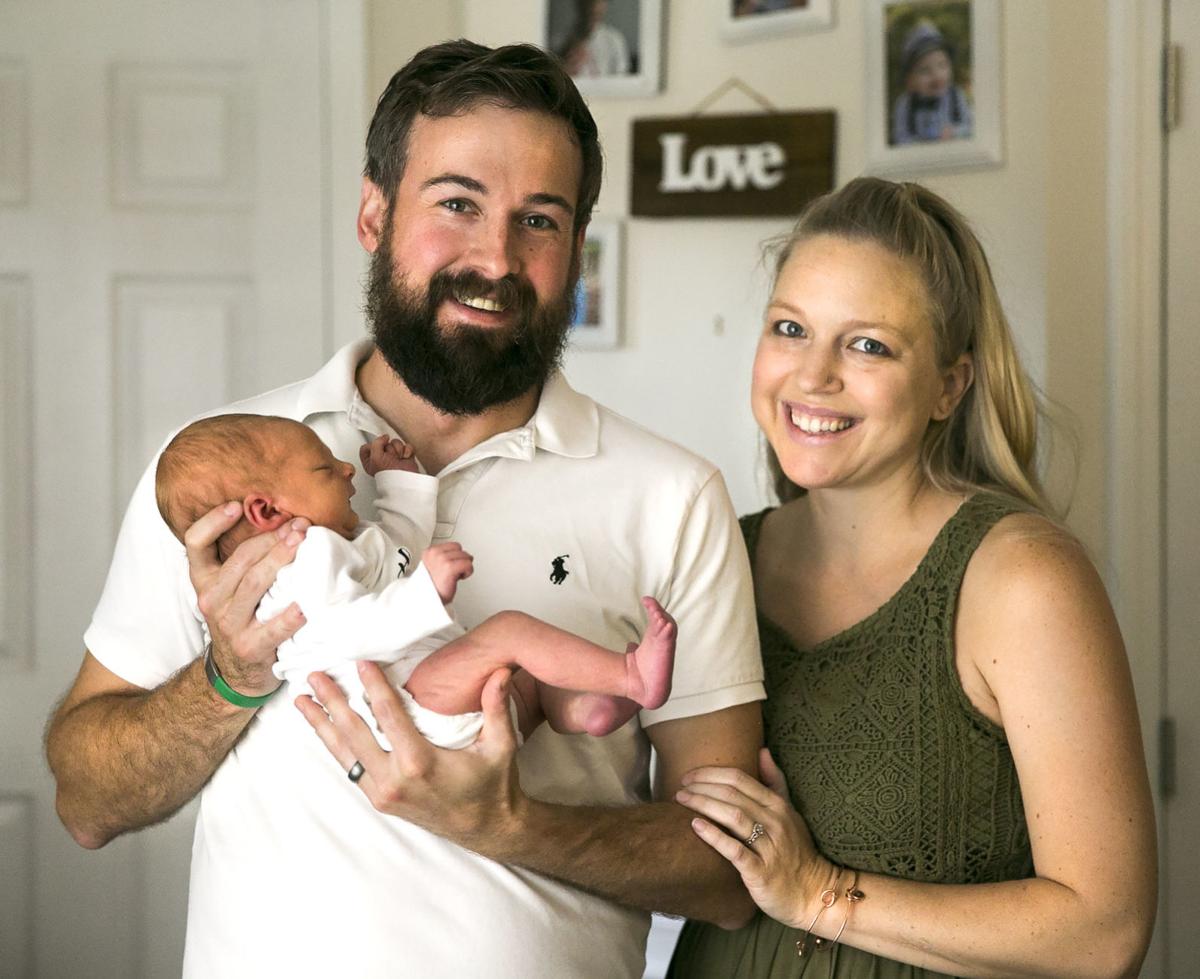 Andrew and Amy Robinson were headed to the hospital just five minutes away, but baby Artie was in too much of a hurry to wait. a when she delivered helped his wife deliver their son, Artie, was taking his wife Amy to the hospital when Robinson went into sudden labor in front of the Spotsylvania County townhouse where she lives with her husband Andrew and their two children Henry, 3, and Eleanor, 1. Within minutes Robinson gave birth to Arty while still standing. Andrew was there to make the catch.

Amy Robinson admires her week-old son, Arthur ‘Artie’ Alexander, at the family’s Spotsylvania town house. Her third child arrived so quickly that she gave birth on the sidewalk near a neighbor’s home.

Andrew and Amy Robinson were headed to the hospital just five minutes away, but baby Artie was in too much of a hurry to wait. a when she delivered helped his wife deliver their son, Artie, was taking his wife Amy to the hospital when Robinson went into sudden labor in front of the Spotsylvania County townhouse where she lives with her husband Andrew and their two children Henry, 3, and Eleanor, 1. Within minutes Robinson gave birth to Arty while still standing. Andrew was there to make the catch.

As labor pains surged through her body, Amy Robinson stood on the sidewalk in front of her neighbor’s townhouse with one thought on her mind.

“This can’t be happening,” she recalled. “I’m having this kid outside.”

She and her husband, Andrew, were getting ready to head to Spotsylvania Regional Medical Center, about 5 minutes from their Lee’s Hill home. Amy Robinson had just asked her neighbor, Melanie Hackworth, if she’d watch the couple’s two older children until their grandparents arrived.

Then, as the pregnant mom walked down the steps from the neighbor’s front door, her baby made it clear he wasn’t waiting any longer.

She screamed and put her hands against her lower back, unable to take another step. Her neighbor ran to her side, asking if she was having another contraction.

“I looked up at her with the fear of God in my eyes and said, ‘He is coming,’” Amy Robinson recalled.

At that point, Robinson was still in shock at the thought of it all. She’d have to pull down her pants in the front yard, for Pete’s sake. She barely got off her gym shorts when she saw the baby’s head.

Hackworth went inside to get towels, as instructed by the 911 dispatcher who was still on the line with Andrew Robinson.

“Almost as soon as I came out, she had the baby, standing up, right there in the middle of the sidewalk,” Hackworth said. “It was amazing.”

Andrew Robinson scooped up his son in one of the towels, and Hackworth rubbed her finger on the baby’s tummy to get him to cry.

Arthur Alexander Robinson made his rather hurried entrance into the world at 5:11 p.m. Sept. 6. He was 19.5 inches long and weighed 6 pounds, 14 ounces.

The family is calling him “Artie,” although “Speedy” might be more appropriate.

Spotsylvania County first responders got mother and baby to the hospital, where both were declared fine. The two were home by Sunday, and Artie already has been deemed “the chillest baby we’ve had,” his mother said.

His older siblings are Henry, 3, and Eleanor, 20 months. Henry’s got the protective gene down pat and insists his newest sibling will be called “Baby Brother.” Eleanor, who’s got beautiful blond ringlets, just wants to touch his outstretched hands and toes.

The Robinsons incorporated photos of Artie’s birth with a video recorded by the neighbor’s doorbell. The fish-eye lens on the doorbell camera makes the movement seem farther away than it was, but the moments of anguish are obvious.

Based on the video, it looks like Artie was born about 5:18 p.m. The Robinsons hadn’t seen the footage when they listed 5:11 p.m. on his birth certificate, so they’re sticking with that time.

As the couple reflected on what it was like to give birth on the sidewalk, they’ve found themselves laughing more than fretting.

“We can’t believe this happened, that we did this,” said Amy Robinson, who looked slim and well-rested—adjectives not usually associated with new moms. “It’s just hysterical.”

Andrew Robinson doesn’t remember much about the frantic few minutes in which he listened to the dispatcher, braced his wife as she stood beside him and thought about little Henry, seemingly attached at his hip.

“I remember trying to keep him out of the mess,” said the dad, a civilian who works in program management for the Navy.

A noticeable splat of blood and other birth byproducts was on the sidewalk in front of Hackworth’s home. Spotsylvania firefighters later hosed down the area.

Hackworth’s teenage daughter, Jennifer, kept Eleanor inside with her (and thought her neighbor was dying, based on the noises she was making) but couldn’t convince Henry to leave his father’s side.

The Robinsons said the funniest part came when a food delivery person arrived and eyeballed the scene. He was worried that someone had died.

“It’s no big deal, my neighbor just had a baby,” Hackworth said in such a casual tone, she made it sound like people give birth on the sidewalk all the time.

Amy Robinson, a former first-grade teacher turned stay-at-home mom, had anything but quick deliveries with the first two babies, who were born at the Spotsylvania hospital. Active labor, when contractions are stronger, longer and more painful, typically lasts four to eight hours or more, according to the Mayo Clinic.

She never reached the point with Artie that intense pains came every 5 minutes, the rule of thumb for when it’s time to head to the hospital. Robinson’s contractions were still 8 to 10 minutes apart—and starting to really hurt—at 4:59 p.m. when she called a friend, a nurse in labor and delivery.

The friend told her the third one would be quicker and added: “Honey, it’s time to go.”

Robinson had experienced initial phases of labor all day, and she worked to catch up on laundry and get the town house cleaned. “I did not want to come home to a dirty house,” she said.

TV and movies often show childbirth through a quick and not-so-dirty lens, but not that many babies are born in the back seats of taxis. And they certainly don’t look ready for the camera the moment they take their first breath.

Almost 4 million babies are born each year in the United States, and 98.5 percent of them arrive in hospitals, according to the Centers for Disease Control’s 2014 numbers.

That leaves about 59,000 babies born elsewhere, and about 95 percent of them are delivered at home or birthing centers, according to the CDC. That leaves only 5 percent—or less than 3,000 babies—who make their arrivals in other places, such as vehicles, elevators or the sidewalk in front of a neighbor’s townhouse.