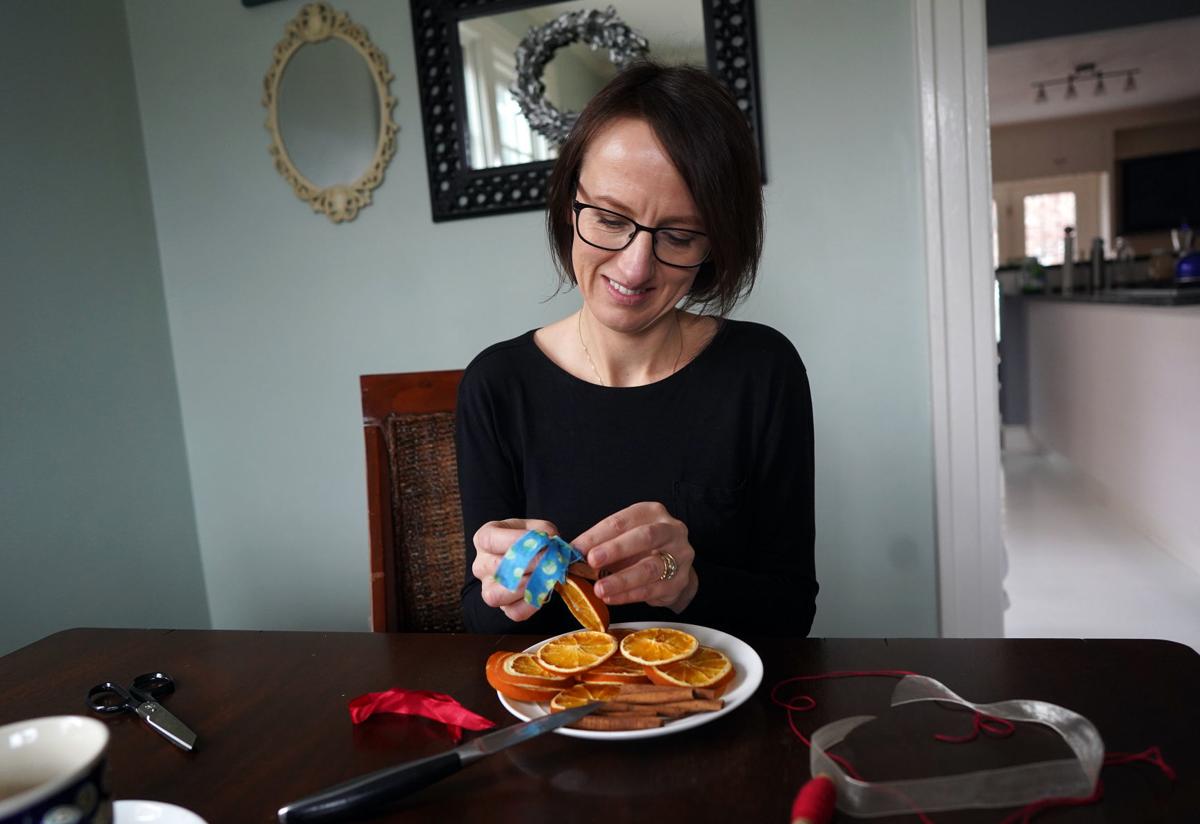 To reduce the amount of waste she generates, Gosia Swearingen makes her own Christmas ornaments with dried oranges and cinnamon. She also makes centerpieces with clippings from her tree and yard. 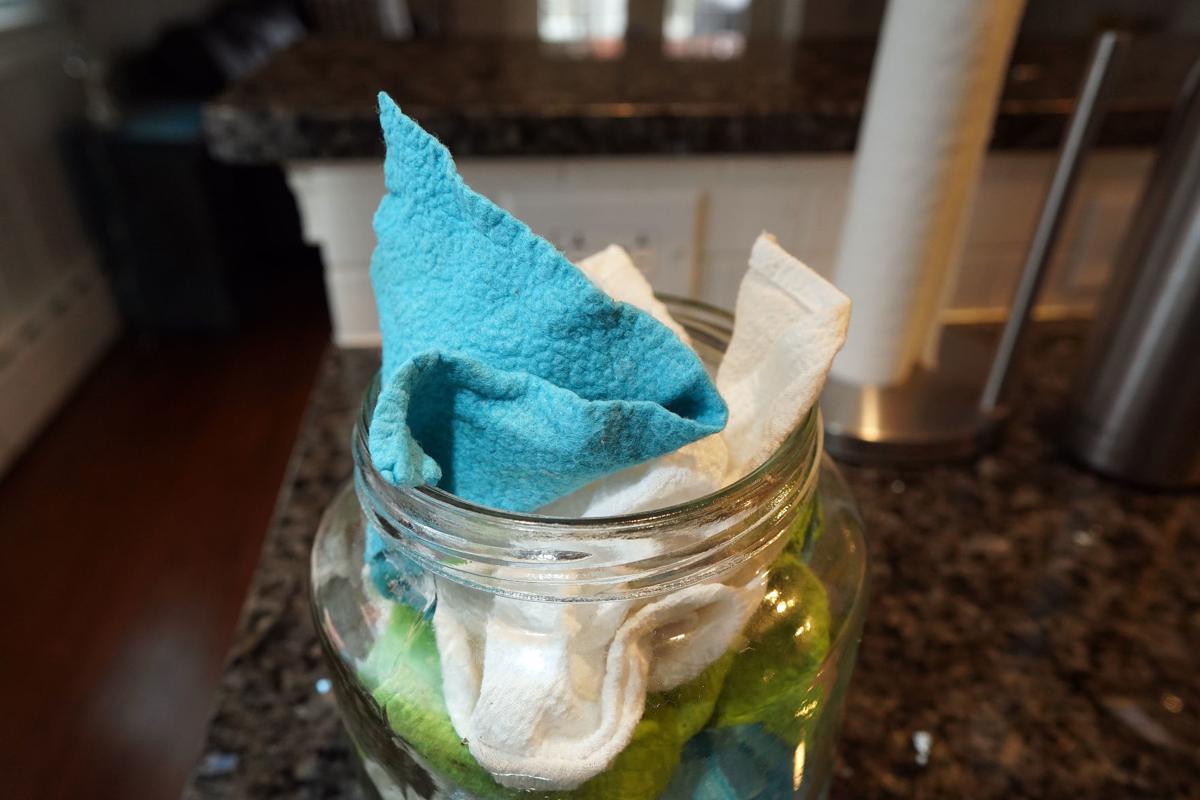 Gosia Swearingen keeps jars of reusable microfiber cloths, upstairs and down, for cleaning. She only uses paper towels for occasional cooking. 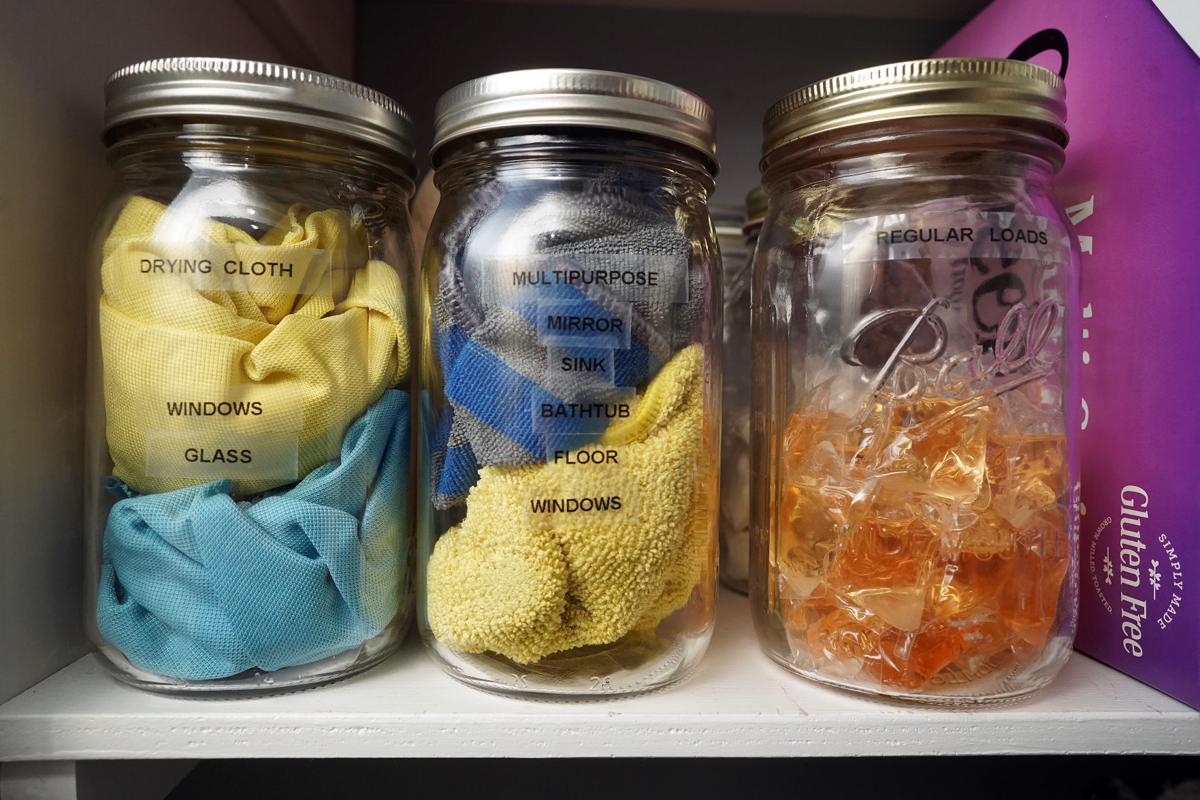 Someone gave Swearingen Mason jars, which she uses, over and over again, to hold reusable cleaning supplies or laundry detergent. 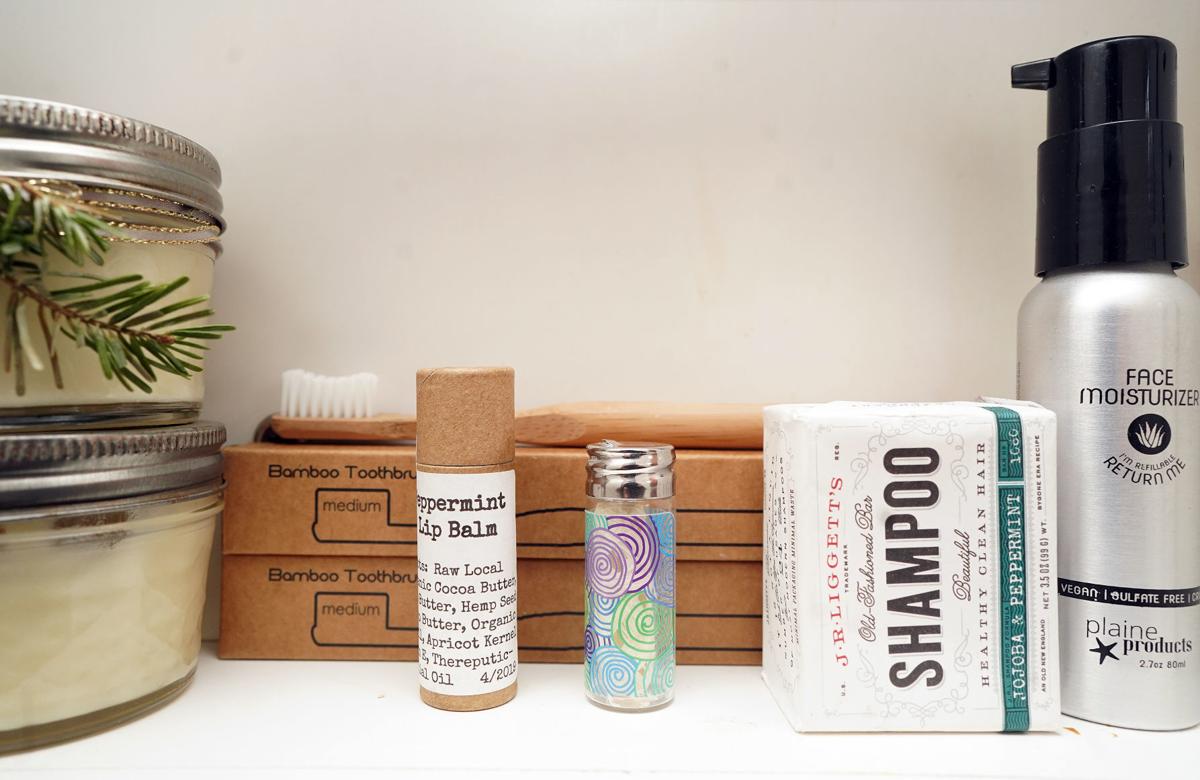 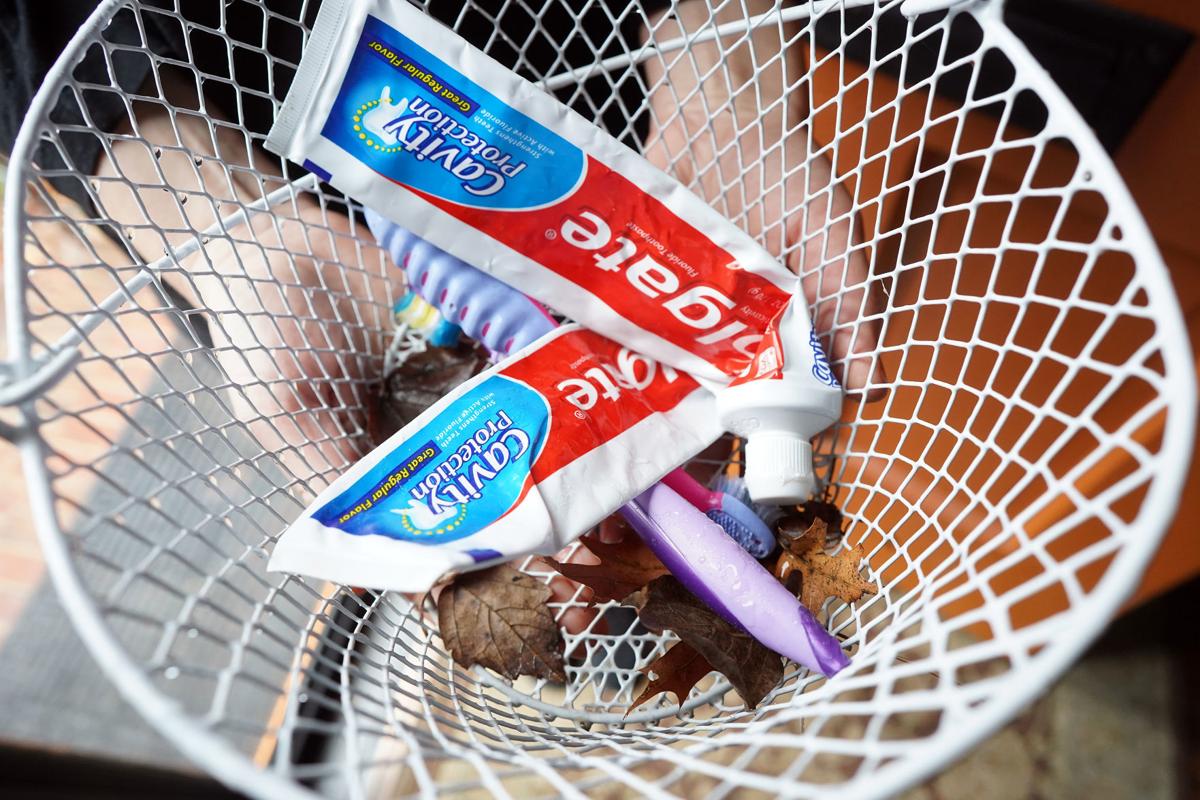 Gosia Swearingen has collection baskets around the city for used dental products, which are recycled and generate small amounts of money for school programs.

To reduce the amount of waste she generates, Gosia Swearingen makes her own Christmas ornaments with dried oranges and cinnamon. She also makes centerpieces with clippings from her tree and yard.

Gosia Swearingen keeps jars of reusable microfiber cloths, upstairs and down, for cleaning. She only uses paper towels for occasional cooking.

Someone gave Swearingen Mason jars, which she uses, over and over again, to hold reusable cleaning supplies or laundry detergent.

Gosia Swearingen has collection baskets around the city for used dental products, which are recycled and generate small amounts of money for school programs.

There’s a lot of talk this time of year about ways people can stay healthy during the holidays in the midst of all the rushing and wrapping, shopping and eating.

Two Fredericksburg women would like to include options for the planet in that conversation.

Joni Wilson, a former director at the University of Mary Washington, and Gosia (pronounced Go-sha) Swearingen, a native of Poland who’s surprised by how much Americans throw away, recently shared their dreams about a “green holiday” with the Fredericksburg Food Co-op.

“A green Christmas is not about one person doing it perfectly,” Swearingen said. “It is about millions of people doing it imperfectly.”

Both want others to know that every little bit helps. Swearingen, who admits she’s a little “high strung” about the plethora of plastics in society, emphasized that small changes can have a big impact on Earth. She says there’s still plenty of room for improvement at her fixer-upper home downtown, which she shares with her husband, Jared, and their two sons.

“I think of limiting our trash as a challenge,” she said. “When I find a new solution to a problem, it is like I won a gold medal in the anti-trash Olympics.”

If the waste that’s generated during the holidays were an Olympic event, it would have to be a marathon.

Wilson gave a PowerPoint presentation with statistics that still blow her mind. According to Stanford University, Americans throw away 25 percent more trash between Thanksgiving and Christmas than any other time of the year.

If each family in the United States wrapped three gifts in something reusable—brown paper bags, cloth pouches or even colorful scarves—the action would save enough paper to cover 45 football fields, according to Stanford. Likewise, if everyone reused 2 feet of wrapping ribbon, the 38,000 miles of saved ribbon could stretch around the planet.

“When you see things like that, it’s flabbergasting,” Wilson said.

She suggests using old maps or newspaper comics, posters no longer put on walls or colorful pages from old magazines to wrap gifts. She also uses brown bags, decorated with stamped-on holiday shapes, but recipients scoffed that they weren’t very festive. So, she started turning the shiny paper on the inside of potato chip bags or dog treats—after she washed it, of course—into ribbons or other decorative flourishes.

Swearingen likes to put gifts in pouches of all sizes with drawstrings.

She’s also a fan of toilet paper made from 100-percent recycled paper, and a brand called Who Gives a Crap covers each roll, this time of year, in holiday designs. Swearingen saves the wrappings for gift paper, but her reusing quest doesn’t end there.

When she doesn’t air dry her clothes on racks in the kitchen, she uses a dryer, but she saves the lint from each load. She stuffs it into the empty toilet paper rolls for use as fire starters when her family goes camping.

“It works great,” she said. “You can come up with lots of little ideas to save money.”

Her husband, an engineer at Dahlgren, started warming up to Swearingen’s suggestions to cut waste when he saw the money they were saving. That was more than 10 years ago, when their first son was born, and she opted for cloth diapers over disposable ones.

She doesn’t force the men in her family to go down the reduce-reuse-recycle path, but gives them options—such as cloth hankies versus throw-away tissues—and said the boys quickly adapt to the waste-saving measures.

Wilson isn’t suggesting anyone put measures in place that detract from their holiday traditions. But if everyone made one change, she believes their ounce of practicality could keep pounds of unwanted items from the landfill.

“We’re going to run out of space,” Wilson said. “We just have to think of a better way to manage our impact.”

She suggests that people ask others for a list of desired items. It may eliminate the element of surprise, Wilson said, “but getting somebody what they want is better than giving something that’s going to go in the trash.”

She also suggested giving to charities in the name of families and friends. Would-be donors can avoid scams by checking out the groups and their financial operations on Charity Watch or Charity Navigator.

While the women talk a lot about reducing the amount of garbage sent to the landfill, “sometimes that’s the best that can happen because then, it’s not floating in an ocean or a river or blowing around somewhere,” Wilson said.

Swearingen takes all aspects of reducing waste seriously, picturing future generations who have to deal with the aftermath of an unhealthy planet.

“I don’t want to be the person who throws away the toothbrush that’s gonna be swallowed by a whale,” she said. “I want to be able to go on a hike and not pick up trash [left behind], which I do.”

As for those toothbrushes, she has collection baskets throughout the city for old brushes and empty toothpaste tubes and floss containers. She praises her Mortimer Avenue neighbors for their willingness to help as well as the general progressiveness of Fredericksburg, and she’s encouraged that people are changing how they do things.

Swearingen ships the empty dental containers to a company for recycling. Each shipment earns points, which translate into donations for schools, like the BoxTops for Education program.

“It’s not hundreds of dollars,” Swearingen said. “We’re not even close to $10 yet, but it makes me feel better.”