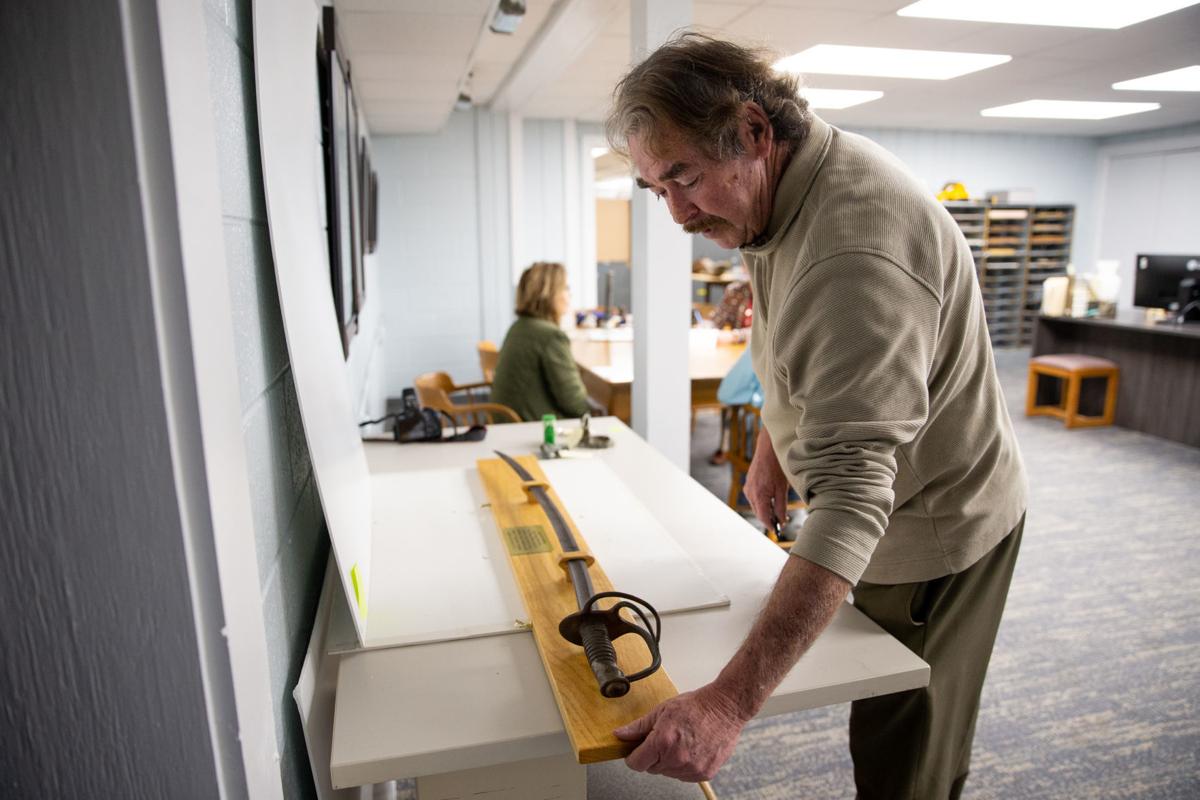 J. Terry Dougherty, curator of the Spotsylvania County Museum, examines a U.S. Cavalry saber that was discovered under the floorboards of Zion United Methodist Church in 1957. 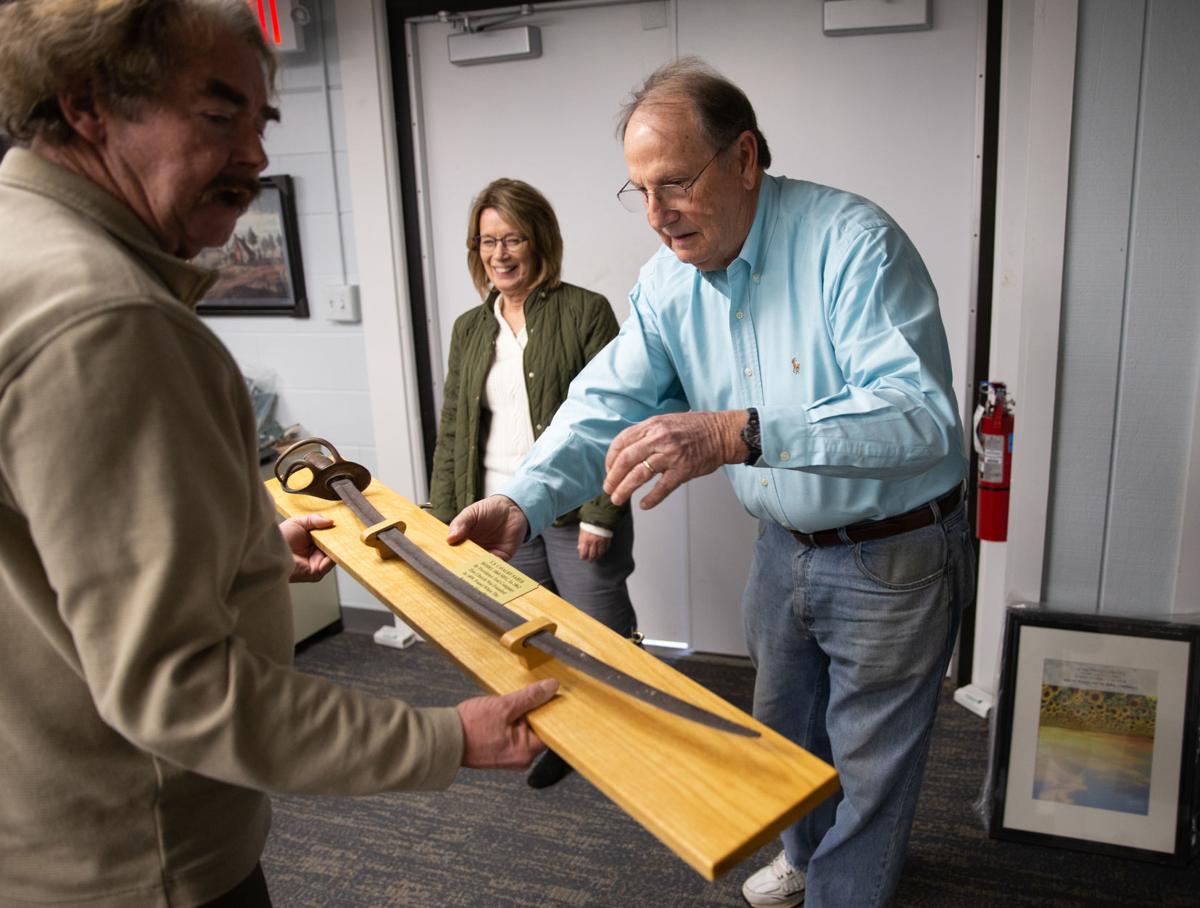 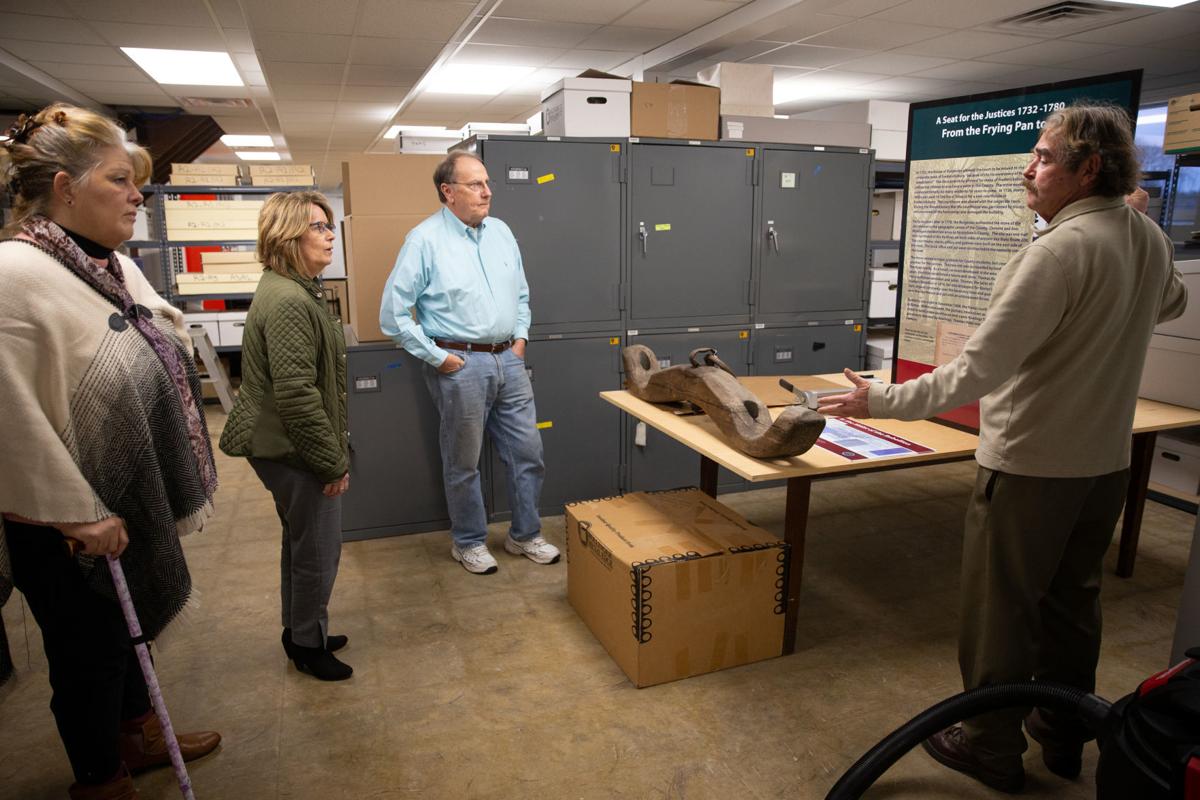 Spotsylvania County Museum curator J. Terry Dougherty presents a tour of the museum’s collection at its new site at the First Day of Chancellorsville park. 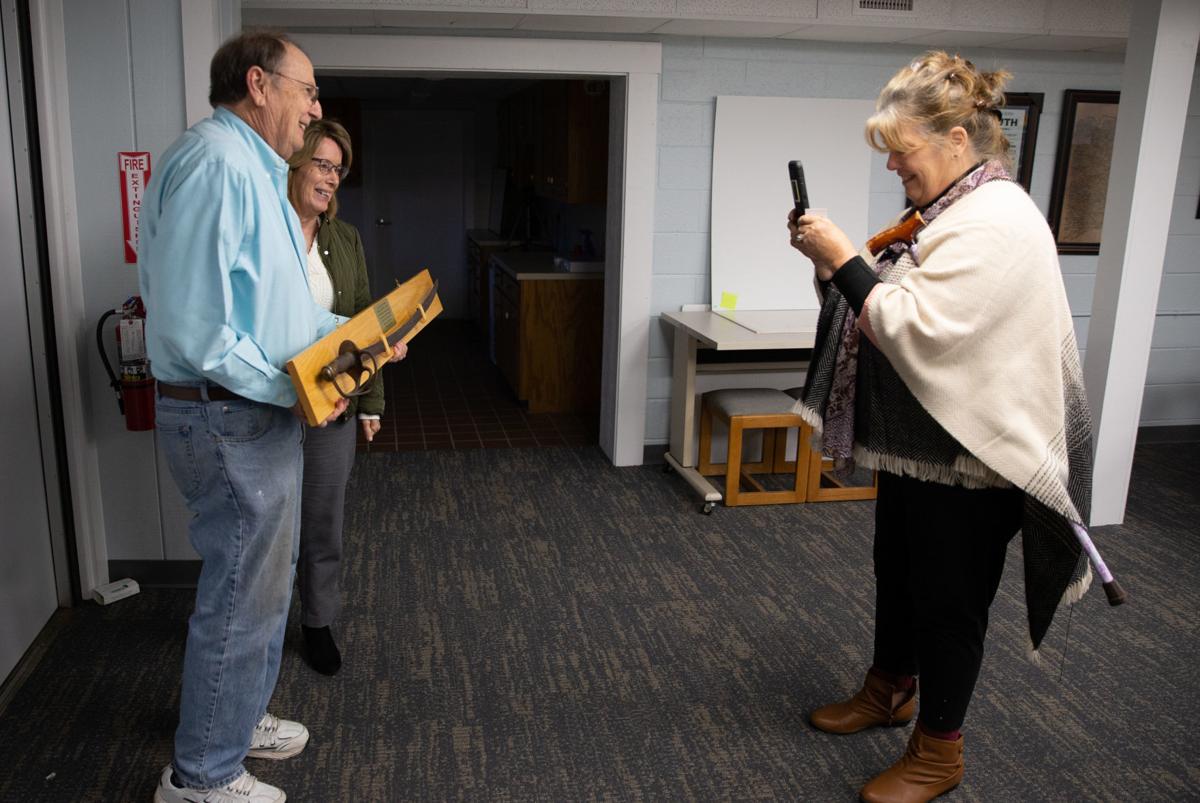 J. Terry Dougherty, curator of the Spotsylvania County Museum, examines a U.S. Cavalry saber that was discovered under the floorboards of Zion United Methodist Church in 1957.

Spotsylvania County Museum curator J. Terry Dougherty presents a tour of the museum’s collection at its new site at the First Day of Chancellorsville park.

The sword soon to be displayed at the Spotsylvania County Museum was pulled, not out of stone like Excalibur, but from under the floorboards of a historic church at Spotsylvania Courthouse.

And, after spending parts of three centuries in some unusual places, the U.S. Cavalry saber manufactured during the Civil War is about to see daylight again, as soon as the museum opens in a new location—the red building on the First Day of Chancellorsville park on State Route 3.

“We’re ecstatic,” said Museum Curator J. Terry Dougherty. “Any time we get a piece of property that has a local story, it helps us do a much better job of explaining what effect the war had on Spotsylvania.”

The museum may not be able to explain how the sword, forged in 1862 at the Providence Tool Co. in Rhode Island, ended up in the crawl space of Zion United Methodist Church in Spotsylvania. But church historian Dennis Gallahan has a theory, and it’s connected to Charles R. Chewning, who fought with Company E of the 9th Virginia Cavalry. Chewning was a lifelong bachelor who kept a dairy of his experiences during the Civil War, and he wrote about a near-fatal injury during the 1862 Battle of Second Manassas.

He had emptied his pistol “into the fleeting mass of men ahead” when a federal officer rushed at him with his sword.

“He struck me hard on my left leg, cutting all the way to the bone and knocking me to the ground,” Chewning wrote. “I pulled out Pa’s old horse pistol and shot him dead before he could strike me again.”

Chewning was having trouble walking, so he picked up the officer’s sword “which was still wet with my blood” and hobbled until he found help.

Gallahan believes the sword Chewning used as a crutch is the same one found in the church and recently loaned to the Spotsylvania Museum.

The historian suggests the sword that almost killed Chewning—and caused an injury that plagued him the rest of his life—became a treasured keepsake. When Chewning was buried in the Zion cemetery in 1912, Gallahan believes a friend, maybe a fellow soldier, attended the service and stashed the sword in the crawl space “as a fitting remembrance of his sacrifice during the Civil War,” according to a paper about the sword written by Gallahan and Patrick Sullivan.

However it got there, the sword remained hidden until 1957, when Zion members found it as they replaced the building’s original wide-plank floor.

“It was in surprisingly good condition,” according to the sword history.

A photo in The Free Lance–Star announced the discovery, and a caption described the sword as “rusty but still sturdy.” Members gave it to the Rev. Cephas Haynes, a popular pastor who’d earned a Purple Heart during World War II.

When he died in 1976, his widow returned the sword to the church as a gift.

For the better part of the next four decades, the sword sat atop storage cabinets in the pastor’s office.

“We brought it out on special occasions, such as Founder’s Day or Civil War day,” Gallahan said.

In 2015, church member Bob Scott mounted the sword on a handcrafted display, but there still wasn’t an appropriate place to display it. The blade went back to its former resting place—not under the floor, but on top of the cabinets.

Barry Blakley, the current pastor, said that wasn’t proper for such a memento, and historian Gallahan and head trustee Linda Struebing looked for a suitable resting place.

They wanted the artifact to be safe and secure in a location where it could be seen by lots of people and among other articles of that period.

The agreement with the Spotsylvania museum checked off all those boxes, Gallahan said. The church still owns the sword, but is loaning it to the museum for display.

“I like the idea that more people will see it. Period,” Gallahan said. “I also like even more the idea that it’s on a Civil War battlefield. It’s back where it belongs.”

Struebing appreciated the fact the museum will acknowledge the role Zion played.

“We’ve got a lot of history there,” she said about the church, which was founded in 1859 and served as headquarters for Confederate Gen. A.P. Hill, a field hospital and an observation point during the Civil War.

Dougherty said the sword will be displayed with an exhibit on the Battle of Spotsylvania. It’s one of two 19th-century swords in the museum’s collection.

He’s curious to know what other treasures may be hidden in the area’s historic buildings.

“Now everyone in Spotsylvania will be digging up their floorboards to see what’s underneath,” Dougherty said, laughing. “You never know what you’re gonna find.”

In the next few weeks, the Spotsylvania County Museum will open at its new location, in the former Lick Run Community Center that's now part of the First Day of Chancellorsville park on State Route 3.

The red building that will house the museum has about 1,800 square feet, which will hold about 3 percent of the museum's 6,000 artifacts, said Curator J. Terry Dougherty.

The museum first opened in the old Berea Christian Church at Spotsylvania Courthouse, then later moved to the Merchant Square Building, which also houses county offices. When the county needed more space, officials decided to move the museum to the cluster of farm buildings and the former community center on Route 3, known as McGee's Hill. That's where the initial engagement of the Battle of Chancellorsville began.

Dougherty has photographed and cataloged the county artifacts, which range from Native American arrowheads to the Civil War-era sword loaned from Zion United Methodist Church in Spotsylvania.

The museum continues to search for artifacts as well as photographs of the county through the 1970s. Anyone interested in sharing pieces with the museum or having photos scanned can contact Dougherty at 540/507-7278.