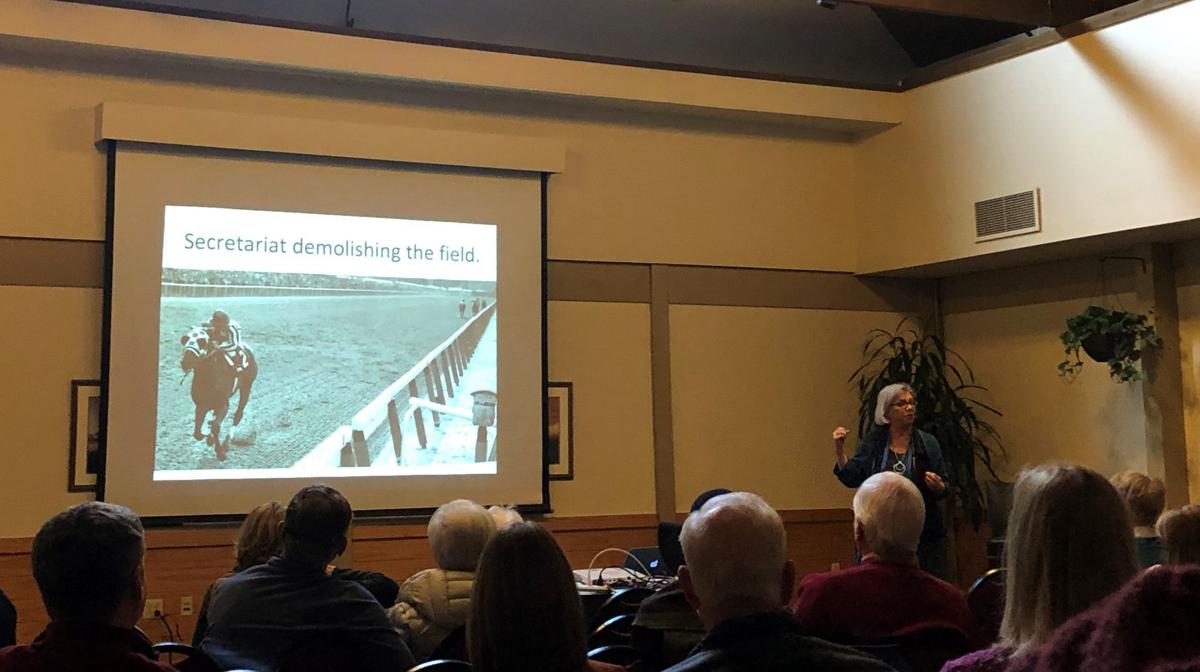 K.C. Tweedy co-authored a book, “Secretariat’s Meadow,” about her family’s story and Secretariat as a way to preserve the history. Tweedy’s mom, Penny Chenery Tweedy, owned the horse.

K.C. Tweedy co-authored a book, “Secretariat’s Meadow,” about her family’s story and Secretariat as a way to preserve the history. Tweedy’s mom, Penny Chenery Tweedy, owned the horse.

WINTERGREEN—A new speaker series at Wintergreen Resort kicked off Nov. 24 with a discussion about America’s most famous racehorse—Virginia native Secretariat.

Kate Chenery Tweedy, whose mother owned Secretariat, talked with a small crowd about her family, their famous horse and the Disney movie about the 1973 Triple Crown win.

“His sheer joy in running inspired us all,” she said of the big chestnut thoroughbred.

Rod Kessler, the general manager of Wintergreen, said the speaker series has been in the works for a long time and is part of an effort to provide more cultural activities for the community.

“We want to be more relevant across generations,” he said.

Kessler pointed to a summer performance of “The Sound of Music” as another example in this effort.

Tweedy co-authored a book, “Secretariat’s Meadow,” about her family’s story and Secretariat as a way to preserve the history. Tweedy’s mom, Penny Chenery Tweedy, owned the horse.

“The book is the genesis of this conversation and our efforts to keep his story alive throughout the country,” she said.

Those efforts include starting a nonprofit earlier this year to restore the barns at Secretariat’s birthplace in Caroline County and to establish a museum. The Meadow Event Park in Doswell, her family’s old farm, will celebrate the horse’s 50th birthday in March.

The nonprofit Secretariat Heritage Center is seeking to raise $2.5 million for the barn restoration and other projects with a goal of completing the work in 2023, in time to celebrate the 50th anniversary of the Triple Crown win.

Secretariat was the first horse in 25 years to win all three races. Two of his descendants—American Pharaoh and Justify—achieved that feat within the last five years.

Many of those in attendance at the recent event said they watched Secretariat win the Kentucky Derby, Preakness and Belmont Stakes on television. On Sunday, they had the chance to watch those races again. His record-breaking wins still elicited rounds of applause from the audience 46 years later.

Tweedy said she still gets goosebumps watching Secretariat demolish the field at the Belmont Stakes. He won by 31 lengths—a record that stands today, among many others.

“A lot of us were in tears,” she said of Belmont. “We knew we had seen something unbelievable.”

Tweedy and her mother were extras in the 2010 biographical film “Secretariat.” She said not everything in the movie is correct, but added that the director did a good job overall with the famed horse’s story.

“My mom was tougher than Diane Lane,” she said, referring to the actress who played the role of Penny Chenery Tweedy in the movie.

One error in the film was an early scene of Penny Chenery Tweedy cooking pancakes.

“Dad make the pancakes,” she said, because her mom did not cook.

The director also played up tensions between Penny Chenery Tweedy and Pancho Martin, the trainer of Sham, a rival of Secretariat. In reality, Kate Tweedy said her mother respected Sham’s team and that Sham deserves more credit in this tale.

“Sham is an important part of the whole story,” she said. “He pushed Secretariat to run faster.”

Tweedy said she lived a normal life until 1967, when her grandmother died and her mother took over the family business, commuting from Denver to Richmond.

She recounted her family’s story starting with her great-grandparents who lived in Virginia during the Civil War. Her grandfather, Chris Chenery, turned the family farm into a horse racing stable in 1936 following a heart attack.

“Granddad loved horses,” she said. “This was his great passion.”

He wanted to win the Kentucky Derby but came up short four times in the 1950s. Penny Chenery Tweedy realized his dream in 1972 when the family’s horse Riva Ridge won the Derby and the Belmont Stakes.

“That was the pinnacle of everything Mom had hoped for,” Tweedy said. “She proved that a woman could lead a stable to victory … That was everything. It could have stopped right there.”

But their story didn’t stop there, and Riva Ridge’s triumph was overshadowed by Secretariat, who was named Horse of the Year that same year.

Tweedy said the family had a lot of faith in Secretariat, a beautiful horse with perfect conformation.

“[But] the Triple Crown was never our dream,” she said. “We just wanted a Derby win.”