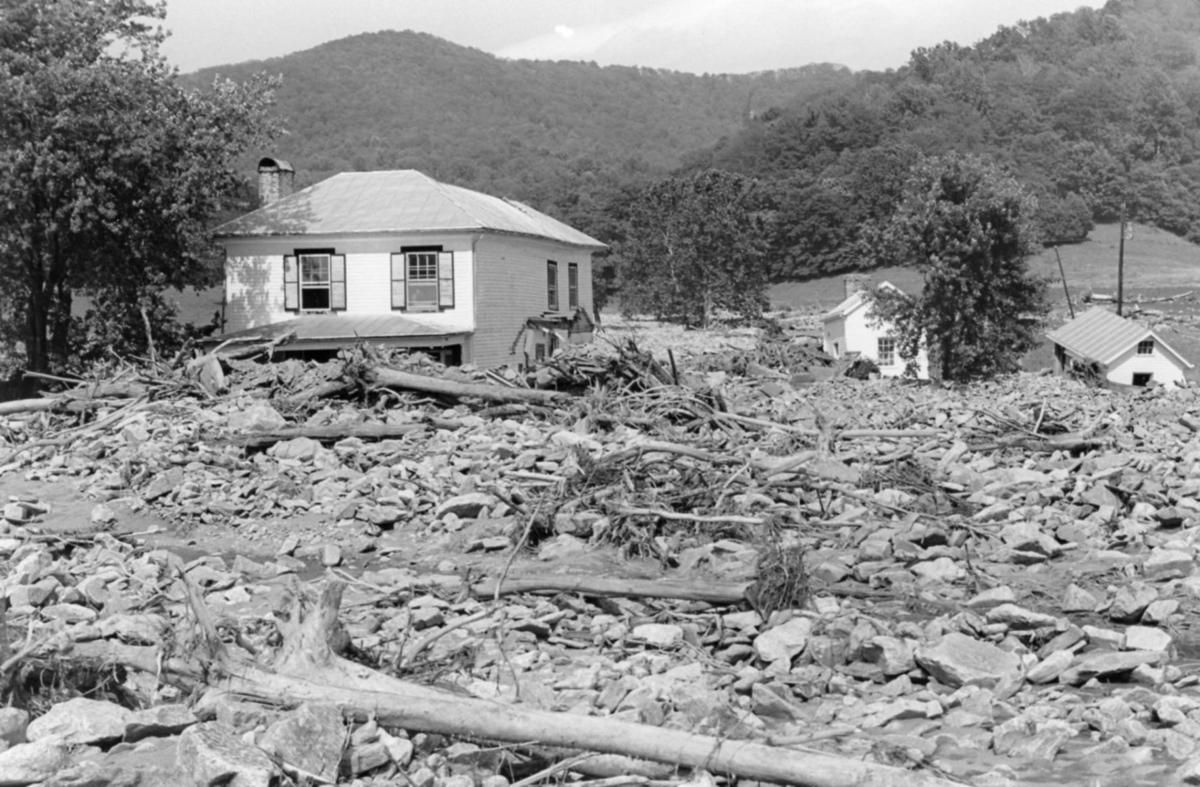 Randall Lillard's home at Graves Mill shifted from its foundation while the family rode out the June 27, 1995, flood upstairs. 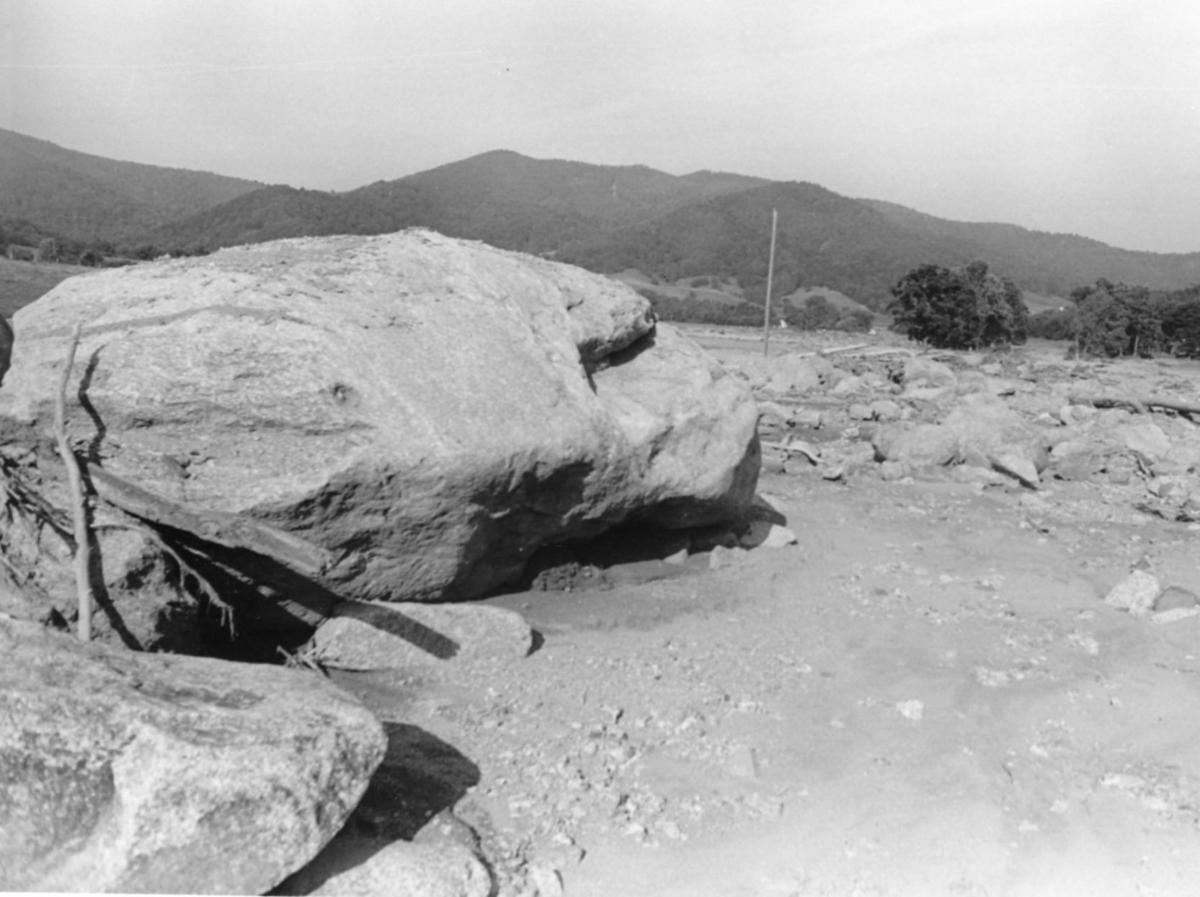 Tractor-sized boulders washed up more than 3 miles from the top of Thoroughfare Mountain. 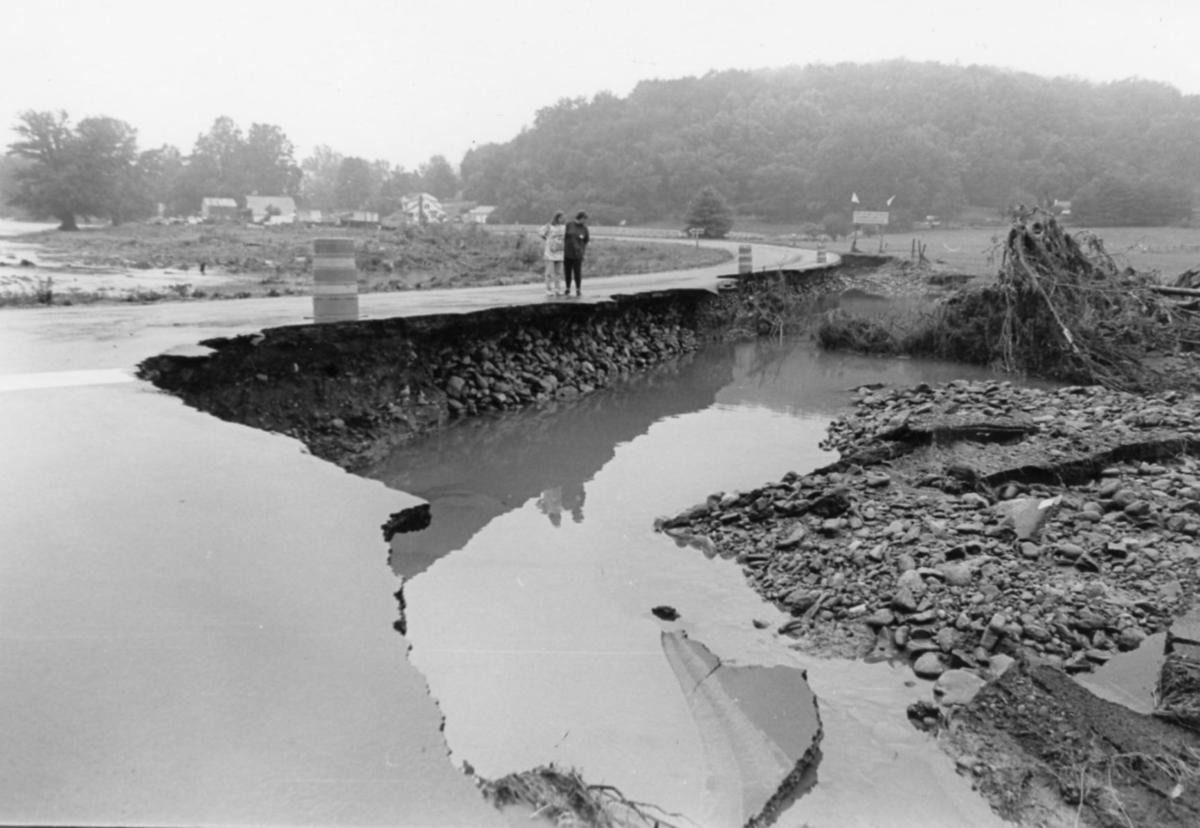 A huge section of State Route 231 at Banco was washed out in the 1995 flood. Three-fourths of the bridges in Madison County were destroyed. 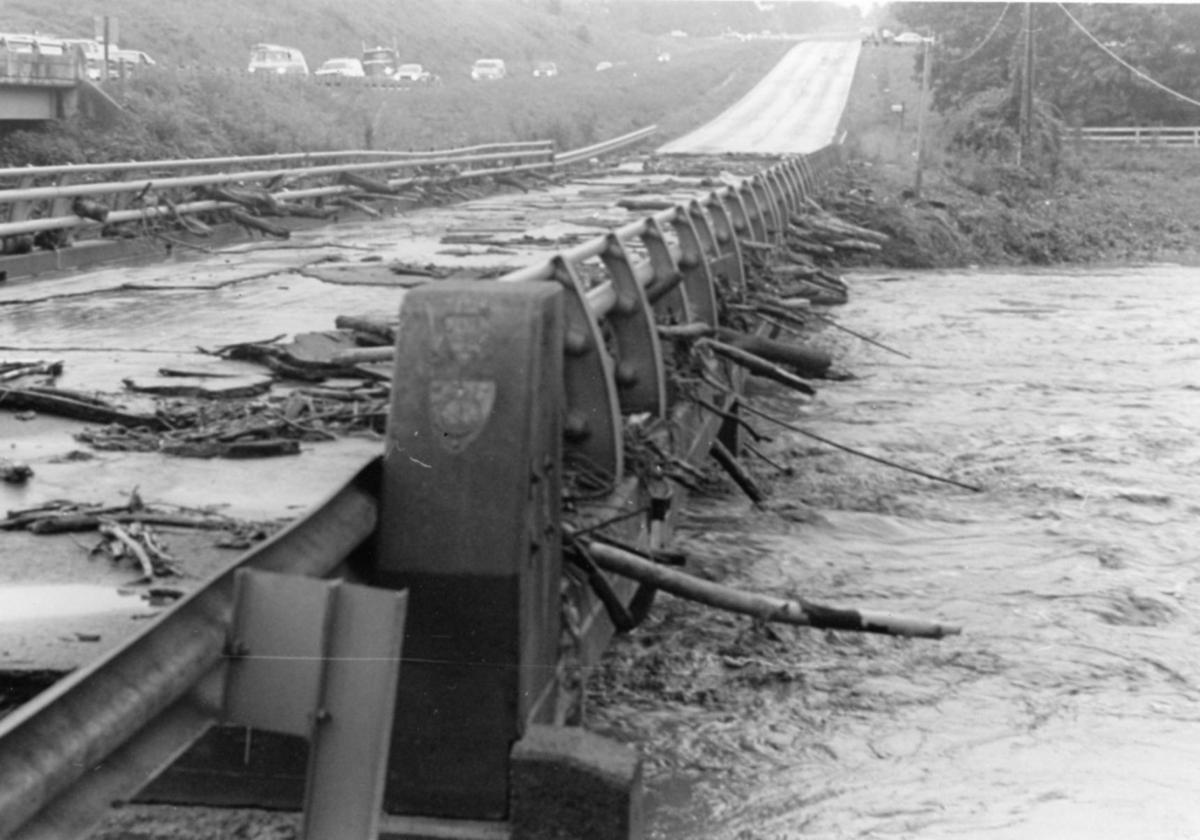 The U.S. 29 bridge was closed to traffic during the storm. Water rose 20 feet above the Robinson River.

Randall Lillard's home at Graves Mill shifted from its foundation while the family rode out the June 27, 1995, flood upstairs.

Tractor-sized boulders washed up more than 3 miles from the top of Thoroughfare Mountain.

A huge section of State Route 231 at Banco was washed out in the 1995 flood. Three-fourths of the bridges in Madison County were destroyed.

The U.S. 29 bridge was closed to traffic during the storm. Water rose 20 feet above the Robinson River.

They called it the 500-year flood.

On June 27, 1995, a low-pressure system centered over the Midwest and a backdoor cold front dropping down from New England come together over Madison County.

The mountains caused the copious amounts of moisture contained in the clouds to lift and turn into rain and the greatest natural disaster in county history was underway.

The rain began around 3 or 4 in the morning and continued until the afternoon. Even 25 years later, how much fell is uncertain but estimates range from 18–30 inches, depending on where you were.

At Banco, along State Route 231, Charlie Strickler reported that his rain gauge (that held 5 and a half inches) was running over at 9 a.m. At 1 p.m., it was running over again and, at 2:30, he said he poured out another 3 inches. He had no idea how much was lost in the overflows.

And this was at the base of the mountains. Higher up, some estimate that twice as much rain may have fallen.

I was publishing a local magazine at the time and when word came of the devastation that was occurring in Madison, I immediately grabbed my camera and my reporter’s notebook and headed for the area.

By this time—late afternoon—the water in the Robinson River on U.S. 29 between Brightwood and Madison was 20 feet high and sending debris onto the elevated bridge. No vehicles were allowed to cross.

Seven or eight miles farther south, traffic had also been halted at the U.S. 29 bridge over the Rapidan River at the Greene County line.

No one knew it at the time, but three-fourths of the bridges in rural Madison County had been wiped out, as had telephone and electric service. Those away at work could not get home and had no idea whether their families were safe. Those at home found themselves isolated from the outside world. (There were no cellphones or internet then.)

The greatest devastation was on the southeastern side of the mountains at Graves Mill. Here, boulders the size of tractors were washed like marbles three or more miles down Thoroughfare Mountain and deposited in fields while trees 2 feet in diameter were washed out and sent roaring down what 24 hours earlier were quiet brooks.

Randall Lillard and his wife were forced to retreat to the second story of their family home when water and rocks came hurdling down a ravine. They watched the landslide completely bury their commercial hog house and its inhabitants.

Then they felt the water lift their ancestral home off its foundation and shift it downward. They could do nothing but hope and pray. Miraculously, they survived.

Doris Frisbie, who lived on a hillside less than a mile away, was not so lucky. When she noticed water trickling into her laundry room, she told her husband, Herbert, who went outside to find a piece of plywood to stop the leak.

Suddenly, a slide threw him to the ground and washed him down the hill to where he was caught in a wire fence. He scrambled to safety and started back up to his house, but it—and his wife—were gone. Four days later, Doris Frisbie’s body was found under rocks 200 yards below where her home had stood.

The family dog was found buried up to its eyes and nose. Despite numerous broken bones, it survived.

While most of the damage from the June 27, 1995, flood occurred in Madison County, a second cell just north of Old Rag Mountain poured torrents, although in lesser amounts than in Madison, onto Rappahannock County.

Above Little Washington, in Harris Hollow, 43-year-old Kirk Davis was killed when the Rush River swept him and the shed in which he was working away.

Across the mountain from Harris Hollow, young Alexa Orantes was camping with her grandparents near Browntown in Warren County. She was swept away, despite her grandfather’s efforts to get her to higher ground. The child’s body was found four days later some 10 miles down the Shenandoah River hanging from a tree branch.

There was also widespread damage along the Thornton River in Sperryville, with cars piled up in the otherwise picturesque creek and along the Hazel River between Sperryville and Etlan.

The flood created scars in the mountains that remain to this day. Whole sections of earth were swept away down to bedrock.

That storm has been the subject of a Weather Channel documentary and has been studied by a number of meteorologists and geologists.

It was one for the record books.