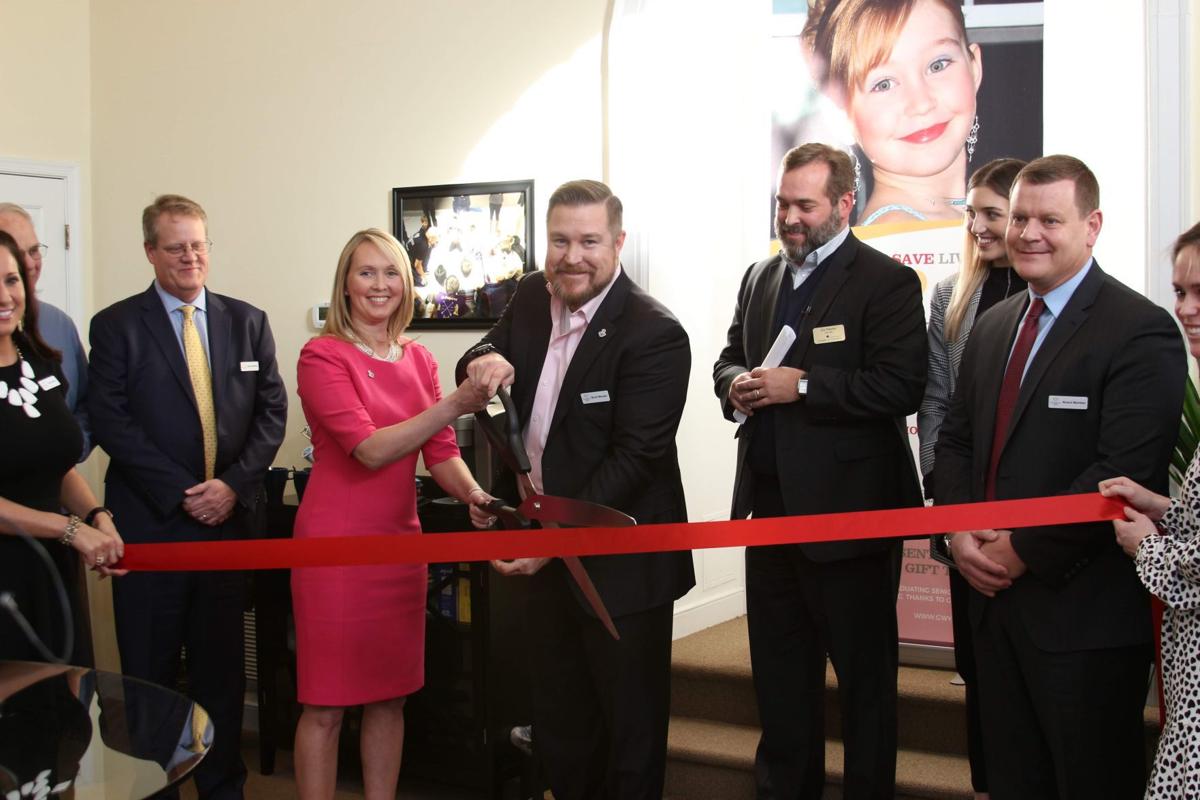 Jennifer and Joel Griffin prepare to cut the ribbon at their foundation’s new office in Fredericksburg. In 2016, Boy Scouts learn how to perform chest compressions during a CPR training sponsored by Gwyneth's Gift and held at Stafford Hospital.

Jennifer and Joel Griffin prepare to cut the ribbon at their foundation’s new office in Fredericksburg.

In 2016, Boy Scouts learn how to perform chest compressions during a CPR training sponsored by Gwyneth's Gift and held at Stafford Hospital.

A photo of young Gwyneth Griffin, dressed for Halloween like a princess with hair up and earrings dangling down, looked over those gathered for a ribbon-cutting ceremony.

The occasion marked the first brick-and-mortar office for Gwyneth’s Gift Foundation, a nonprofit formed after Gwyneth died in 2012 after suffering a sudden cardiac arrest. She was 13, a rising eighth-grader at A.G. Wright Middle School in Stafford County.

The attack didn’t claim her life, but going without cardio pulmonary resuscitation caused an unrecoverable brain injury. She died seven weeks after she passed out on the school track.

Since her death, parents Joel and Jennifer Griffin have formed the foundation to make sure that those who suffer from the same kind of attack have a greater chance of survival. They push for training so community members know how to administer CPR and use an AED, or automated external defibrillator.

A cardiac arrest is triggered by an electrical malfunction; the heart can’t pump blood to the brain, lungs and other organs. Death occurs within minutes if the victim does not receive treatment.

The Jan. 30 ribbon-cutting ceremony included the Griffins and members of the Fredericksburg Regional Chamber of Commerce. More than 40 people attended as Fredericksburg Mayor Mary Katherine Greenlaw described the positive changes the parents have made in their community—and beyond.

With support from then-Del. L. Mark Dudenhefer, they pushed for Gwyneth’s Law, passed in 2013, which requires all Virginia teachers to be certified in CPR and all high school graduates to have CPR training.

The foundation also provides education and public awareness campaigns, training, scholarships and funding for the purchase of AEDs in schools and other public places.

In a letter to the Griffins, U.S. Rep. Rob Wittman, R–1st District, said their commitment to educating others “will have a lasting impact for generations to come.”

Programs have grown since June 2015, bringing the need for office space, Jennifer Griffin said. The foundation is operating from the George Washington Executive Building, Suite 101 at 2217 Princess Anne St. in Fredericksburg.

“To account for this growth and new staff, we decided it was time to move to a more prominent location,” she said. “We are excited about this new endeavor. By being a member of the communities we serve, our programs have a more significant impact.”

Gwyneth’s Gift plans to continue its work strengthening the “chain of survival” through awareness, training and AED programs. That refers to the chain of events that must happen, quickly, to improve a person’s chance of survival.

About 365,000 people in the United States suffer a cardiac arrest each year and on average, about one in 10 survives, according to the Sudden Cardiac Arrest Foundation.

“The majority of people who survive invariably receive immediate help from bystanders at the scene,” the foundation added.

Gwyneth’s Gift continues to provide training for bystanders, and a recent grant from the Stafford Hospital Community Benefit Fund will support the efforts.

The grant will purchase four AEDs in high traffic areas of Stafford and be used to train at least 500 people in hands-only CPR and the use of the defibrillators.

Gwyneth's Gift Foundation partners with local hospitals, first-responders, educators, civic group and private businesses to offer training in CPR and the use of automated external defibrillators, or AEDs.

The foundation provides all the needed equipment and offers free CPR Anytime kits from the American Heart Association for adults and children who participate in their training program. The kits allow users to learn CPR skills anywhere, from large group settings to their own homes,  and are designed to be shared.

For every kit distributed, the American Heart Association estimates that 2.5 additional people are trained.