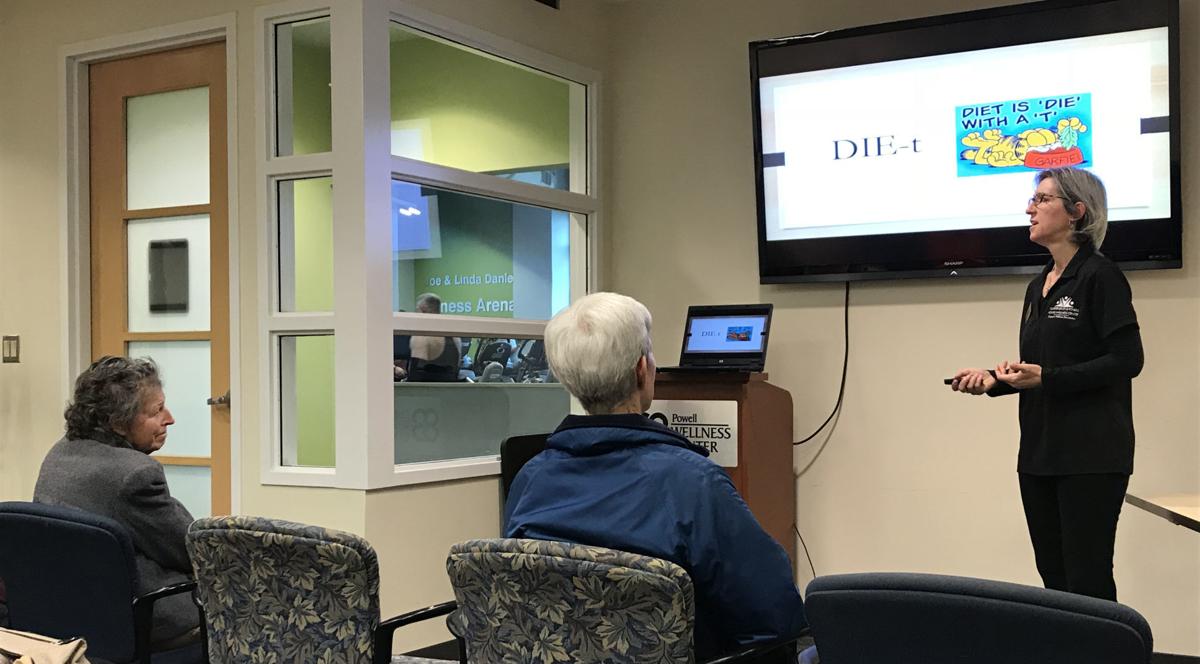 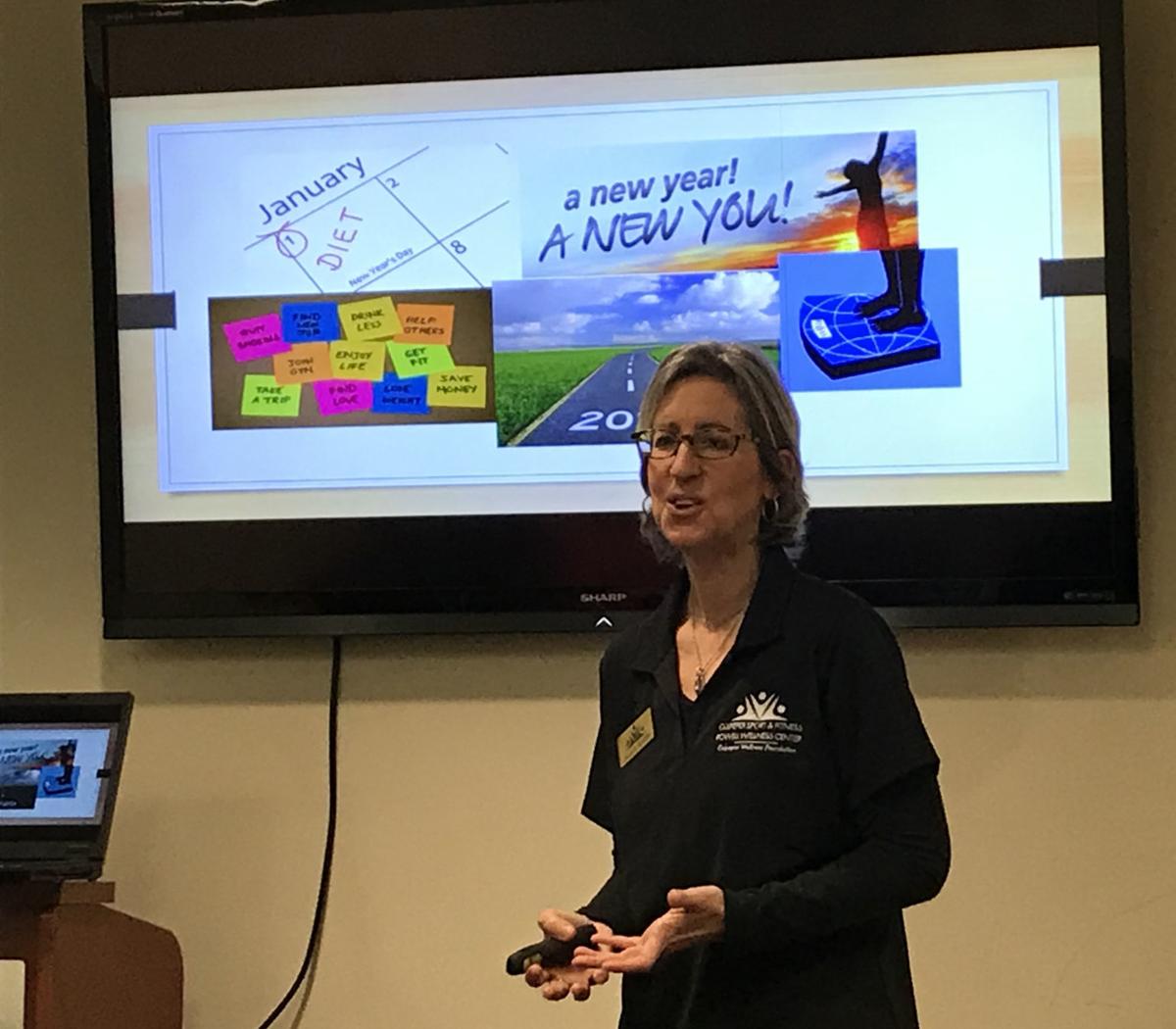 Jena S. Griffith, an integrative dietitian nutritionist at Powell Wellness Center, leads a recent program addressing the age-old question, “Should I be on a diet?”

Jena S. Griffith, an integrative dietitian nutritionist at Powell Wellness Center, leads a recent program addressing the age-old question, “Should I be on a diet?”

With the New Year comes an inevitable multitude of Americans vowing to lose weight by employing any number of fad diets.

The Keto diet is the new Atkins Diet, eliminating carbs and loading up on proteins. Macrobiotic diets base food intake on Zen Buddhism. The snake diet requires long periods of fasting interrupted by a single meal. There is intermittent fasting, vegan and grapefruit diets, all contributing to a U.S. weight loss market worth $72 billion, according to Business Wire.

But buying into such plans with promises of quick weight loss is often a losing proposition.

That was the message presented by Powell Wellness Center integrative dietitian nutritionist Jena Griffith during a recent program, “Should I be on a Diet?” She offered counsel during the free, one-hour Health Matters class directing attendees to simpler eating of whole foods and more time outdoors.

Diets fail because they only focus on weight and calories, while ignoring lifestyle elements like stress, the environment, sleep quality and relationships, Griffith said.

“It only focuses on losing weight instead of gaining health,” she said. Instead, she encouraged program attendees “to commit to the basic, un-sexy foundations of nutrition and health.”

Shift your lifestyle and constantly add new foods based on the season—fruits, vegetables, seeds, legumes and some whole grains.

She also encouraged getting better sleep by spending more time outdoors in the morning sunlight and limiting artificial light at night. Not doing so, Griffith said, can interrupt a person’s natural Circadian rhythm, the internal sleep-wake process that repeats roughly every 24 hours. Over time, interruption to it can case loss of melatonin, a hormone that regulates the sleep-wake cycle, and result in weight gain.

Powell Wellness Center Fitness Manager Patricia Barklund mentioned the personal benefits of getting outside in the morning to soak in the sun, a practice she has put in place for the past several months, walking with her dog.

“It has reduced my stress,” Barklund said, noting she takes off her sunglasses during the stroll. “Even my high-strung dog is better.”

Barklund said she also does meditation and yoga and has replaced her high-intensity workouts with more walking to achieve a calmer life.

The diet industry wants you to fail, said Griffith, a 20-year dietitian and resident of Madison County.

“They don’t care about you and they are betting on your failure,” she said. “The message from the media is you are broken.”

Less than half Americans who set out to “diet” in the New Year find that commitment left on the wayside by June, according to the U.S. Dept. of Agriculture. A reason for the waning interest is that resolutions are often unrealistic, expecting immediate perfection.

“It’s a great marketing ploy for the New Year—new you,” said Griffith. “But are we really new? We are the same person. What else will be different?”

More than 90 percent of people who lose weight on a diet will regain it again within five years, she said. There are more people on diets than ever before and yet more than 93 million adult Americans are considered obese. Diets lead to weight cycling, Griffith said, with people returning to how they ate before the diet—and then some.

“The weight is harder to lose. They get hungrier, heavier, moodier,” she said, leading to disordered eating and obsessive thoughts of food.

A change in eating should be slow and gradual, Griffith said, while recognizing the miracle that is the human body. A person takes 23,000 breaths per day and their heart beats 100,000 times, she said.

“You have 70 trillion cells performing 1 septillion functions. Every four days your body creates a new digestive lining. Even seven to 10 years, our bones remodel,” Griffith said. “Our body does all these amazing things—so please have faith in it.”

Diets can create destructive cycles, starting with restricting food. This leads to guilt, shame, fear and deprivation, followed by giving in to temptation and then starting to diet again. People can become obsessed with counting calories, and yet it’s not effective, said the dietitian.

“When you deprive yourself of pizza, that’s just ludicrous,” said Griffith. “I don’t know anybody like that who is happy. To live in 100 percent perfection, that is an issue,” she said, adding it can lead to isolation. “You are the best person to decide what to eat and what is best for you.”

Griffith said she generally follows and recommends the 80/20 formula for eating—80 percent healthy and 20 percent for special occasions, eating out or other times for less stringent guidelines. For those who want to lose weight, a calorie deficit of some kind will be required, the dietitian said.

Griffith encouraged those seeking to live a healthier life to do their homework and consult with a health practitioner while embracing patience, personal responsibility and consistency. Be aware of how certain foods make you feel, she said, and do what works for you. Learn how to de-stress through meditation or walking, and maybe a garden.

One program attendee asked about the accuracy of food nutrition labels. The dietitian said the more important question is why are you looking at a package?

“It’s still processed food. Ideally, we are growing our own food,” Griffith said, adding food labels are mostly accurate. “The most important thing is that it has a label.”

Whole foods like chicken, rice or oranges don’t have a label because they don’t have ingredients. Another program attendee noted the convenience of frozen and canned foods.

Griffith responded, “It doesn’t take a lot of time to walk to your backyard and pick your collard greens.”

Mary Lou Taylor, a retiree who attended the program, moved to Culpeper about five years ago. “I work out two to three times a week,” she said.

Taylor said she eats well-proportioned meals with fresh veggies and limits her eating to daytime hours and avoids eating at night.

She added, “I think I am doing the right thing.”