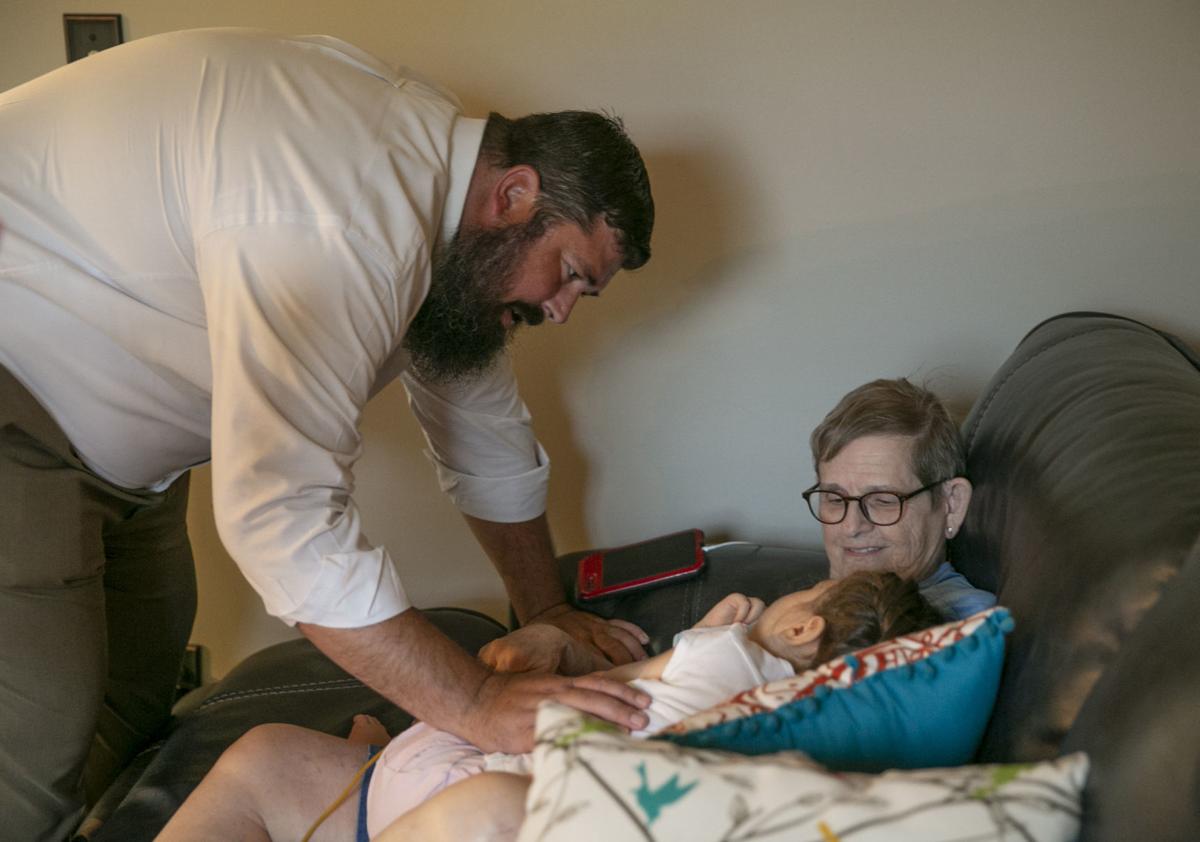 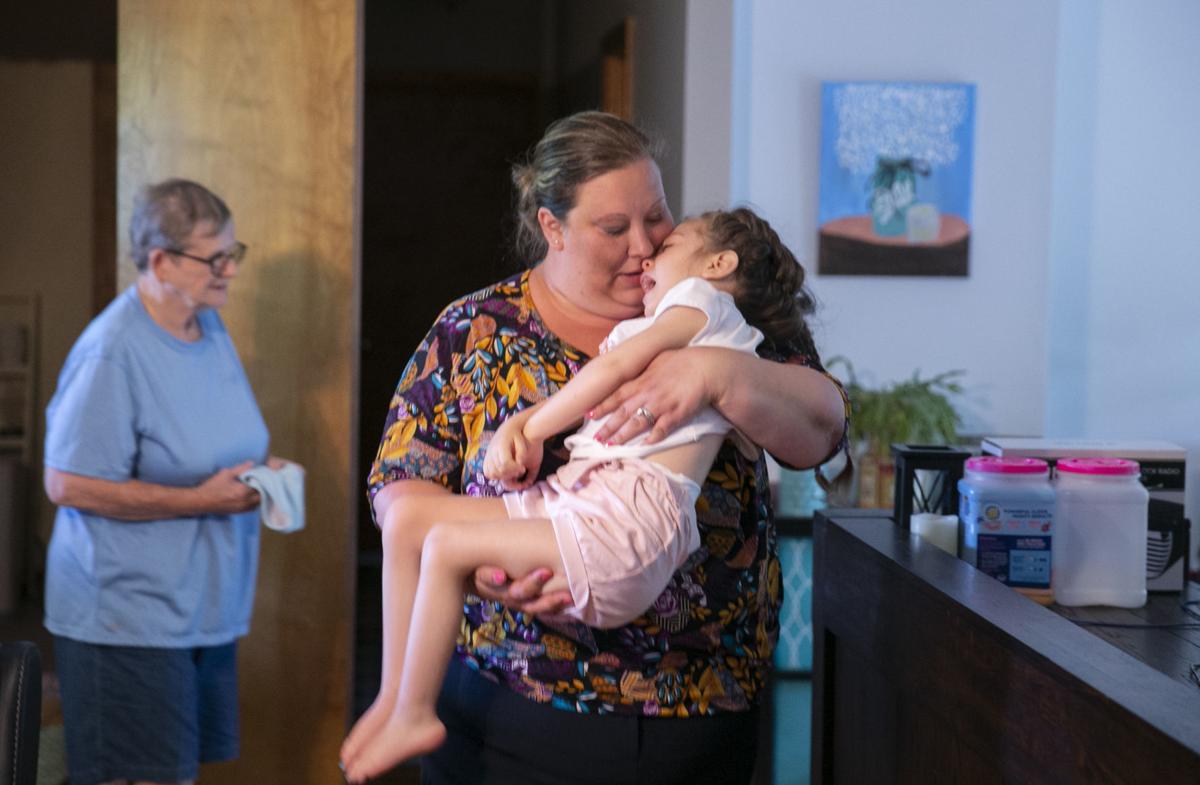 Mary Mullins cradles her daughter, Kynslee, who stopped toddling and talking at 14 months. Now 4, she can no longer crawl or hold up her head. 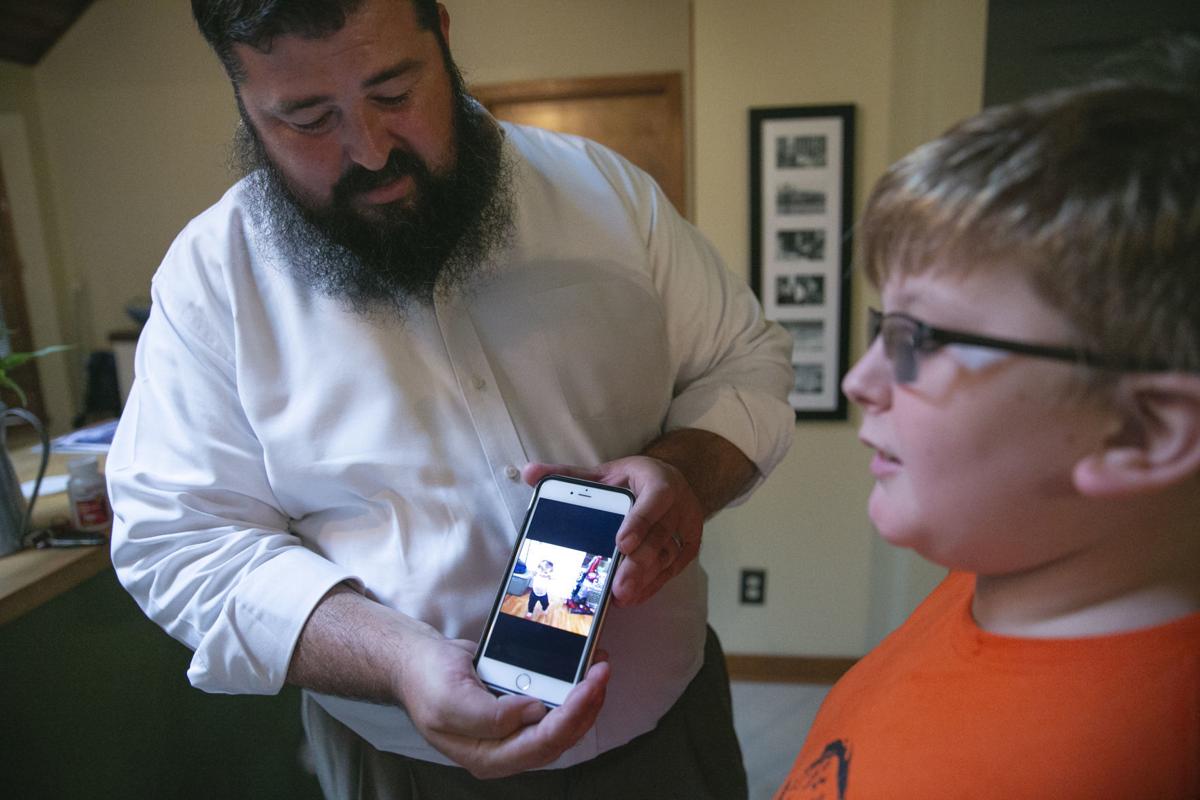 Daniel Mullins and son Zane watch a video of Kynslee when she was first learning to walk. The family is seeking a precise diagnosis for the girl, now 4, who can’t crawl, talk or hold her head up.

Mary Mullins tickles her daughter Kynslee, 4, at their Spotsylvania County home. Kynslee lost the use of most of her body and doctors have been enable to provide a precise diagnosis. 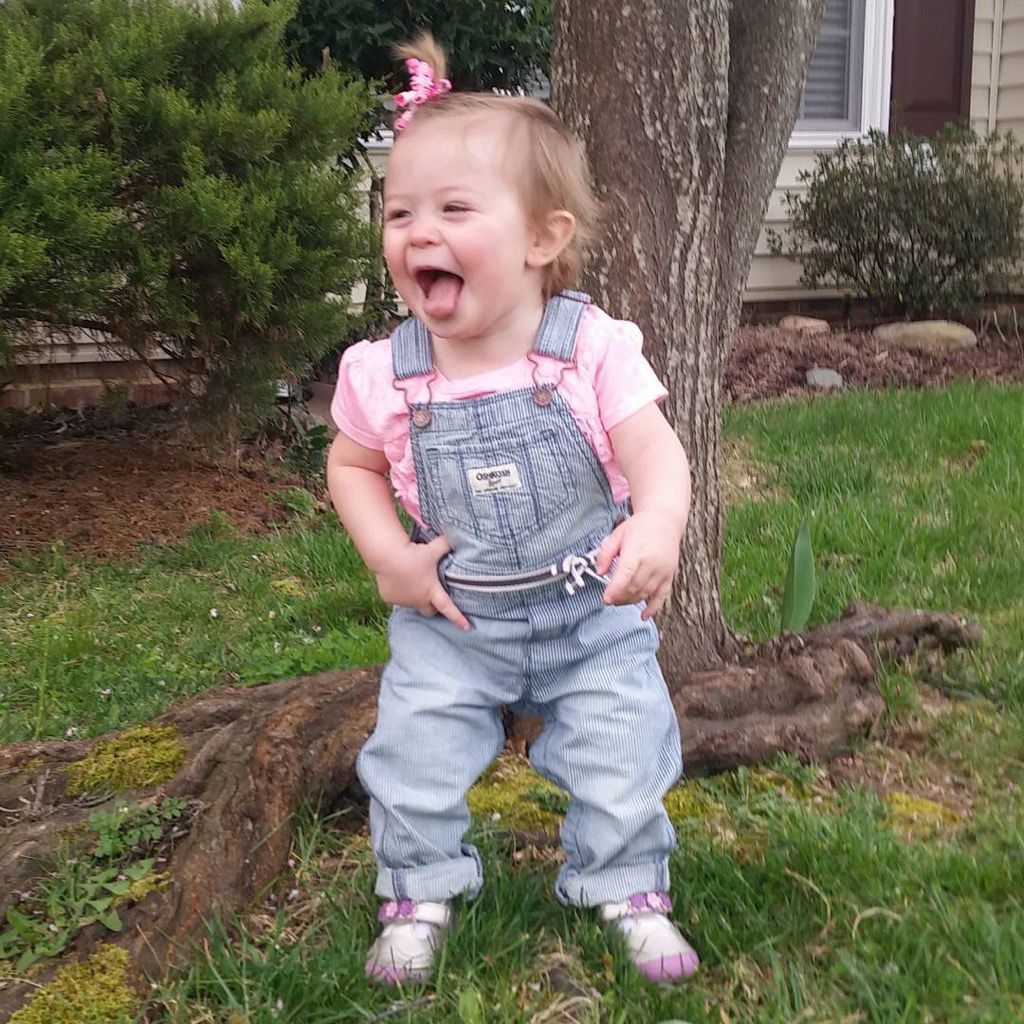 Mary Mullins cradles her daughter, Kynslee, who stopped toddling and talking at 14 months. Now 4, she can no longer crawl or hold up her head.

Daniel Mullins and son Zane watch a video of Kynslee when she was first learning to walk. The family is seeking a precise diagnosis for the girl, now 4, who can’t crawl, talk or hold her head up.

Mary Mullins tickles her daughter Kynslee, 4, at their Spotsylvania County home. Kynslee lost the use of most of her body and doctors have been enable to provide a precise diagnosis.

Dan Mullins shares a photo of his daughter when she was a toddler, before everything changed.

In the image, Kynslee is wearing blue-striped OshKosh overalls and a pink shirt with a matching ribbon in her hair, which is pulled atop her head, Pebbles-style. She’s standing in front of a tree with roots as almost as big as she is, laughing and sticking out her tongue.

That was in 2016, before Kynslee woke up “without the use of her entire body,” as her mother, Mary, describes it. She was 14 months old then, just learning to walk and talk, when she suddenly stopped doing that—and more.

Now almost 4½, Kynslee can’t sit up or hold up her head, roll over or crawl. She’s fed through a tube in her stomach, but spits up often and has so much trouble swallowing that choking is a constant concern.

Her parents have traveled from their Spotsylvania County home to seven different hospitals—in Richmond, Baltimore, Pennsylvania and Wisconsin— searching for answers and finding none.

“What we do know is she has had every genetic test that is available, and they all are normal,” Kynslee’s mother said. “Her brain has shrunk, and she has white matter all over her brain, but no one knows why.”

The Mullinses said they been given a “presumptive” diagnosis on what might have caused her condition, not a definitive one confirmed by clinical tests. The presumptive diagnosis is Acute Disseminated Encephalomyelitis, or ADEM, a rare disorder in which the body’s immune system attacks its own brain tissue.

“It often follows viral or bacterial infections, or less often, vaccination for measles, mumps or rubella,” according to the National Institute of Neurological Disorders and Stroke.

Kynslee’s parents say the vaccination part of the disorder applies to their case. They believe a flu shot caused the damage, although they have no medical reports that connect it to their daughter’s condition, Dan Mullins said. He says doctors and nurses typically stop taking notes about Kynslee’s medical history when he mentions the flu shot.

A former football player at Stafford High School, he has a thick black beard, and he tries his best not to cry as he talks about the changes in his family’s life since Kynslee’s health deteriorated. He says he’s “not an anti-vaxxer,” a person who vehemently opposes vaccinations.

When his daughter’s pediatrician said Kynslee needed shots, he and his wife followed the doctor’s orders.

“We did it without even knowing this was a possibility,” he said, tilting his head toward the couch where his daughter was being held by a caregiver. “And everybody should know this is a possibility.”

There are few medical issues as controversial as not getting vaccinated. A 2016 report in The Journal of Pediatric Pharmacology and Therapeutics called parental refusal of vaccines a growing concern and cited the fear that preventable diseases will make a comeback because children aren’t getting vaccinated.

The World Health Organization considers vaccinations the most cost-effective ways of avoiding disease as they prevent up to 3 million deaths a year. “Vaccine hesitancy,” the reluctance or refusal to vaccinate despite their availability, is No. 8 on the organization’s top 10 threats to global health in 2019.

But as Dan and Mary Mullins discovered, there’s a federal program that provides compensation to those found to have been injured by vaccines.

Called the National Vaccine Injury Compensation Program, or VICP, the program is “a no-fault alternative to the traditional legal system for resolving vaccine injury petitions,” according to its website, listed under the Health Resources and Services Administration heading.

The first line on the VICP’s home page says “vaccines save lives by preventing disease,” followed by “most people who get vaccines have no serious problems.”

It continues: “Vaccines, like any medicines, can cause side effects, but most are very rare and very mild. Some health problems that follow vaccinations are not caused by vaccines. In very rare cases, a vaccine can cause a serious problem, such as a severe allergic reaction.”

It’s in those rare cases that the program may provide compensation, according to the website.

ONE IN A MILLION

VICP was created in the 1980s “after lawsuits against vaccine companies and health care providers threatened to cause vaccine shortages and reduce U.S. vaccination rates, which could have caused a resurgence of vaccine preventable diseases,” the website states.

Any individuals who believe they were injured as a result of a vaccine—or their parents, guardians or legal representatives—can file a petition seeking compensation.

The Mullinses have done just that; their attorney has filed with the U.S. Court of Federal Claims. From there, medical officials with the Department of Health and Human Services will review their petition, determine if it meets the criteria and make a recommendation.

Then, the Department of Justice will develop a report that includes the medical recommendation and legal analysis and submit it to a court-appointed “special master,” who decides if the petitioner should be compensated, and if so, for how much.

From 2006 to 2017, more than 3.4 billion doses of vaccines covered by the VICP were distributed in the United States, according to the Centers for Disease Control. In that same time period, 4,363 individuals were compensated for a vaccine injury.

“This means for every 1 million doses of vaccine that were distributed, approximately one individual was compensated,” the VICP website states.

The compensation totaled $4.1 billion, meaning that the awards averaged $617,562 each.

Dan and Mary Mullins work at Purvis Ford, where she’s the internet director and he’s a sales consultant. Each missed time for extended periods in the early days after Kynslee’s health changed—the mom was gone 11 months straight—and if the couple isn’t selling autos, they’re not making money.

“We’ve lost a ton of work, and it’s hard to make up that kind of cut,” the father said.

That’s why his mother and brother, Mae and Derrick Mullins, held a motorcycle ride last year to raise money for the family. It netted $11,000.

The second annual event is planned Aug. 3. The ride begins at 1 p.m. at the Fas Mart on State Route 3 near Locust Grover and will end at the Tuckahoe Motorcycle Club in Stafford County. Registration opens two hours before the ride, and the cost is $20 for riders and $10 for passengers.

A taco bar dinner will be served at 4 p.m. at the motorcycle group’s clubhouse, and Kynslee’s 10-year-old brother, Zane, will do the cooking. He’s looking forward to the social exchange.

“I’m going to find a way to talk to everyone who orders,” he said. “I could talk for days, as long as I had water.”

His parents have tried to provide some sense of normalcy for him through Kynslee’s illness. They’ve kept him enrolled in sports, clubs and cooking classes.

Family members help, as well, shuttling him to activities or staying with Kynslee, who requires constant care. Medicaid pays for her treatments, medicine and caregivers who stay with her about 53 hours a week.

“She’s been my little pride and joy,” said her grandmother, Mae Mullins, adding it’s been difficult for relatives to adjust to the life-changing events. “It’s been a long road for the family, I’ll tell you that much.”