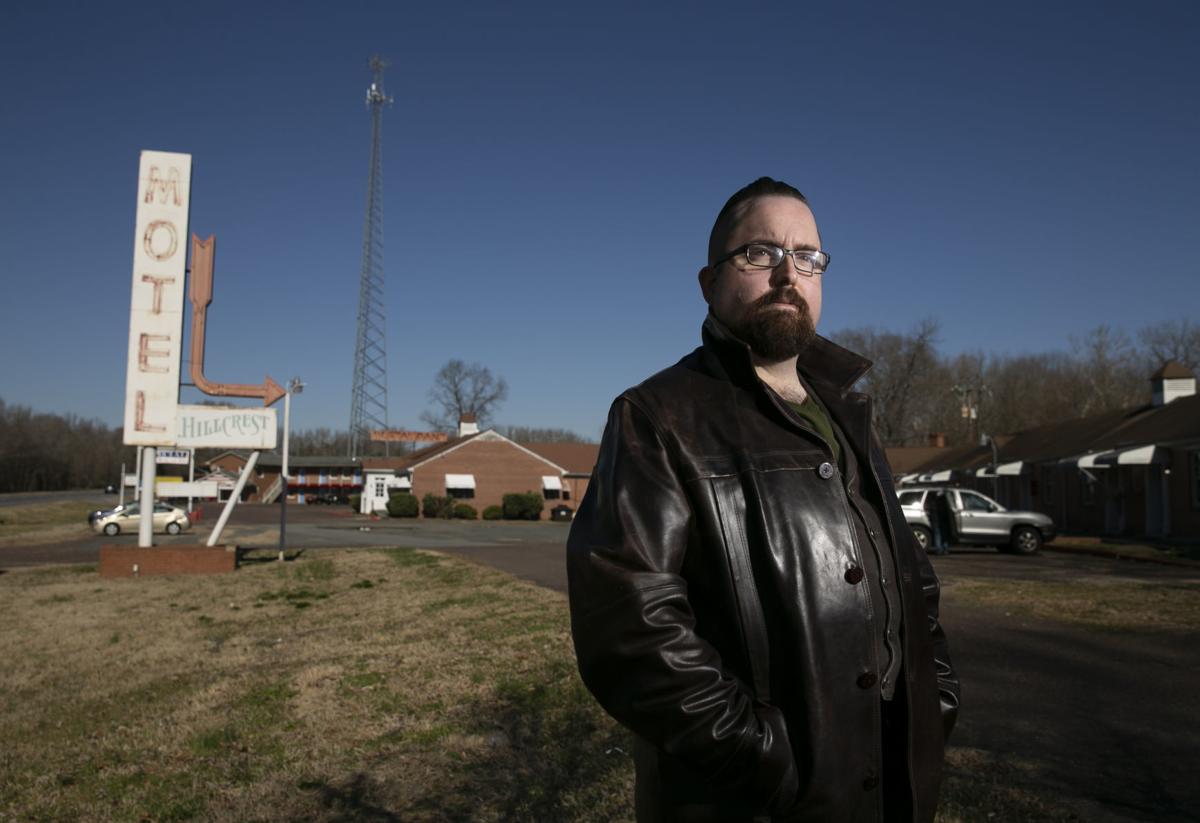 Sean Gates stands outside the Hillcrest Motel in King George County. The motel is a key setting in Gates’ historical fiction novel, ‘A Dark and Lonely Road,’ which takes place in the late 1950s. 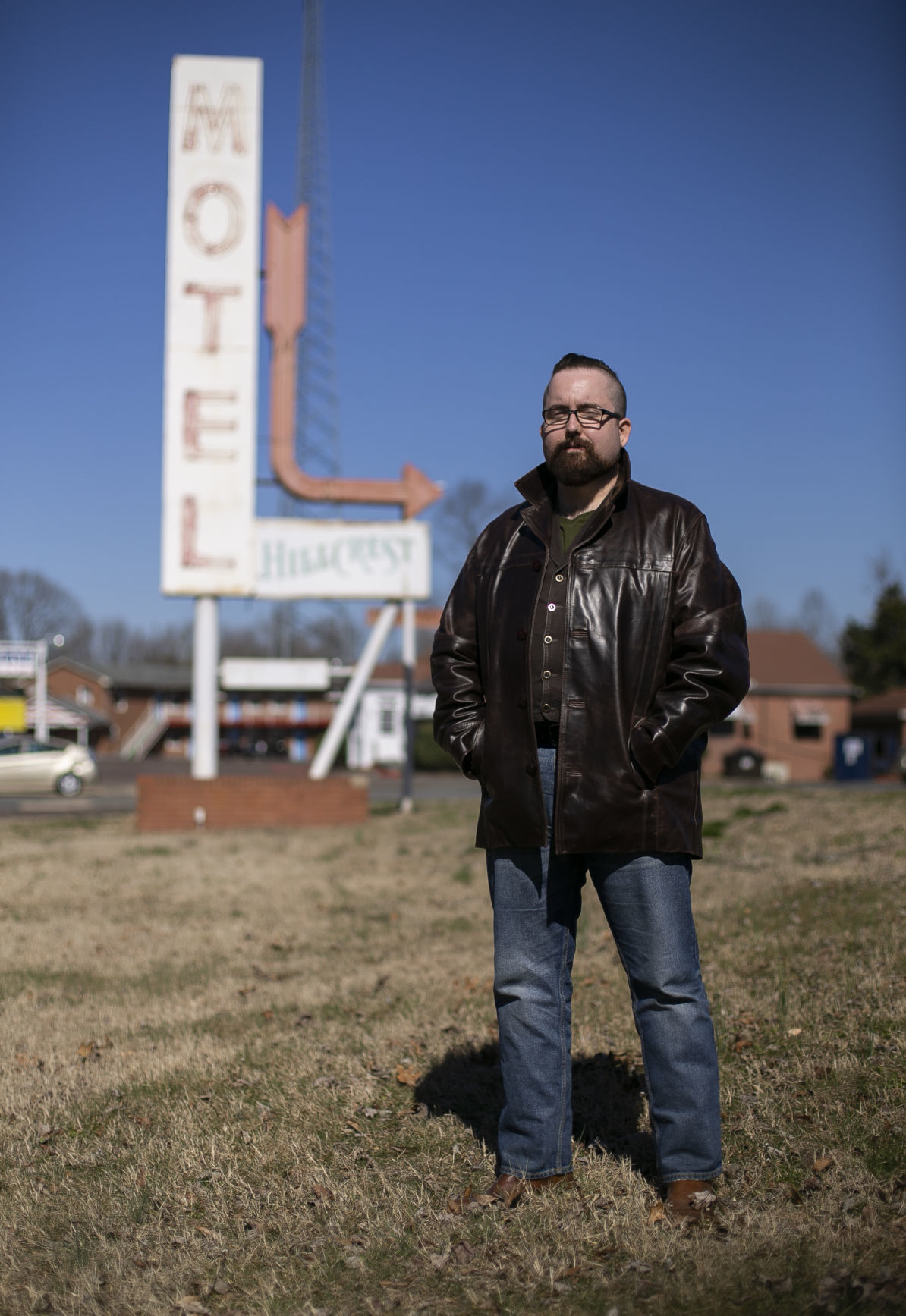 Sean Gates stands outside the Hillcrest Motel in King George, Virginia on March 12, 2019. The motel is one of several King George locations that appear in Gates’ new novel A Dark and Lonely Road. 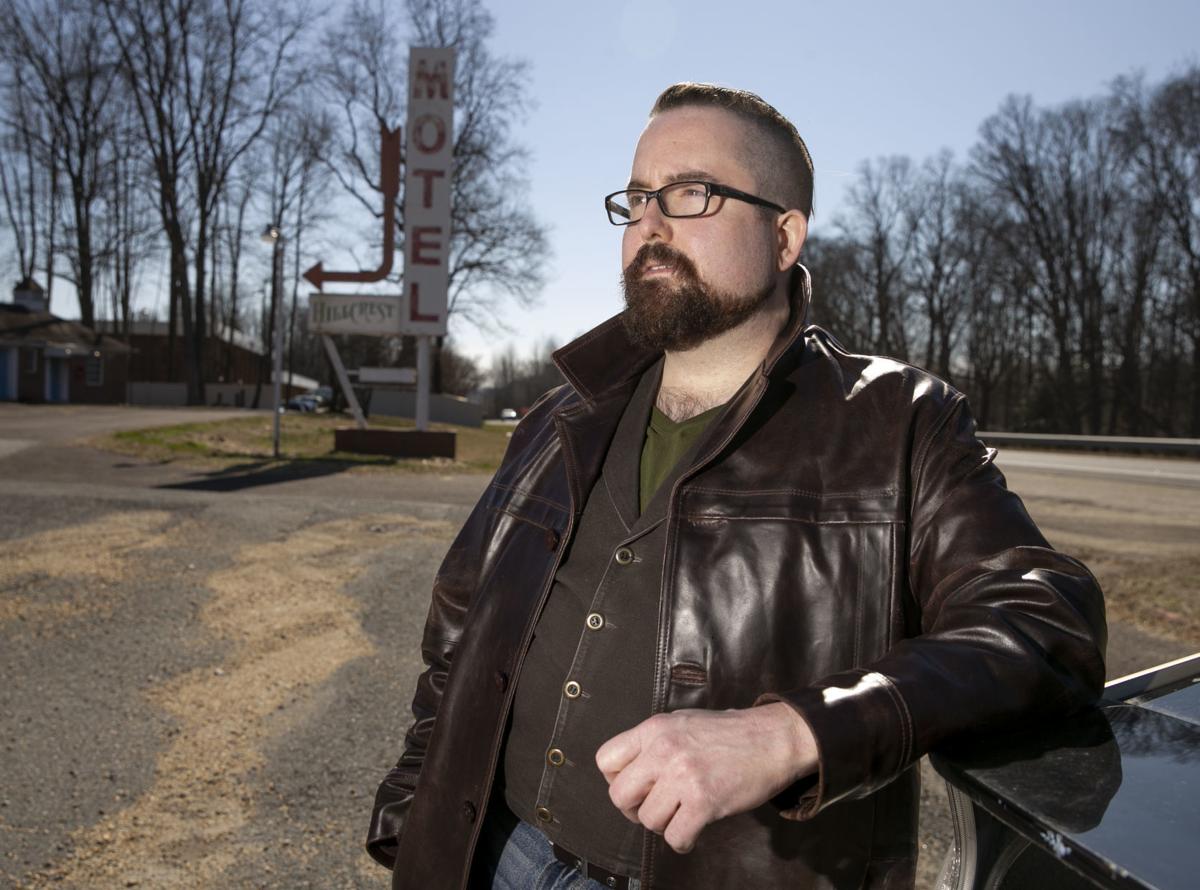 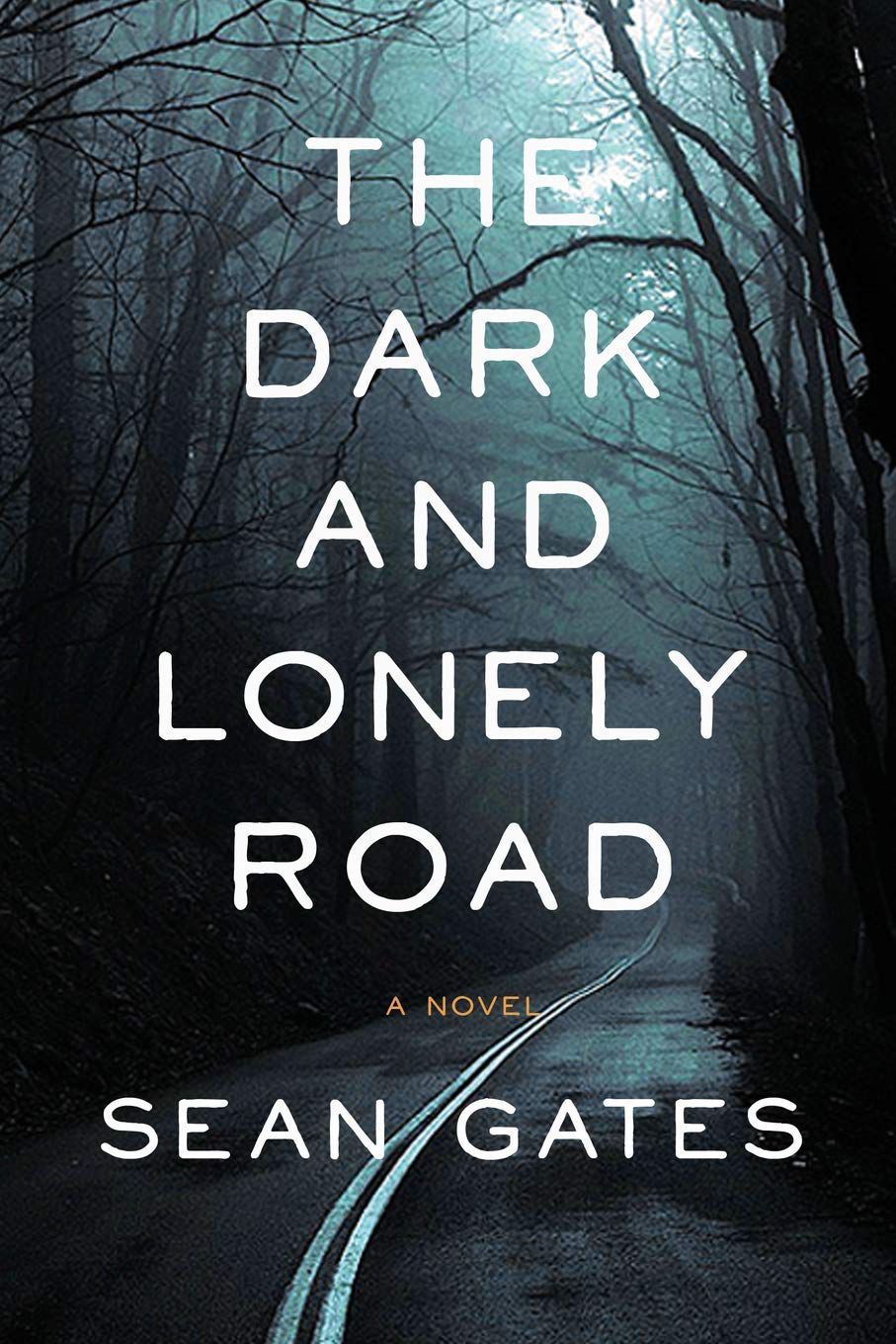 Sean Gates stands outside the Hillcrest Motel in King George County. The motel is a key setting in Gates’ historical fiction novel, ‘A Dark and Lonely Road,’ which takes place in the late 1950s.

Sean Gates stands outside the Hillcrest Motel in King George, Virginia on March 12, 2019. The motel is one of several King George locations that appear in Gates’ new novel A Dark and Lonely Road.

Writing a novel set in King George County in the late 1950s gave Sean Gates the chance to revisit the county history he’s always loved—and to embellish it with some shady characters from the Greek mafia.

The 42-year-old admits he’s taken some creative license in “The Dark and Lonely Road,” but it can be hard to tell where reality ends and fiction begins.

Gates grew up in King George, and his descriptions of well-known places build on what he knew as a boy in Dahlgren. He describes work in the “pickle factory,” the former Mount Rose Canning Co., as well as rooms in the still-operating Hillcrest Motel. He mentions former Sheriff Sam Dishman and the fact that in the late 1950s, “most everything belonged to either the Morrises or the Clifts.”

Gates had researched the history of Bayberry Estates, the subdivision of his youth, for a story he wrote for Project94. That’s a blog started last year by four members of King George High School’s Class of 1994—Gates, Neil Richard, Sarah Snow and Jeremy Bertz. The group regularly reports on county news and events.

As he checked county deeds and old newspapers, Gates learned about a small airport formerly run by the Burgess family. He knew the airstrip had been forced to relocate when the Dahlgren Navy base expanded and that it moved to property that eventually became Bayberry. As a boy, he and a friend had climbed through loose fence boards and inspected what remained of the broken-down hangar.

But the interesting part of the story came before ground was broken for the subdivision. When the rural property was sold to developers from Washington and Maryland, “the string of deals made in connection with the development [was] surprisingly convoluted,” Gates wrote in the Project94 history.

“I saw a lot of things that looked like shady deals,” Gates said in a recent interview about investors with ties to notorious slumlords, those who defrauded the government and the Greek mob. “I can’t prove it, or it’s just so old, the answers have been lost.”

In the book, Gates included out-of-state gangsters ready to kill for what they wanted—but first they had to contend with protagonist Hieronymus “Harry” Cogbill, a World War II veteran with more than his share of combat scars.

“He’s about my age, and I gave him some of my depression and anxiety and PTSD [post-traumatic stress disorder] because he wasn’t screwed enough already,” Gates said in the same sarcastic tone that resonates in the book. “I can’t fix my character, but I can fix his.”

He also added a little romance to the history–mystery in the form of Ethel Burkitt, a young King George woman who’s anything but a damsel in distress.

Cogbill is clearly charmed by Ethel the first time they meet, and she later asks: “What did it for you, Mr. Cogbill? Was it the overalls, the chicken droppings on my boots or the sweat in my hair?”

For Gates’ friend and former roommate, Clayton Spinney of Warrenton, it was all of the above, plus the author’s historical research.

“He would show me old maps and documents and talk about these land deals, developments and shady, interwoven business relationships, and you could see his wheels turning,” Spinney wrote in an email. “The plot of the book owes a lot to that research, and while he made his own characters and took significant dramatic license, it’s so grounded in the truth that the story feels very plausible.”

Gates named his character Cogbill after some Chesterfield County relatives and called his book a work of historical fiction. In his first description of 1959-era King George, he calls the county “a dusty, mainly forgotten saddle-shaped piece of Virginia in the bend of the Potomac River, an hour south of Washington.”

He spent a lot of time at the L.E. Smoot Memorial Library, asking for “dusty tomes out of some unseen dungeon,” or at the Clerk of the Court’s Office. He got history lessons from Sandra Conner, Gene Clift, Peggy Mullen and Elizabeth Nuckols Lee, a retired physicist who, with Jean Graham, wrote “King George County, A Pictorial History.”

In the book, Gates is keen on having the reader see the county through his eyes—or nose, as when the characters visit Fredericksburg and inhale the aroma of the former FMC cellophane plant. The locals used to call it the smell of money, but Gates described it as the “wet, putrid funk of wood pulp and sulfur, like an outhouse on a sweltering summer day.”

On every drive through pastoral locations, he gives such intricate descriptions that his directions sometimes read like GPS details.

Gates is the son of Rob and Beverly Gates. His father was the technical director at the Navy base and is a board member of the Dahlgren Heritage Foundation. From what he’s learned from them and his own firsthand knowledge, “he’s a pretty good resource for history questions on King George and Dahlgren,” said Richard, a fellow founder of Project94. “He’s just smart, has a good memory and knows his stuff.”

Richard, Gates and Snow go back to 1982, when they were in the same first-grade class at Potomac Elementary School. Gates wrote mostly science fiction in high school and went on to earn a degree in art from Longwood University.

“High school yearbook superlatives don’t always get it right, but him getting ‘Most Artistic’ proved to be true,” Richard said.

Gates self-published the book, which is available through Lulu and eventually will be for sale on Amazon and Barnes & Noble. He opted for printed books, not electronic versions.

“I love the smell of a book, the feel of a book. I’m the guy who still buys CDs and Blu-rays,” Gates said. “It’s not real until I can hold it in my hand.”

The Dark and Lonely Road