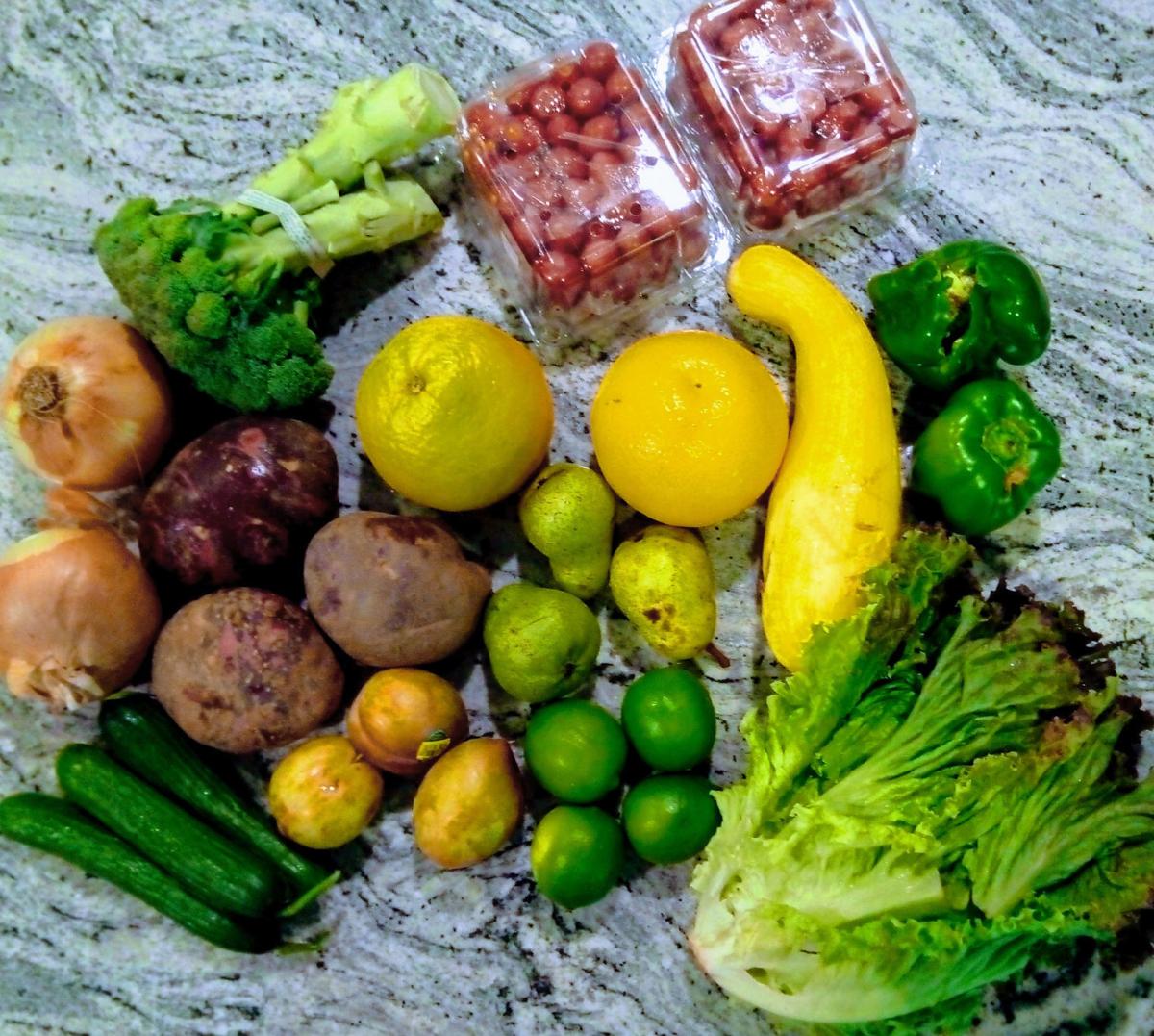 From pears with ugly marks to squash with spots, the Misfits Market box contents inspired a recipe using pluots in a sauce, broccoli in a salad and potatoes cooked up until soft inside and crispy outside. Overly large oranges provided a snack for the kids and stirred up a delicious sangria. 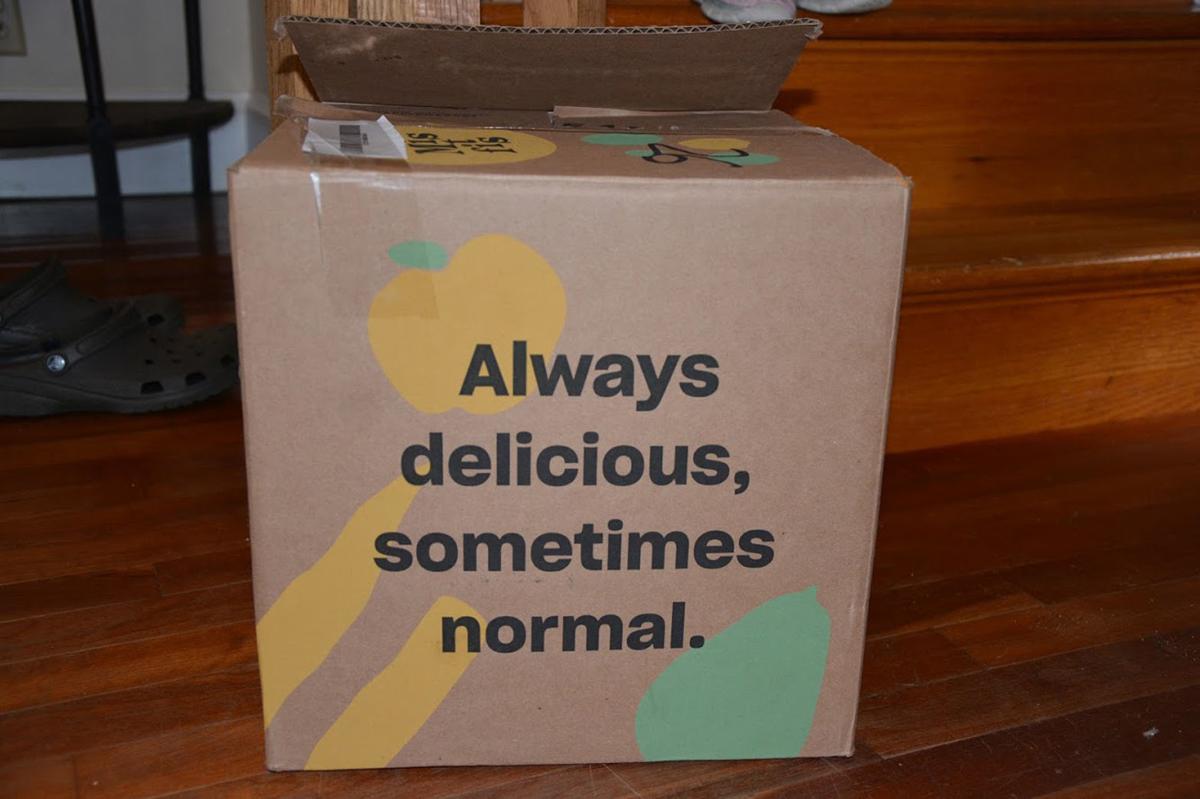 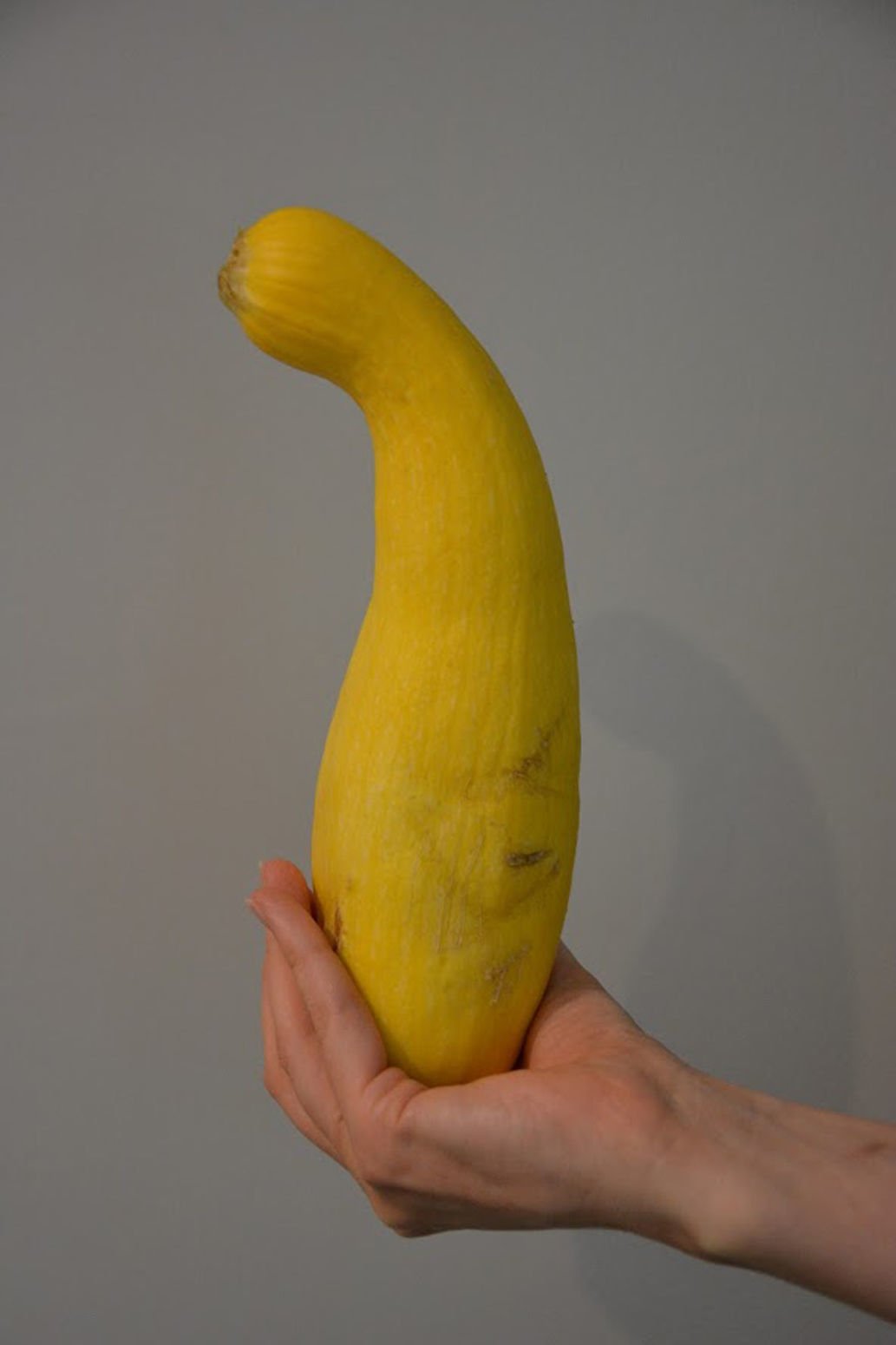 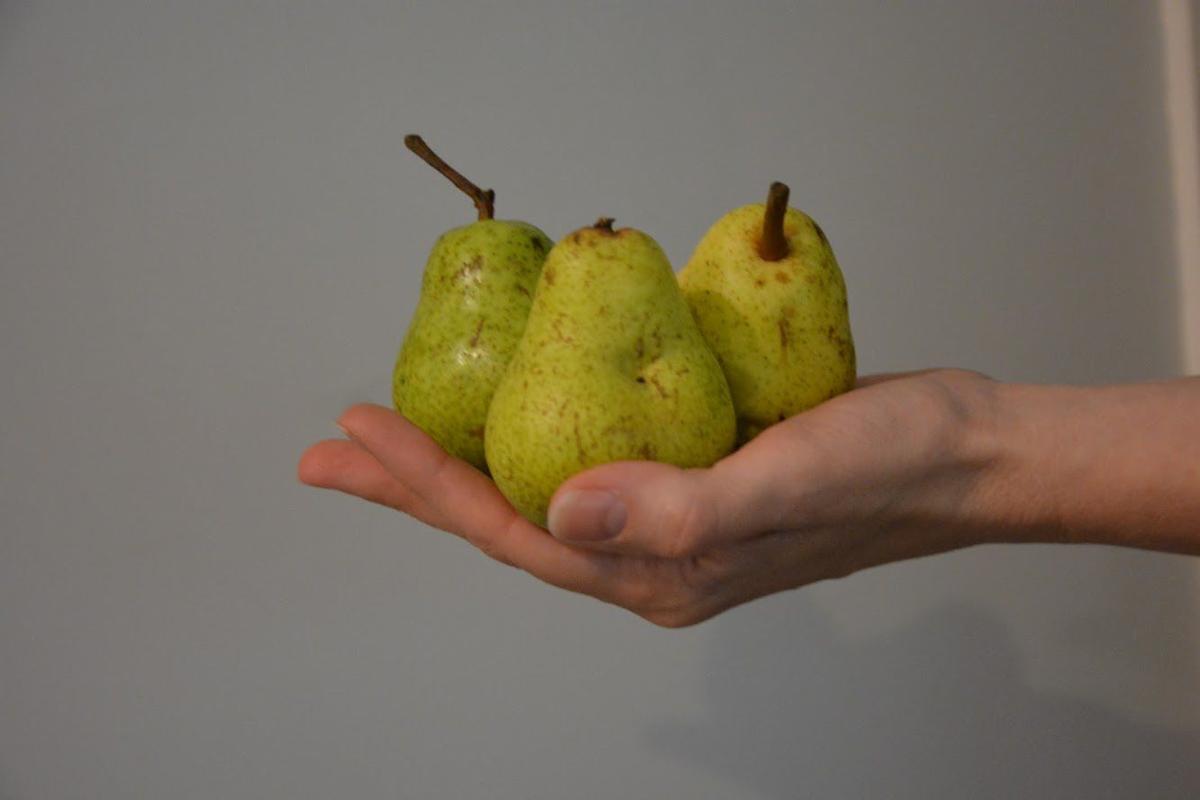 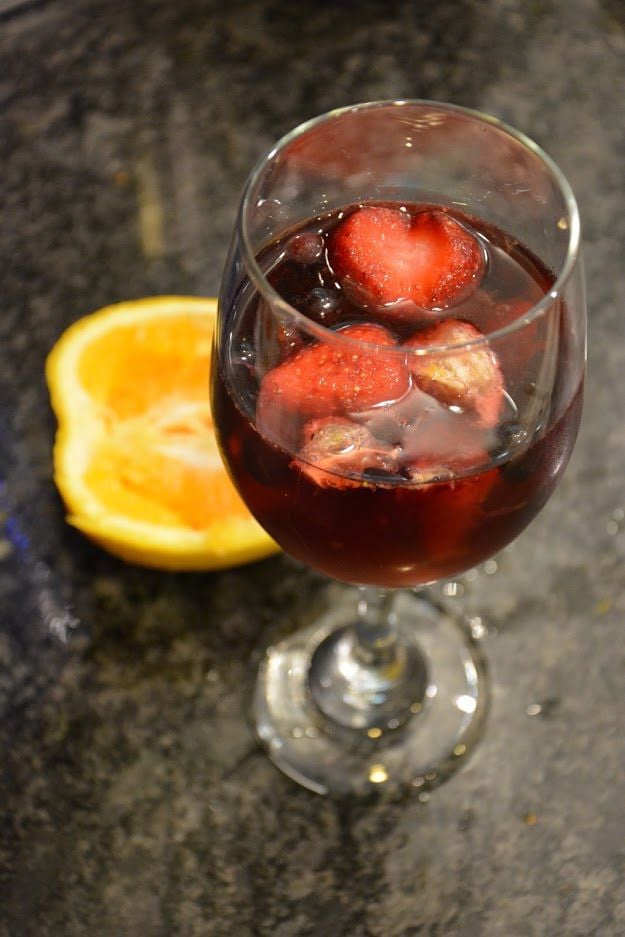 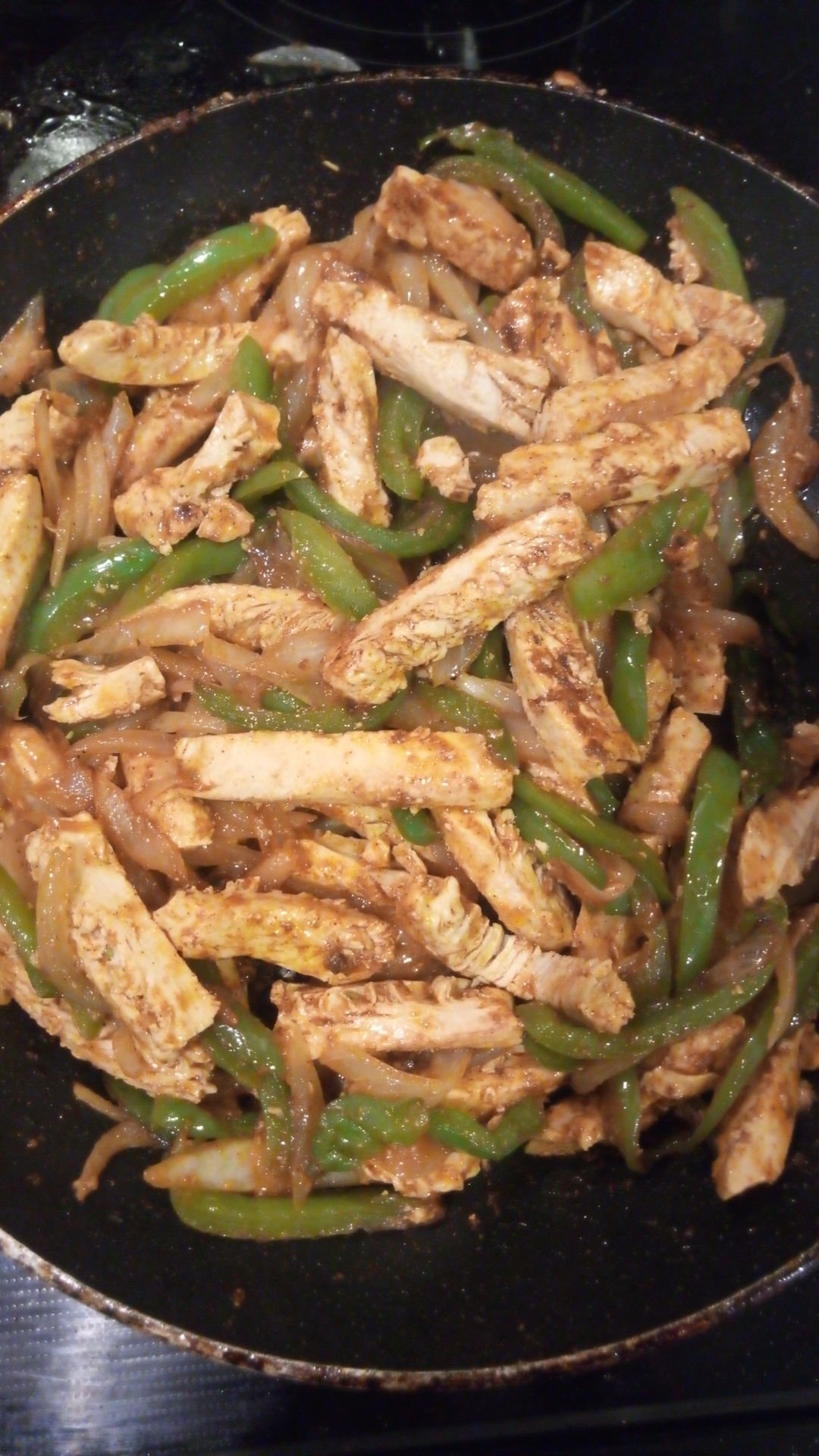 Onions and peppers were an easy addition to a meatless fajita meal.

From pears with ugly marks to squash with spots, the Misfits Market box contents inspired a recipe using pluots in a sauce, broccoli in a salad and potatoes cooked up until soft inside and crispy outside. Overly large oranges provided a snack for the kids and stirred up a delicious sangria.

Onions and peppers were an easy addition to a meatless fajita meal.

The Styrofoam plates at the restaurant my family frequented in the early ’90s frustrated me to no end. I fought back the only way I knew how at age 12. I carved a message into the plate for the owners, who were also the wait staff:

I don’t know if they ever got the message. I moved away, and the restaurant, I hear, has long since changed hands.

What I do know now that I didn’t then: The food I left on those Styrofoam plates was also killing the planet.

Now, going on three decades later, the crisis is reaching a precipice.

A report released by the United Nations last month warned that the exploitation of land and water resources, combined with climate change, is threatening the world’s food supply.

Yet Americans are wasting food at an astounding rate—as much as 40 percent of what’s produced, according to the U.S. Department of Agriculture. That translates to about 66 million tons per year.

It isn’t just that our uneaten food winds up in a landfill, left to emit powerful greenhouse gases as it decomposes, JoAnne Berkenkamp, a senior advocate with the Natural Resources Defense Council, told me in an interview.

“There are greenhouse gas emissions that occur all along the chain from farm to fork,” Berkenkamp said. Wasted food was produced using water, land, labor and energy. It was processed, chilled, packaged, shipped, stored, cooked, maybe stored again.

Put it this way, she said. “If food waste globally were a country, it would be the third-largest emitter of greenhouse gas emissions.”

And here in the U.S., consumers at home—you and me—are the largest source of food waste, Berkenkamp said.

But that fact also offers hope.

“Consumers also have the potential to be a huge part of the solution,” she said. “People should feel empowered. What you do at home really matters.”

The United Nations report had a similar message. We still had time to make changes.

I was guilty. Guilty of buying produce that I couldn’t find a use for or didn’t eat before it rotted. Guilty of buying snacks for the kids that went stale. Guilty of boxing up leftovers that got pushed to the back of the fridge and forgotten. Guilty of thawing out frozen chicken but deciding takeout was easier.

Guilty of so much food waste.

The average four-person family spends about $1,500 per year on food they trash, according to savethefood.com. I knew we were no exception.

We’d made a half-hearted effort at composting. We’d talked about phasing meat out of our diets, at least a few days a week—another big way to reduce our carbon footprint at mealtime.

When I saw an online ad for a company that claimed to cut down on food waste by sourcing “ugly” produce from farmers, I clicked.

Misfits Market is one of a growing number of start-up food subscription services that promises perfectly edible, though odd and occasionally unattractive fruits and vegetables, delivered to your doorstep for about half of what you’d pay at a grocery store.

I asked around; a friend of a friend used Misfits Market and loved it. It came in two sizes; you decide how often it ships, and a regularly updated list on the company’s website gives buyers an idea of what to expect.

I bit, opting for every-other-week deliveries of the smaller “Mischief” box packed with 10 to 12 pounds of organic fruits and vegetables for $19 plus $4.50 shipping. (The price has since risen a few dollars.)

It was kind of like Christmas, pulling out produce somebody else picked, and most everything was recognizable: a head of red-leaf lettuce; an oversized squash; two yellow onions; three cucumbers; four limes; three tiny pears; two green peppers, including one with a few cracks that exposed the core; three big baking potatoes; and two pints of cherry tomatoes.

Less discernible: Two oranges that I at first mistook for either freakishly large lemons or small grapefruits, and a trio of pluots (I’d never even heard of a pluot).

My husband was skeptical.

“You going to eat all that?” he asked.

The red leaf lettuce went into three lunch-sized salads. Easy. My kids ate the little pears once they ripened. I drizzled the squash in olive oil and baked it for a side dish with Beyond Burgers (a meat-free alternative that tastes startlingly like the real thing.)

I considered freezing the broccoli for a quick stir-fry one night but made a favorite summertime salad with it and the cucumbers instead. The onions and peppers went into a batch of meatless Morning Star “chicken” fajitas.

I knew we’d never eat so many cherry tomatoes before they went bad, so I dumped both pints into a blender, added the juice of the Misfits Market limes and a few other ingredients for a big batch of salsa.

Half an orange went into a bottle of sangria; my kids ate what remained for breakfast.

Which left only the potatoes and the pluots. These plum and apricot hybrids are achieved through cross-pollination (and not genetic engineering). You can eat them plain. I decided to be more adventurous.

It required two sets of hands and a good deal of counter space: Cutting potatoes into bit-sized pieces and bringing them to a brief boil; tossing diced pluots into a sauce pan with garlic, onion, salt and sugar; seasoning a pork tenderloin before winding it in bacon. And, finally, transferring everything but the sauce (that goes on last) to a cast iron skillet to bake until it was crispy and golden.

Spoiler: the meal was worth the time and effort.

A week after the box arrived, I was down to one potato, which I carved up into homemade fries cooked in the air fryer.

All of the stems and peelings from my Misfits fare (and one squishy brown spot of an overripe pear) went into the compost, which I’d become religious about, even knocking a tray of corn husks into the floor when I saw it headed for the trash.

“You can’t put that there!” I’d hissed to the offender. “If it goes to the landfill it’ll create methane gas when it decomposes!”

But was having a box of ugly food delivered to my doorstep every other week doing any good? What about the fuel emissions of the truck that brought it there? I asked Berkenkamp.

The answer, it turned out, is complicated. Farmers typically plow under or compost what we consider ugly food, making these misfit fruits and vegetables more lost revenue than actual food waste, she explained.

But initiatives and start-ups like the one I subscribe to provide markets for farmers and their produce that would otherwise go unsold.

Time will tell whether it will put a dent into the enormous economic and environmental cost of food waste.

“It’s helpful for growers,” Berkenkamp said. “It has also raised awareness among consumers.”

I was proof of that.

• Make a shopping list before you go to the grocery store.

• Look in your fridge and pantry and see what foods you can use up first.

• Make more use of your freezer. Many foods can be frozen if you can’t use them at peak freshness.

• Correctly understand date labels. Just because food has passed its “best if used by” date doesn’t mean it is unsafe. Look at it, smell it, see if it’s OK to eat.

2. For the potatoes: Fill a medium-sized pot with cold water. Peel the potatoes, cut into bite-sized pieces. Add to water-filled pot as you cut.

3. Bring to a boil, then reduce to a simmer and cook just until slightly tender, about 10 minutes.

5. For the sauce: Add pluots, onion, garlic, sugar and water to a small sauce pan and cook over low-medium heat until pluots are becoming softer and everything is blended, about 10 to 15 minutes.

6. Add the wine and chile paste and continue to cook over low heat until it thickens and reduces by about 1/4, about 15 minutes. Set aside.

7. For the pork: Place tenderloin on a clean, dry work surface and season with salt and pepper. Wrap pork with bacon one strip at a time, working diagonally, so everything is covered evenly.

8. Place a cast-iron skillet over high heat. Once it's hot, add the bacon-wrapped tenderloin. You should hear a sizzle. Turn it carefully as you brown each side.

9. Once all sides are browned (which should only take a few minutes), turn off and add potatoes to both sides of pork. Drizzle the potatoes with olive oil.

10. Season the potatoes generously with salt and pepper and toss.

11. Place the skillet in the oven and cook just until the pork has an internal temperature of 145 degrees and potatoes are golden brown, about 15 minutes. About halfway through the cooking time, turn the pork over and toss the potatoes.

12. Let pork rest for at least 7 minutes before slicing.

13. Serve with potatoes and add sauce to pork.

Add all ingredients to a food processor and blend.