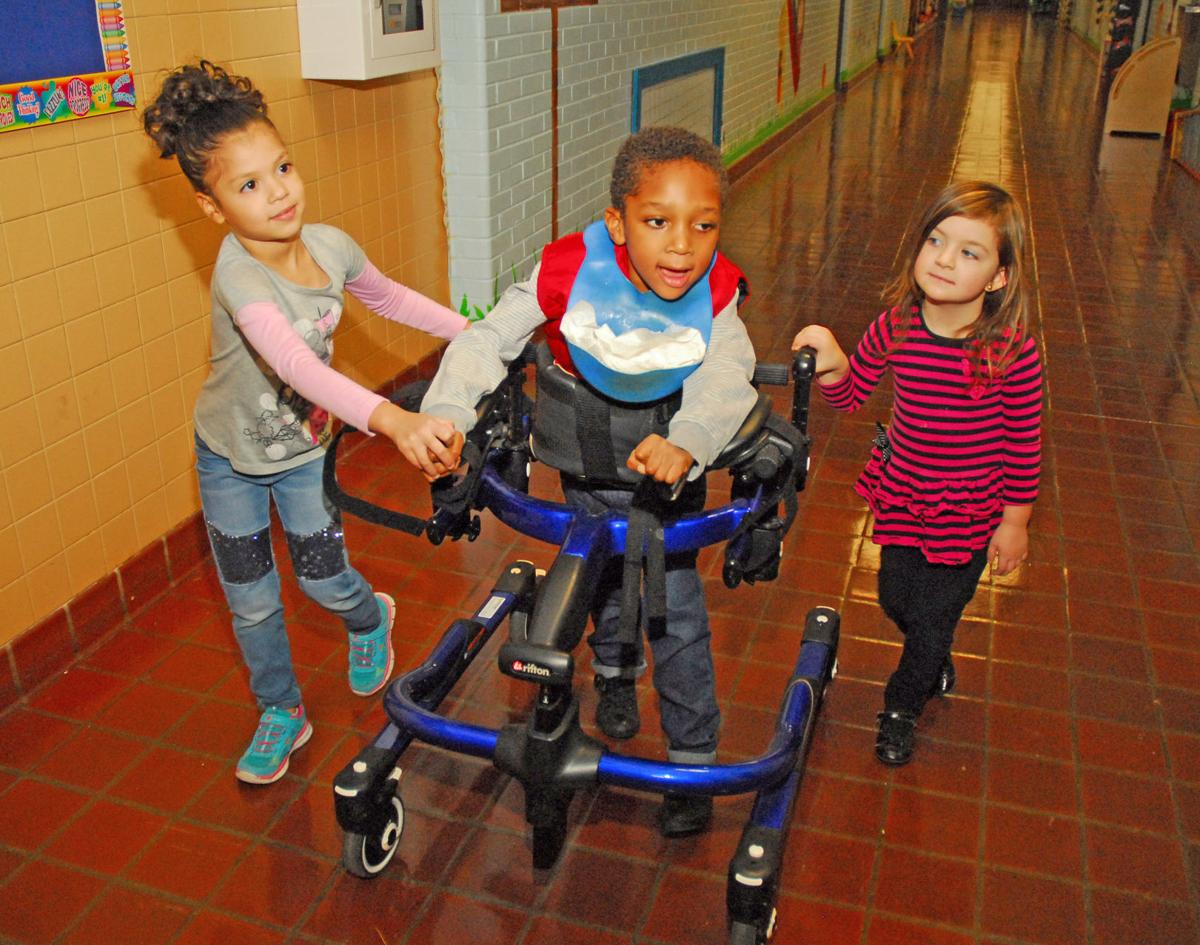 Caleb Johnson is often the center of his classmates’ attention at King George County Preschool, but no one sticks closer than Aly Fulmore and Brynlee Sisk. He just turned 6 and has a rare nervous-system disorder, Batten disease. 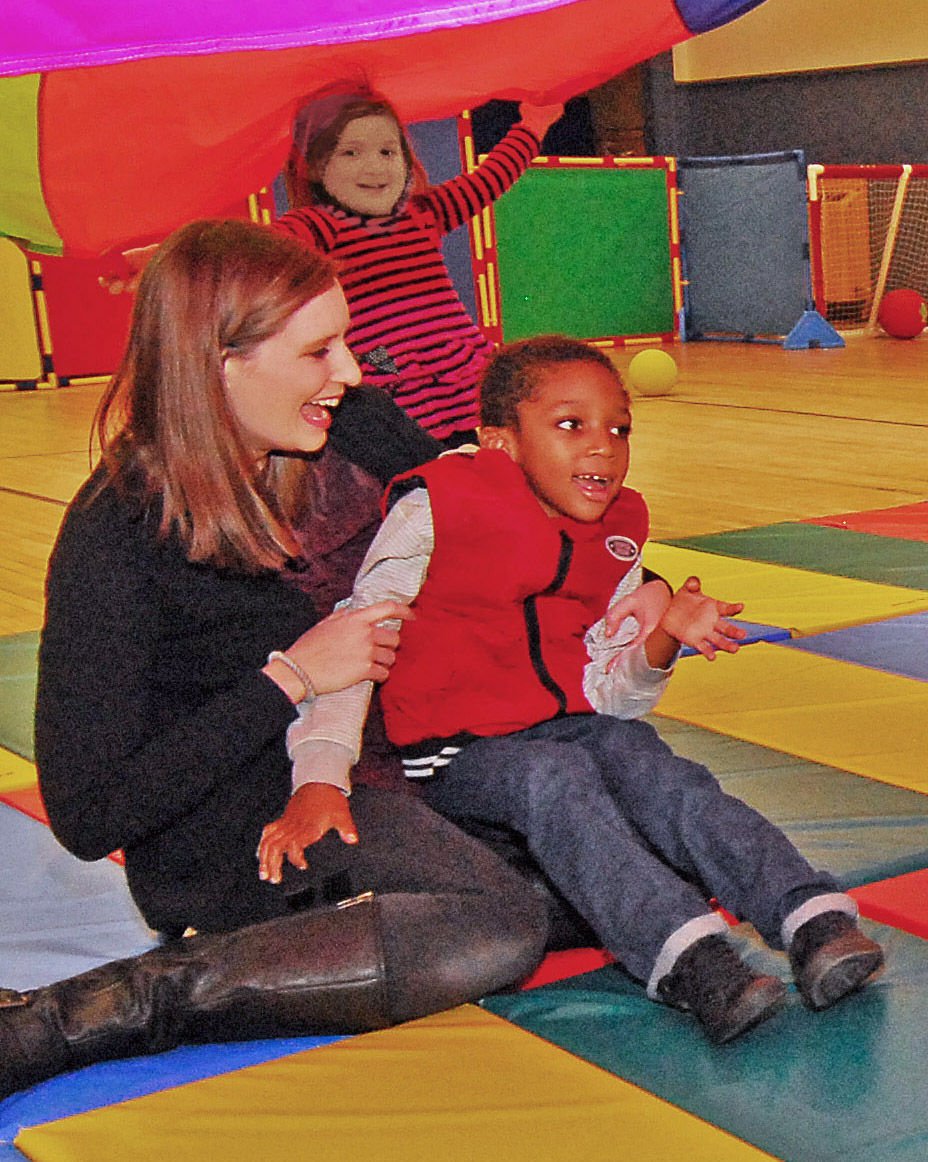 Preschool teacher Jessy Bryant helps Caleb under a parachute as his classmates raise and lower it. 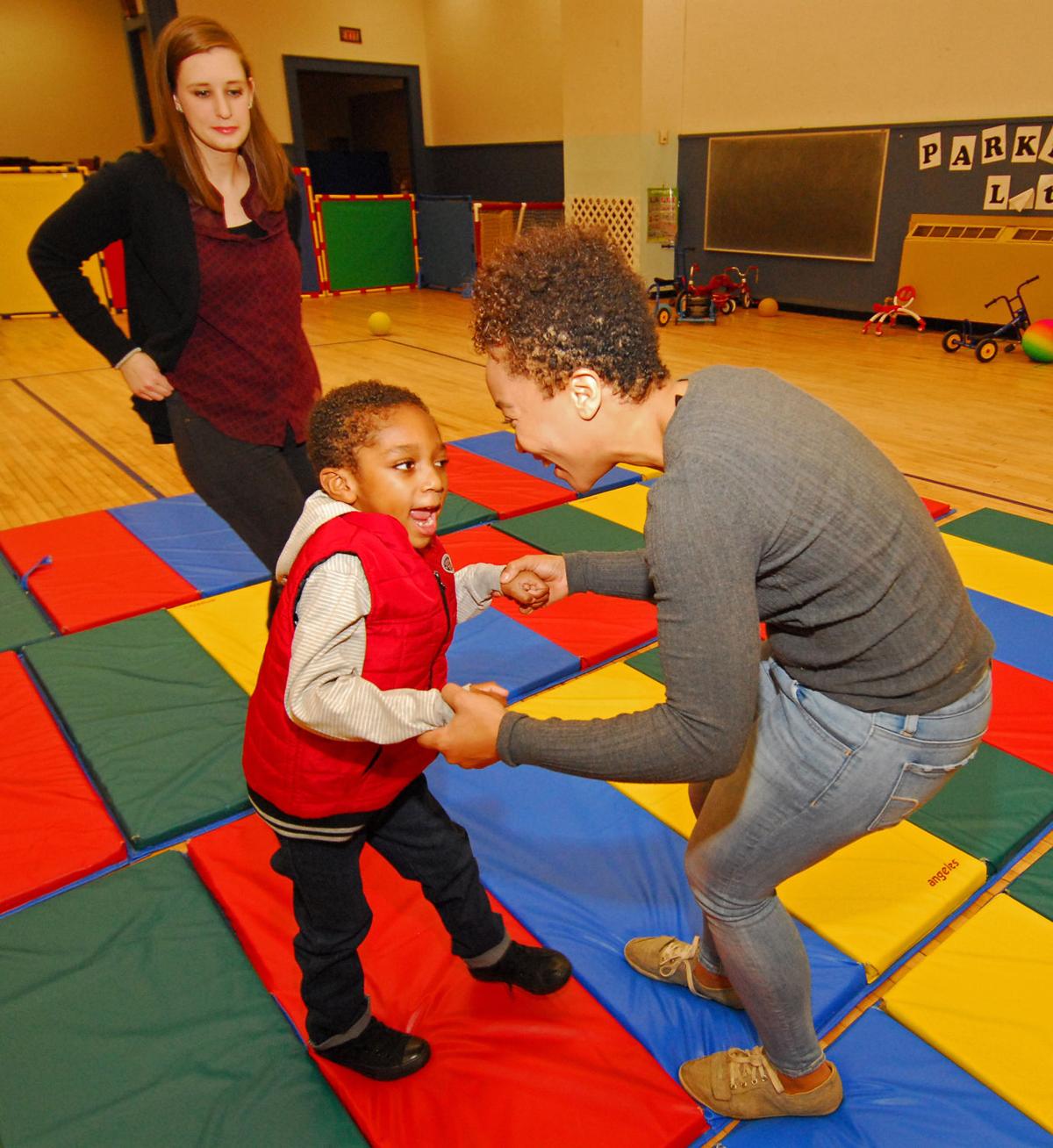 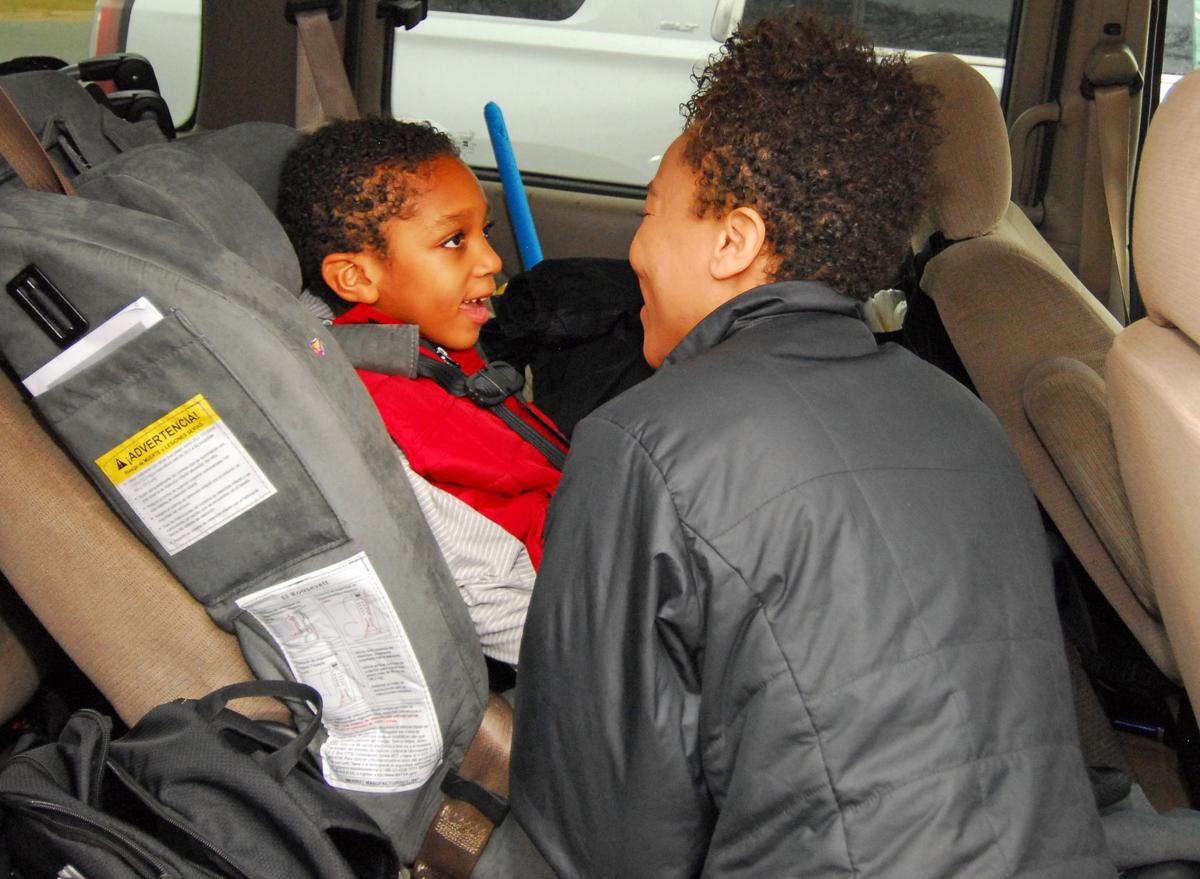 Ashley Johnson does what she can to keep a smile on her son’s face, even as his conditions worsen. She’s working to raise funds for a clinical trial to help him.

Caleb Johnson is often the center of his classmates’ attention at King George County Preschool, but no one sticks closer than Aly Fulmore and Brynlee Sisk. He just turned 6 and has a rare nervous-system disorder, Batten disease.

Preschool teacher Jessy Bryant helps Caleb under a parachute as his classmates raise and lower it.

Ashley Johnson does what she can to keep a smile on her son’s face, even as his conditions worsen. She’s working to raise funds for a clinical trial to help him.

As Caleb Johnson headed back to class from gym, fellow students gathered around his walker, their little hands eager to reach out and help the boy who’s become the darling of the King George County Preschool.

All of a sudden, the youngsters started chanting his name. Their chorus morphed into the tone and tempo of something kids their age like to mimic: the chirping insects or ribbiting of frogs.

Teacher Jessy Bryant wasn’t surprised. For the last two school years, she’s watched other children scramble for the chance to sit by Caleb at circle time.

“The kids really want to interact with him,” she said, “and Caleb gives us way more than we could ever give to him. He’s a blessing to us. We can’t imagine our classroom without him.”

No one wants to think about an empty seat at the table.

But like Tiny Tim in “A Christmas Carol,” Caleb’s future is uncertain. He just turned 6 and has a rare genetic disease that claims most of its young patients between ages 8 and 12.

Caleb has Batten disease, a nervous-system disorder that has no cure. There are eight genes linked to various forms of Batten, and Caleb has what’s known as CLN8. It causes progressive epilepsy, blindness and mental disability, according to the National Institute of Neurological Disorders and Stroke.

Caleb’s mother, Ashley, and her boyfriend, Travis Holman, have joined with two other families nationwide to raise money for a clinical trial that would use gene therapy to treat the disease. Researchers typically use a virus to carry genetic material to the cells, and the virus replaces the missing or malfunctioning gene.

A drug company is working with researchers on gene therapy for Batten patients with two other identified genes, CLN1 and CLN3. The research takes time; one doctor profiled on the Batten Disease Support and Research Association website has studied the disorder for 20 years.

And it’s expensive. Johnson and Holman estimate it will cost almost $4 million to provide needed funding for a clinical trial that would help Caleb and other CLN8 sufferers.

The King George couple has set their fundraising goal at $2 million. Those who know the family believe it’s reachable.

“When it’s your child, anything is possible,” said April Rose, a King George photographer who met Caleb when his mother sought a video for Caleb’s website.

Rose was so touched by the family, she put together the video—it’s a tearjerker—and provided photos for no charge.

“They love their son so much,” Rose said. “And I know if they just keep at it, it’s limitless what they can do.”

Ashley Johnson is a native of King George and was “completely terrified” as a new mom and single mother, but said “Caleb made it really easy.”

He hit all his milestones in the formative years, and videos show an ever-smiling tyke pushing a mop around the kitchen, tossing a football or riding his Hot Wheels.

Things changed after his second birthday, when his language skills hit a plateau. He became hyper-focused on objects, and when he did speak, his words were “scripted,” she said, as he’d repeat lines from TV shows or ads.

When he was diagnosed with autism at age 3, she and Holman, who dated at King George High School and had become a couple again by that point, thought it made sense, given his symptoms.

They started occupational and speech therapy and enrolled him in preschool. They tried all the early interventions they could, hoping he might once again make progress.

Then the seizures started.

At first, Caleb would just “zone out” or drop his head slightly. The episodes worsened, and “the more seizures he had, the worse his cognitive skills were getting,” his mother said.

Doctors diagnosed epilepsy and prescribed anti-seizure drugs. Caleb suffered lots of falls and cuts because of the seizures or being drowsy from the medicine.

During one hospital visit, MRIs showed some unusual brain activity, and doctors suggested genetic testing. Johnson learned that she and Caleb’s father, who lives out of state, both carry the gene that causes Batten. She learned the disease also causes blindness in its downward spiral.

“We’ve done everything we can to prevent him losing his skills,” she said. “It’s pretty heartbreaking to know it’s just going to get worse.”

Michelle Tritt is a speech therapist at the King George preschool, and like other staff members, she’s watched the Johnsons go from one diagnosis to another until they got the dreadful news three months ago.

There’s been a lot of tears shed, said Bryant, his teacher.

Like Johnson and Holman, the staff at the preschool focuses on Caleb’s positive outlook and the joy he brings to others.

“Caleb certainly is an inspiring kid,” Tritt said. “He doesn’t give up. We put him through a lot of things to get him to interact and to engage him and he always tries. He tries very hard.”

His classmates seem to recognize it. His top two fans are Aly Fulmore and Brynlee Sisk, mother hens who are at his side constantly to help him throw a ball in gym or escort him down the hallways.

Caleb can speak only a few words, although his mother is certain he acknowledges what’s being said to him. He comes alive during music, gesturing and bouncing in his chair as the tunes play.

Roya Falkenstein, a long-term substitute in the class, said the other kids feed off Caleb’s enthusiasm.

“He gets excited, and they’ll say, ‘Oh, Caleb is such a party animal. He’s so much fun,’ ” Falkenstein said. “All the kids love him, he’s always the popular one.”

Caleb’s mother is a regular presence in the preschool, and she’s been receptive to whatever therapies or suggestions the staff has made, Tritt said. Like the students, it seems adults practically stand in line to do whatever they can for Caleb.

“He’s surrounded by love, and that’s so important,” Tritt said.

The teacher and mother exchange text messages regularly, even at night, and Bryant has helped Johnson organize fundraisers. In addition to the website, Caleb’s Chance at breakbatten.org, there’s a tree at the King George YMCA decorated with information about the disease, the clinical trial and how to make a donation.

Johnson and Holman both exercise at the YMCA. He’s a parole officer in Warsaw, and she works as a waitress for the flexible hours.

Caleb’s mother also visits his class regularly—and wanted him to stay in preschool even though he’s old enough for kindergarten. She’d rather he be surrounded by familiar people, especially when he started to lose his sight.

During a recent morning there, she watched as Caleb put on headsets for music, Aly and Brynlee ever at his side. The three youngsters laughed as the song played.

Johnson walked over to Dolly Wentz, Caleb’s full-time aide in class, and the two hugged. Both had their eyes set on Caleb as they stood together, arms around each other.

“He’s having a really good day,” the mother said, smiling.

Caleb Johnson gets help walking from his mom, Ashley (left), and Jessy Bryant, his teacher.