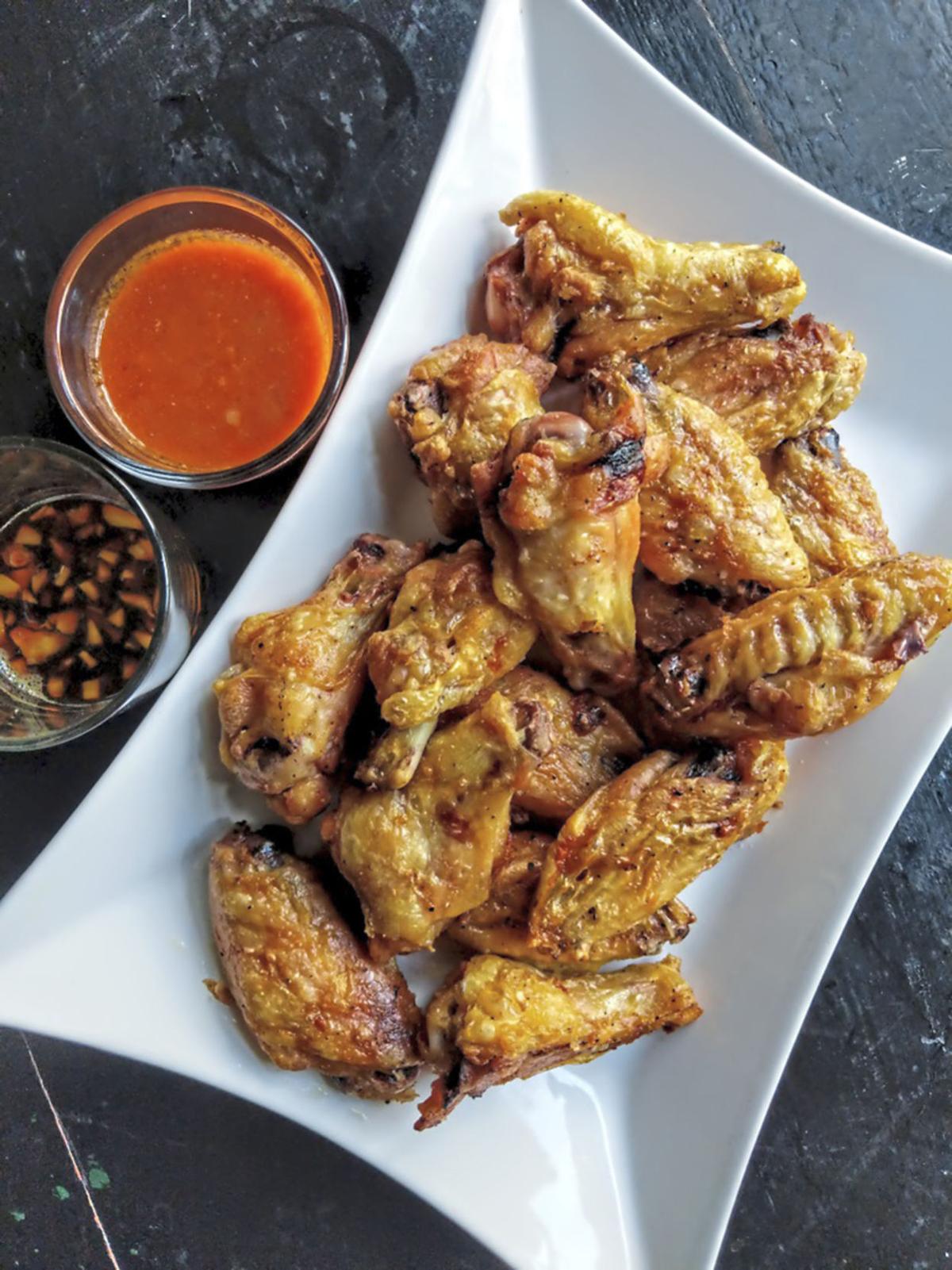 Buffalo and ginger–soy are the perfect sauces to serve with crispy wings. 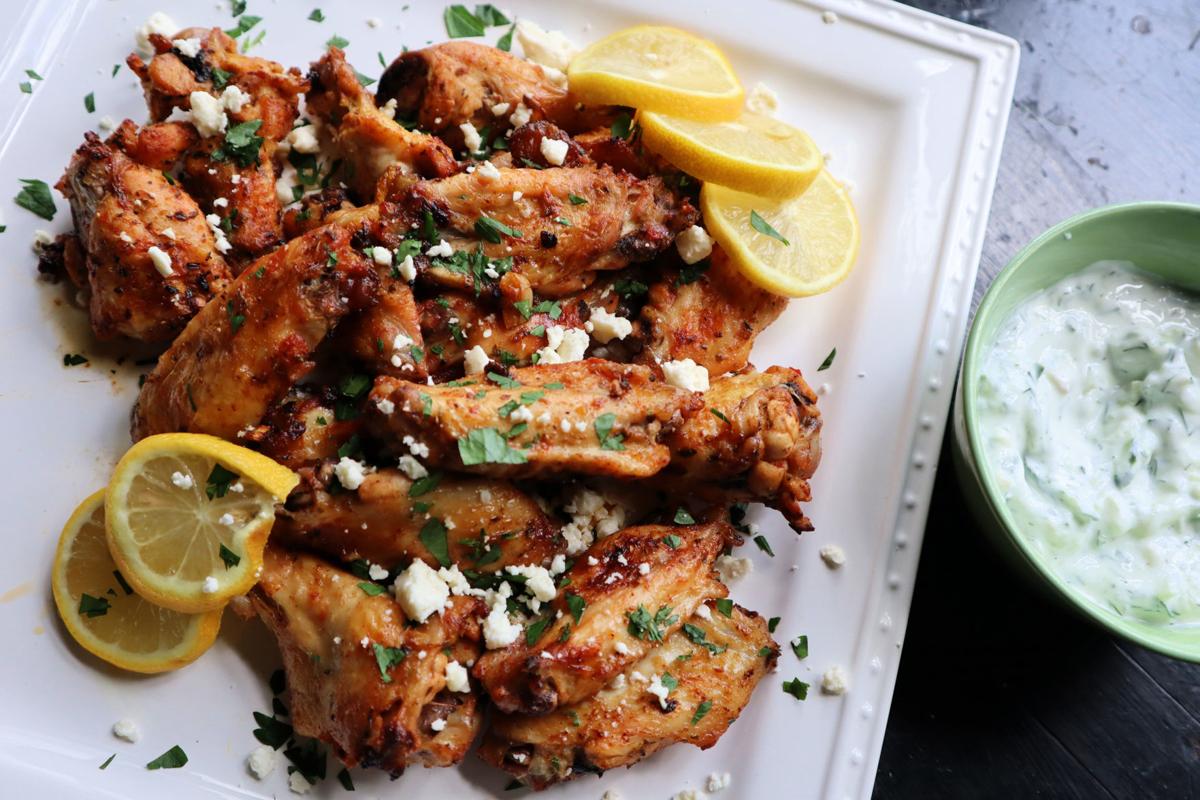 Greek-style wings are marinated in lemon, garlic and oregano and served with crumbled feta and tzatziki sauce. 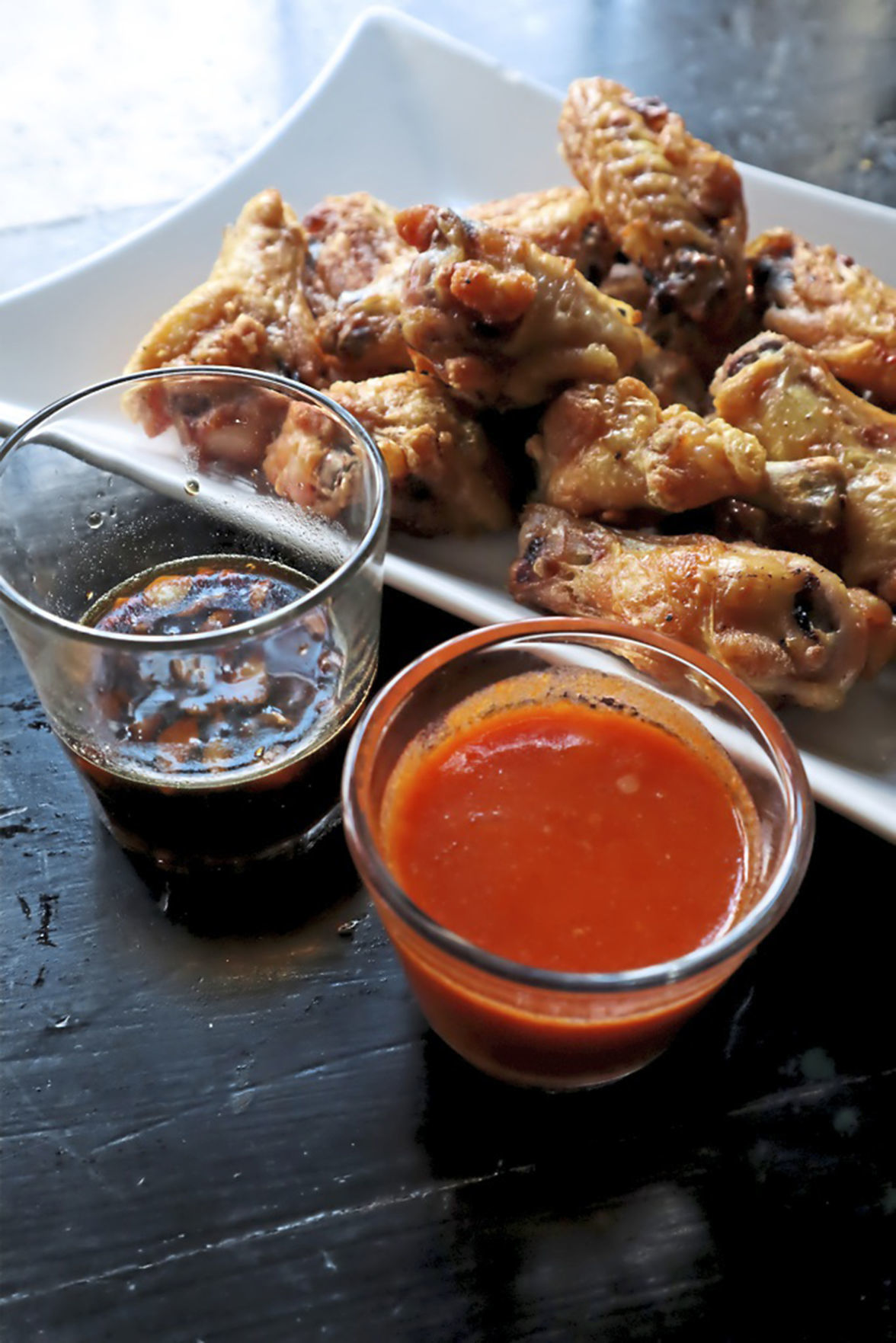 Crispy wings are more fun when served with two sauces, including Buffalo and ginger-soy.

Buffalo and ginger–soy are the perfect sauces to serve with crispy wings.

Greek-style wings are marinated in lemon, garlic and oregano and served with crumbled feta and tzatziki sauce.

Crispy wings are more fun when served with two sauces, including Buffalo and ginger-soy.

A collective cheer probably went up among Buffalo wing lovers when reports came out earlier this month that the coronavirus was giving rise to something quite unexpected—a sudden surplus of chicken wings.

Finally! Some good news in the food world that consumers could really sink their teeth into.

Chicken wings are a staple food during major sporting events like Super Bowl, the NHL playoffs and the March Madness championships. Americans gobbled up some 1.4 billion chicken wings during Super Bowl LIV weekend alone, according to The National Chicken Council, and chicken producers had every reason to believe the finger food would be equally in high demand during the iconic college basketball tournament.

Then the COVID-19 crisis erupted, prompting calls for social distancing and the closing of restaurants. On March 12, the NCAA announced it was canceling the men’s and women’s games.

Seeing the vast majority of chicken wings are sold in mom-and-pop restaurants and bars, the meat industry was immediately overwhelmed with wings it couldn’t sell.

According to Agriculture Department data, poultry producers sold 1.235 million pounds of wings the week the tournament was scheduled to start. The week ending April 3, they sold barely a third of that, just 433,000 pounds.

Not surprisingly, jumbo wing wholesale prices in the Northeast have fallen pretty dramatically, from about $1.75 per pound wholesale in mid-March to just 97 cents last week. That’s less than half the price for the same period in 2019.

This might seem like a win for consumers because all those wings formerly destined for your favorite hangout have to go somewhere, right? Well, not exactly.

Chicken wings bound for foodservice come in large bulk quantities—hundreds of fresh pounds at a time—in 40-pound cases. While producers are being forced to explore alternative channels for sales, including freezing and storing them in cold storage warehouses until the market improves—they’re not really designed for retail, said Russ Whitman, senior vice president at New Jersey-based Urner Barry, a business publisher that provides market information on the food industry.

“They don’t have the Styrofoam packaging” seen in grocery store meat sections or 10-pound bags to vacuum seal them, he said.

Even if they could get a larger supply of fresh wings into grocery stores, they’re just not a big draw for the average consumer. Drumsticks, boneless chicken breasts and rotisserie chickens are currently the big items on many shoppers’ lists, he said. According to the USDA, bagged fryers also are a bright spot of the whole bird sector.

Whether it’s a matter of convenience or the fact it’s a pain (and something of a mess) to pull out the deep fryer, “Wings are just largely consumed outside of the home,” he said.

Bill Fuller, president of Big Burrito Group, which pre-coronavirus sold hundreds of orders of wings in five flavors each week at its Mad Mex restaurants, concurs. Save for sports parties, they’re a protein of last resort. “I don’t know anyone who cooks them at home,” he said.

A few decades ago, no one would have ever stooped so low as to eat chicken wings. Considered scrap meat that sold for pennies a pound, they either were tossed out with the trash or used for soup and stock. Then, the story goes, Anchor Bar in Buffalo, N.Y., came up with the idea to cut their wings in half to produce a “drumette” and a “flat,” deep-fry them and douse them in hot sauce. “Buffalo wings” quickly caught on, and by the 1970s and 80s wings were a popular bar food and appetizer in American restaurants.

And now, when so many people are eating out of their refrigerators and pantries instead of at restaurants? Maybe it’s time to give the humble wing some homestyle love.

One reason home cooks shy away from wings, aside from the mess, is that wings themselves are full of skin and fat. That makes the half-dozen or so it takes to fill you up feel not so much like an actual meal but a guilty cheat. But if you bake instead of fry them, or use the meat to make soup, you can cut the amount of fat and calories in half.

Besides, doesn’t movie night or watching reruns of your favorite sporting event—and admit it, we’re all watching a lot of TV these days—call for something a little more than a bowl of popcorn or chips?

Wings are a little more expensive at the retail level than wholesale, but still very affordable: A 3-pound bag of frozen wings currently costs $10.99 at Giant Eagle, while a value pack of 2 or more pounds of fresh wings is running $2.99 a pound at Target. And they’re extremely versatile when it comes to flavors and accompaniments. Wing sauce made with Frank’s Red Hot is a favorite, but you also can dip the wings in a soy–ginger sauce for an Asian flair. Or go Greek by marinating the wings in lemon, garlic and oregano before roasting and serving them with crumbled feta and lemon slices.

“If they’re made right, they’re definitely worth it,” said Matt Cercone, owner of The Original Big Shot Bob’s House of Wings in Avalon and Kennedy Township. Even with consumers cooking more at home, he’s among the lucky small businesses that have been able to stay open in a food service industry that’s all but shut down.

Wings, he said, are comfort food, and so he’s still preparing thousands of wings a week, as well as experimenting with new flavors. And with wholesale prices down for shops like his, every penny saved helps keep them afloat.

“We’re holding our head above water,” he said.

Notes: You need a really hot oven to make crispy wings without frying. If using frozen wings, make sure they’re completely thawed before baking and also be sure to spread them out in a single layer

Both of these sauces can be made up to 5 days in advance; let cool completely; cover and chill. Rewarm before using.

4. Bake wings until cooked through and skin is crispy, 45 to 50 minutes.

5. Line another rimmed baking sheet with foil; top with a wire rack. Add half of wings to ginger–soy glaze and toss to evenly coat. Place wings in a single layer on prepared rack and bake until glaze is glossy and lightly caramelized, 8 to 10 minutes.

6. Toss remaining half of wings in Buffalo sauce. Serve immediately (no need to bake them).

1. Wash wings and pat dry. Place in a 6- to 8-quart pot and add 10 cups water, along with 1 teaspoon of salt and a good grind of black pepper. Bring to a boil and cook for 5 minutes. Remove from heat and skim off any scum that has appeared on the surface. Cover pan and simmer 1 hour.

2. Remove from heat and take out chicken wings. Set chicken aside to cool completely.

4. Skim fat from top of chicken broth. Stir in onions, celery, carrots and garlic. Taste and adjust seasonings. Place back on medium–low heat.

6. Reduce heat to low. Stir in the cheddar cheese and simmer until it’s melted. Add salt and pepper to taste. Serve hot in warmed bowls with a handful of tortilla chips.

Note: These zesty wings taste like the Greek Isles, with plenty of lemon, oregano and garlic. They’re served with an easy-to-make tzatziki sauce.

1. Make the marinade a couple of hours and up to one day ahead of time. Whisk together the extra-virgin olive oil, lemon juice and zest, garlic, oregano, black pepper, salt and sweet paprika. (Add cayenne pepper only if you want spicy wings.)

2. Add the chicken wings and toss to coat the wings evenly. Cover and refrigerate for a couple of hours or overnight.

4. Spread chicken wings on a large baking sheet and bake for 45 to 50 minutes or until internal temperature registers at least 165 degrees.

5. Move chicken wings to the top rack and broil briefly until the skin turns golden brown and crispy. Remove from heat and let sit 5 minutes or so.

6. Make the tzatziki sauce while chicken wings are baking. Transfer the sauce to a dish and cover the sauce. Refrigerate until ready for use. Give the sauce a little stir just before serving.

7. Transfer chicken wings to a serving bowl or platter. Garnish with feta cheese, lemon slices, and a generous sprinkle of fresh parsley. Serve with the tzatziki sauce.