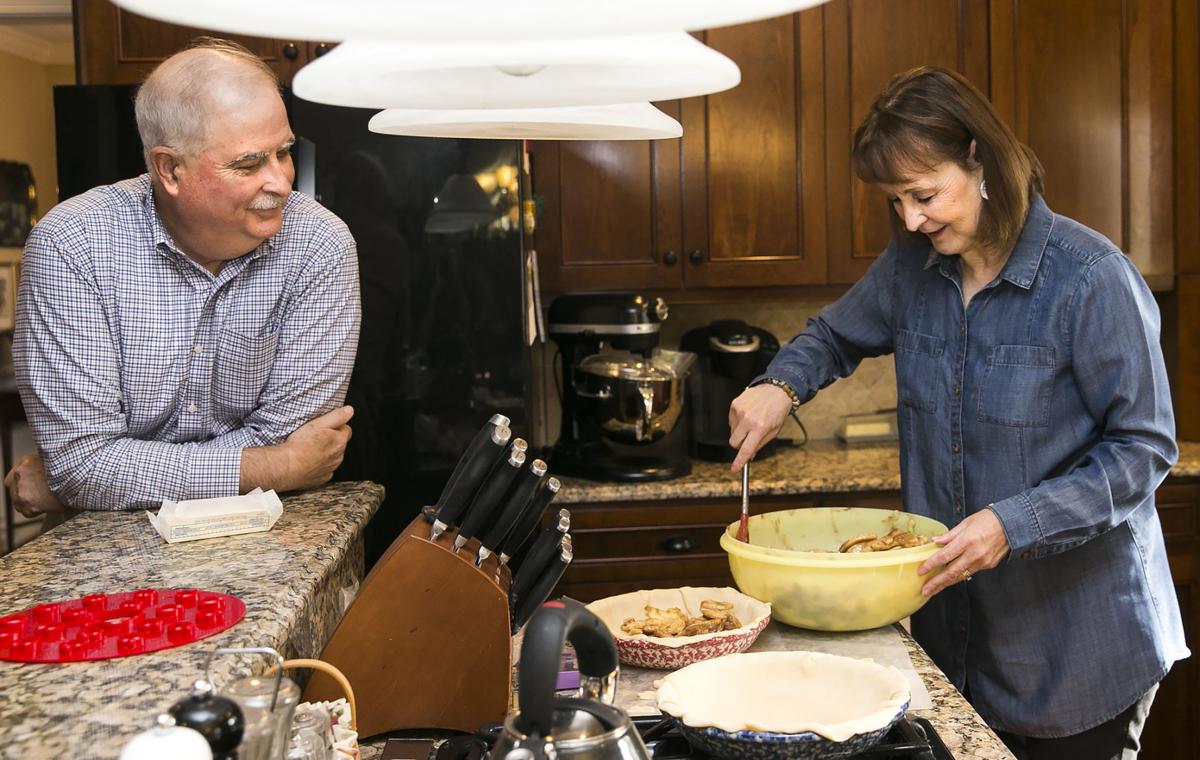 Using a mixing bowl that belonged to her grandmother, Becky Murray fills an apple pie as husband John watches. It’s one of many desserts they will serve for Thanksgiving dinner. 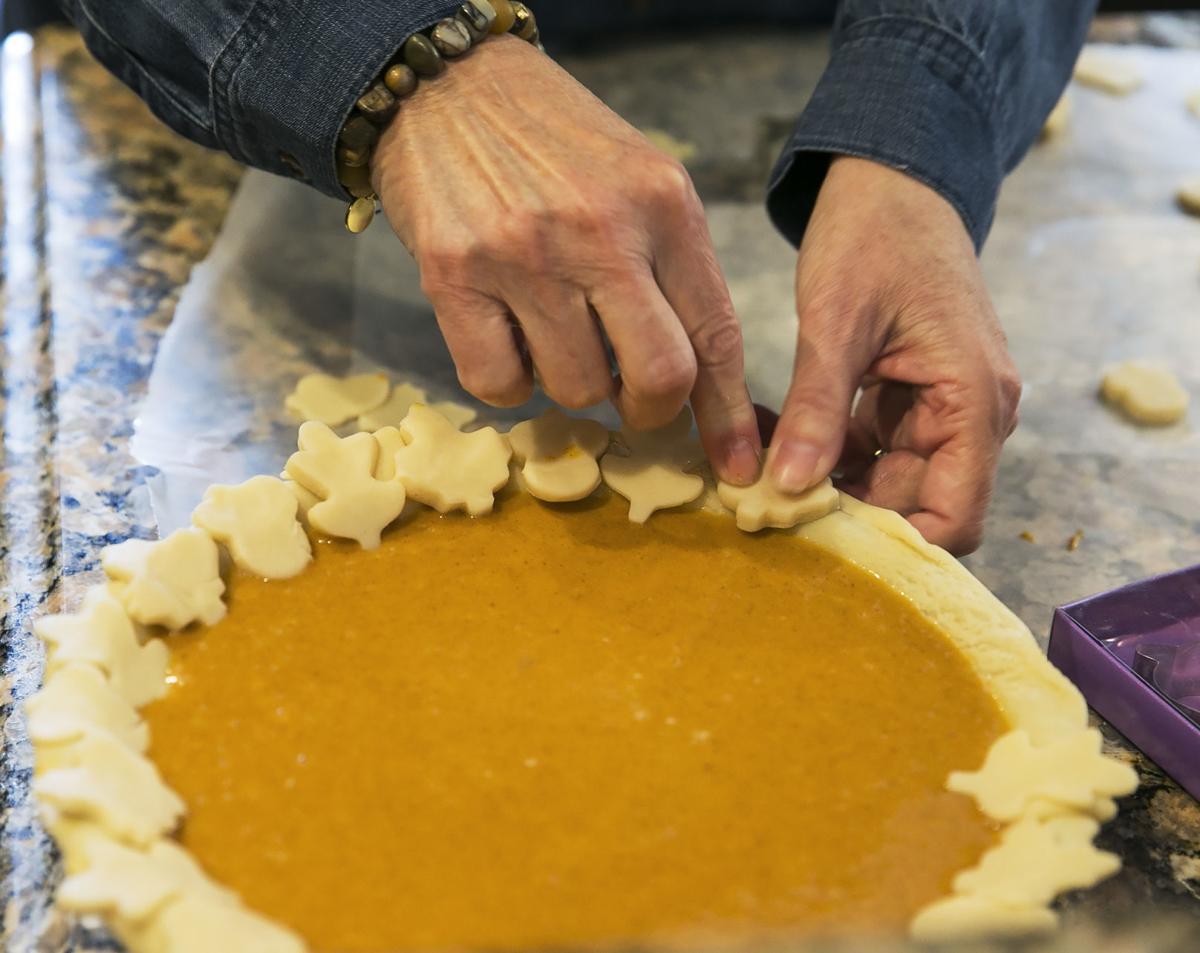 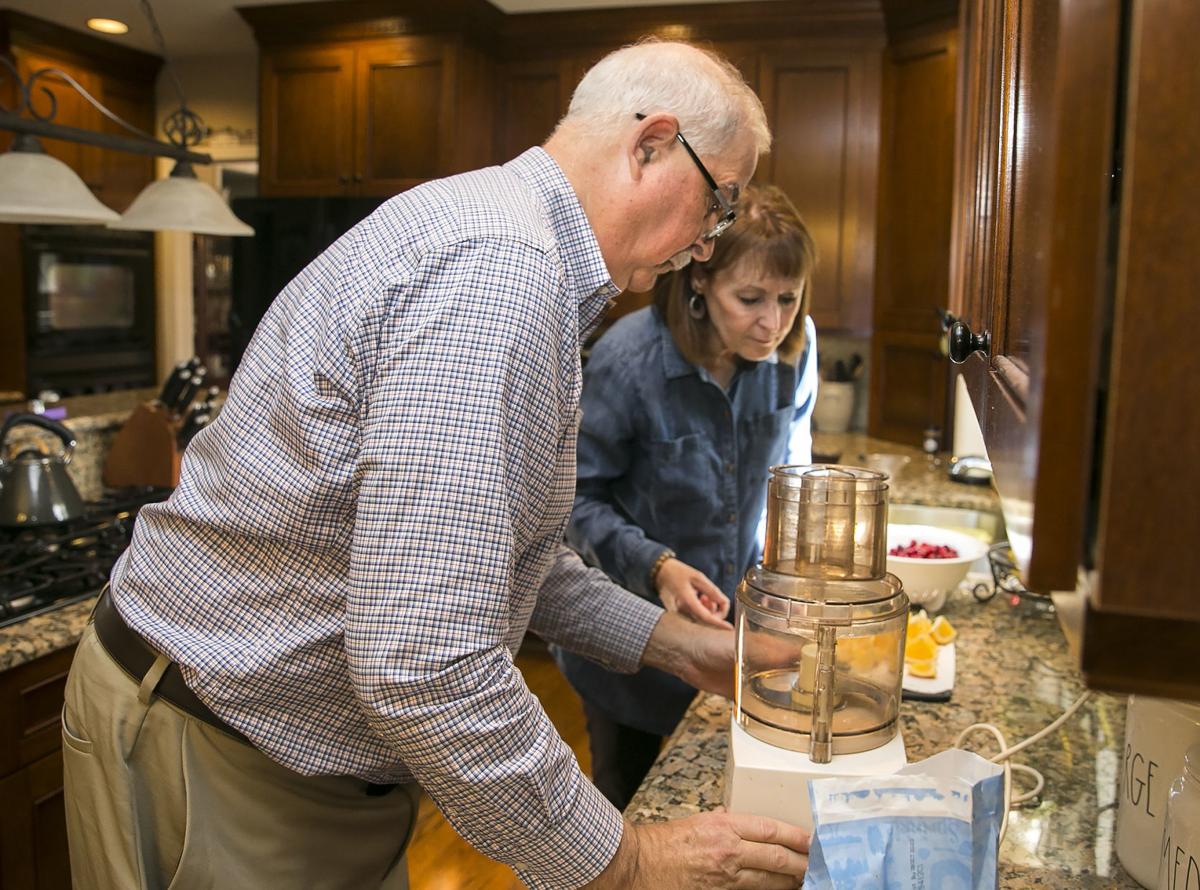 Things don’t always go as planned, and the Murrays grapple with a balky food processor as they prepare cranberry relish.

Using a mixing bowl that belonged to her grandmother, Becky Murray fills an apple pie as husband John watches. It’s one of many desserts they will serve for Thanksgiving dinner.

Things don’t always go as planned, and the Murrays grapple with a balky food processor as they prepare cranberry relish.

Becky Murray may not like to cook any other day of the year, but she and her husband, John, pull out all the stops—along with folding tables, chairs and turkey decorations of every description—for the biggest eating extravaganza of all.

The Spotsylvania County couple has been hosting Thanksgiving dinner for almost 30 years and sometimes has that many people around tables in three rooms. Guests on both sides of the family come from Pennsylvania, New York, North Carolina and all points in between.

“Thanksgiving is my favorite,” she said. “We like having family here.”

The Murrays are continuing a tradition that her grandmother, the late Eugenia Donahoe, started decades ago, when she lived on Brompton Street in Fredericksburg.

People came to the Donahoe boarding house for a hot meal, not a place to sleep, and Eugenia Donahoe’s skills in the kitchen were as talked about as her unusual stuffed peppers. Those gathered around her mahogany table, which Becky Murray inherited, ranged from construction workers putting up new buildings at what was then Mary Washington College to professors who taught there.

“She was a country cook, and she took pride in her cooking,” John Murray said. “She didn’t have recipes, she just put in a little of this or that.”

The Murrays insist their modern-day version pales by comparison. Becky Murray fretted about being featured in the newspaper because their pumpkin pie recipe is right off the back of the Libby’s can, and they don’t make their own crusts.

They buy them frozen, just as they make slice-and-bake chocolate chip cookies for their nephew who seemingly can’t get through the fourth Thursday of November without them.

But don’t let their half-baked notions fool you. The Murrays—he’s a senior vice president at Virginia Partners Bank and she’s a librarian—serve up a feast that’s matched only by the fellowship of those gathered.

“It means the world to me that Becky, bless her heart, picked up the custom” of hosting Thanksgiving, said Ernie Donahoe, the 82-year-old uncle of Becky Murray and son of Eugenia Donahoe.

He and his late wife, Jean, held the gathering at their Stafford County home in the last years of his mother’s life. She died in 1990 at age 91.

Then, the Murrays took over the annual dinner, and the guest list grew to include John Murray’s siblings and their families as well as Ernie Donahoe’s grandchildren and other extended family members.

“It’s just a terrific day,” Donahoe said. “Whether it’s raining or the sun is shining, it’s all sunshine inside the house.”

People have offered to bring a dish or help with the cooking, but the Murrays insist on being the sole Betty Crockers.

“I’m shamed by my friends because I don’t bring anything,” said Sarah Murray, John Murray’s sister-in-law who lives in Hendersonville, N.C. “We offer, and even if I do, they put it off to the side because they have this whole little menu. Everybody looks forward to the same thing: the stuffed peppers.”

Eugenia Donahoe stuffed hers with chopped ham and bread crumbs, diced onion, cooked tomatoes and Velveeta cheese, and it took the Murrays some time to get the concoction the way grandma used to make.

“To this day, it’s still one of the best things in the world to eat,” Donahoe said, recalling memories of Thanksgiving dinner that go all the back to World War II.

The Murray’s “little menu” for 28 diners includes a 27-pound turkey, ham and those prominent peppers. Side dishes include mashed potatoes and gravy, corn pudding and sweet potatoes with pineapple, baked apples and broccoli casserole, stuffing and squash casserole, deviled eggs and cranberry relish.

For dessert, there are pies (pumpkin, apple and chocolate), a Funfetti cake, chocolate chip cookies and ice cream.

Becky Murray added hors d’oeuvres a few years ago in an attempt to get everyone out of the kitchen during the last-minute crunch. This year, she’s serving a new recipe—crab dip—along with veggies, crackers and cheese.

“These days, everybody arrives on Thanksgiving and they all want to congregate in the kitchen,” she said, “which isn’t the best idea, because that’s where all the action is.”

Becky Murray says she does more directing in the kitchen than cooking, and her husband insists that he’s just the hired help. Both are slightly exaggerating, although it’s clear that he cheerfully follows her lead. Most of the time.

“I do get grumpy, Becky, don’t I?” he asked playfully.

“Sometimes you do,” she said, smirking. “Fortunately, I always maintain my poise.”

Unless flour becomes part of the equation. She’s definitely got an aversion to it, mostly because of the tracks it leaves.

“I like the idea of cooking, but it’s a mess, and I like for things to be the right way,” she said.

That became obvious as she cut out pastry pieces shaped like leaves and acorns. She lines the edges of pumpkin pies with the snippets to give the illusion, as she described, that she knows what she’s doing.

On Tuesday, she arranged them in precise fashion: oak leaf, maple leaf, acorn.

“I do not like them to be mismatched,” she said. “If I get to the end and don’t have the right pattern, that really gets my [obsessive compulsive disorder] going.”

He waited, maybe not so patiently, for her to finish so he could put the pies in the oven and move on to the next task.

When she fretted again about pastry patterns, he said: “Nobody’s gonna notice.”

He’s probably right. Their guests will be too stuffed from those popular peppers to see straight.

TIPS FROM THE MURRAYS

Becky and John Murray do as much of the Thanksgiving preparation ahead of time as possible. For instance, they make Chex Mix the weekend before, bake desserts on Tuesday, then ham and casseroles on Wednesday, then cook the turkey and remainder of dishes on Thursday.

To avoid the last-minute mess involved with mashed potatoes, he makes them a few hours before the meal and keeps them warm in a Crockpot.

The Murrays prepare their menu in early November, and he starts shopping for items by Veterans Day. The dining room table is set, along with folding tables in two other rooms, well before the cooking starts. Housecleaning is done ahead of time, too, and it's much easier now that both their daughters are grown and out of the house.

Those who stay over—and every spare bedroom in the house usually is occupied on Thanksgiving night—enjoy leftovers as long as they last. Per Murray tradition, he eats pumpkin pie for breakfast, and she has apple pie. Then, the  men go golfing and the women relax or shop.

There are only two rules in the Murray home regarding the holiday. No one can watch football while eating, and anyone who brings up politics has to wash the dishes.