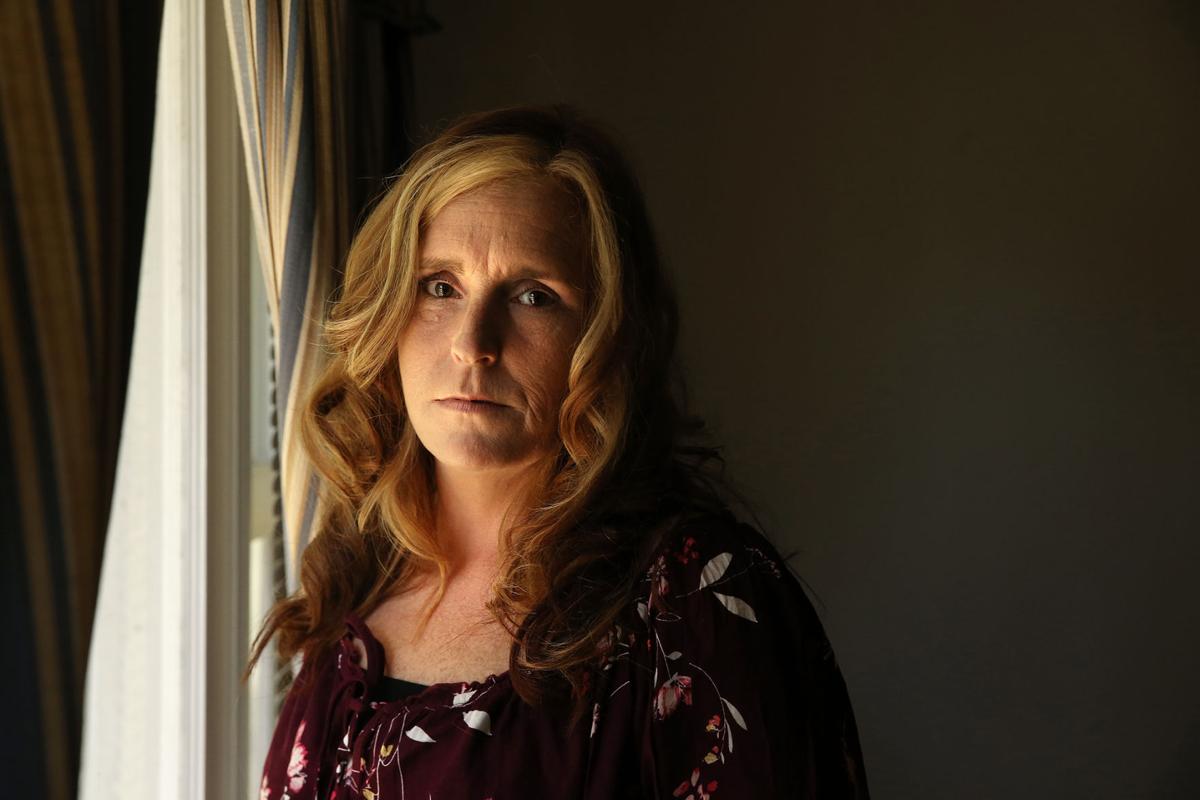 Lisa Sullivan’s daughter Katelin Akens disappeared in 2015 after failing to board a flight at Reagan National Airport. 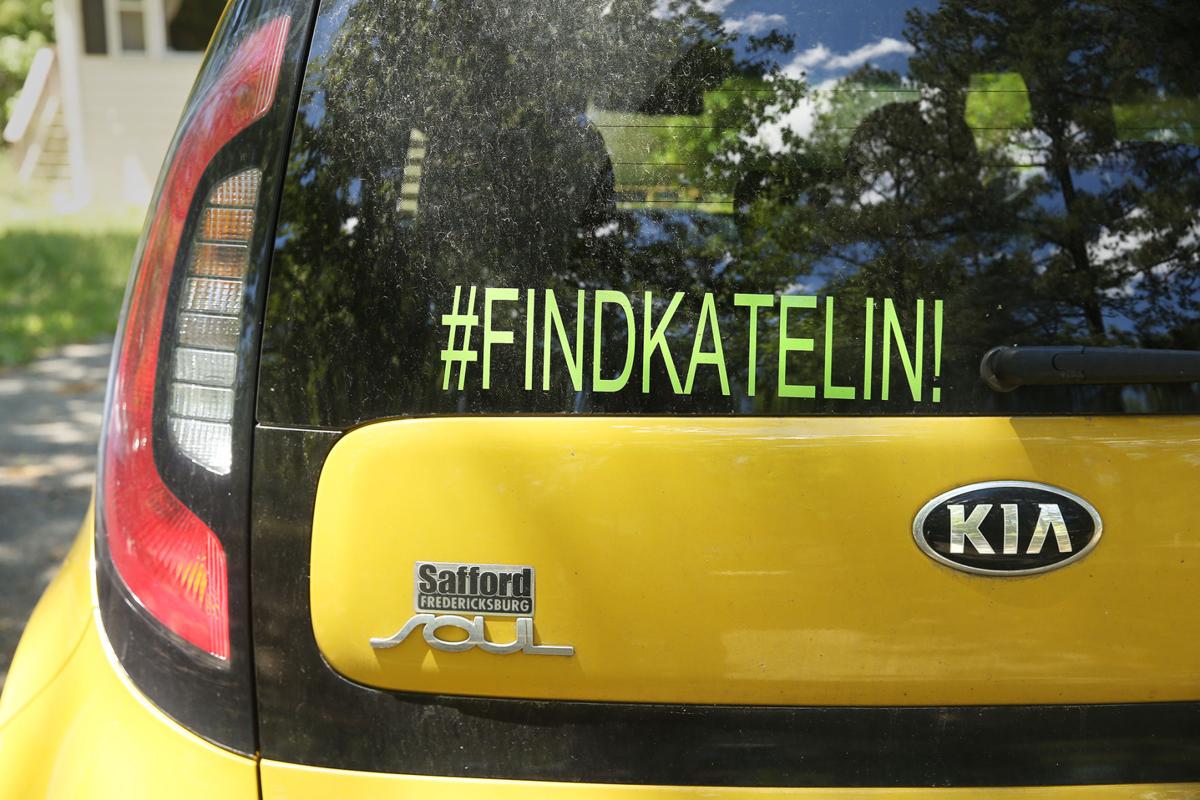 Lisa Sullivan highlights the 2015 disappearance of her daughter, Katelin Akens, with a decal. Friends and family also display it. 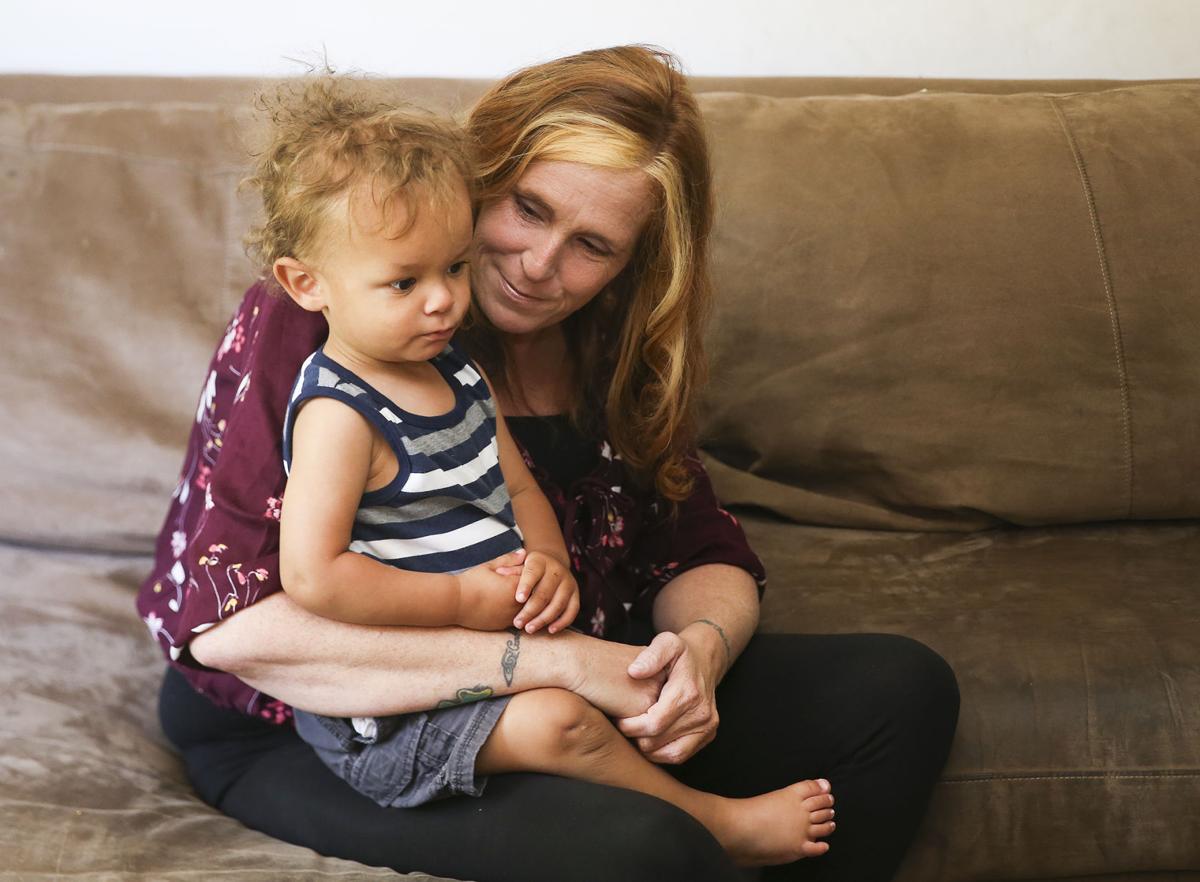 Lisa Sullivan holds her 17-month-old grandson, Landon Akens, at home in Ruther Glen. Her daughter and the baby’s aunt, Katelin Akens, is missing. 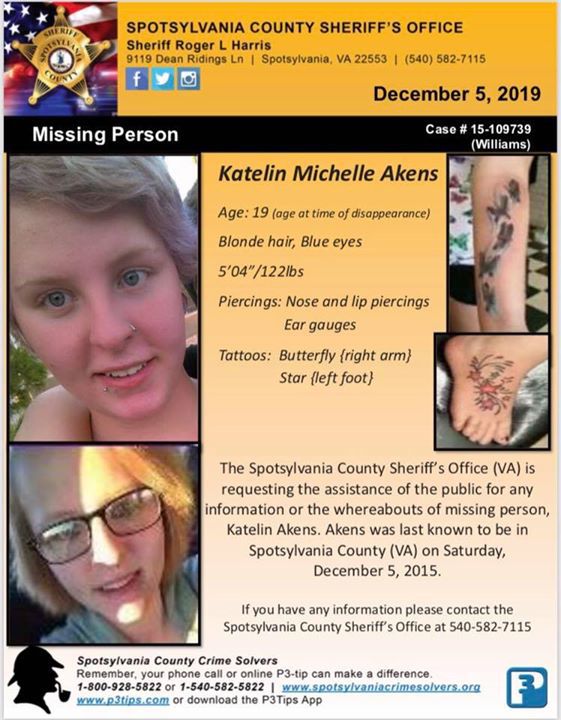 Lisa Sullivan’s daughter Katelin Akens disappeared in 2015 after failing to board a flight at Reagan National Airport.

Lisa Sullivan highlights the 2015 disappearance of her daughter, Katelin Akens, with a decal. Friends and family also display it.

Lisa Sullivan holds her 17-month-old grandson, Landon Akens, at home in Ruther Glen. Her daughter and the baby’s aunt, Katelin Akens, is missing.

Katelin Akens disappeared on Saturday, December 5, 2015 on her way to catch a flight back to Lake Havasu City, Ariz., where she lived with her fiancée. Today, on the fourth anniversary of her disappearance, the Spotsylvania Sheriff's Department  again asked for the public's assistance in finding her. Below is a story we published about renewed attention for Aken's disappearence back in 2017.

Lisa Sullivan trembled at the sight of the Spotsylvania County deputy— afraid of the news he might deliver.

But the deputy, standing next to a man in plain clothes, simply handed her a flier for an autism awareness event hosted by the Sheriff’s Office. He was distributing the printouts at Ollie’s Bargain Outlet, where Sullivan is a manager.

“You really scared me,” Sullivan, 39, recalled telling the deputy in March. “I thought it was about my daughter, Katelin.”

The deputy gave her a hug.

Sullivan’s thoughts often drift back to Dec. 5, 2015, when her daughter, Katelin Akens, disappeared at age 19. It is all the family can seem to talk about. The Sheriff’s Office and FBI continue to investigate the disappearance, but the case appears to be at a standstill.

“We analyze everything … all the time,” said Sullivan’s sister, Pamela Rogowski, 39, who lives in Spotsylvania. “Different things that could’ve happened. Every day.”

Sullivan checks her Facebook page for posts about her daughter as soon as she wakes up in the morning.

She searches her firstborn child’s name on Google at least once a week.

She watches TV as a form of escape, but some of her favorite shows—“NCIS” and “Criminal Minds”—remind her of the real-life case.

She used to talk with a detective every day, but that got depressing. Nothing ever changed.

Now, she texts the lead detective maybe once a week.

In a text to the investigator on the morning of April 20, she asked: “Hey how are things going? Anything new?”

No new developments, the detective replied.

Sullivan has reached out to national TV shows. She even tried contacting a celebrity psychic, to no avail.

Sullivan wondered what else can she do.

“Instead of being quiet all the time, something needs to be done,” she said.

Lately, she has been spreading word about a TV show about her daughter’s case. It’s scheduled to air this Sunday at 9 p.m. on the Investigation Discovery channel. A summary of the episode of “Disappeared” states: “On route to the airport, nineteen-year-old Katelin Akens makes an unexpected stop at a Virginia shopping mall … and vanishes. Police investigate her loved ones at length and start to suspect that someone close to Katelin may know more than they’re saying.”

Katelin Akens lived with her mom in Caroline County until September 2014, when she moved to Lake Havasu City, Ariz., with her fiancée.

She returned to the Fredericksburg area shortly after the birth of her nephew, flying in on Dec. 1 for what was supposed to be a four-night stay.

On the morning of her scheduled flight back to Arizona, Akens made sure to take her high school diploma, Sullivan recalled. She took pride in that degree and needed it to enroll in cosmetology school in Arizona.

Mom and daughter left Sullivan’s home about 8:30 a.m., en route to Akens’ former stepfather’s house in Partlow. The stepfather, whom Sullivan divorced a few years ago, had agreed to take Akens to the airport.

Everything seemed normal when they arrived at the stepfather’s home, Sullivan said. Akens held her diploma as she and her ex-stepdad talked about her plans for cosmetology school.

Sullivan, who had to be at work by 10 a.m., told Akens to call her—first when she got to Reagan National Airport, then again when she boarded the plane. Akens said she would.

Several hours later, Sullivan said she received a text from the stepfather saying he had dropped Akens off.

“OK thank you,” Sullivan texted back. “How was traffic?”

“Not bad,” the stepfather replied.

Eight minutes later, she received a text from her daughter: “I’m at the airport. Battery dying, so won’t be able to text for a bit.”

“OK let me know when you get on the plane,” Sullivan replied.

Akens was supposed to be in the air when Sullivan received two texts from her daughter’s number at 7:15 that evening.

“Staying with a friend,” the first text read.

“I need some time alone,” stated the second.

Sullivan, who was driving home from work at the time, pulled into the Flying J parking lot in Carmel Church and tried reaching her daughter. The call went straight to voicemail.

“Call me,” Sullivan then texted.

“I’m very worried about you.”

Sullivan saved those final two texts from her daughter’s number. Sullivan insisted that Akens never texted back-to-back messages unless she misspelled a word.

“That’s not her text,” Sullivan said.

WHEN SHE WAS HERE

Growing up, Akens wanted to be a Head Start teacher, having attended the federal program for low-income preschoolers when she was 4, her mom said.

“She liked babies,” Sullivan said. “Kids always liked being with her.”

Akens had frizzy blonde hair that she would tame with a straightener. If she went to bed with wet hair, she’d wake up looking like a Troll doll, her mom said with a laugh. “I slept good last night!” Akens would say if Sullivan made a joke about her hair.

When Akens was in elementary and middle school, Sullivan said she spent hours braiding her hair or styling it with small rubber bands. Akens and her younger sister, Gabi, now 17, loved it when their mom did their hair.

Sullivan affectionately describes her daughter as a “very natural blonde” who could be clumsy at times. One time, she walked smack into a large satellite dish in the yard.

She and her mom worked at the same local Wawa for more than a year. Sullivan was the night-shift manager and Akens usually got in around 2 or 3 p.m. to work in the deli or behind the cash register.

“The person that hired her remembers Katelin when she was little,” Sullivan said. “She goes, ‘I can’t believe I’m hiring you.’ ”

Akens moved to Arizona about 10 days after her 18th birthday, her mom said.

Akens never got on the flight back to Arizona and nobody has seen her since, at least as far as police know. A suitcase with her plane ticket, credit card and other items was found two days after her disappearance in a drainage ditch off River Road, near Motts Run Reservoir in Spotsylvania.

Initially, the Sheriff’s Office reported that Akens had been dropped off at the Springfield Town Center and was supposed to take the Metro to the airport. Authorities attributed that information to the stepfather.

Sheriff’s spokesman Charles Carey said recently that authorities interviewed the stepfather and everyone else who knew Akens. But he did not classify any of them as suspects or people of interest.

The stepfather did not return a call for comment.

“It’s an ongoing investigation. On face value, that’s pretty much all it is,” Carey said.

Asked about the promo for “Disappeared” that claims police think someone close to Akens may be withholding information, Carey replied via email:”That hasn’t come from us, sheer speculation.”

Sullivan said she still holds out hope that her daughter will be found. Until then, she is in the same situation—speculating.

“We don’t know if she’s laying in a ditch somewhere or if she’s going to be fine.” —Lisa Sullivan

Gabi Akens held her toddler son, Landon, tight as they leaned over her sister Katelin Akens’…