Coronavirus update: As many as 63 US cases suspected as disease also spreads to Europe

An architectural rendering shows the plan for the Culpeper Career & Technical Education Facility and how its main entrance is likely to appear. The new CTE Center will be built over the next year on a plot of land located adjacent to the Germanna Daniel Technology Center.

A rendering of the new Culpeper CTE School demonstrates how solar panels could be utilized to supplement needed power. 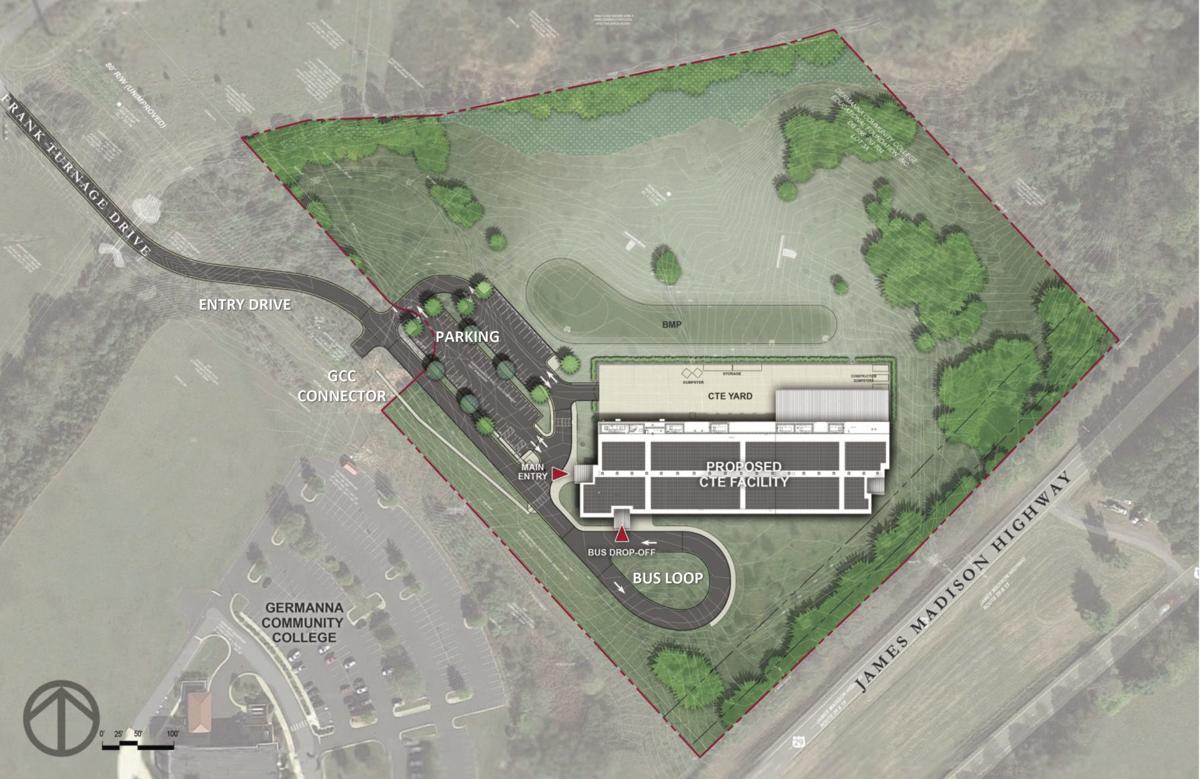 The Culpeper Career & Technical Education Facility will be built behind the Germanna Daniel Technology Center with access off of McDevitt Drive via Frank Turnage Drive, top left. 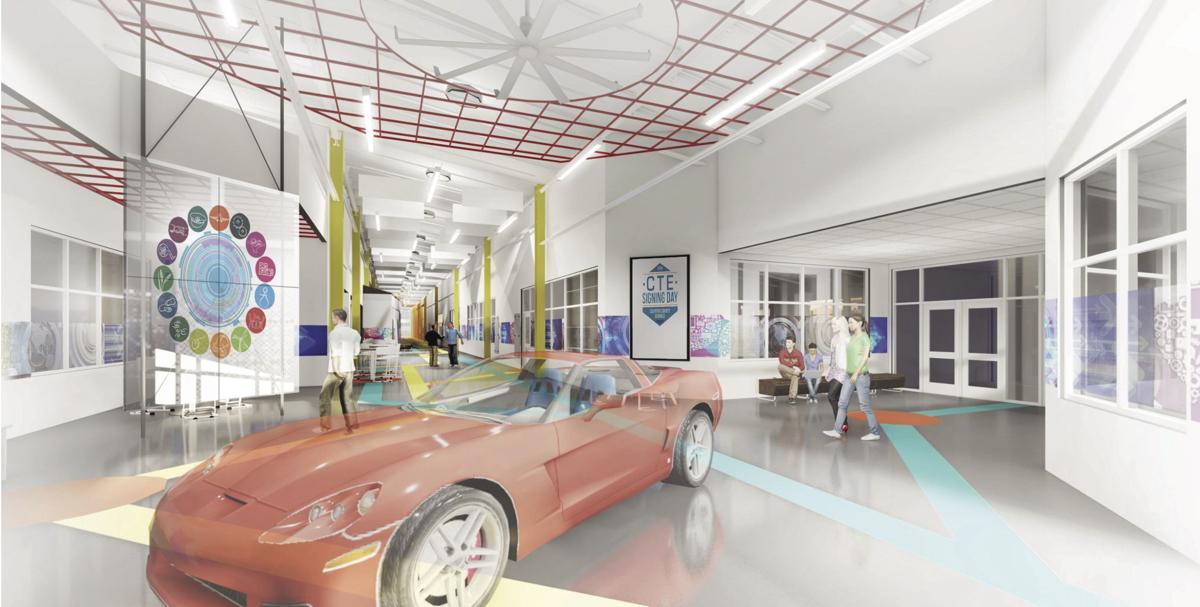 An architectural rendering shows the plan for the Culpeper Career & Technical Education Facility and how its main entrance is likely to appear. The new CTE Center will be built over the next year on a plot of land located adjacent to the Germanna Daniel Technology Center.

A rendering of the new Culpeper CTE School demonstrates how solar panels could be utilized to supplement needed power.

The Culpeper Career & Technical Education Facility will be built behind the Germanna Daniel Technology Center with access off of McDevitt Drive via Frank Turnage Drive, top left.

Applause broke out from the audience Tuesday morning after the Culpeper County Board of Supervisors unanimously approved $17.3 million in funding for the anticipated Career & Technical Education School slated to open a year from now behind the Germanna Daniel Technology Center.

The applause came from members of the school board and staff who have worked the past three years to bring the project to fruition.

“Thank you for believing in the process,” Culpeper County Public Schools Superintendent Tony Brads told the board of supervisors at its morning meeting. “Thank you for supporting the idea.”

It was in September of 2016 that the seven-member elected board officially endorsed the notion of building a facility where high school students could get trained to enter the workforce after graduation.

“We do CTE very well in Culpeper County,” Brads said, “Just not enough of it.”

Slated to open on Sept. 28, 2020, the public school will be open to sophomores, juniors and seniors from both Culpeper County and Eastern View high schools. It will offer training courses in computer-aided design, nursing, culinary arts, cosmetology, industrial maintenance, EMT, cybersecurity and five building trades. Last July, the Germanna Community College Education Foundation approved a 60-year lease with the school system for use of its land for an annual fee of $1.

Loughridge Construction of Richmond entered the low bid for the project at $14.5 million. The company’s previous projects include the Brooks Family YMCA in Charlottesville, the UVA Zion Crossroads Health Clinic and the Hanover Center for Trades & Technology in Mechanicsville, among many others.

Engineering for the Culpeper CTE School cost $1.3 million and $1.5 million is the projected cost for furniture, fixtures and equipment inside.

The Board of Supervisors approved money in the current year budget for debt funding for project and has been setting aside money for it for several years. The 2017 cost estimate for the project was $15.94 million. Brads noted Tuesday construction prices have increased since then while emphasizing major efforts to bring costs down, including substantial furniture, fixtures and equipment donations from Germanna Community College, and others.

While money is in the county coffers to pay for the new school, the county’s financial advisors at Davenport & Co. have recommended paying for the CTE facility with a low-interest loan, due to current rates, said County Administrator John Egertson.

While the Board of Supervisors did not formally vote Tuesday to take on the new debt, it wholeheartedly agreed to pay for the new school, including funding for five “add-ons”—a metal roof ($28,000) on which solar panels may be placed in the future; a canopy over the outdoor trades area ($224,000); skylights in the main corridor ($63,000); mezzanine storage ($366,000) and operable partitions ($74,000).

Chase suggested using on the CTE school roof the green grass roof vegetation made by the local company, Sempergreen. He noted it could be very ecological. Egertson agreed it was a good idea, but said it could be costly. He added the plan is to eventually place solar panels on the school roof.

Supervisor Steve Walker wanted assurance that the CTE School would be a shared facility between the two high schools. Brads said, absolutely, noting one facility for career and technical education was the most economical way to deliver the special training.

Supervisor Jack Frazier agreed, saying, “This has got to work. We’ve got to incorporate both schools in order for this to work.”

The superintendent said students from both schools would sign up for CTE classes during the normal registration process. Students will attend half-day at their home school and half-day at the CTE School.

“We will start with trying to make it fairly even,” Brads said of the number of students from each high school enrolled in CTE programs. “Some of the classes will be competitive and will fill up fairly rapidly—which is a good problem to have.”

The Board directed staff to work with the financial advisors in determining the best means for funding the project. “Our borrowing capacity is really good right now,” said Culpeper Finance Director Valerie Lamb.

She projected the interest for borrowing the $17.3 million would be less than 4 percent—or an estimated $1.2 million for 20 years. Frazier wanted to know how the financing could impact the county real estate tax rate. Lamb said the borrowing should not affect it. Egertson said the potential impact could be two cents to the tax rate over several years.

Big picture, said Walker, the school will attract new business to Culpeper County, thus keeping tax rates low. “The CTE School will be beneficial to having a trained workforce for the future industry,” he said.

Students will graduate with an industry credential and be prepared to enter directly into the workplace or to pursue further education and training after high school. The School Board is slated to award the construction contract at its meeting next week.