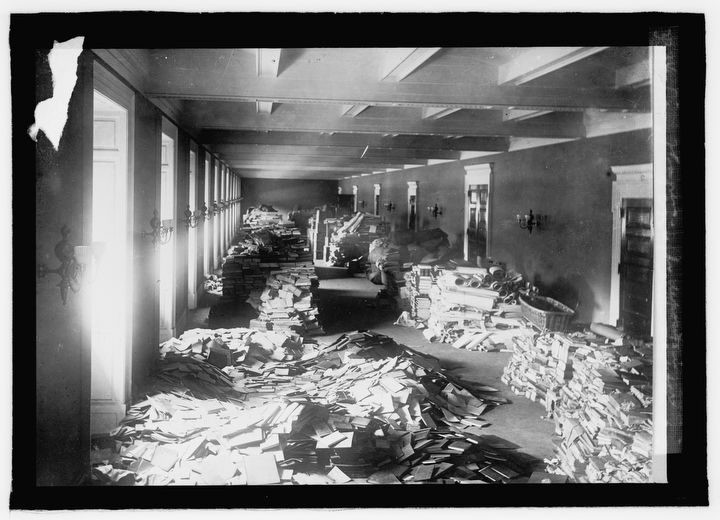 Before the dawn of card catalogues, libraries descended into cluttered chaos. A hall in the Thomas Jefferson Building of the Library of Congress, circa 1898, is strewn with copyright deposit materials. The collection was later organized and catalogued by staffers. 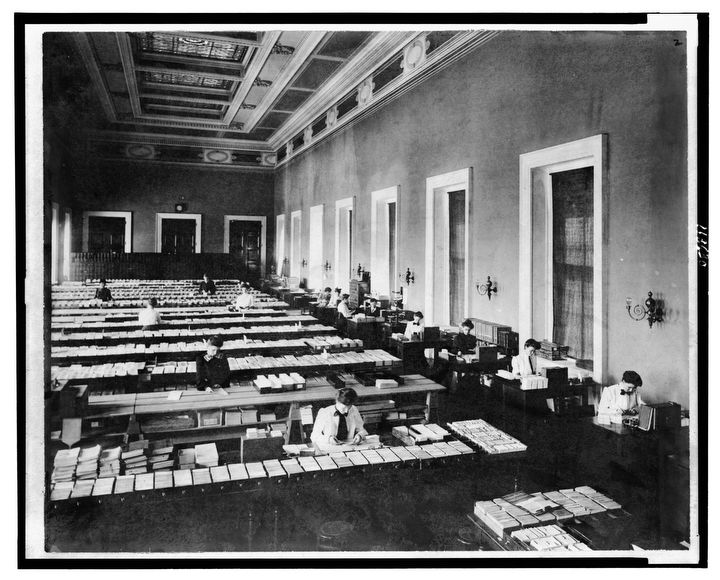 Staffers work in a card-distribution room of the Library of Congress's Card Division at a time estimated as between 1900 and 1920.

Before the dawn of card catalogues, libraries descended into cluttered chaos. A hall in the Thomas Jefferson Building of the Library of Congress, circa 1898, is strewn with copyright deposit materials. The collection was later organized and catalogued by staffers.

Staffers work in a card-distribution room of the Library of Congress's Card Division at a time estimated as between 1900 and 1920.

They'd just finished setting up projectors to create a replica of the planetarium Thomas Jefferson had envisioned spanning the University of Virginia's Rotunda dome when Neal Curtis and Sam Lemley stopped. They looked at each other. And they decided they had to come up with a plan - immediately

They walked into the school's Alderman Library and promised they wouldn't leave that night until they had found a way to save the old card catalogue.

So began a plan that would bring together a community of book lovers, 22,000 pounds' worth of cards and one rubber ducky.

The card catalogue was slated to be discarded during a massive library renovation. Small wonder: It hadn't been updated in two decades, it sat mostly unused, and it would cost hundreds of thousands of dollars to save. The catalogue is physically massive, with 4 million cards. (Four dump trucks' worth, an administrator calculated.)

But Curtis and Lemley are graduate students, researching and writing dissertations about 17th- and 18th-century literature. They had used the card catalogue extensively in a project documenting the books in the school's first library, the Rotunda. Jefferson designed the university so a library - rather than a chapel or seminary - was at its heart.

A fire in the Rotunda in 1895 left many books in ashes. Curtis, Lemley and other U-Va. researchers wanted to re-create a record of the volumes deemed essential in the university's founding years, and learn how the collection had been rebuilt, often through books donated by local families.

The cards sometimes included information that the school's digital records did not - typed or handwritten notes on the back detailing the books' provenance. One of the first drawers Curtis pulled out yielded a surprising find: A book about botany from the original library had been signed by one of the school's instrumental founders. And then Curtis found that the book still existed, in a special collections library at U-Va. - but with no record of it in the digital system.

It wasn't just the ties to Jeffersonian times that inspired them. U-Va.'s card catalogue spanned 50 years, from the 1930s to the late 1980s. Those were tumultuous times for the nation and the university, with World War II and the Civil Rights movement, female and black students changing the school.

When books are permanently removed from the library, they're deleted from the digital catalogue. But the card catalogue provides "an accurate, preserved-in-amber view of what the library was in the 20th century," and what interested scholars, Lemley said.

Faculty members and others lobbied to save the catalogue. But with limited space for new books, 65 large wooden cabinets were clearly impractical. Library leaders are already on a tight schedule before work to remove asbestos begins in January. The renovation needs are sweeping - and urgent. "It's a building full of paper and students with no fire suppression," John Unsworth, the university librarian said, then laughed and added, "except the asbestos."

It would cost the public university about $750,000 to scan the cards for a digital record, Unsworth said.

So Lemley and Curtis got to work. At Alderman late that night, they measured and calculated. They schemed and refined. And by noon the next day, they had a proposal that included the cubic feet it would take to store the contents of the cabinets, the cost per box to ship and store them, and a plan that could transport 4,000 drawers' worth of cards, in precise order, out of the library. By Jan. 7. Money to underwrite the effort - Unsworth pegs the cost at $75,000 - would come mainly from donors. And the labor for this gargantuan task would come from volunteers.

The card-catalogue system was designed to bring order to chaos, said Peter Devereaux, the author of a book about card catalogues. The idea originated during the French Revolution, by using playing cards to catalogue libraries seized from churches and aristocrats.

By the mid-19th century, it was common for books to be catalogued on cards, said Devereaux, a writer-editor at the Library of Congress Publishing Office.

But with a surge in book publishing at the turn of the 20th century, the growing size of card catalogues was becoming a problem. The death knell came in the 1960s, with the beginnings of machine-readable data. In the 1970s, many larger libraries switched to computers and over the years, Devereaux said, a lot of card catalogues "ended up in the dumpster."

Now, people can find books swiftly, and digital catalogues are easily updated. Yet even among those who acknowledge the advantages, there are some, like Page Nelson, who worked in libraries at U-Va. and Harvard University, who are wistful.

"It's deadly to sit at a computer all day. It can be soul-destroying," Nelson said. But thumbing through cards in search of books is "like playing a musical instrument."

As a junior cataloger at U-Va. in the 1980s, Nelson said it took three weeks of training to learn the layers of organization necessary.

Most of his time was spent working at a desk, but every Thursday afternoon, he and his colleagues would go out with six-inch-tall stacks of cards to file them in drawers. It might sound tedious, he said, but he remembers it affectionately. "It was as if you were in the hedge maze at Hampton Court," he said, holding the cards and circling the big wooden banks of the card catalogues, with light streaming in under the high ceiling of Alderman's lobby. "It was a marvelous opportunity to chat with people you didn't chat with normally, flirt, have charming conversations."

Not everyone felt the charms, he acknowledged. "There was a chap that didn't seem perfectly happy in the work," even as his co-workers admired how quickly he was able to file the cards. Then one day his assigned cards were found in a trash can. "He was," Nelson said, "the fastest filer."

U-Va.'s president emeritus, John Casteen, who is an English department faculty member, worked in Alderman as a student in the 1960s, so he knew information was written on the backs of cards. He remembered finding tomes from Jefferson's library shelved on open stacks, some getting checked out, with their historical importance unrecognized.

When he learned of the students' preservation plan, he and his wife offered financial support, triggering other gifts.

With the blessing of university leaders, volunteers - including undergraduates, professors and at least one senior administrator - began moving the cards from drawers into boxes, following a complex but orderly system. In their detailed seven-page workflow plan, Lemley and Curtis drew maps of the cabinets - which are no longer in alphabetical order - and diagrams.

"If I didn't start out with one, I definitely have an affinity for card catalogues now," Curtis said, laughing. "I don't know if it's real or forced because I have to convince myself I love these things after spending so many hours with them." By late December, he and Lemley had spent about 200 hours on the library's fifth floor, where books had been moved out for the renovation, leaving empty shelves for the boxes being filled with cards. Two-thirds done.

The scale is staggering, Lemley said; if they stacked the cards in a single pile, it would stretch more than a mile high.

Occasionally, there's a surprise. There was an electrical fuse left in one drawer. A nail clipper in another. And in the midst of a row of cards, as though marking a book, one rubber ducky.

Unsworth's surprise: "The practicality of graduate students." They took the administration's concerns seriously and came up with a viable solution, he said. "Their devotion to the cause is inspiring."

Late at night, they're packing those cards. "It feels like we're doing something important," Curtis said. "And we do have a deadline - a very real deadline. The end is near."

In the end, 798 boxes will be trucked to off-campus storage. Eventually, they will be bar-coded and housed in part of the library system so researchers can request a box, and thumb through the cards.

One wooden cabinet will stand in the new entryway to Alderman, Unsworth said, with cards chosen by Curtis and Lemley.

They already have another plan, Curtis said, inspired by Nelson and his lyrical descriptions of the cards ("every one a cuneiform clay tablet"): Over the next few months, they want to record more interviews with past catalogers and filers. They'll create an oral history of the card catalogue.