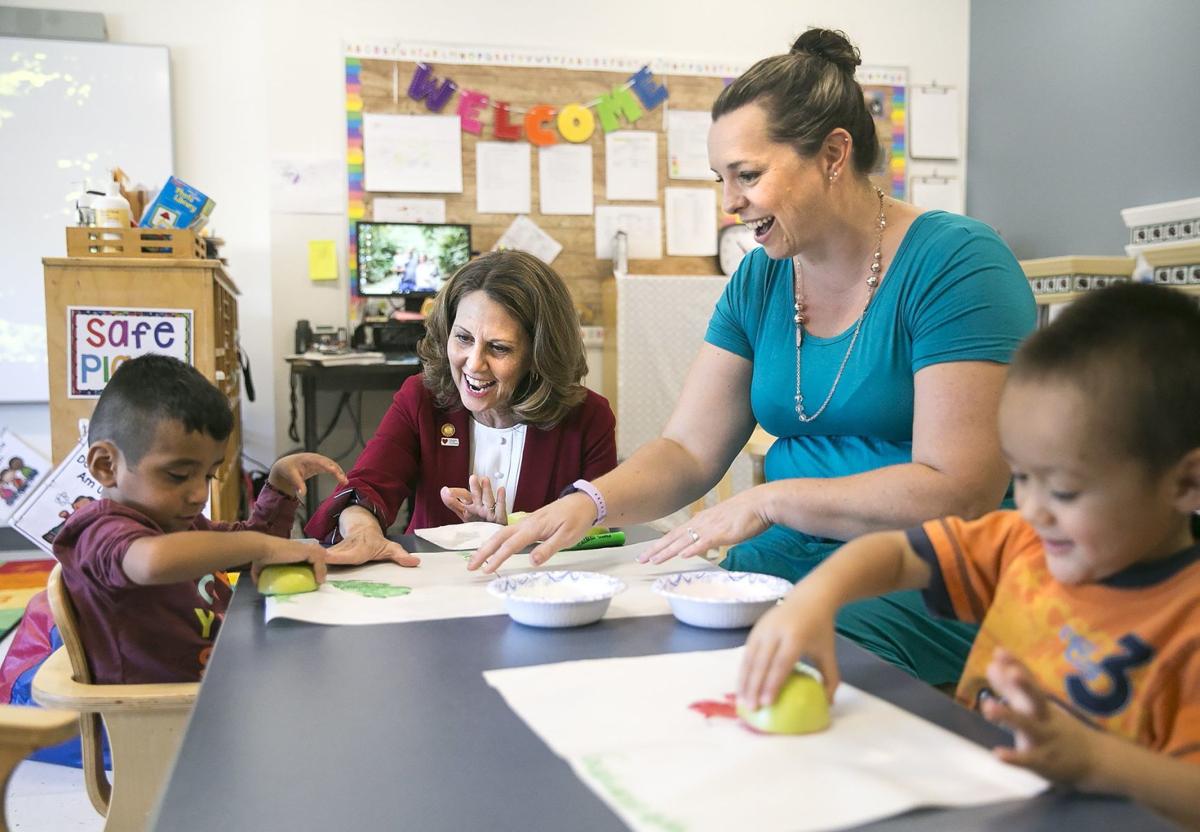 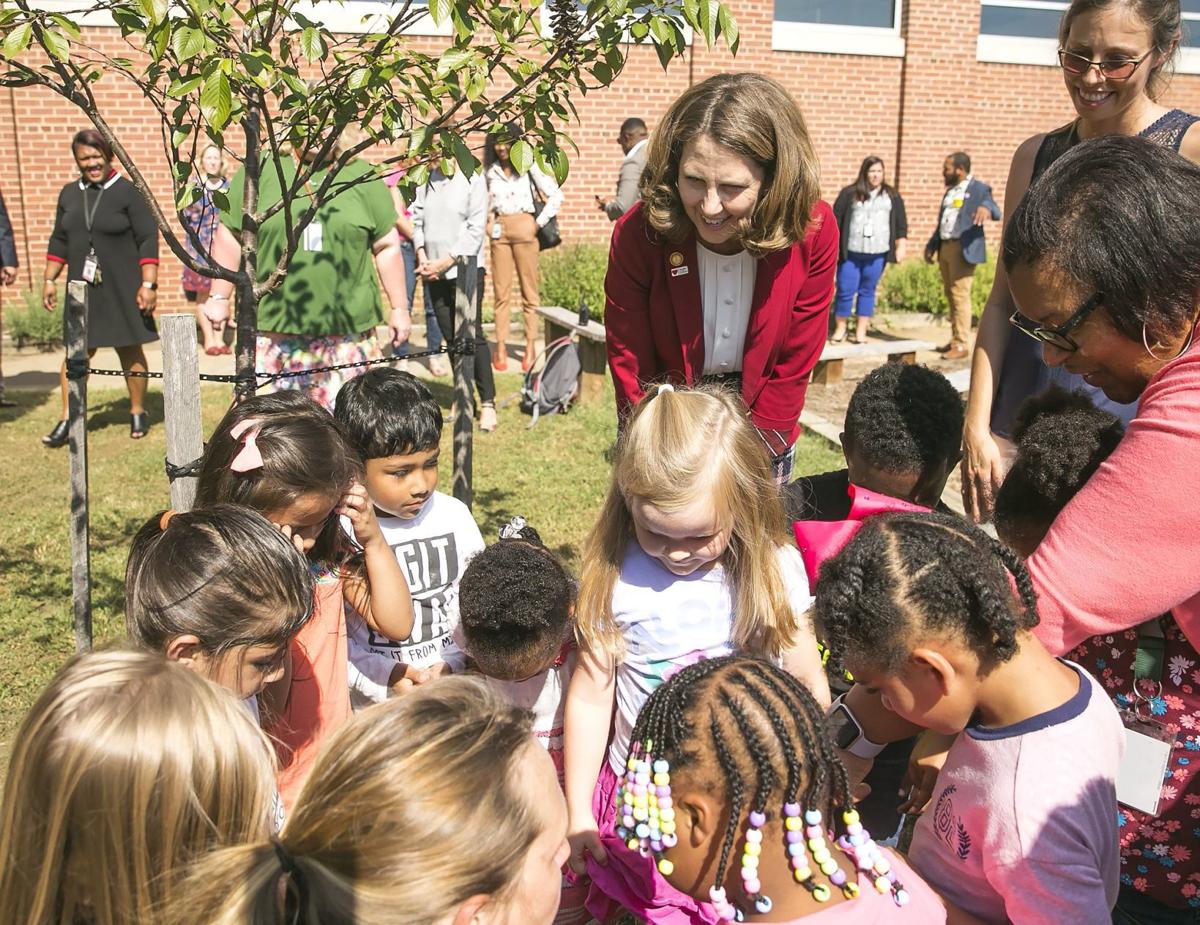 Northam and Walker–Grant Center students look at a monarch butterfly during the first lady’s visit Monday. 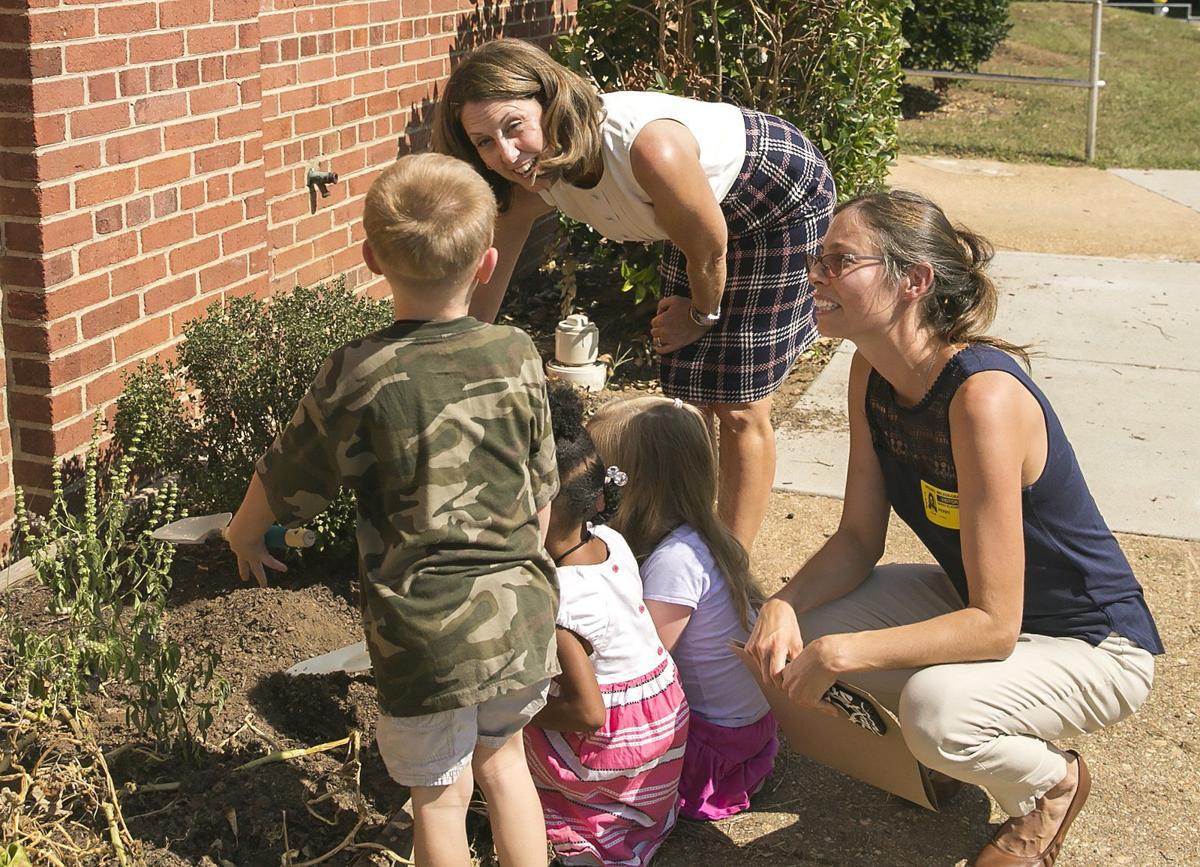 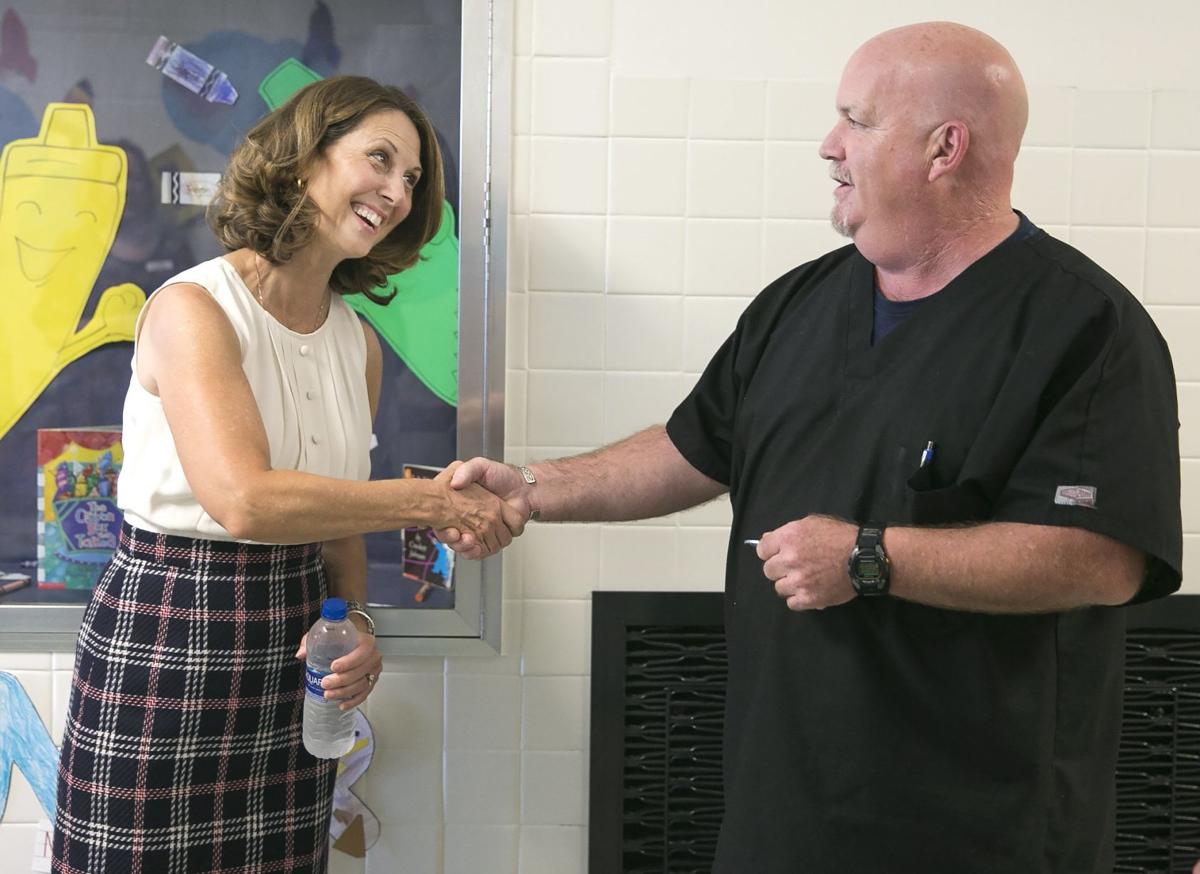 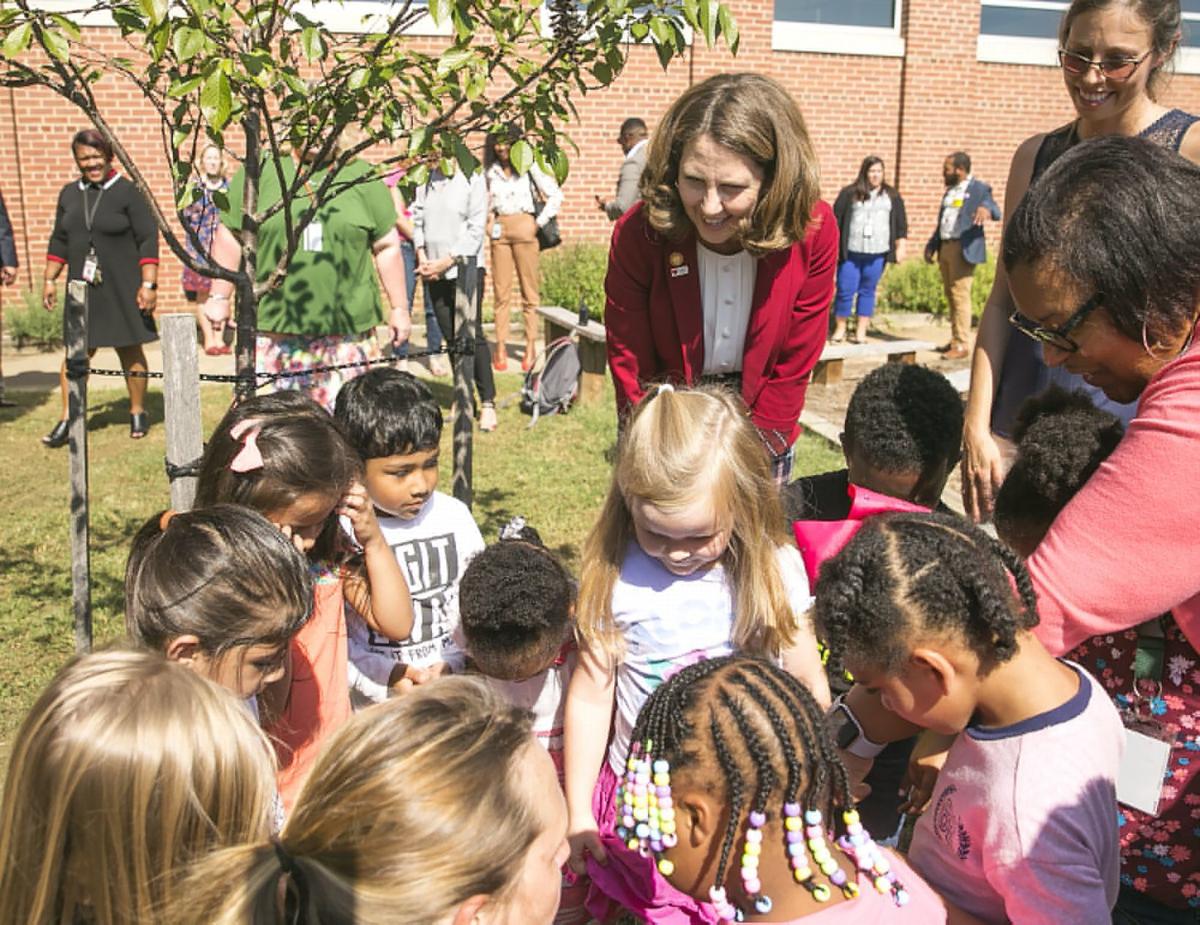 Virginia First Lady Pamela Northam looks at a monarch butterfly with students during a visit to the Walker-Grant Center in Fredericksburg on Monday, Sept. 15, 2019.

Northam and Walker–Grant Center students look at a monarch butterfly during the first lady’s visit Monday.

Virginia First Lady Pamela Northam looks at a monarch butterfly with students during a visit to the Walker-Grant Center in Fredericksburg on Monday, Sept. 15, 2019.

Virginia first lady Pamela Northam asked the 3-year-olds clustered around her Monday to find the yellow and black swallowtail caterpillar hiding among the leaves of her parsley plant.

“Can I hold it?” asked one of the students in Scarlett Walker’s Virginia Preschool Initiative class at the Walker–Grant Center in Fredericksburg.

“She gets very scared, so we have to leave her on the plant,” said Northam.

The former high school biology teacher encouraged the students to rub the plant’s leaves instead, and sniff its sharp, herbal scent on their fingers. Then she asked if they could turn the Play–doh they’d been cutting into shapes to craft their own caterpillars.

“Well done!” Northam said, as all six students began industriously rolling chunks of the stuff between their palms to make caterpillar shapes.

The Walker–Grant Center was the second stop of the day on the first lady’s second annual Back to School Tour. She’s visiting early childhood education programs and elementary schools in each of the state’s eight superintendent regions this month to highlight the importance of school readiness. Monday’s tour also included stops in King George and Spotsylvania counties, and ended with the ribbon cutting for the North Star Early Childhood Education Center in Stafford County.

Northam was an educator for 12 years and became a national award-winning science specialist after recognizing the need for STEM education in elementary school. That led her to develop an inquiry-based, hands-on curriculum for students in kindergarten through fifth grade.

As first lady, she’s made improving the quality of early childhood education throughout the state her special project. A major focus is to make sure Virginia’s kindergartners are ready for school, and that the state’s children have access to fresh and healthy food.

In Kirsty’s Valentic’s Early Childhood Special Education class, Northam watched 3-year-olds dip apples sliced in half into paint and then make prints on pieces of white paper. Then she used the parsley plant that she’d brought from her garden at the Executive Mansion in Richmond to engage with the students, who got to look through its leaves to find the caterpillar.

She also stopped in Brenda Good–Wright’s Head Start class, where groups of students were busily involved in a variety of activities. Good–Wright was eager to tell Northam that she’d started out as the parent of a Head Start student, volunteered in the classroom, became an instructional assistant, family service coordinator and then a parent engagement coordinator, but missed working with the students and returned to the classroom.

“I just got my provisional license,” she said.

“You’re doing great, my friend. I can tell,” Northam said.

The first lady also took part in the weekly Garden Sprouts class, which Downtown Greens holds outdoors next to the garden it helped start at the Walker–Grant Center last year. Beth McClain, the Garden Sprouts leader, was holding up a picture of a tree and asking the 11 students in Teresa Alexander’s VPI class what kind of fruit was hanging from its branches. Later, she held up a mesh butterfly habitat cage and asked if they wanted to help her set free the monarch butterfly inside.

Northam showed them the caterpillar she’d brought so they could see what butterflies look like in an earlier stage of their life cycle. Then, the students gathered around McClain, who let one student unzip the top of the cage as a flash of orange and black wings flew out and fluttered away.

“That was crazy fun,” Northam said. “It’s going all the way to Mexico.”

She also got to watch the students dig holes in the garden to plant lettuce and use child-sized watering cans to water the garden.

“I love school gardens, but it can be such a commitment,” she said to Laura Dove, the preschool programs’ supervisor; Andrea Bumbrey, the programs’ director; and others on the tour. “Have you thought about rain barrels? It can be a great learning opportunity.”

Afterward, she talked to Sarah Perry, Downtown Greens executive director, and Heidi DiEugenio, a founding board member of the Doctor Yum Project. Dr. Nimali Fernando, a Spotsylvania County pediatrician, started the Doctor Yum Project in 2011 to teach her patients and their families about the benefits of healthy eating.

Its programs now include The Doctor Yum Preschool Adventure Program, which helps to fight childhood obesity by encouraging youngsters to try fresh fruits and vegetables and offering a monthly cooking class. The body mass index, or BMI, of preschoolers at the Walker–Grant Center has gone down over the past two years.

“You’re doing great work here,” Northam said. “It’s a great inspiration for all of us.”