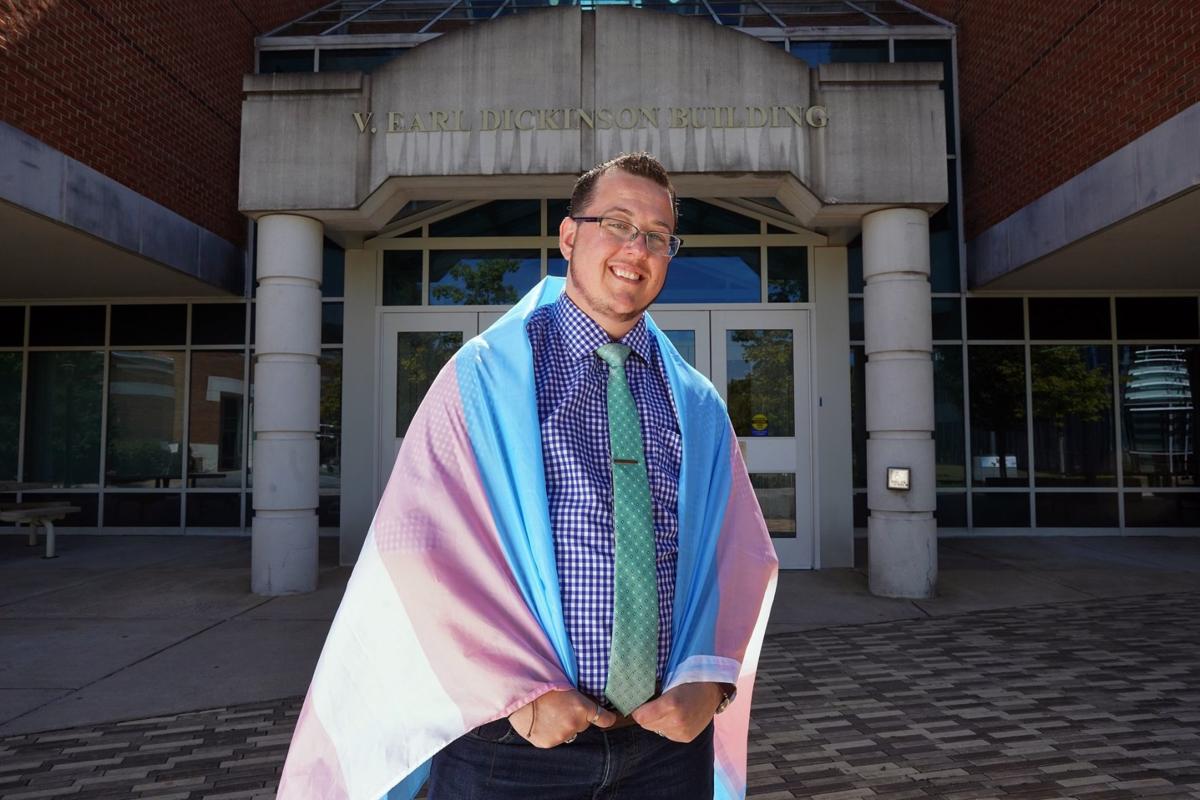 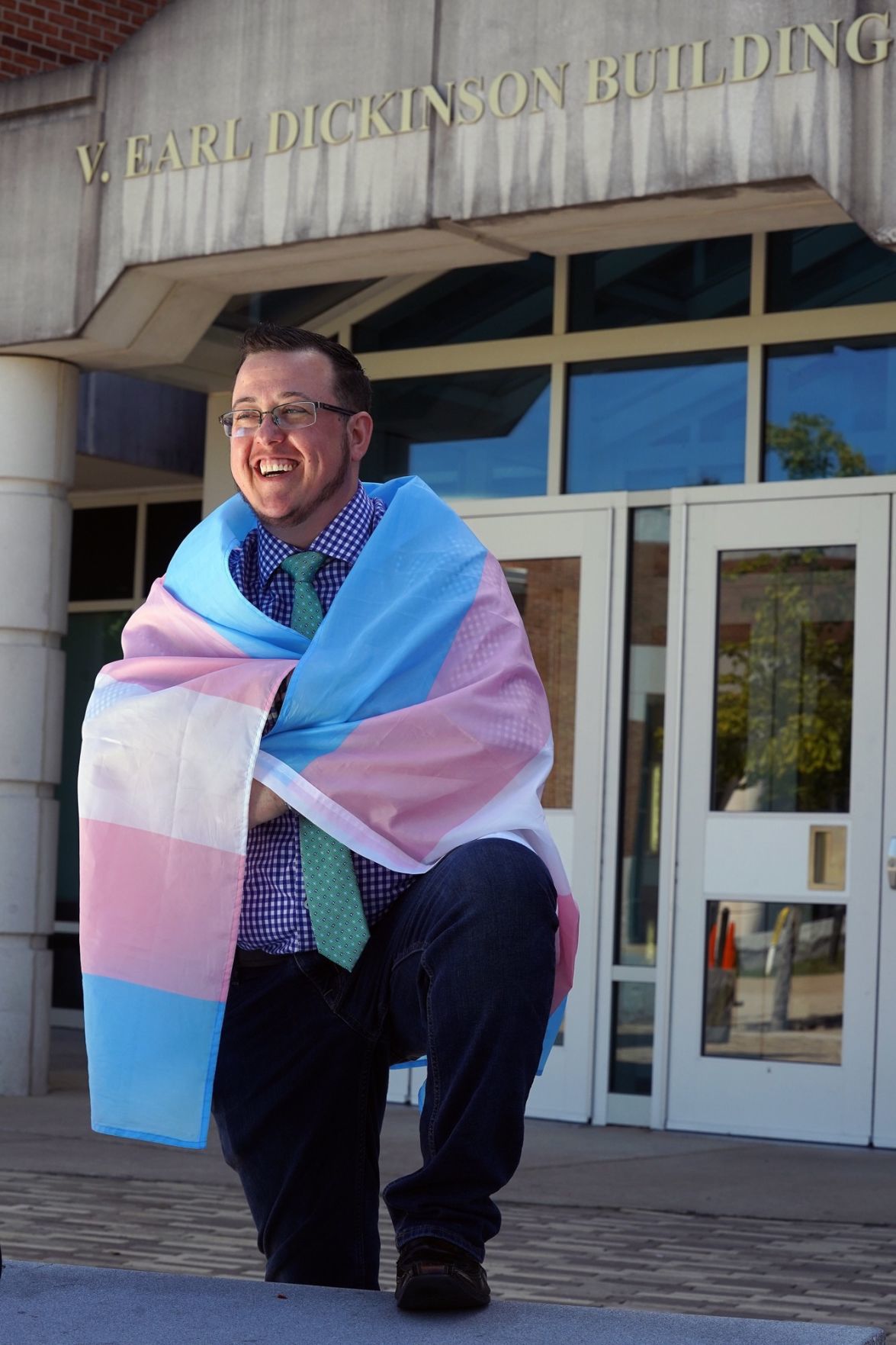 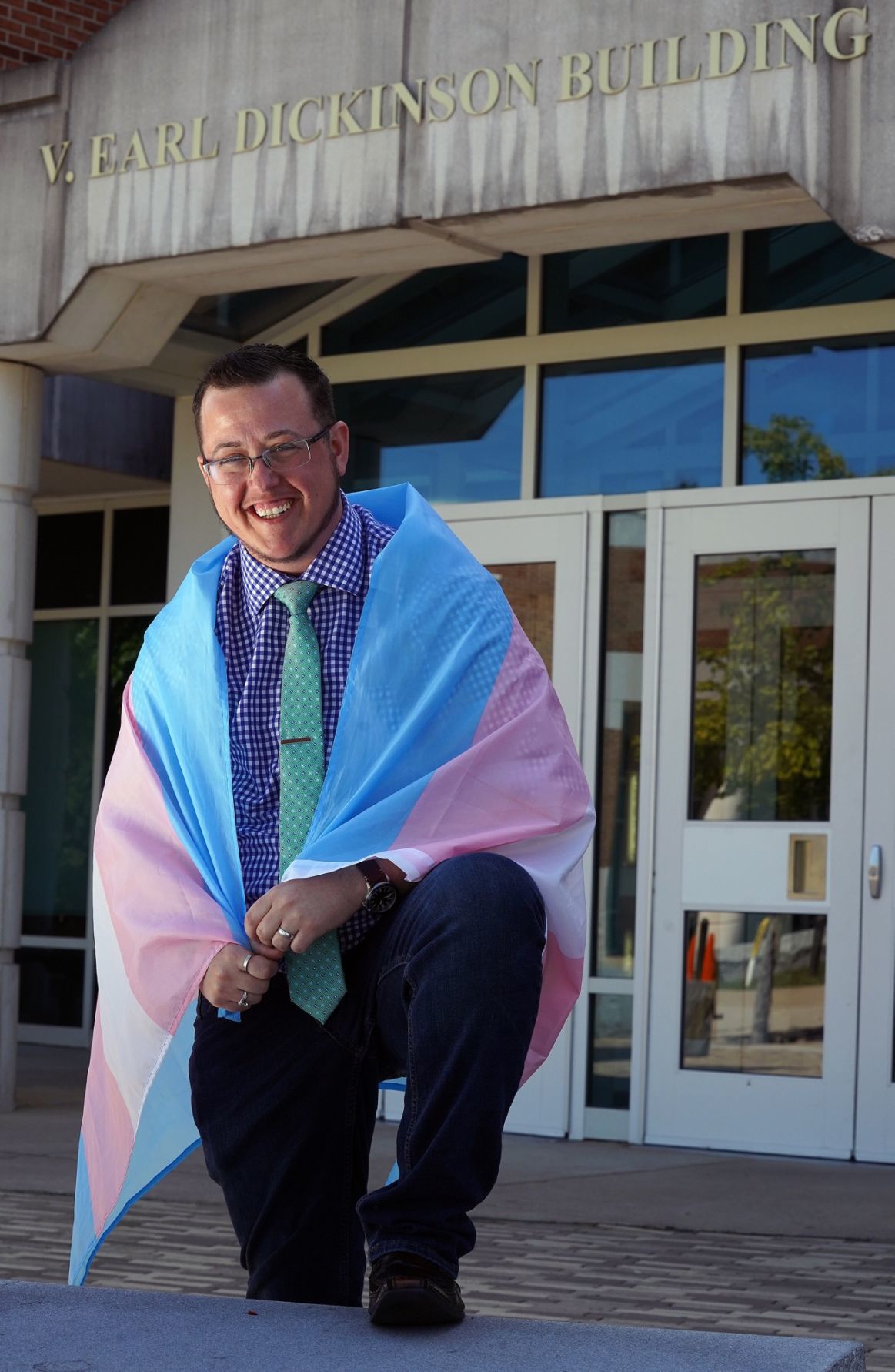 Jessie Harper looks forward to the day when his gender identity no longer comes up in his daily interactions with people and the world.

gay and transgender people feel safe being themselves, he said.

“I don’t want the conversation to stop until the hate crimes stop,” the 33-year-old Harper said. “And we’re not there yet.”

“I love educating,” he continued. “This is who I am, and this is what it means. I want to be a good example for the rest of the trans community.”

Previously, he was president of Germanna’s Sexuality and Gender Alliance Club, where he organized a drag show to collect canned food and other nonperishable items for the school’s food pantry, a Day of Silence to protest bullying of LGBT people and safe zone training for faculty and staff on how to teach and interact with the LGBT community.

Harper said he has always felt accepted at Germanna because he has always been vocal about being a transgender man—but it’s taken most of his life to feel comfortable enough with who he is to be outspoken about it.

Harper started transitioning from female to male just two years ago. Growing up in a tiny town in Kentucky—Fredonia, population about 400—he didn’t know being transgender was even a possibility. In high school, he came out as a lesbian and was “the only gay for miles.”

His aunt, who raised him, was not supportive—“She threw a Bible at me,” Harper said—and he said his classmates met him with hostility and fear.

“I was a terrible teenager,” Harper said. “I decided, if you’re already not going to like me just because of who I am, then I’m going to work hard to make you hate me.”

In addition to his sexuality, Harper said he faced discrimination because of his family’s low economic status and a learning disability that means it takes him longer to read and understand something.

He failed third grade, and at 22 was reading at a seventh-grade level.

“I was the generation of ‘No Child Left Behind’ and I got left behind,” he said.

Harper thinks his teachers didn’t see the point of going out of their way to teach to his needs.

“I was already poor as it was, so what was I going to end up doing?” he said.

Harper started college at Murray State University in Kentucky, but dropped out because he felt it was too big.

“I was getting lost in the shuffle,” he said.

When he was 22, he met the woman who is now his wife. She worked in higher education and he moved around the country with her, from Kentucky to Massachusetts and then to Virginia in 2014.

When they were living in Richmond, Harper started performing in drag shows, raising money for a women’s shelter under the stage name “Jack Twist.”

The journey through drag helped him realize he was transgender. Back in 2010, a friend had come out as trans, and Harper said it took him a very long time to accept his friend, because he was scared.

But seeing himself in costume as Jack Twist, in men’s clothes and a beard with bound chest, made it obvious to him that he was a man.

“Taking off all that stuff was depressing,” he said. “Why couldn’t I always live like that?”

In a video filmed for Germanna, Harper points to his head and says the difference between being a gay woman and a transgender man is “in here.”

“Here, I know that I am a man,” he says in the video. “For a lesbian, here, they are a woman who is attracted to other women. Sexuality and gender don’t always coincide.”

In 2016, Harper and his wife had a son. Soon after, he started transitioning. A Richmond doctor prescribed testosterone supplements, which he takes once a week, and last year—after he and his family moved to the Fredericksburg area—he became only the second person in the area to have top surgery done by a local plastic surgeon.

“Since he’s been able to talk, my son has called me ‘Daddy,’ ” Harper said.

Harper said his son—for whom he writes poetry and makes up bedtime stories—was his inspiration to go back to college. He wants his son to have a positive role model for the importance of reading.

Harper enrolled in Germanna. It was scary to be an older student, not to mention one with a learning disability who was also openly transgender—but he said he’s always felt welcomed.

“[Germanna president] Dr. [Janet] Gullickson’s office window has a rainbow sticker that says ‘Ally,’ ” he said. “That’s the first thing you see when you walk up to the front door. All she wants is for you to have what you need to be a good student.”

Support from his family—including his aunt and uncle, with whom he’s close again—has helped him succeed academically and he began to get involved in student organizations.

This fall, Student Activities coordinator Kiera Scruggs encouraged him to run for Student Government Association president, so he did—and won.

“My job is to listen to my fellow students, to be the voice for them, so they have what they need,” Harper said.

He wears his Germanna name badge to class so he can explain to his classmates what SGA can do for them.

“Right now, I’m trying really hard to get a basketball court on campus,” he said.

Harper is on track to graduate from Germanna with an associate’s degree in general education this spring. He hopes to transfer to the University of Mary Washington in the fall, where he plans to study history. Then, he wants to get a master’s degree and work in higher education.

“I want to help students figure out how to take care of themselves and what to do with their lives,” he said. “And be a role model for them to show that if I can do it, you can do it. Ask for help. It’s gonna suck at points, but I didn’t ever think I would be as far as I am.”

Sharing his story includes sharing his journey to being out as a transgender man.

“I didn’t have resources to know how to be who I was,” Harper says in the Germanna video. “Getting to discover that as old as I am, and getting to share that with younger students is really awesome.”