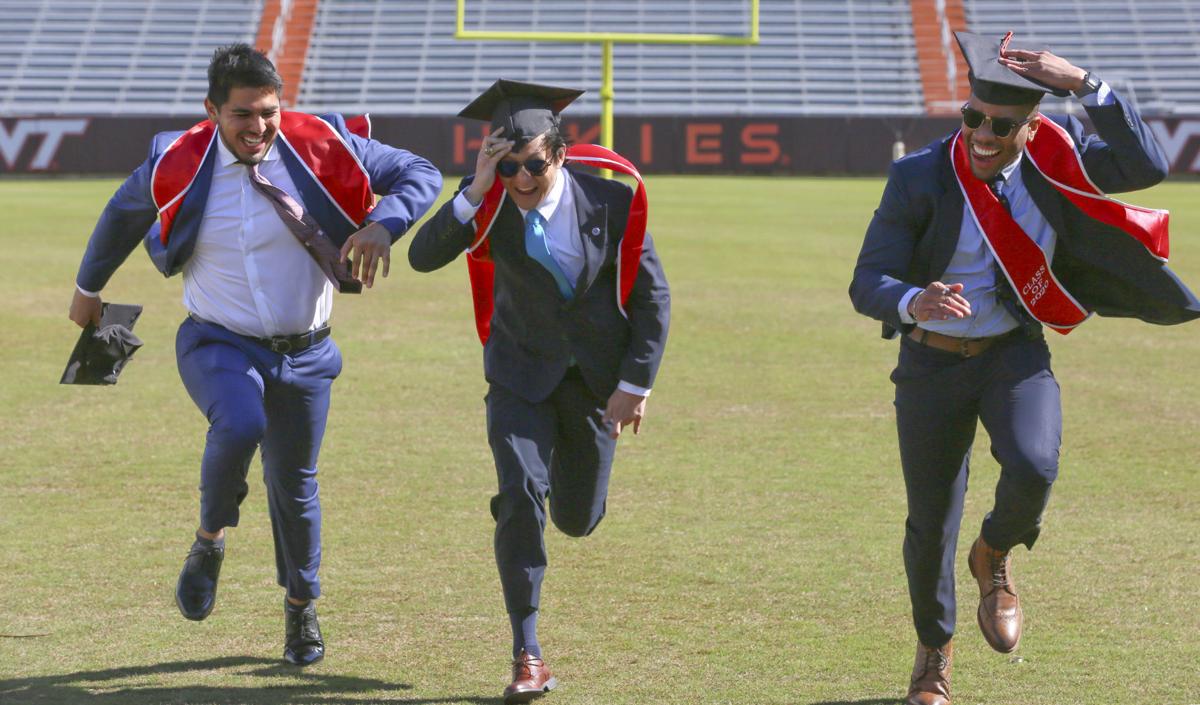 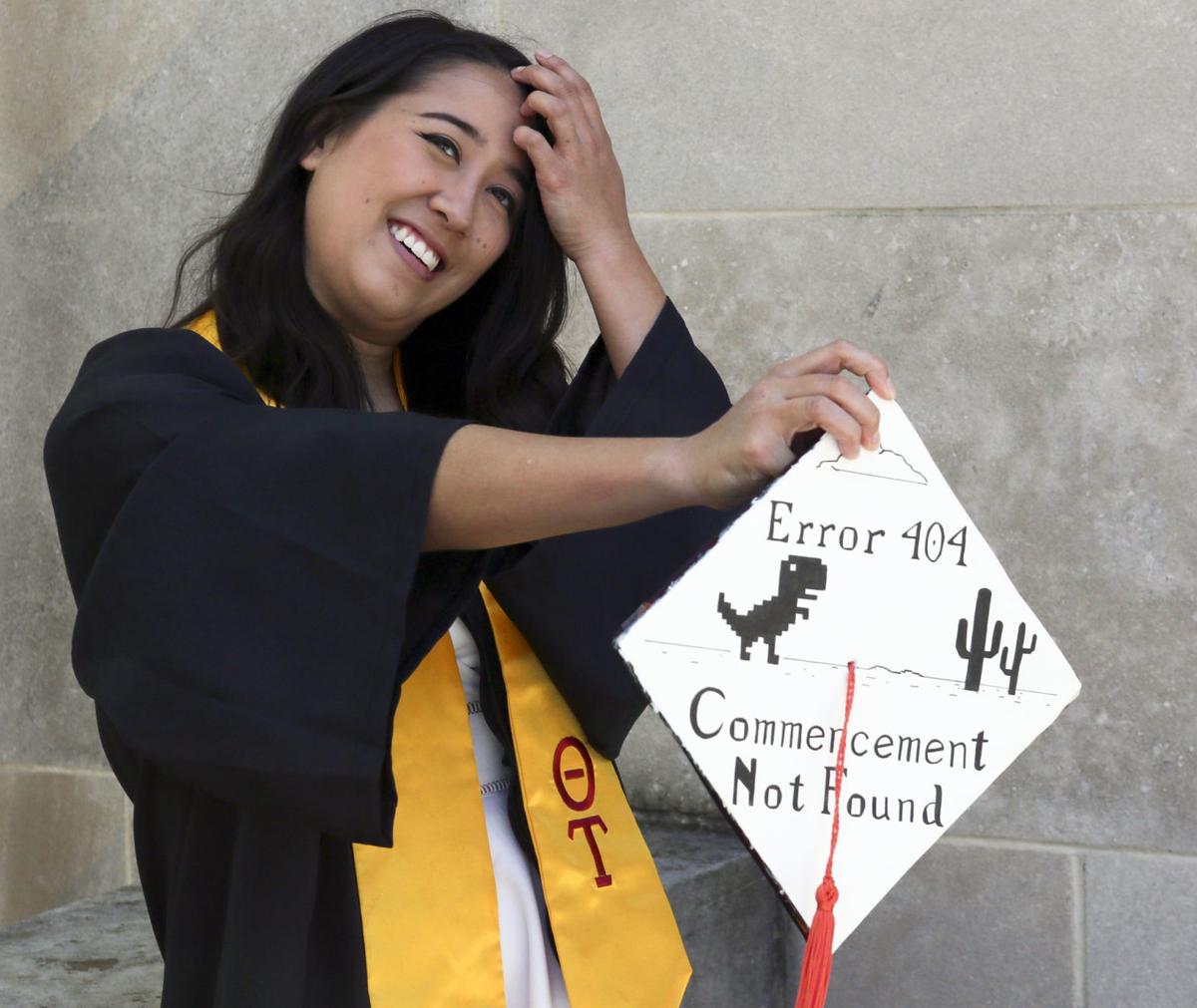 Class of 2020 computer science major Vanessa Arndorfer shows off her mortar board design while making graduation photographs with friends Alec Klevenhagen and John Leberre on the Virginia Tech campus this month. 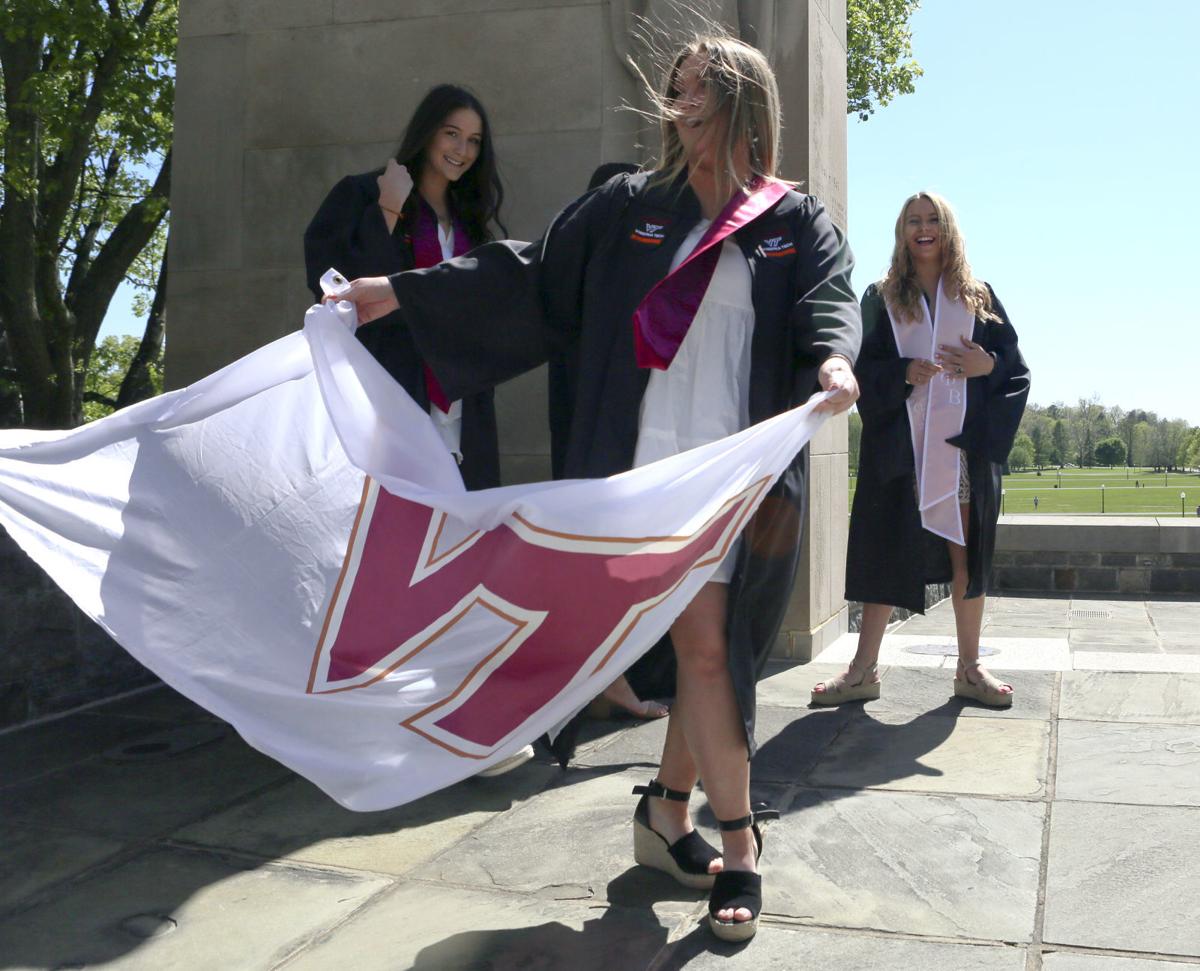 A group of 2020 graduates calling themselves “freshman friends” display a school flag while taking graduation photographs at the Pylons on the Virginia Tech campus. 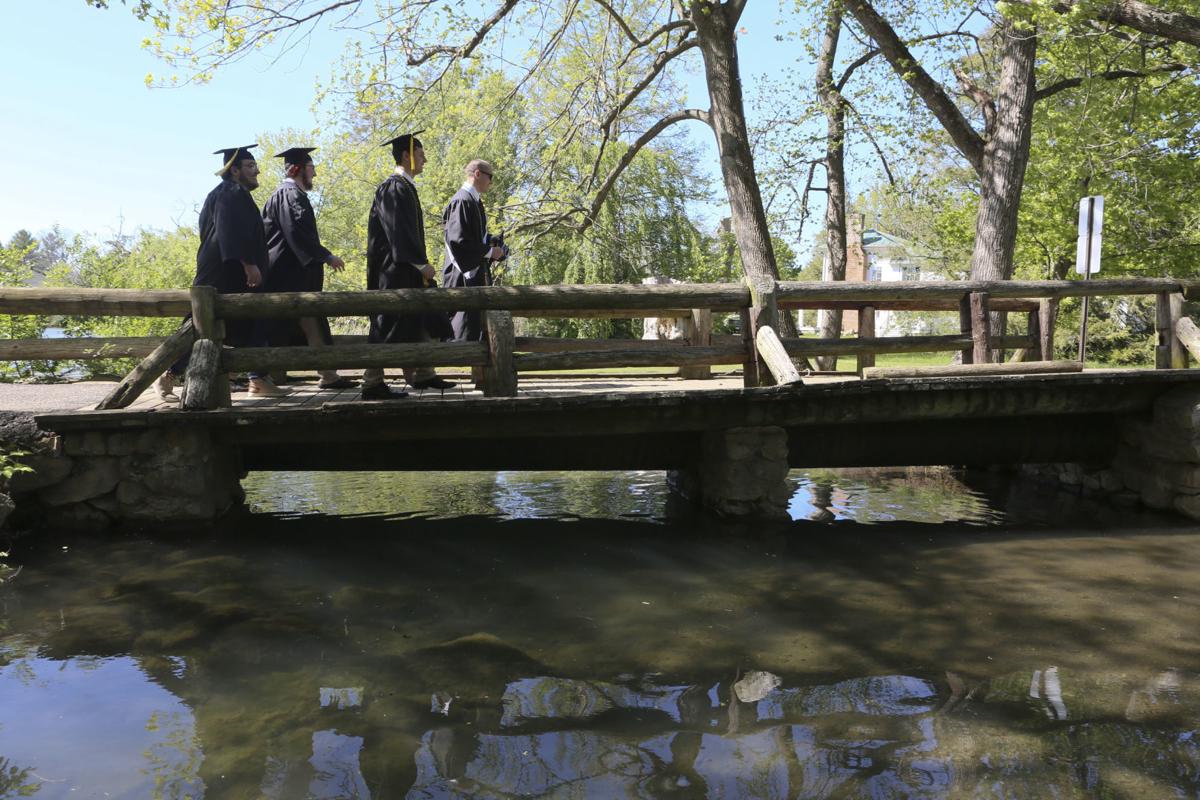 (From left) Ryan Shifflett, Dexter Howard, Ian Levine and Ben Strickland cross a bridge at the Duck Pond while on a graduation cap and gown photo safari. The soon-to-be-graduates became friends during their time at Tech and spent the day revisiting campus.

Class of 2020 computer science major Vanessa Arndorfer shows off her mortar board design while making graduation photographs with friends Alec Klevenhagen and John Leberre on the Virginia Tech campus this month.

A group of 2020 graduates calling themselves “freshman friends” display a school flag while taking graduation photographs at the Pylons on the Virginia Tech campus.

(From left) Ryan Shifflett, Dexter Howard, Ian Levine and Ben Strickland cross a bridge at the Duck Pond while on a graduation cap and gown photo safari. The soon-to-be-graduates became friends during their time at Tech and spent the day revisiting campus.

From Burruss Hall to the War Memorial Pylons, the senior’s trip across a nearly deserted campus amplified the new reality: He would miss out on a traditional commencement. His father, an army officer in Nigeria, had canceled his flight. In normal times, he would have seen his son accept a diploma at Lane Stadium.

“Having him come and see me walk across the stage would have been closure,” Nwogu, 22, said about hurdles he faced along his path to graduation. “To lose that experience is heartbreaking, but, to look at the big picture, there are a lot of people losing their lives, losing their jobs. I commend Tech for trying to just make the best out of it.”

On Friday evening, Nwogu will be one of 5,554 students who will graduate with a bachelor’s degree from Tech. It’s the first time the university will hold an entirely virtual commencement, as schools nationwide have been forced to do amid the coronavirus pandemic.

The university’s main ceremony will begin at 6:30 p.m. and last about 40 minutes. Viewers will also be able to watch college-specific videos, in which graduates can hear their names read.

Commencement will also feature a digital version of the traditional Hokie Bird “reveal,” when seniors who have served as Tech’s mascot unveil their identity by wearing Hokie bird feet.

Officials shot about 50 videos for the entire commencement sequence. The videos will be streamed on Friday and will remain viewable afterward.

One of the honorees, Michael Quillen, a 1970 graduate, plans to draw a connection between the Class of 2020’s experience and his own.

“It’s a little bit ironic, and it’s certainly not any comparison, our class was disrupted in the spring due to the Vietnam War protests,” Quillen, 71, said in a phone interview Friday, recalling a military building being burned on campus and state police breaking up a sit-in.

“It certainly was disruptive for our graduation year. It was as emotional and maybe even as dramatic a time, where our lives were heading that spring.”

Quillen, a former board of visitors member, will receive Tech’s highest honor, the Ruffner Medal, for his service to the university. An engineering student at Tech, Quillen would go on to found Alpha Natural Resources, a coal mining company.

Typically, Tech’s commencement ceremony attracts thousands to Blacksburg, where hotels and shops take advantage of the influx in business. Before Sands announced in March that the ceremony would move online, the local chamber of commerce lobbied the university president not to cancel.

“I do feel for our seniors,” Sands said at a virtual town hall meeting in April. “This is a big loss, but we’re all making do with the best we can.”

Tech says the graduates will be honored at an in-person ceremony Sept. 26 during a home football game, if physical distancing guidelines are relaxed by then.

The university also has invited members of the Class of 2020 to take part in real-life graduation ceremonies that are planned for December 2020 and May 2021.

For Nwogu, the online substitution and alternative dates aren’t a priority.

“It was a nice gesture but I knew from the start that I was not going to attend,” Nwogu said. “I don’t want to sit in front of my laptop watching that.”

But when Tech announced its decision in March to move commencement online, Nwogu didn’t join in the social media choir of students calling for a late-summer graduation.

“I was trying to defend Tech a little bit, too, because even at that point, it’s still going to be longer term. You see states opening back up, but the cases are still rising,” he said of COVID-19 cases in Virginia. “It was unfeasible for us to have any sort of ceremony. Online is the only way to go.”

After he graduates with a degree in industrial and systems engineering, Nwogu will take a consulting job with Ernst & Young in Northern Virginia.

He feels lucky that he’s secured a job in a market that has been upended by the coronavirus. And he feels grateful to his father, a single parent who came to the U.S. a few years ago to pursue a doctorate, and who is now back in Nigeria and putting three kids through college on an army officer’s salary.

“That ceremony was as much for him as it was for me,” Nwogu said. “As long as he’s still proud, that’s all that matters to me.”