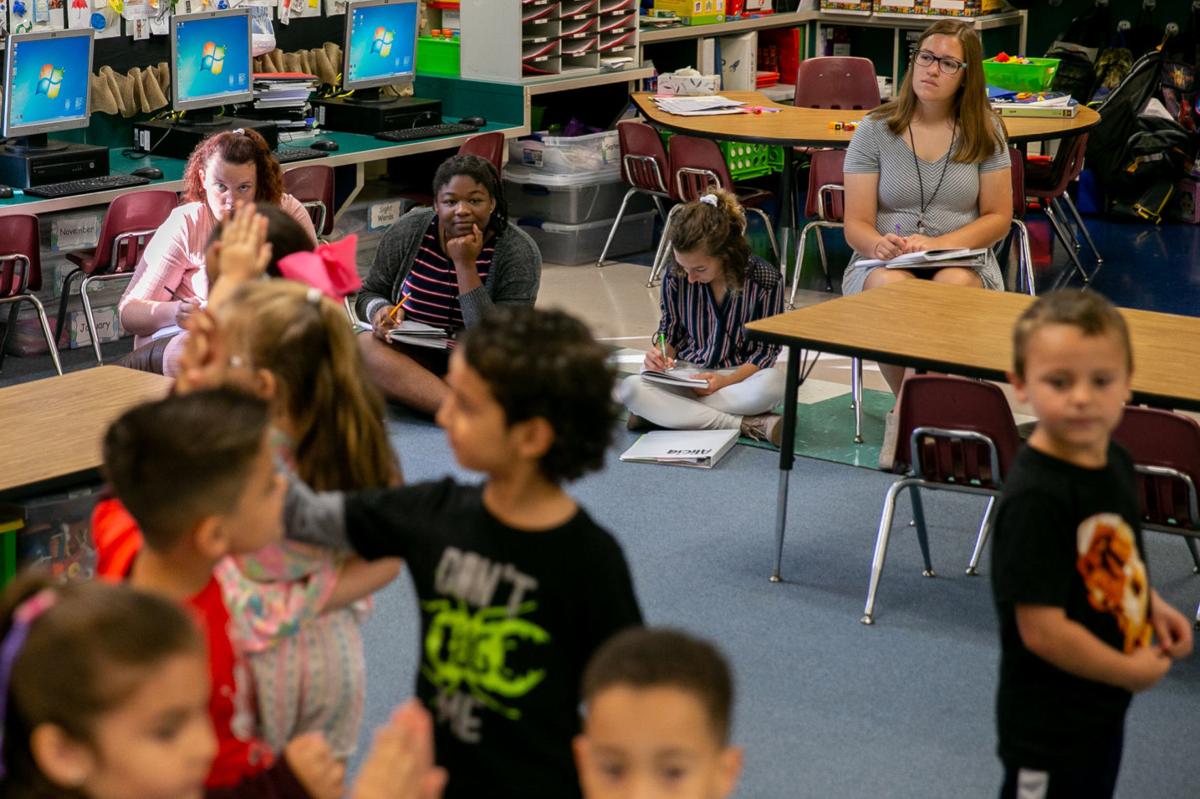 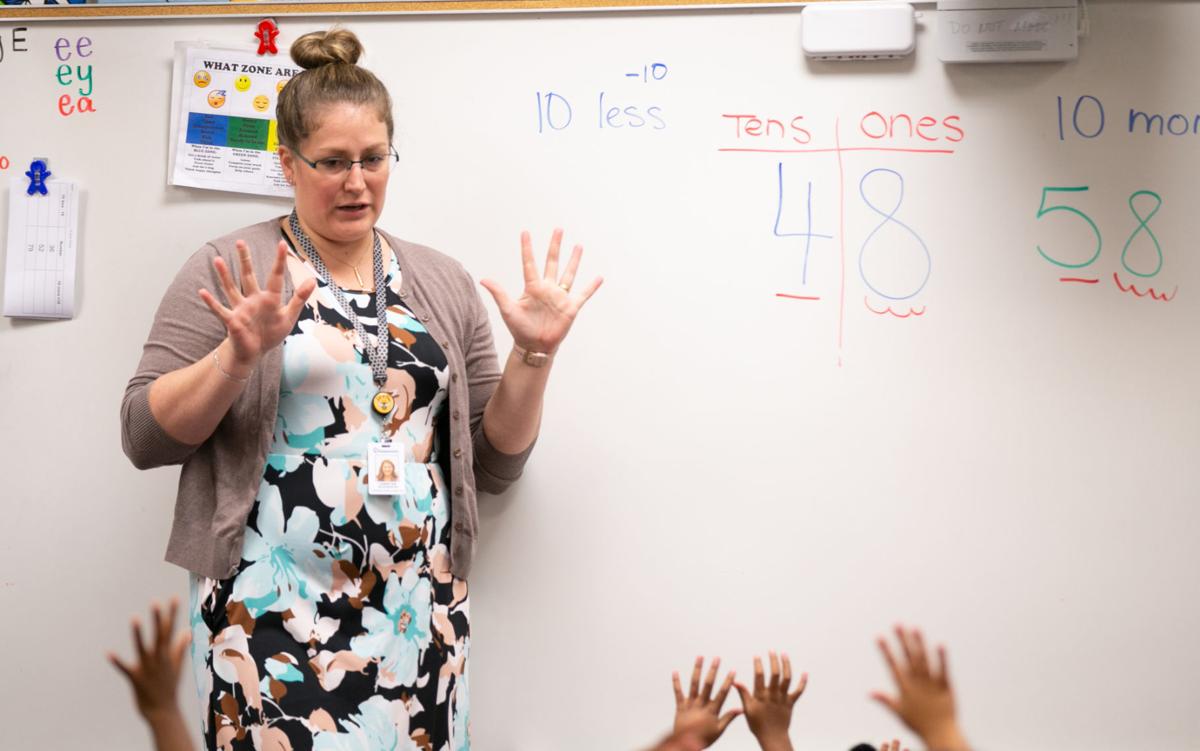 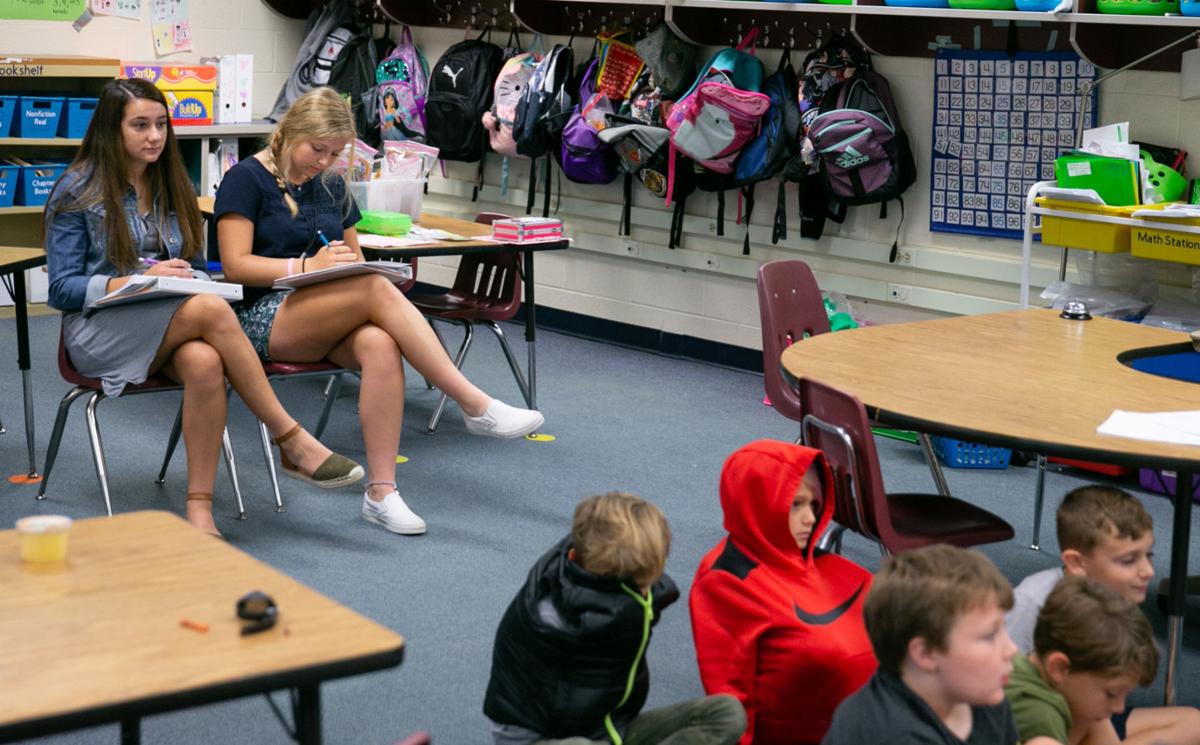 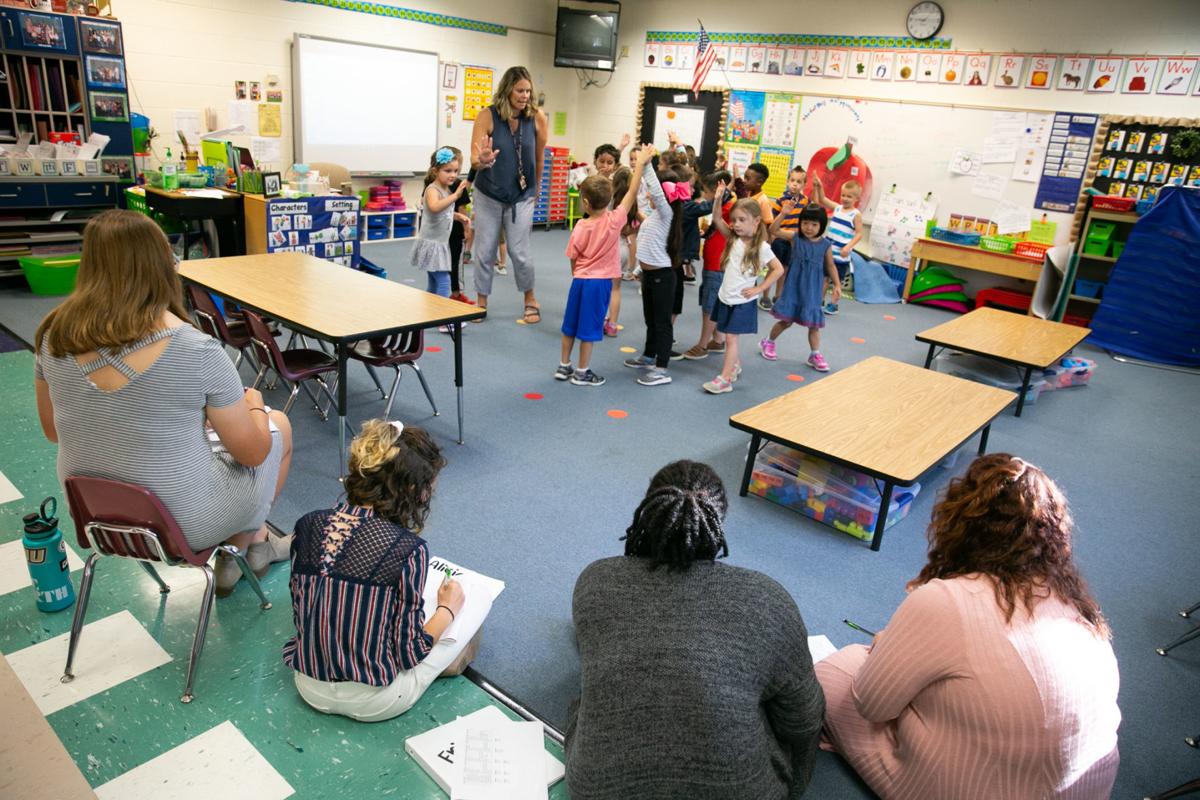 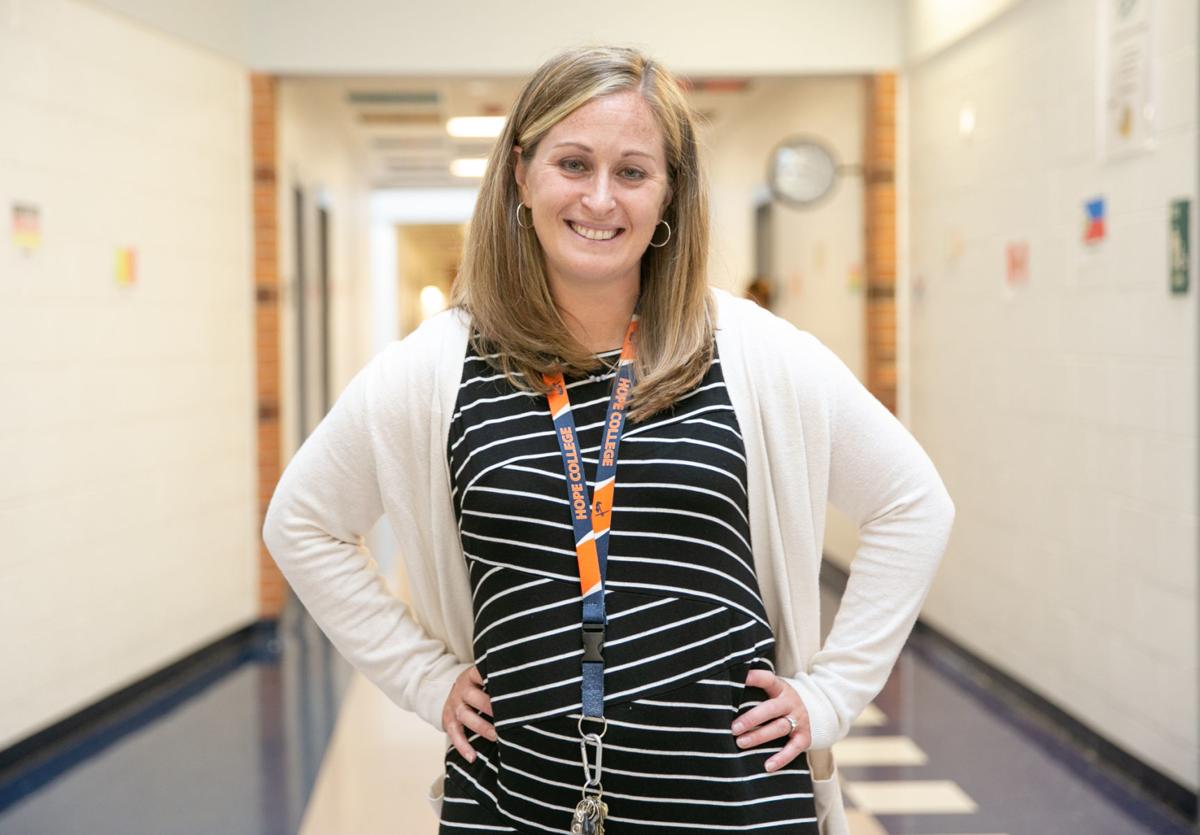 Rebecca Waurio, who has been a teacher for 16 years, leads Spotsylvania’s Future Educators Academy.

Rebecca Waurio, who has been a teacher for 16 years, leads Spotsylvania’s Future Educators Academy.

Spotsylvania County high school senior Brooke Patten has known since kindergarten that she wants to be a teacher when she grows up.

“I was always that kid who wanted to teach everybody else how to do things,” Patten said with a laugh.

Classmate Catie Cauger had a similar experience, growing up spending time in her mom’s preschool class.

“I always loved seeing how excited the kids were when they learned how to write their names, how excited they were to learn something new,” Cauger said. “And I wanted to be a part of that.”

Now, as some of the first 17 students in Spotsylvania County Public Schools’ new Future Educators Academy, they will get hands-on classroom experience much earlier than many teacher hopefuls.

They are also getting their eyes opened to some of the challenges teachers face.

“We talk about teacher pay issues and the teacher shortage all the time in class,” Patten said. “It’s definitely something to keep in mind. But we all already knew it was going to be an issue.”

Cauger said, “It’s just something we’ll have to work around if we’re the primary breadwinners.”

Their classmate, Emma Bernard, called it “the sad truth.”

“But I can’t see anything changing my mind [about wanting to be a teacher] at this point,” she said.

The Future Educators Academy is in its first year in Spotsylvania. It draws students from all five county high schools to Chancellor High School for two block class periods every other day.

Time spent in class learning about child development and approaches to teaching and lesson planning is interspersed with time spent observing and helping out in classrooms at nearby Harrison Road Elementary and Chancellor Middle schools, as well visits to teacher education programs at the University of Mary Washington and Shenandoah University in Winchester.

Shenandoah University has partnered with Spotsylvania to offer the program and gives students the chance to earn dual-enrollment credits from the university.

The Future Educators Academy uses the Teachers for Tomorrow curriculum, which was developed by the Virginia Department of Education.

According to Charles Pyle, spokesperson for the VDOE, the goal of Teachers for Tomorrow is to recruit high school students to the teaching profession, “in keeping with the challenge to increase the pool of highly qualified teachers.” It is one of the strategies the state is using to meet a teacher shortage that is growing more acute.

Peter Kelly, dean of UMW’s College of Education, said the shortage has been growing for the past 10 to 12 years and is caused by problems in both recruitment and retention of teachers.

Kelly said there has been a 40 percent drop in the number of students enrolling in teacher education programs over the past decade. In addition, one out of every five new teachers will leave the profession within the first five years, Kelly said.

VDOE Region 3, which includes Fredericksburg and Spotsylvania, Stafford, Caroline and King George counties as well as the Northern Neck, is the region with the second highest percentage of unfilled positions—1.49 percent—according to a 2017 report by the VDOE Advisory Committee on Teacher Shortages.

“Superintendent’s Region 3 [Northern Neck] is facing one of the most severe shortages, both in percentages of their total workforce and in sheer numbers,” the report states.

Fredericksburg schools have five vacancies in its 301 licensed positions and Stafford has nine out of 2,090.

He said he doesn’t think “shortage” is the right way to describe the problem.

“You wouldn’t try to buy a Porsche for $1.98 and call that a Porsche shortage when you’re not successful,” he said, quoting a Sept. 5 Forbes magazine article about the teacher shortage. “If people are not willing to work under a certain set of circumstances, that’s not a shortage.”

Kelly said the UMW College of Education feels “a responsibility” to address the teacher shortage.

“Our ability to train teachers is related to the success of the schools where we’re placing our students,” he said. “We have a responsibility to work together to help each other.”

While Kelly said there is not much schools of education can do to address the teacher pay issue, there are strategies they can employ to increase the number of teachers and bring respect back to the profession.

“Somewhere along the way, we lost value for the job teachers do,” Kelly said.

Some of the strategies include creating strong mentorship programs for new teachers and building local pipelines between schools of education and school divisions.

“If we can do these things, I think we’re in a position to help move the needle,” Kelly said.

UMW receives a grant from the VDOE to train existing and experienced teachers to be effective mentors to new teachers, which Kelly said can help new teachers stay in the profession.

And programs such as Spotsylvania’s Future Educators Academy are designed to create two-way pipelines between school divisions and local colleges of education.

“A lot of these kids have the intention of going to a local school [of education],” said Rebecca Waurio, who teaches the Future Educators course at Chancellor High School. “Having this experience gives them connection to the local school divisions and builds community, which helps draw them back in to teach.”

Kelly said research shows that having teachers who feel “rooted to a place” will help the retention issue.

“Sixty percent of teachers teach less than 20 miles from where they graduated,” he said.

Teachers for Tomorrow, the program used by the Future Educators Academy, was first piloted by the Virginia Department of Education in 2002–03, with 83 high school students in five school divisions.

VDOE published the statewide curriculum in 2012 and by the 2017–18 school year, 1,800 students in 51 school divisions were enrolled in Teachers for Tomorrow. The state does not track how many of those get jobs as teachers.

James Monroe High School in Fredericksburg plans to begin offering the program in the 2020–21 school year.

Waurio, a 16-year teacher, said she “doesn’t even have words” to describe how well she thinks the program is going in Spotsylvania.

“It’s reinvigorated my perspective on education,” she said. “These kids have an amazing attitude, they’re good critical thinkers and they have a real passion for teaching—at 17 years old! They’re so excited to be in [classroom] environments.”

The Spotsylvania students visited UMW’s College of Education and said it was “very welcoming.” Bernard said she wants to go there already.

By the time they enroll, the timeline to becoming a licensed teacher through UMW will have accelerated, Kelly said.

“Teachers will graduate with less debt and get into the job faster,” Kelly said.

UMW has developed a new bachelor’s degree in elementary education for students who want to teach at that level.

Students who want to teach in secondary schools or in subjects such as art and music that span all grade levels will continue to get undergraduate degrees in their chosen discipline and “aim their elective courses to the state certification mandates,” Kelly said.

The programs are waiting on state approval, Kelly said. Graduates will then work on their master’s degrees in the fifth year, taking classes on a flexible schedule while teaching.

Spotsylvania Superintendent Scott Baker said the division has been preparing to offer the Future Educators Academy for the past two years.

“When I ask schoolchildren what they want to be when they grow up, I always get at least a couple who say they want to be teachers,” Baker said. “We want to start building that passion early.”