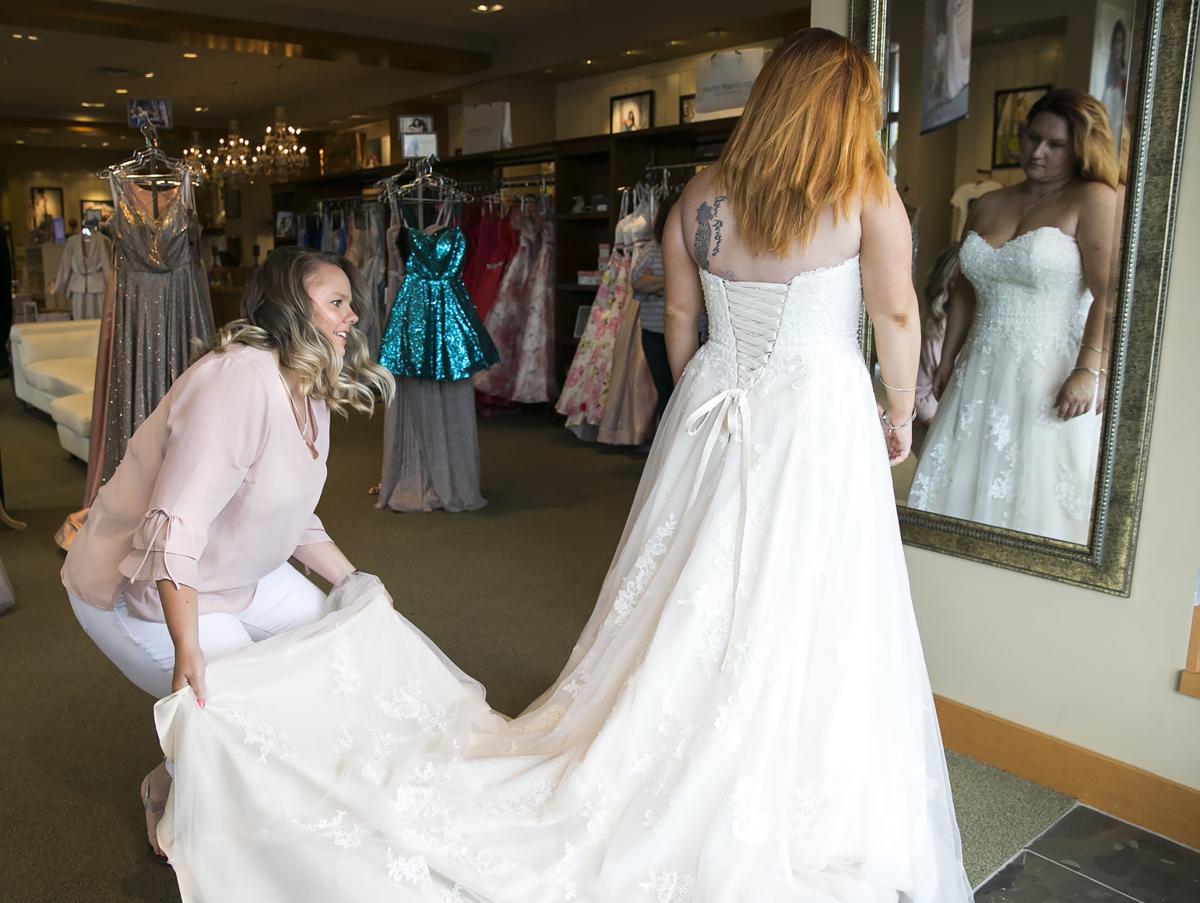 Kristal Ellsworth helps Amber Madden at That’s My Dress, where the Spotsylvania teacher works as a consultant. 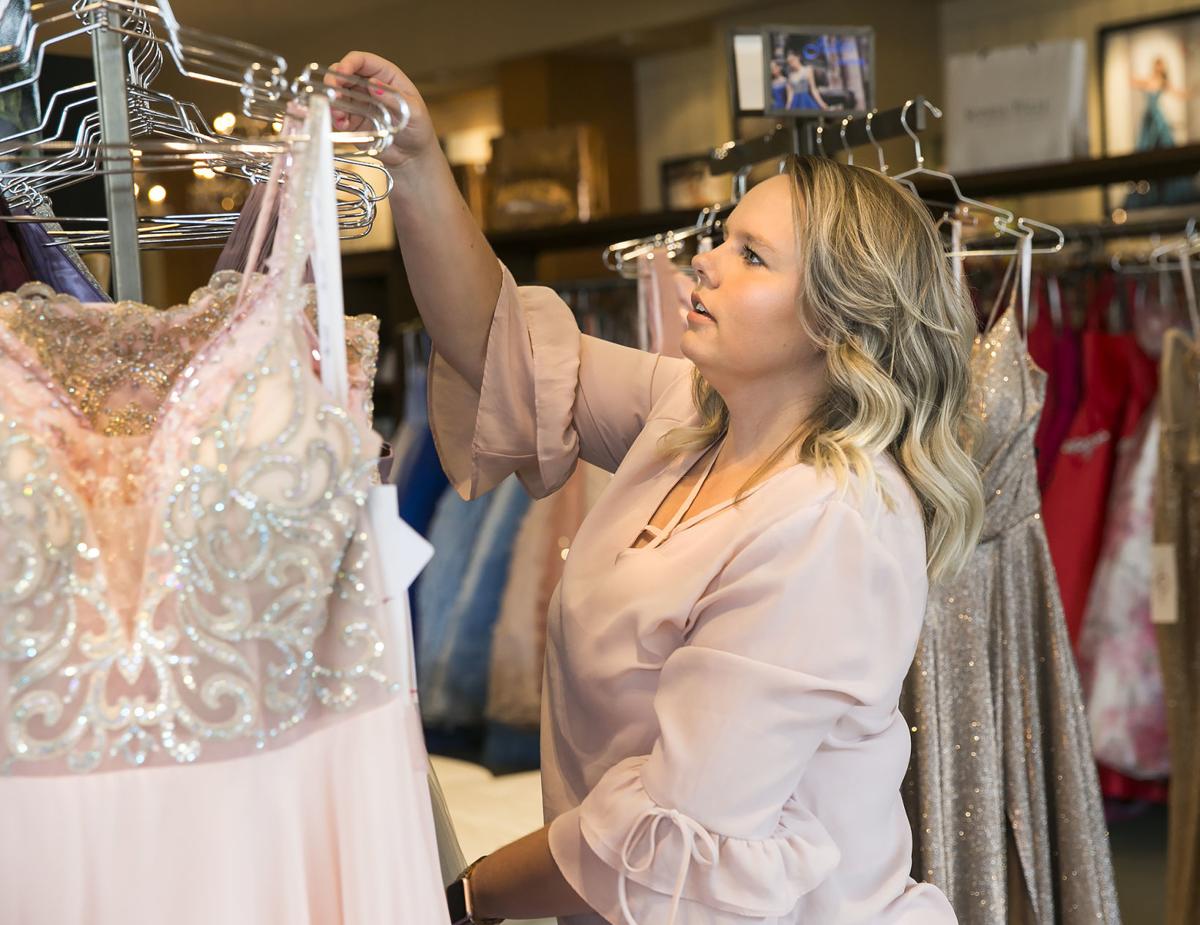 Ellsworth, a second-grade teacher, goes from working four jobs to ‘only’ three during the summer months.

Kristal Ellsworth helps Amber Madden at That’s My Dress, where the Spotsylvania teacher works as a consultant.

Ellsworth, a second-grade teacher, goes from working four jobs to ‘only’ three during the summer months.

But not because she gets to spend the long, hot days relaxing by the pool or at the beach. It’s because during the summer months, she goes from working four jobs to “only” three.

“Actually, I look at teaching as being like two jobs, so it feels like I’m going from five jobs to three jobs,” she said.

Ellsworth, 29, will start her eighth year as a teacher for the Spotsylvania County school system in August. She taught first grade at Courthouse Road Elementary for seven years and will teach second grade at the same school this year.

In addition, she works as a manager at BJ’s Brewhouse in Central Park, as a consultant at the bridal shop That’s My Dress in Spotsylvania Towne Centre and as a Mary Kay saleswoman.

Ellsworth said most other single teachers she knows have multiple jobs—though no one else has as many as her.

“It’s sad. I wish I just had one job and could do it well,” she said. “Sometimes I feel so stretched thin that it’s like I’m cheating my kids.”

But, she said, “I’m not in this profession for the money. It’s for the love of teaching.”

Ellsworth grew up in Flint, Mich., as an only child in what she calls a “low-middle-class working family.”

Her father is a bus mechanic and her mother is a special education para-educator, both for the Flint public school system that Ellsworth attended.

“It’s all I ever wanted to be, and I carried that out,” she said.

When she graduated from high school, she became a first-generation college student, earning her bachelor of arts degree from Central Michigan University. Ellsworth’s parents weren’t in a position to pay for her college education, so she took out loans for an associate’s degree and then her bachelor’s.

After college, she applied for teaching jobs near home, but didn’t hear back from any of them.

“There’s so much poverty in Flint, and with the water crisis, people were moving away,” she said.

On the suggestion of an aunt who lives in Spotsylvania, Ellsworth applied for an open teaching position with Stafford County Public Schools. She did a phone interview and was offered a job an hour later.

Ellsworth moved to the area in 2011 and taught for a year at Widewater Elementary.

The following year, she transferred to Courthouse Road Elementary—because the commute from Spotsylvania up Interstate 95 was wearing her down—and enrolled in a master’s degree program at George Mason University. In 2015, she graduated with a degree in math education.

Ellsworth said teaching is a craft, and she wishes it could be taught through an apprenticeship program or in a trade school setting.

“But they want a bachelor’s degree and a master’s degree, so I went and did what they told me to do,” she said.

It meant taking out yet another loan.

In the meantime, Ellsworth said her credit card debt was creeping higher and higher because she was “trying to do it all by herself.”

“But Virginia is so expensive,” she said.

After a year in the state, she found a roommate, which alleviated some of the burden of rent. But then the roommate moved away and Ellsworth was back by herself.

“And that is why I have the four jobs,” she said.

Ellsworth’s monthly take-home teacher salary is $2,800. Teachers get paid once a month, “which is a lot of budgeting right there,” she said.

Rent is $1,200 a month and her loan payments are $140 a month, because she’s on an income-based repayment plan.

Ellsworth got the job at BJ’s Brewhouse two years ago when the restaurant opened in Central Park. She works there every day during the summer and on Friday and Sunday nights during the school year.

She works at the bridal shop, which her aunt owns, every Saturday.

Between those two jobs, she brings in $600 a month during the school year and $1,200 during the summer.

During the school year, Ellsworth said she spends about 60 to 70 hours weekly on her teaching job. She is compensated for her contracted hours of 8:20 a.m. to 3:50 p.m.—not for any of the time she spends on lesson-planning, grading or the 180 professional development hours teachers are required by the school division to complete every five years for renewal of their teaching licenses.

It doesn’t leave her much time for a life.

“It would be nice to have that extra help [from a spouse or partner] to lessen the load,” she said. “At the dress shop, I’m never going to meet anyone. That’s why I took the BJ’s job. It’s a great opportunity to meet people.”

Her friends have told her she should try to buy a house, because a mortgage might be more affordable than rent.

“But I don’t qualify for any mortgages because I have too much student loan debt,” Ellsworth said.

Still, Ellsworth said she has never thought about quitting the teaching profession.

She would like to eventually become a math specialist, helping teachers learn how to teach math, and her ultimate goal is to supervise the math curriculum for the entire school division.

In teaching, Ellsworth said she’s found a job that doesn’t feel like a job.

She loves the growth that happens to children during their first-grade year, the way that learning how to read opens new worlds for them. And she loves the times she’s able to forge personal connections with her students.

“I had a little boy this year whose home life was not great,” Ellsworth said. “Every day he’d come in and eat breakfast at his desk and I’d try to build him up, telling him, ‘We’re going to have a great day.’

“At the end of the school year, he was sitting on my lap and he looked at me and said, ‘I wish you could adopt me.’ I just started sobbing.”

Being there for kids like that little boy is so important to Ellsworth that it outweighs the discipline problems, like when a student in her class this year kicked her so hard that she sprained her ankle.

She spoke before the School Board during budget negotiations this year, when Spotsylvania schools Superintendent Scott Baker proposed a 5 percent salary increase for all teachers.

But when that increase was eventually lowered to 4 percent, after cuts had to be made to balance the school division’s budget, she wasn’t that bothered.

“You don’t go into teaching for the money,” she said.

Still, every time she tells customers in the restaurant what her full-time job is, their response is, “Oh, bless you. It’s such a thankless profession. You should get paid more.”

“If that’s what everybody thinks, why hasn’t it happened?” she said.

Nationally, the average salary for public school teachers was $58,950 in 2016–17, according to the National Center for Education Statistics. When adjusted for inflation, the average teacher salary is actually 2 percent lower than it was in 1990-91.

According to data from the National Education Association, when teacher pay in Virginia is adjusted for cost of living, it is 8 percent less than it was in 1999–2000. Only five states had sharper declines, and two of them are Arizona and West Virginia, where teachers this year went on strike.

Teachers across the country mobilized under the Red For Ed movement, which advocated for increased funding for public schools and better compensation for teachers.

Locally, the school divisions in both Stafford County and Fredericksburg approved 5 percent raises for school employees.

Ellsworth hasn’t seen her 4 percent raise yet. She expects it will show up in her September pay check. When it does, she has no plans to quit any of her additional jobs—not until she qualifies for the Public Service Loan Forgiveness program in four years.

Ellsworth said she well remembers how strange it seemed to her as a kid to run into her teachers out of school.

“I think most kids think their teacher lives in the classroom,” she said with a laugh.

As a teacher now, Ellsworth gets that same reaction when she runs into her students out of the classroom, and she finds it funny. But she said she gets the same reaction from parents—and that bothers her.

“I feel like teachers are put on a pedestal, and I wish people would realize that we are real people too, trying to survive just as much as they are,” she said.