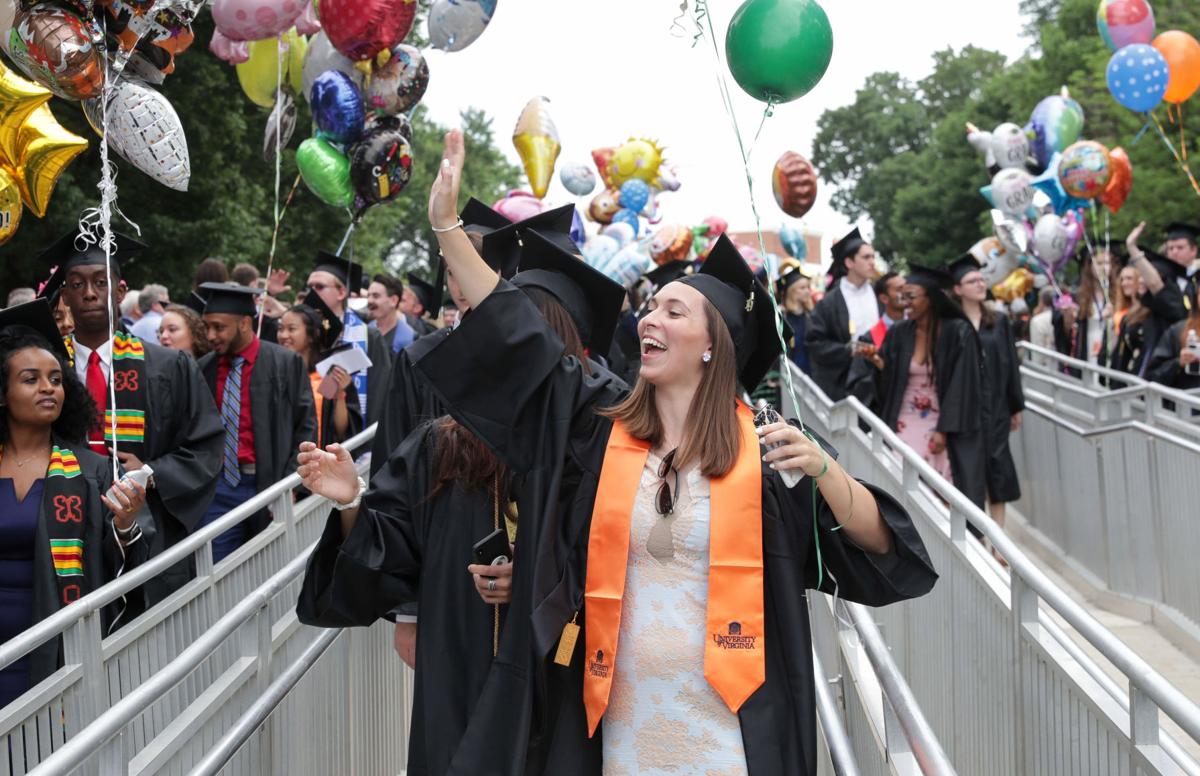 Graduates from the College of Arts and Sciences walk the lawn during the 2019 graduation ceremony at the University of Virginia. The ceremonies this year have been canceled as originally planned in response to the outbreak of COVID-19. 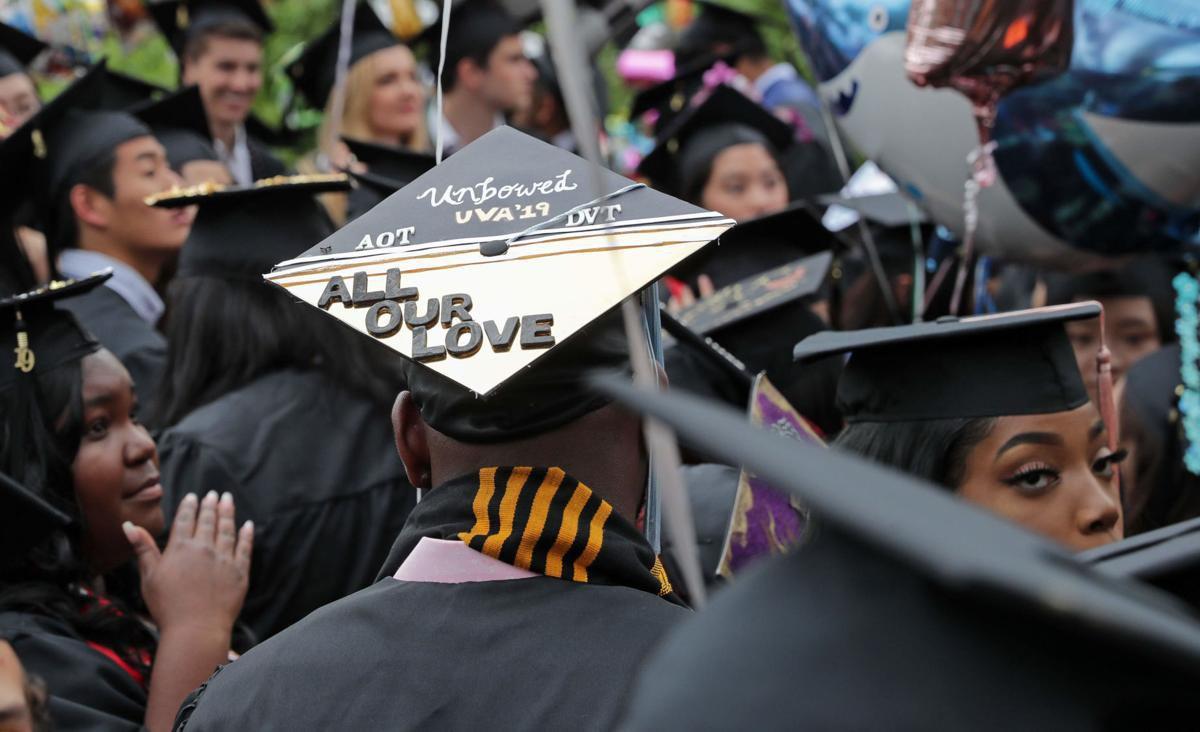 ANDREW SHURTLEFF/THE DAILY PROGRESS Members of the University of Virginia Class of 2019 listen during Final Exercises.

Graduates from the College of Arts and Sciences walk the lawn during the 2019 graduation ceremony at the University of Virginia. The ceremonies this year have been canceled as originally planned in response to the outbreak of COVID-19.

ANDREW SHURTLEFF/THE DAILY PROGRESS Members of the University of Virginia Class of 2019 listen during Final Exercises.

The University of Virginia’s decision to cancel the planned Final Exercises devastated students hoping to celebrate the milestone in front of friends and family and dealt another gut punch to area businesses already reeling from ramifications of the COVID-19 outbreak.

President Jim Ryan clarified Wednesday that the university is looking into “creative alternatives” for the annual ceremonies, which could include holding Final Exercises, which had been scheduled for May 16 and 17, at a later date.

“We know how important this ceremony is to our students and families, and we will do our very best to figure out a good solution,” Ryan wrote.

An online petition signed by hundreds of students and community members called on the university to just postpone Final Exercises, in addition to several other demands, such as offering all staff members paid sick leave, offering students who have had to leave campus housing storage options, offering rebates for campus housing, extending academic accommodations and continuing to pay student workers. UVa addressed some demands Tuesday, when it said work-study students would continue to be paid and unused dining fees could be rebated, but students on Wednesday requested further accommodations.

“Walking across the Lawn for Final Exercises at the end of one’s UVa career is an experience that can simply not be emulated,” students wrote, though they said they understand the ceremonies should not occur during the pandemic. “There is no creative alternative that can mark this momentous day for graduating students in the same capacity.”

In previous years, UVa has expected more than 30,000 people for the weekend celebration. Area hotels sell out and restaurants fill up.

Elizabeth Cromwell, president of the Charlottesville Regional Chamber of Commerce, said the chamber is prepared to advocate for and connect with business owners to help them recover from this crisis.

“While we completely understand the university’s reasoning for the cancellation and agree it’s in the best interest for the population’s physical health, the result is nonetheless devastating to the health of our business community,” she said.

Courtney Cacatian, executive director of the Charlottesville Albemarle Convention and Visitors Bureau, hopes the university will figure out how to hold graduation later, rather than cancel it entirely.

“UVa’s graduation is one of the biggest revenue generating weekends of the year,” she said. “It sets the tone for how we’ll do over the summer. It affects hotels, stores and other businesses.”

Cacatian said that not only do hotels sell out, but they also sell at higher rates.

“It’s one of the most expensive weekends to visit,” she said.

The loss of lodging taxes from that weekend would be felt immediately by local governments, Cacatian said.

“There are so many different ways that this one weekend ends up impacting a lot of different business,” she said.

The CACVB board of directors is having an emergency meeting at 10 a.m. Monday to discuss the COVID-19 crisis.

Students who are still trying to figure out how to transition to online classes — some without internet and some from different timezones — say they wish they had more time to grieve the loss of an important milestone.

Jesse Walther, a fourth-year psychology student, said she was celebrating St. Patrick’s Day at home with her boyfriend when she got the email from the university notifying her that Final Exercises were canceled.

“It just spun my world upside down,” she said, adding that while she is confident close friends will keep in touch, she’s sad about the loss of new friendships that were just starting to form, and of friends who will likely go overseas and not be able to return for a postponed graduation.

Walther also said that she lost one of her on-Grounds jobs due to the shutdown, and now has to work full-time at her other job to pay bills in the midst of figuring out the transition to online.

“I am the first in my family to go to college, let alone graduate, and now none of them will be able to witness that, which is crushing,” Walther said, “If I even still earn my degree with this semester’s transition being so difficult. I am at school on a full-ride scholarship and I’m not someone who can just ‘take another semester’ to keep up.”

On Wednesday evening, University of Virginia Provost Liz Magill announced that undergraduates courses will default to a credit/no credit, or pass/fail grading system. Students will have the option to receive a letter grade, Magill said in a release. Credit/no credit courses will count towards graduation, major and curricular requirements, but will not be factored into a students GPA, according to the release. Students in credit/no credit grading must earn a C or better average to pass.

The change does not affect graduate programs, the release said. A decision by the deans of UVa’s graduate and professional programs will be announced later.