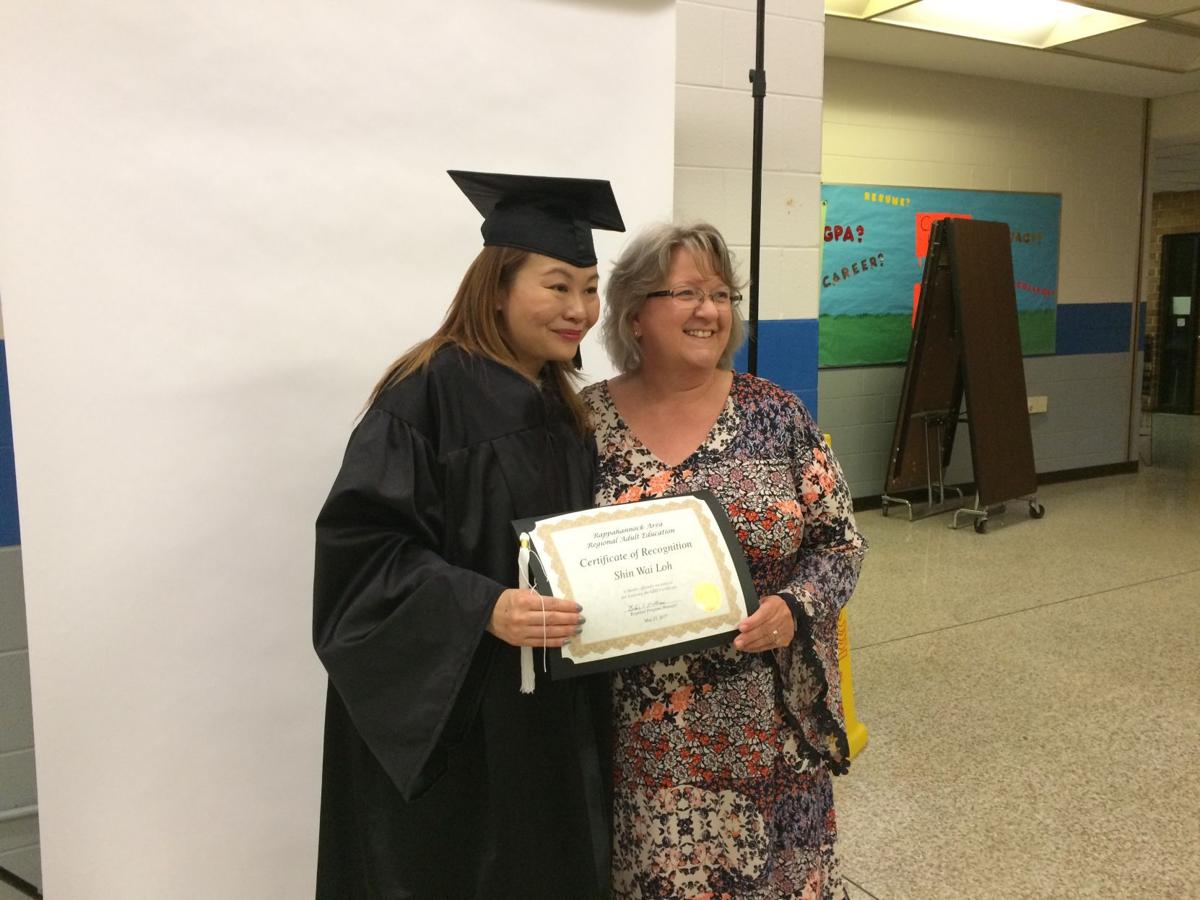 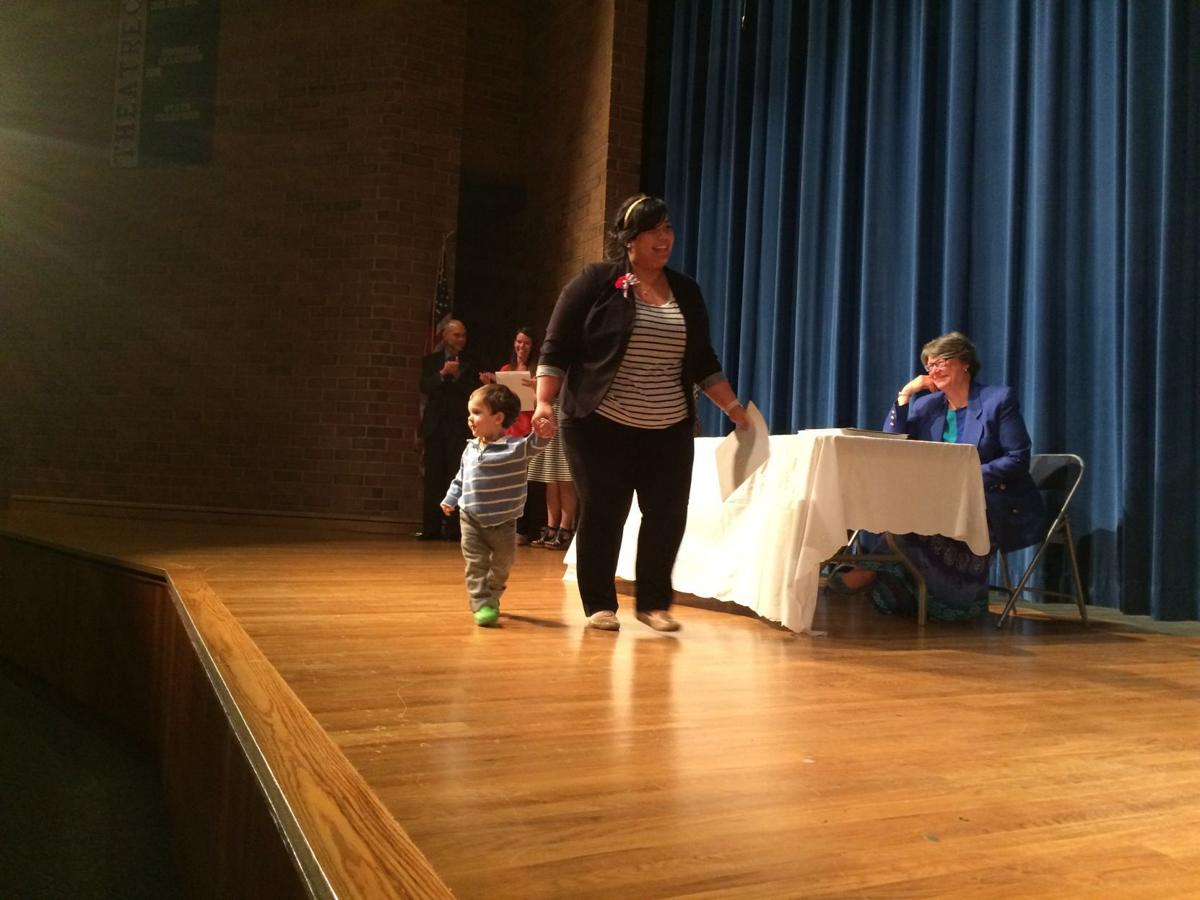 Maranatha Servais crosses the stage at Courtland High School with her son Mason, 1, after accepting her GED diploma at the Rappahannock Area Regional Adult Education graduation May 25. 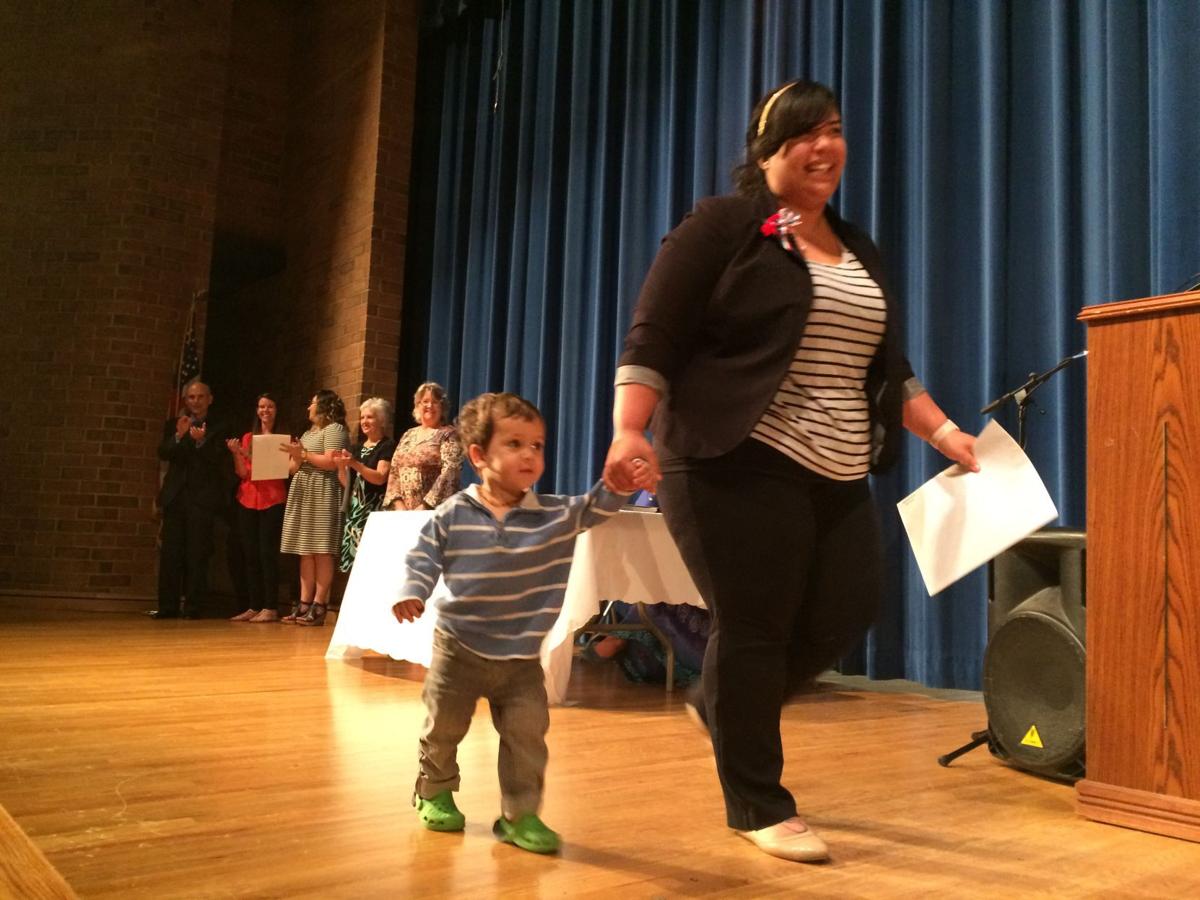 Maranatha Servais crosses the stage to accept her GED diploma with her 1-year-old son, Mason.

Maranatha Servais crosses the stage at Courtland High School with her son Mason, 1, after accepting her GED diploma at the Rappahannock Area Regional Adult Education graduation May 25.

Maranatha Servais crosses the stage to accept her GED diploma with her 1-year-old son, Mason.

The small child’s shout rang out as Mindy Smith walked across the stage at her graduation.

Maranatha Servais’s 1-year-old son, Mason, clutched his mother’s hand as she accepted her certificate from her instructors.

Valerie Avington’s high-school-aged children applauded for their mother as she crossed the Courtland High School stage and grey-haired Robert Huntington got friendly slaps on the back from his classmates when he returned to his seat.

These students were among the 46 who graduated Thursday with their GED certificates from Rappahannock Area Regional Adult Education. They ranged in age from their 20s to their 60s. Many were born in countries outside the U.S., from Mexico to Malaysia.

“All of us are so proud of you,” said program manager Betsy Mathias.

She is especially proud because the battery of tests required for a GED certificate is harder than it used to be. In January 2014, GED Testing Service introduced a new exam that was designed to meet the more rigorous standards expected of high school graduates and better match the skills needed in today’s workplaces.

“January 2014—the day that will live in infamy,” Mathias said.

“There’s more reasoning now,” Mathias said. “You can’t just be a good test-taker to pass it. And it’s hard for those who aren’t native English speakers. Bottom line, it’s a whole lot harder.”

RARAE used to graduate between 200 and 250 students a year before the new test, Mathias said. Only 12 graduated the first year after the revised test.

Growth has been gradual since then as students grow accustomed to the new standards.

For some of the graduates, obtaining their GED credentials was a literal gift.

“[Enrolling in RARAE] was my Christmas present to myself,” said Avington, who told her story at the graduation ceremony.

Twenty-two years ago, she said, she was prepared to walk at her high school graduation but was told at the last minute that she was two credits shy of the number required to graduate.

“Shame came over me,” she said. “I never even told my mom what had happened.”

She tried to put school behind her. She got married, traveled all over the world as an Army wife and raised four children. She supported her children as they went through school—the oldest is now in college—and her husband as he studied for a doctorate. Finally, she decided it was time to invest in herself.

Amber Hayes, a 34-year-old mother of two from Spotsylvania County, wanted her GED diploma so she could be the best possible role model to her children.

“I kind of felt like, how could I tell my kids they needed to finish school if I didn’t?” she said.

She said she left high school because she wanted to work and “have money in my pocket,” but now she would tell her own children to stick it out.

“Live out the experience of finishing high school and going to college and being young and enjoy that part of your life because you have the rest of your life to be an adult,” she said.

Hayes is a certified home health aide and works in the field, but the lack of a high school degree was keeping her from progressing. Now, she plans to become a certified nurse aide.

The GED diploma is also a stepping stone to career progress for Edwin Flores, 52. The schooling he completed in Mexico, which included a civil engineering course, did not transfer when he moved to the U.S. 30 years ago. He became a U.S. citizen and worked in construction. Recently, his company, Southland Concrete, offered to promote him to a management position if he went back to school.

His company promoted him and he is now leading a job at the construction site of the National Museum of the U.S. Army.

“I’m giving something back to the veterans of this country, which is my country, too,” Flores said.

For Shin Wai Loh, 42, who immigrated to the U.S. from Malaysia two years ago, the RARAE program helped her feel at home in her adopted country.

“I felt so lost,” Loh said. “I knew nobody. I almost came to a depression.”

Her aunt, who was present Thursday night, told her about adult education programs and persuaded her to enroll, even though Loh thought she was too old.

“It’s never too late,” her aunt Lillie told her.

Loh faced her fears and found a mentor in RARAE instructor Donna Adams. She worked hard, passed the test and decided to return as a math and science tutor to other students.

“I feel there are so many ESOL students trying to adopt to this culture and they do not know how to start,” she said. “I know how it feels. I want to help them grow their self-esteem. It is never too late to achieve something.”