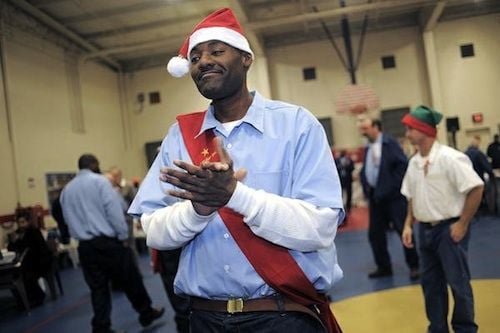 Jeryl McCoy with the Veterans Outreach Group at Haynesville Correctional Center, looks on as the needy family the group sponsored opens its gifts Friday. 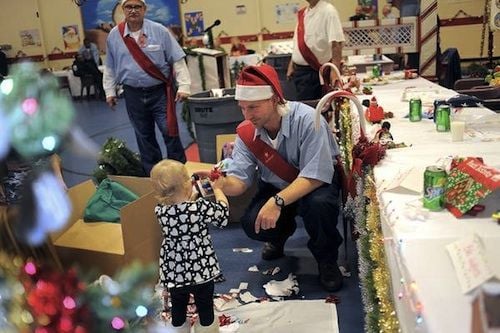 Ronald Brown of the Veterans Outreach Group at Haynesville Correctional Center on the Northern Neck, helps a young girl figure out her gifts during Friday’s 20th annual ‘Project Joy’ benefit program at the center. / Photos by Suzanne Carr Rossi

Jeryl McCoy with the Veterans Outreach Group at Haynesville Correctional Center, looks on as the needy family the group sponsored opens its gifts Friday.

Ronald Brown of the Veterans Outreach Group at Haynesville Correctional Center on the Northern Neck, helps a young girl figure out her gifts during Friday’s 20th annual ‘Project Joy’ benefit program at the center. / Photos by Suzanne Carr Rossi

HAYNESVILLE—Colorful packages sit in a jumble be-neath a Christmas tree wrapped in gold garland. Friends embrace, some wearing Santa hats, and sing timeless carols. It’s a heartwarming celebration not unlike many others unfolding in this Northern Neck town 60 miles from Fredericksburg.

But between these festivities and the free world stand razor-wire fence and three armed security checkpoints. It’s Christmas at the Haynesville Correctional Center in Richmond County, and the 20th year of “Project Joy,” when inmates and members of the Veteran’s Outreach Group (VOG) gather to brighten the lives of a family in need with a hearty dinner, gifts and the feeling of being valued.

“It’s as much of a blessing for us as it is for the family,” said inmate Donald Young. “It’s as close as we can get to being with our own family.”

About 75 inmates participate in VOG. Through the year they organize patriotic events for the prison population to honor Memorial Day, July Fourth, Veteran’s Day and more. But Project Joy is their biggest effort.

Beginning early each summer, inmates work with program sponsor Edie Hudgins, the Center’s assistant librarian. Hudgins meets with a selected family referred by local social service agencies to find out what they need. This year, among the many wrapped packages, three large boxes stand next to the Christmas tree. They hold space heaters since Hudgins learned the single mother and her four small children had no heat.

With limitless energy, Hudgins has sponsored VOG for six years. She said her father, a veteran of the Marine Corps, is the reason the group is so important to her. “I was brought up with the love of God, country and corps,” she said. “Something I’ve always loved is the military.”

She knows how important Project Joy is not only to the honored family, but for the men of VOG.

“This is their Christmas. Seeing quote-unquote hardened criminals take part in something like this, you see they’re human beings. There but for the grace of God is what I always say.”

The Rev. Ralph Gardiner of Holy Redeemer Anglican Church established the group in 1993, the same year the center opened. He was counseling inmates for drug and alcohol abuse and recognized a need for veteran assistance. Gardiner, who served in the Air Force and Navy, retired in 1989 as a master chief petty officer. He and the inmates had an idea to help “a family in need of some compassion.”

To raise money, they sold doughnuts, and later, pizza. When another prison was discovered to have had drugs smuggled in by using food, VOG was told it could no longer sell food.

So participants got a camera and sold photographs. They also began requesting donations, and thanks to the area businesses, individuals and churches that pitched in, the first Project Joy took place that year—1993.

“Not only do these veterans benefit someone else, but they benefit themselves,” Gardiner said. He believes that veterans who participate are less likely to return to prison. “They attribute their new life to what they learned here.”

Inmate Young agrees. In October, he graduated from Rappahannock Community College with an associate’s degree along with 18 other inmates, six of whom are members of VOG.

“When you get involved in a program like this, you get to see what you’re capable of,” he said. “It’s like seeing the outside world. You get to choose. Do you want this?” gesturing at the prison walls, “Or do you want freedom?”

Inmates cannot receive government grants for college. The college program at Haynesville is largely funded by Doris Buffett’s Sunshine Lady Foundation. Young started too late to take advantage of funding, so he paid for his first semester from wages he earns repairing sewing machines in the center’s shirt-making operation. At graduation, he had a 4.0 grade-point average.

Last Friday night, Project Joy was a fluid system of coordination and cheer. The decorating committee made up of inmates had turned the gymnasium into a seasonal tableau. Other inmates ushered guests to their seats and later, another group served dinner. Each of the nine officers wore a red honor sash. The president, inmate Kenneth Scott, was master of ceremonies. At a table honoring POW–MIAs, an inmate stood at attention throughout the evening, exchanging duty at intervals so that the table was constantly attended, much like the Tomb of the Unknown Soldier.

Five inmates led a flag service and presented the folded flag to the mother of this year’s family. She works as a nursing assistant but has struggled lately, since one of her children requires frequent medical treatment for traumatic birth injuries.

As Christmas music filled the gym, the children ripped into their gifts. Their timid smiles grew broad and were nearly matched by those of the VOG officers standing nearby. Members watched from their seats. Many of them personally donated to the gift fund.

“They donate from their own money from the wages they earn making shirts, a wage that’s pretty negligible,” said inmate Robert Garnett. Garnett was named for his uncle who was killed during WWII. “In giving, you receive. It’s not just about this family. These guys get so much from this program. It shows we’re worth something. We became misdirected. But now we have a better direction.”

“You’ve worn the cloth of the nation,” he tells the inmates. “You’re already showing that you care about helping someone else and about being part of something bigger than yourself. You still have worth as an individual.”