By a show of hands, King George County residents show their approval of a resolution to make the county a 2nd Amendment sanctuary locale on Tuesday, Dec. 3, 2019. Members of the Board of Supervisors heard public comments regarding the issue at this week's board meeting. 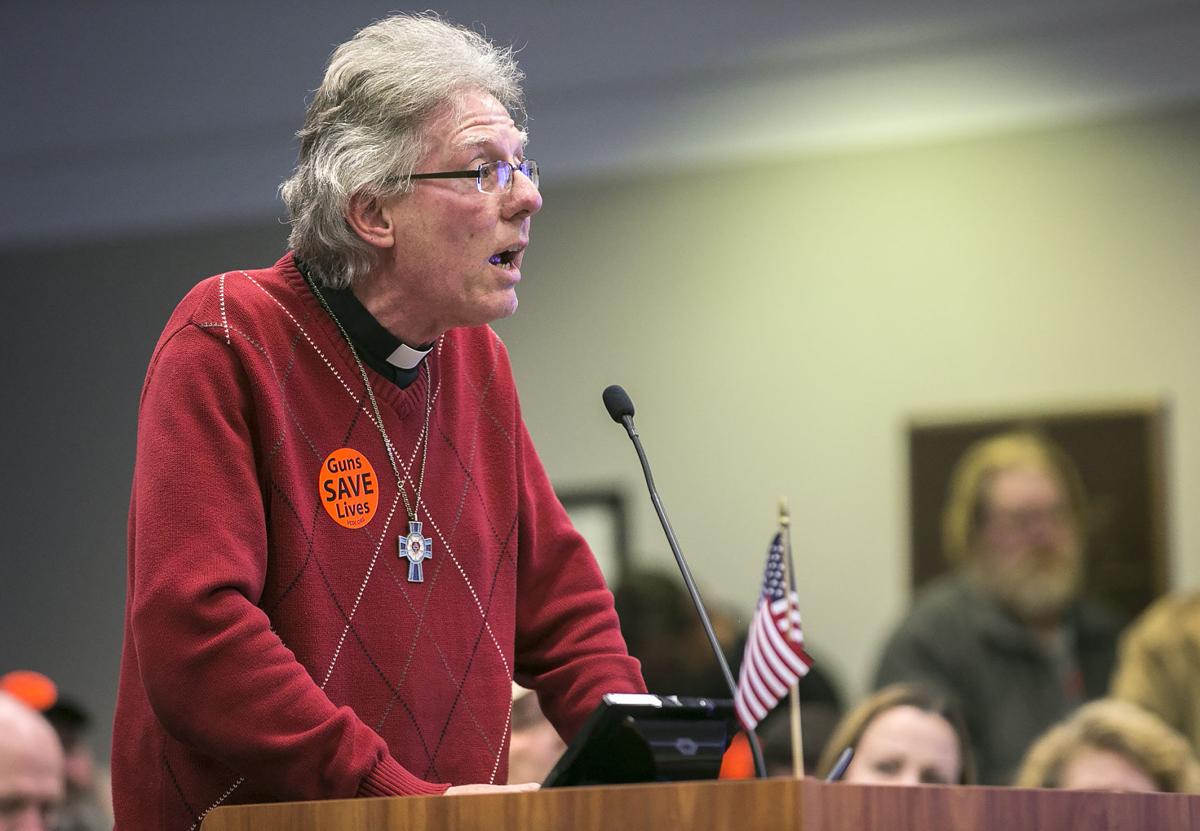 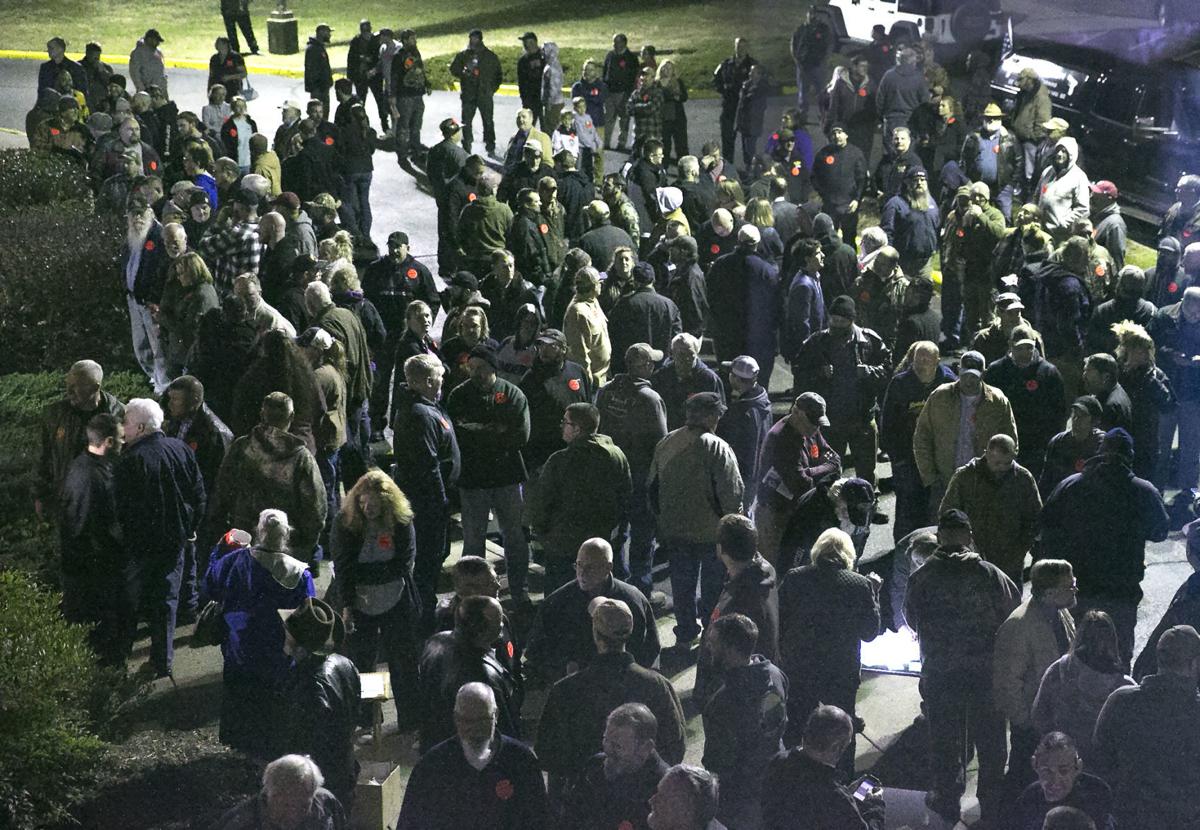 Several hundred people stood outside the King George meeting room, in the cold, for 2.5 hours until the supervisors passed the resolution making the county a Second Amendment sanctuary on Tuesday, Dec. 3, 2019. 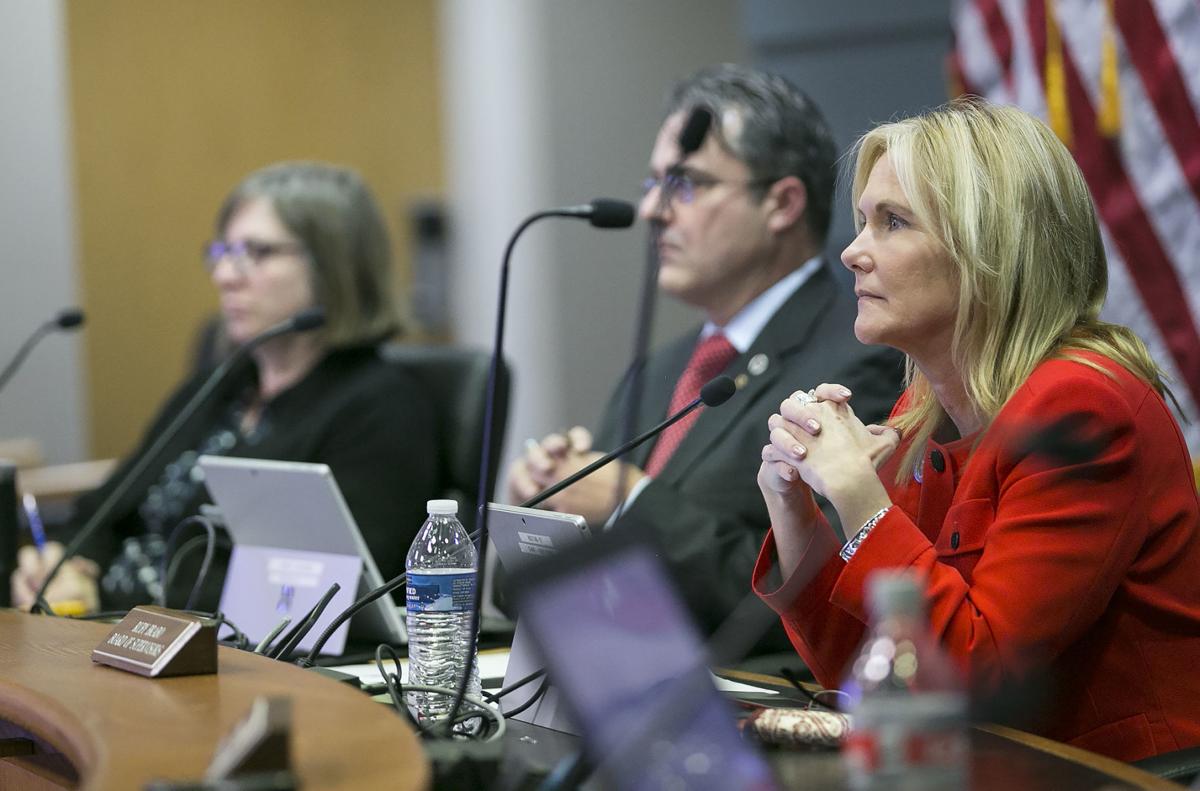 From left, supervisors Cathy Binder, Chairman Jeff Bueche and Ruby Brabo listen to speakers talk about their right to firearms.

By a show of hands, King George County residents show their approval of a resolution to make the county a 2nd Amendment sanctuary locale on Tuesday, Dec. 3, 2019. Members of the Board of Supervisors heard public comments regarding the issue at this week's board meeting.

Several hundred people stood outside the King George meeting room, in the cold, for 2.5 hours until the supervisors passed the resolution making the county a Second Amendment sanctuary on Tuesday, Dec. 3, 2019.

From left, supervisors Cathy Binder, Chairman Jeff Bueche and Ruby Brabo listen to speakers talk about their right to firearms.

After the King George boardroom reached capacity at 160 people, hundreds of others waited outside Tuesday night to express their support for the rural county becoming a Second Amendment sanctuary.

Most of those in the audience—and the parking lot—wore bright orange stickers proclaiming that “Guns SAVE Lives.” Some also sported camouflage hats and coats, accessories definitely needed outside as temperatures dipped into the 30s. Residents lingered in the cold for 2 1/2 hours until the Board of Supervisors unanimously passed the resolution, which stated that officials would refuse to enforce any unconstitutional gun laws.

Twenty-three speakers—21 of them in favor of the resolution—commented during the one-hour period that Board of Supervisors Chairman Jeff Bueche allotted for input. Residents quoted from the constitutions of the United States and Virginia and invoked the names of patriots George Mason and James Madison. Born in King George, Madison authored amendments that protected individual liberties which later became the Bill of Rights.

“If Mr. Madison were here tonight, he would cringe that we even had to discuss this,” said Chuck Rowan, a King George resident who declared himself “American by birth, Virginian by the grace of God.”

Rowan said the issue wasn’t about types of firearms or the equipment that goes with them, “it’s about our rights.”

Across Virginia, residents—particularly in rural localities—have been fired up since the Nov. 5 election in which Democrats took control of both houses of the General Assembly. The state legislature doesn’t convene until next month, but politicians already have proposed bills that could impact the transportation of assault rifles, how many rounds they carry and the availability of firearm accessories.

The Rev. James Shaw, who described himself as “a good guy with a gun,” asked the supervisors to help residents defend freedom and liberty and “not become instant felons by the stroke of a pen.”

He was later followed by his three grandchildren, Lydia, Nathan and Joel Hansen, who had prepared written remarks because they said the topic was important to them, not because it was a home-school assignment.

While teenagers Lydia and Nathan cited news reports and carefully listed their reasons for making the county a Second Amendment sanctuary, Joel, 12, put things his way.

“The bills are stupid and only help criminals,” he said, adding the “proposed bills ... mess with peoples’ rights to protect themselves.”

Supervisors Bueche and Richard Granger praised the Hansens for their courage.

“At your age, I would never have been able to stand up here. I’m still nervous,” Granger said. “I was very impressed. Thank you for coming and speaking.”

Most of the comments focused on the Second Amendment language’s concerning the “well-regulated militia” and that the rights of people to bear arms shall not be infringed.

Anthony Martinelli offered the most impassioned speech of the evening, as he described violent takeovers in other countries.

“Brutal raw power cannot be appealed to with a smile and kind word, it can only be turned away with the same kind of raw power,” he said. “Please, for God’s sake, pass the Second Amendment resolution.”

Chairman Bueche, an avid hunter and shooter, proposed the resolution. Halfway through the hour he had allocated for public comment, he asked if anyone in the crowd opposed it. Barbara Jane Gaborow and Susan Park stepped to the podium and said the resolutions aren’t necessary because Second Amendment rights already are guaranteed by the Constitution.

Also, Gaborow said no one gathered was a “legal scholar or clairvoyant” who could predict what might happen in the General Assembly. She asked forgiveness for using the pun, but said, “I believe passing this resolution is jumping the gun.”

Supervisor Ruby Brabo said later that although only two people spoke against the resolution, many others had voiced opposition. All the supervisors said they’d gotten so many emails about the matter, they couldn’t respond to them all.

Park said she would be disappointed if board members passed the resolution because it would suggest that King George “doesn’t need to follow the laws of our commonwealth.” She also said the resolution takes away from real issues the county faces, such as infrastructure needs, and isn’t “worth the paper it’s written on.”

Bueche and Brabo explained the county was not passing an ordinance that could be enforceable, but a resolution of support, just as it would for National Farmers’ Market Day or Black History Month. Virginia counties can’t exercise any powers not given to them by the state.

But even though the measure is considered largely symbolic, Bueche said its passage went beyond symbolism to him. The resolution’s wording is similar to measures passed in dozens of other localities across the state, including Culpeper and Orange counties on Tuesday. Bueche particularly favored the paragraph that states “public funds, resources, employees, lands, buildings or offices” of King George shall not be used to restrict the Second Amendment rights of citizens or “to aid federal and state agencies in the restriction of said rights.”

As they did repeatedly during the evening, the crowd—inside and outside—cheered.

Well done King George, protect the Constitution and all of it's Amendments. Now move on without Ruby.

Congratulations to King George, as a county, standing up for the rights of the citizens and sending a message that inalienable rights will not be infringed. Those rights belong to us all for they belong to WE THE PEOPLE.

"Bueche particularly favored the paragraph that states “public funds, resources, employees, lands, buildings or offices” of King George shall not be used to restrict the Second Amendment rights of citizens or “to aid federal and state agencies in the restriction of said rights.” That ain't gonna fly

It flies and waves in the winds of freedom!

We'll see.........depends on how local jurisdictions respond to laws passed in Richmond. I think some are going to step over the line

john only thing not going to fly is YOU COMRADE the train is rolling and gathering speed. down with the democrat CRIMINAL party, physic evaluation for all democrats.

Lockup democrat who run sanctuary illegal cities/ states, who refuse to work with federal agencys THESE politicians are real criminals

Nothing illegal about being a sanctuary city. Quite the contrary. When cooperation with ICE results in people being held longer than the law allows, a crime is committed. Cities and counties have been successfully sued

There is no requirement to enter into agreements with ICE

It works when liberals want to have sanctuary cities and they don't have the force of the Constitution to back them up.