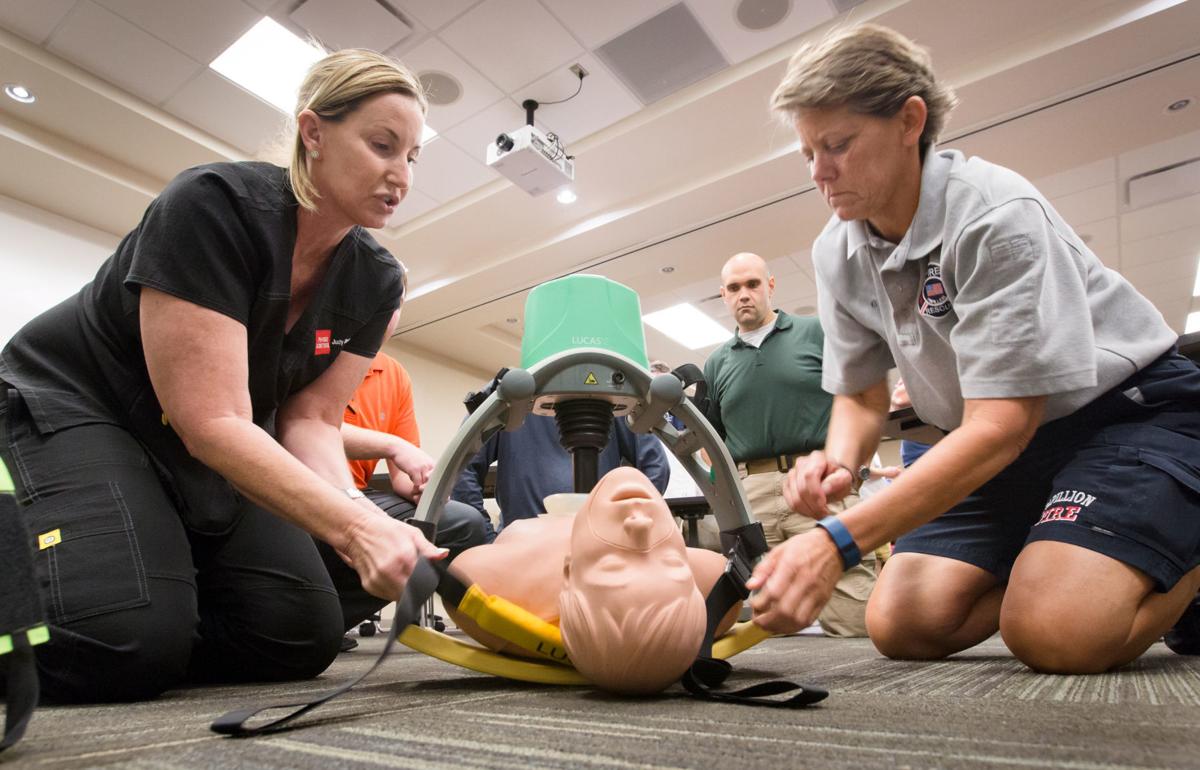 Emergency responders in Papillion, Neb., demonstrate how to use a LUCAS device—a unit that standardizes CPR chest compressions. A local couple has donated the latest version of the lifesaving device to the Fredericksburg Rescue Squad. 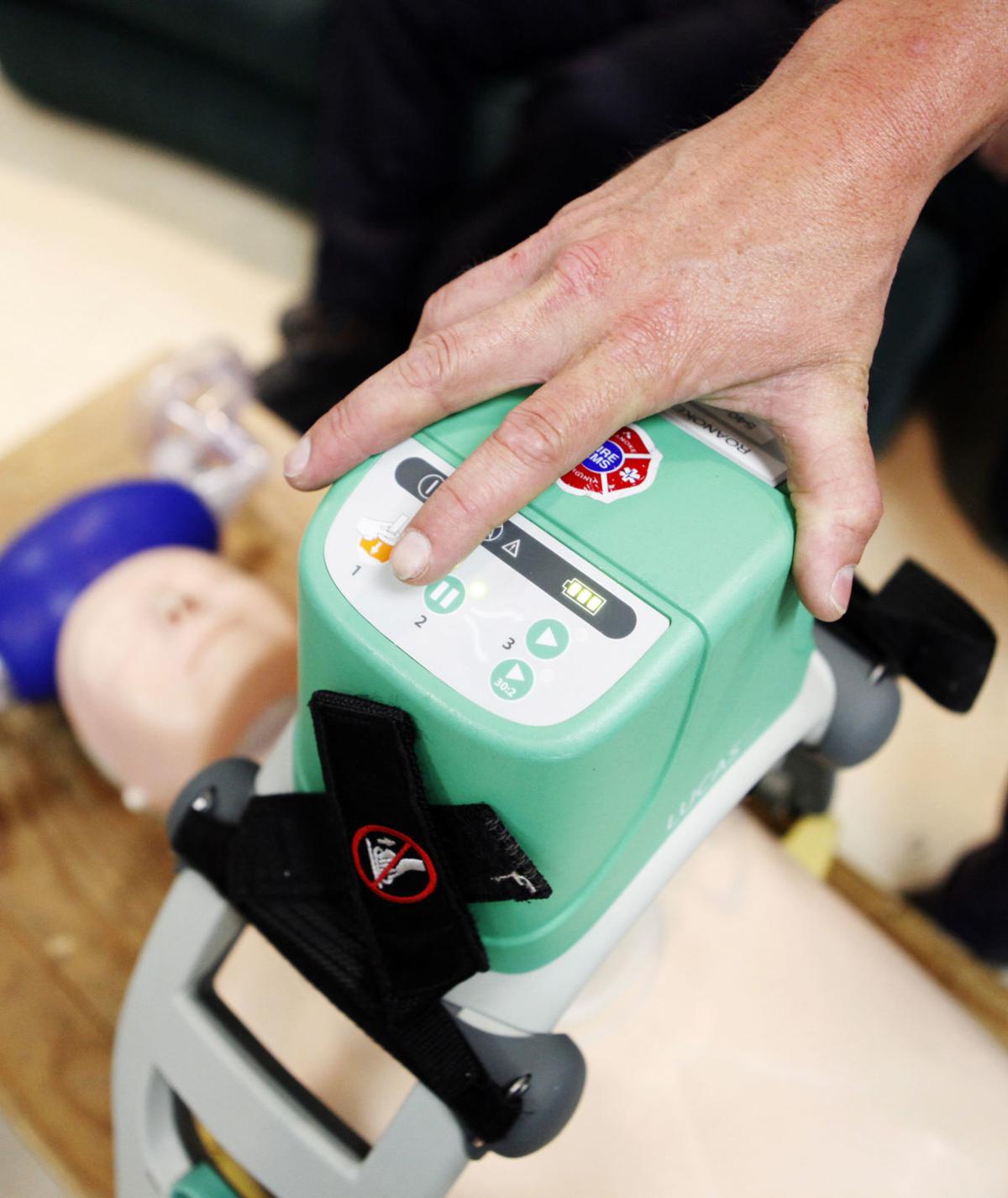 The LUCAS device frees emergency responders to do other lifesaving tasks. 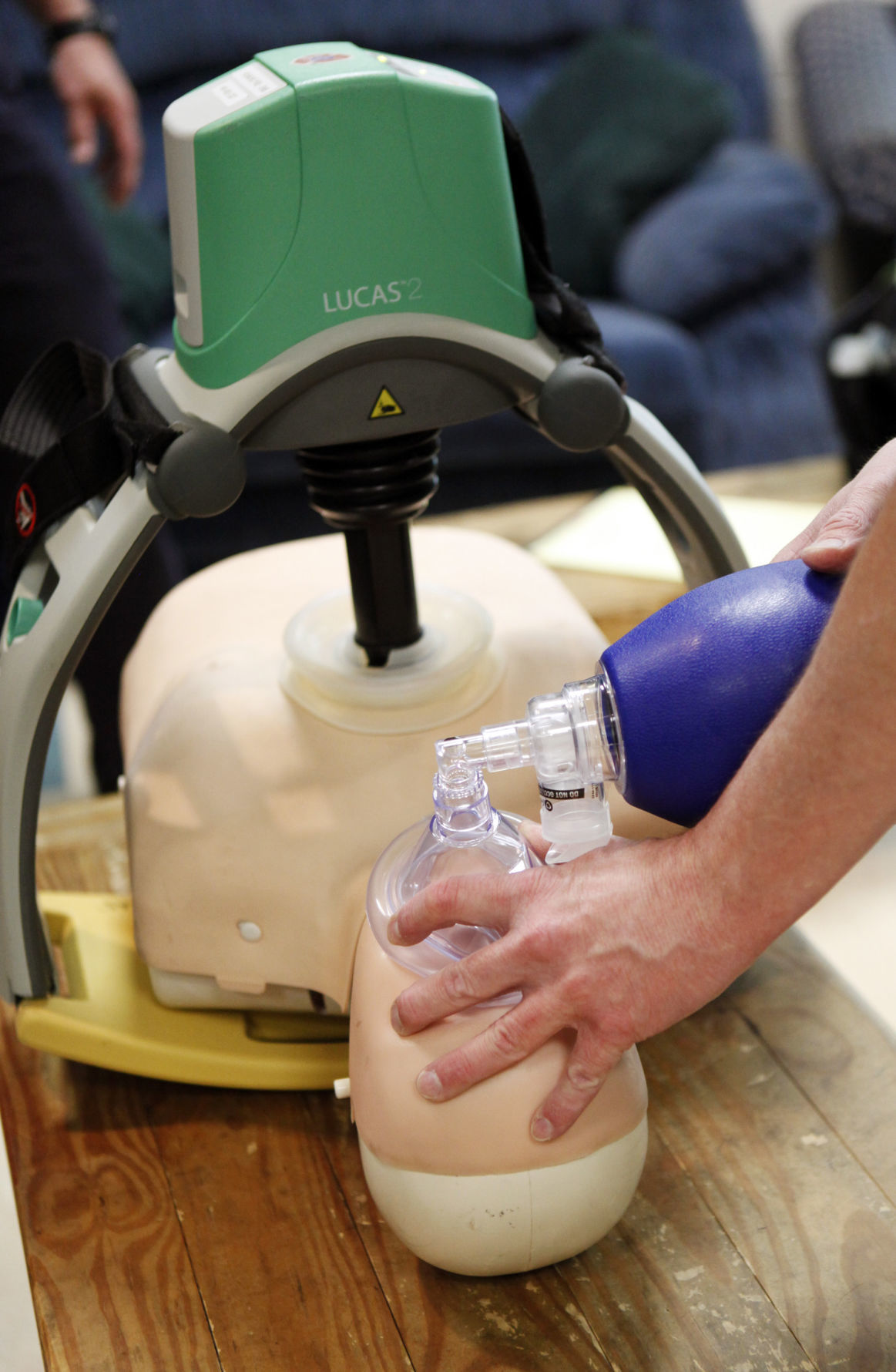 The LUCAS device is a machine that performs the chest compression part of CPR on patients. The machine performs 100, two-inch deep chest compressions per minute, and allows medics to concentrate on other duties such as giving oxygen.

Emergency responders in Papillion, Neb., demonstrate how to use a LUCAS device—a unit that standardizes CPR chest compressions. A local couple has donated the latest version of the lifesaving device to the Fredericksburg Rescue Squad.

The LUCAS device frees emergency responders to do other lifesaving tasks.

The LUCAS device is a machine that performs the chest compression part of CPR on patients. The machine performs 100, two-inch deep chest compressions per minute, and allows medics to concentrate on other duties such as giving oxygen.

One couple’s brush with death may help save other lives.

A Stafford County husband and wife, who wish to remain anonymous, were out to dinner a few months ago when he suffered a cardiac arrest. That’s when the heart suddenly stops beating, usually as a result of an “electrical” issue such as an irregular heart beat. It’s different from a heart attack, a “plumbing” problem caused when blood flow to the heart is blocked.

More than 356,000 people suffer from sudden cardiac arrests, outside hospital settings, each year in the United States. Typically, only 1 of 10 will survive, according to the Sudden Cardiac Arrest Foundation.

The husband was one of the lucky ones. He was resuscitated by members of the Fredericksburg Fire Department. As he recovered, he and his wife, who had been saving for a tractor, decided to switch gears and assist those who had helped them.

The couple worked with Mike Jones, deputy fire chief, who purchased a LUCAS device for the Fredericksburg Rescue Squad on their behalf. It had been used during the husband’s rescue to perform automatic chest compressions, the vital action that keeps blood flowing to the brain and organs when the heart stops working.

The device provides a consistent and steady beat of compressions during cardiopulmonary resuscitation and frees rescuers to do other life-saving tasks, such as gaining access to the veins and starting drugs to stabilize the heart, Jones said. LUCAS keeps the compressions going as the patient is lifted onto a stretcher and placed into an ambulance.

Each LUCAS unit costs $15,000, so when Jones recently surprised the rescue squad with the equipment, members were floored.

“It was absolutely phenomenal to have a donation like that, for them to go out and purchase something this expensive and meaningful,” said Trey Lewis, the squad’s public information officer. “It blew everyone’s mind. I can imagine several jaws dropped.”

Jones called it a win–win situation for the couple, because the husband not only survived the cardiac arrest, but he and his wife were still able to get the tractor they wanted, as well.

“To be able to donate a piece of equipment that might save the life of someone else, I think that’s a very noble thing to do,” Jones said.

The Fredericksburg squad already had two LUCAS devices, and the donation ensures that all three ambulances have the equipment, Lewis said. The donated LUCAS is version 3.1, the “latest and greatest” model from the manufacturer, Physio–Control/Stryker, Jones said.

LUCAS has been used by rescuers throughout the region for several years. An in-service video shows rescuers arriving on the scene, where a man has passed out. One rescuer starts compressions immediately as another unpacks the LUCAS equipment. The two lift the victim to put a back plate under him, then hitch the upper part of the device to the plate.

The equipment forms an arch over the victim, and within seconds, the suction cup goes over the chest and starts pumping, up and down.

CPR protocol calls for rescuers to keep compressions going for as long as 30 minutes, and studies have shown that can be impossible for a person to maintain, no matter how strong he or she is.

While more rescue companies opt for the equipment that provides them another set of hands, another aspect of CPR regarding hands has changed. The American Heart Association suggests that lay people do not perform mouth-to-mouth resuscitation but stick to a hands-only technique.

When bystanders come across someone who has suffered a cardiac arrest, one person should first call 911 and give a specific address since a mobile phone is not associated with one.

At the same time, another should put one hand over the other and push hard and fast in the center of the chest to the beat of any tune that is 100 to 120 beats per minute. The classic Bee Gees tune, “Stayin’ Alive,” works well.