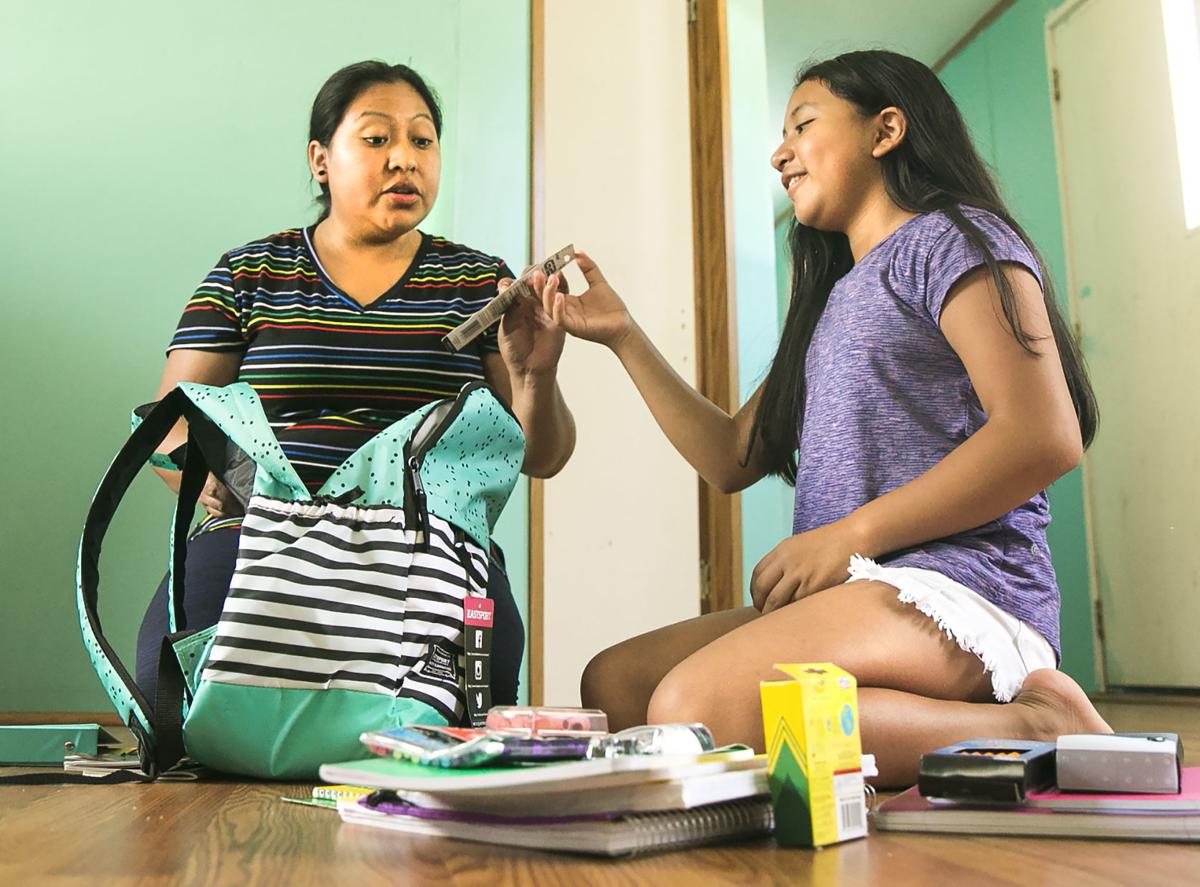 Claudia and her nine-year-old daughter Griselda go through school supplies that were brought to their Spotsylvania County home by Sue Smith, co-founder of LUCHA Ministries, on Thursday, Aug. 1, 2019. Claudia migrated to the United States from Guatemala and is seeking asylum. 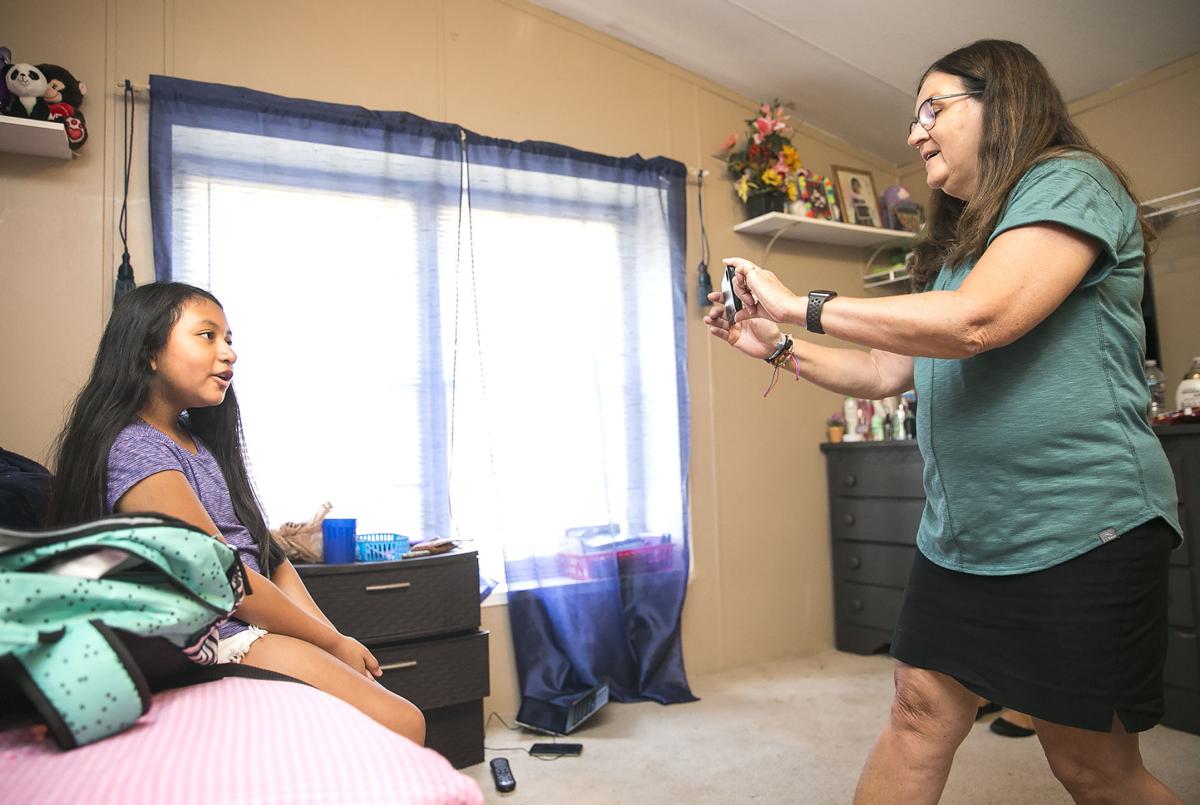 Sue Smith, co-founder of LUCHA Ministries, makes a video of Griselda thanking a church that donated supplies and prayed for she and her mother in the girl's Spotsylvania County home on Thursday, Aug. 1, 2019. Griselda and her mother Claudia migrated to the United States from Guatemala and are seeking asylum. 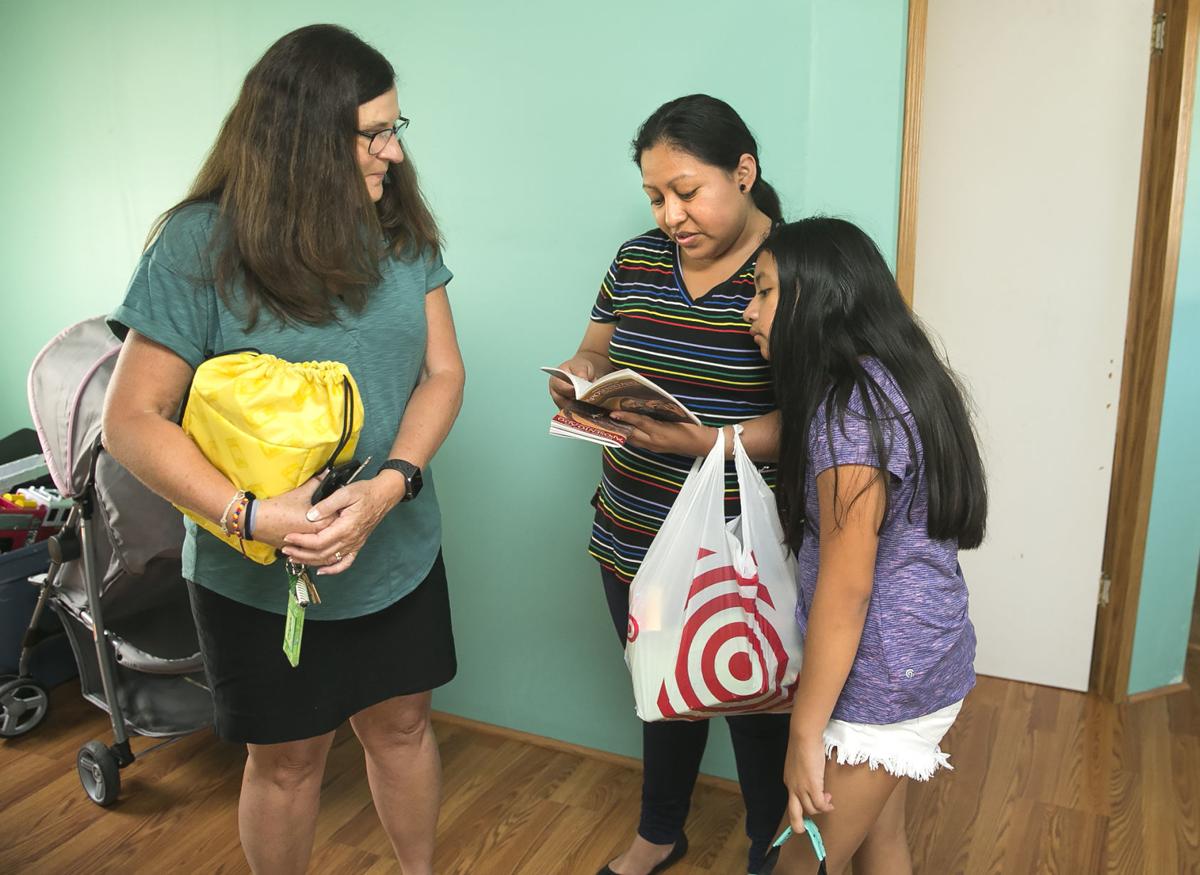 Claudia (center) and her nine-year-old daughter Griselda look over books given to them by Sue Smith, co-founder of LUCHA Ministries, on Thursday, Aug. 1, 2019. Claudia and Griselda migrated to the United States from Guatemala and are seeking asylum.

Claudia and her nine-year-old daughter Griselda go through school supplies that were brought to their Spotsylvania County home by Sue Smith, co-founder of LUCHA Ministries, on Thursday, Aug. 1, 2019. Claudia migrated to the United States from Guatemala and is seeking asylum.

Sue Smith, co-founder of LUCHA Ministries, makes a video of Griselda thanking a church that donated supplies and prayed for she and her mother in the girl's Spotsylvania County home on Thursday, Aug. 1, 2019. Griselda and her mother Claudia migrated to the United States from Guatemala and are seeking asylum.

Claudia (center) and her nine-year-old daughter Griselda look over books given to them by Sue Smith, co-founder of LUCHA Ministries, on Thursday, Aug. 1, 2019. Claudia and Griselda migrated to the United States from Guatemala and are seeking asylum.

Migrants from the Central American countries of Guatemala, Honduras and El Salvador have been claiming asylum in the U.S. in increasing numbers since 2011 and the Washington, D.C. metropolitan area is home to the third largest number of these migrants, after Los Angeles and New York City.

Data from the 2013-2017 American Community Survey found that there were 3,400 immigrants from Central America living in Stafford County and 3,700 living in Spotsylvania County.

The Free Lance-Star is profiling three local families that are representative of those now requesting asylum in the U.S. Today, a newly arrived indigenous woman and her daughter who are fleeing food insecurity in Guatemala navigate try to settle in to the community.

On Monday, a single mother from Guatemala talks about escaping interpersonal violence with her young daughter and on Tuesday, a single father of two young boys recalls fleeing gang violence in Honduras.

Everywhere Claudia went, the man was there.

At first, he started hanging around her house.

“My family sort of knew him, but we didn’t know what he did,” she said.

“He’d stalk me or send someone else to stalk me,” Claudia said, speaking through a translator—Sue Smith with Lucha Ministries—in the Spotsylvania County trailer she and her 9-year-old daughter, Griselda, share with another family.

The man told her that he wanted to have a relationship with her, but she’d learned from a cousin that he was already married. Someone else told her he was dealing drugs.

Claudia told the man that she didn’t want any trouble. She told her father that the man was pressuring her, but her father said if he wasn’t physically hurting her, nothing was really wrong.

Then the man showed up at her house at 1 a.m.

“He’d been drinking and he had a gun,” she said. “He hit me with a stick and told me I would do as he said.”

He wanted her to go with him and leave behind Griselda, then 5 years old.

Rather than be separated from her daughter, Claudia decided to flee her village home in Huehuetenango, a province in the western highlands of Guatemala, and travel to Mexico, where she knew she could get work without a visa.

But Mexico was dangerous for a single mother, and an acquaintance told her she’d be safer in the U.S.

Claudia said her family back home arranged for transportation to the U.S. border. She was to go to a convenience store in a Mexican town and wait there for someone in a car to pick her up.

While she was waiting at the convenience store, the woman she was traveling with went to the bathroom—and never came back. Claudia said she never found out what happened to her.

A car eventually came to pick up Claudia and Griselda and drove them to an area outside Juarez.

“They dropped us off under a bridge,” Claudia remembered. “They told us, ‘Just keep walking and someone will pick you up.’

“We were scared. We saw water bottles and clothes by the side of the road. Griselda was crying, so I carried her.”

They got to the top of a hill and looked over. All they saw was desert.

“I thought we would die there,” Claudia said. “So I told Griselda we would go home.”

She turned around and started walking along some train tracks. A short time later, an Immigration and Customs Enforcement officer picked them up.

“She gave us water and called for a car seat for Griselda,” Claudia said.

The officer took them to the Santa Theresa Port of Entry in New Mexico, about 20 minutes from El Paso, Texas. There, Claudia applied for asylum and was fitted with an ankle monitor so ICE could keep track of her. She and Griselda spent three days in a detention center near the border and then they were released.

In November 2015, they arrived in Fredericksburg, where a friend of Claudia’s family lived and was ready to receive them.

They’ve been waiting here since.

WOMEN ON THE RUN

Though the majority of migrants from Guatemala are seeking relief from poverty and food insecurity, the Department of Homeland Security says, the country does have crime rates that are among the world’s highest.

Gangs such as MS-13 have a presence in the country that is growing stronger as other countries in the region crack down on gang activity, Claudia said.

Much of the country’s violence is an after-effect of the Guatemalan civil war, which lasted for 36 years and killed more than 200,000 people—most of them indigenous, like Claudia. She and her family are Awakatek, a Maya people.

The overall crime rate in Guatemala has been falling since 2009, statistics show, but the rate of gender-based violence is still high. According to the United Nations, the country is among those with the highest rates of violent death among women.

“Women on the Run,” a 2015 study of female refugees from Guatemala, Honduras and El Salvador conducted by the United Nations high commissioner for refugees, placed Guatemala third in the world for its rates of female homicides.

For the study, 160 female asylum-seekers like Claudia were interviewed. Eighty-five percent said they lived in neighborhoods controlled by transnational or local criminal groups and 65 percent said they, like Claudia, were the the target of direct threats or attacks by members of these groups.

Of the indigenous women interviewed for the study, 80 percent reported physical or sexual abuse.

Claudia’s asylum case is in limbo. She said her last court date was canceled. She doesn’t know why.

“My lawyer says that could be good or bad,” she said.

Her next court date is not until June 2021. Until then, she and Griselda are trying to live normal lives. She asked that their last names be withheld out of fear of influencing their case.

“I like Virginia—it’s safe here,” Claudia said. “Griselda is doing well in school. Where she is good, I am good.”

Claudia has a work permit and has held the same job at a local restaurant since she first arrived in Fredericksburg. She started there doing kitchen prep work and now she cooks and occasionally waits tables, which allows her to learn some English.

“I will do anything, as long as I can work,” she said.

Her dream job would be to work as a translator, but right now she can’t see how she would balance studying with her job.

Mostly, Claudia is focused on giving her daughter, who attends Spotsylvania County schools, as many opportunities as she can.

“I want her to have something better than me,” she said, looking over at her daughter reading from her favorite book, a Bible reader with stories of Adam and Eve and David and Goliath.

Griselda wants to be a teacher.

“When I ask her what she wants to do, that’s always what she says,” Claudia said.

Claudia worries about her family back in Guatemala. Because of the climate, they are no longer able to grow enough food to sell—only enough to feed themselves, and often not even enough for that.

“Last year, it didn’t rain,” Claudia said. “It was too dry and there was no harvest of rice or beans. I had to send money to my family.”

Her mother called her in tears. She told Claudia, “We are alive only because you are there.”

Claudia said her brother wants to come to the United States as well, but he’s afraid of being sent back to Guatemala at the border.

“The fear is that he borrows money to come here and then gets sent home, and there is no way to pay the money back,” she said. “That is very dangerous.”

Claudia said she wants people to know that immigrants come to the United States out of need.

“We all come for a reason,” she said. “Our countries don’t have work, they don’t have security and safety. We are safe in this country.”

Sue Smith, executive director of Lucha Ministries, a nonprofit that serves the local Latino population, sat at the Community Health Center of …

These are exactly the kind of people we should welcome here. They are hardworking, honest and adaptable. For parallels within American history watch the movie The Grapes of Wrath about the migration of dust bowl farmers to California in the 1930s, where they were hardly welcomed, but now are one of the largest groups in a very successful state. Christians especially should be out in front of this . Jesus was very clear on these issues.

as clear as can be, yep