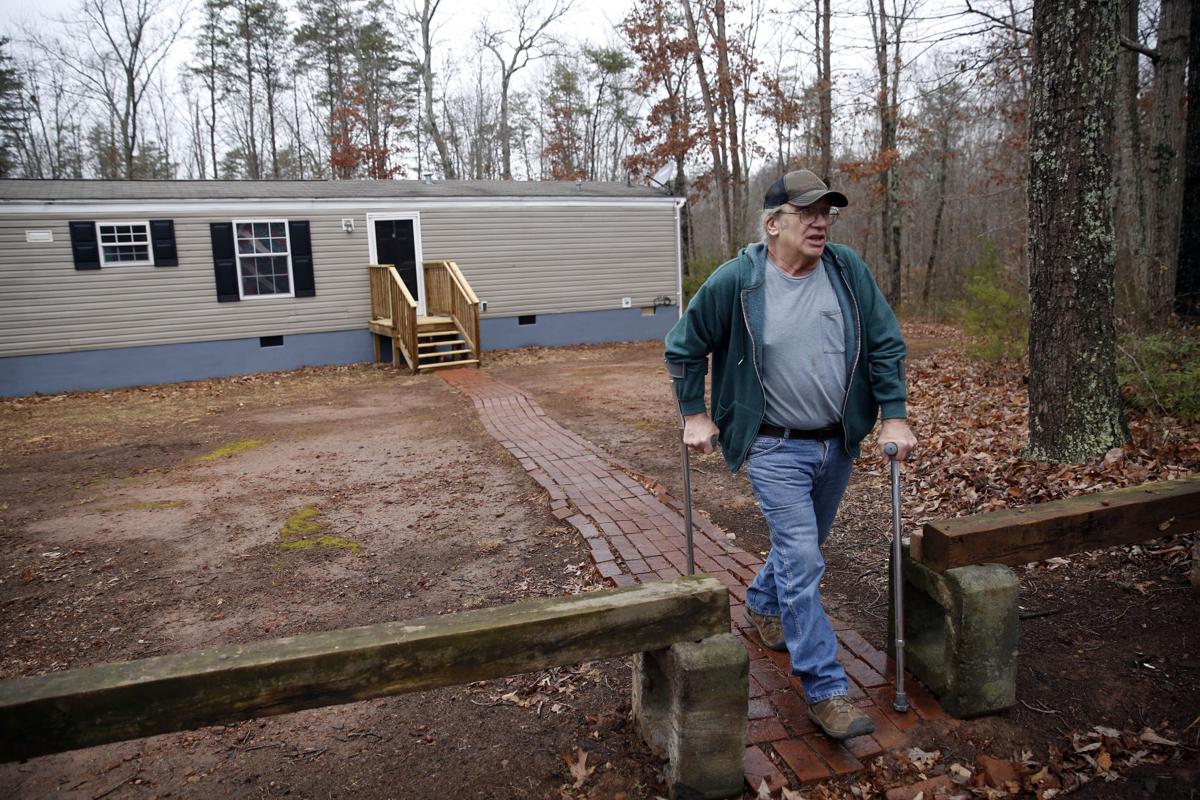 Gary Goodrich, 65, a Navy veteran left disabled by a stroke, closed last week on the first house he has ever owned. 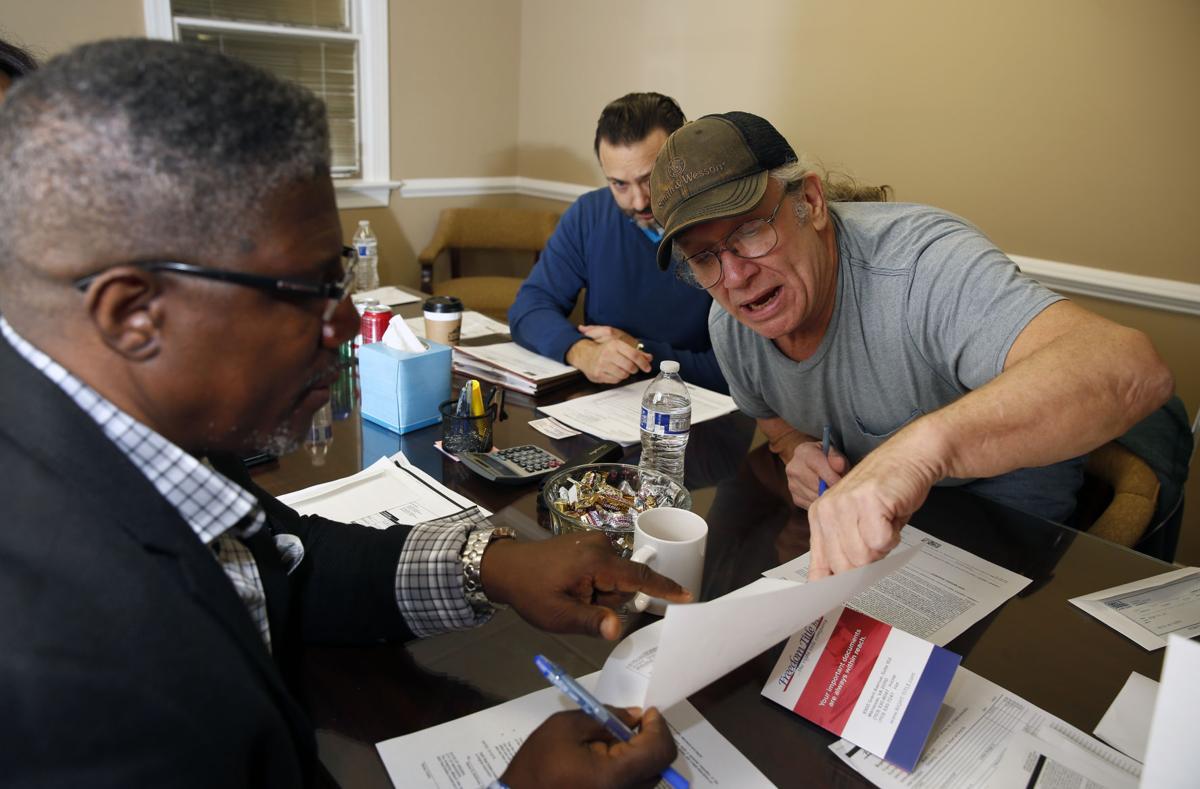 Barzel McKinney (left) and Edwin Wyant (center) look on as Goodrich (right) looks over the plat to his new home. 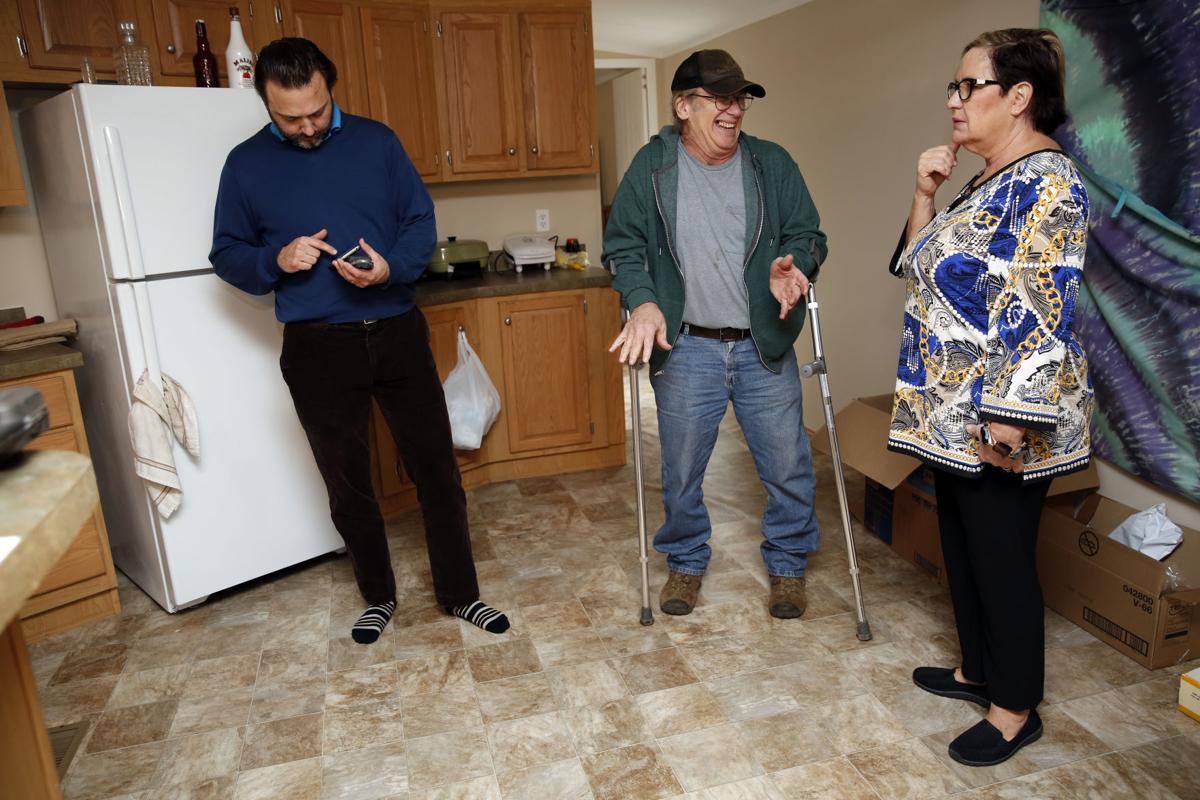 Edwin Wyant (left) and Deneen Bernard (right) visit Gary Goodrich in his new home. Goodrich was able to buy his house, which sits on almost 14 acres in Orange, for $110,000. 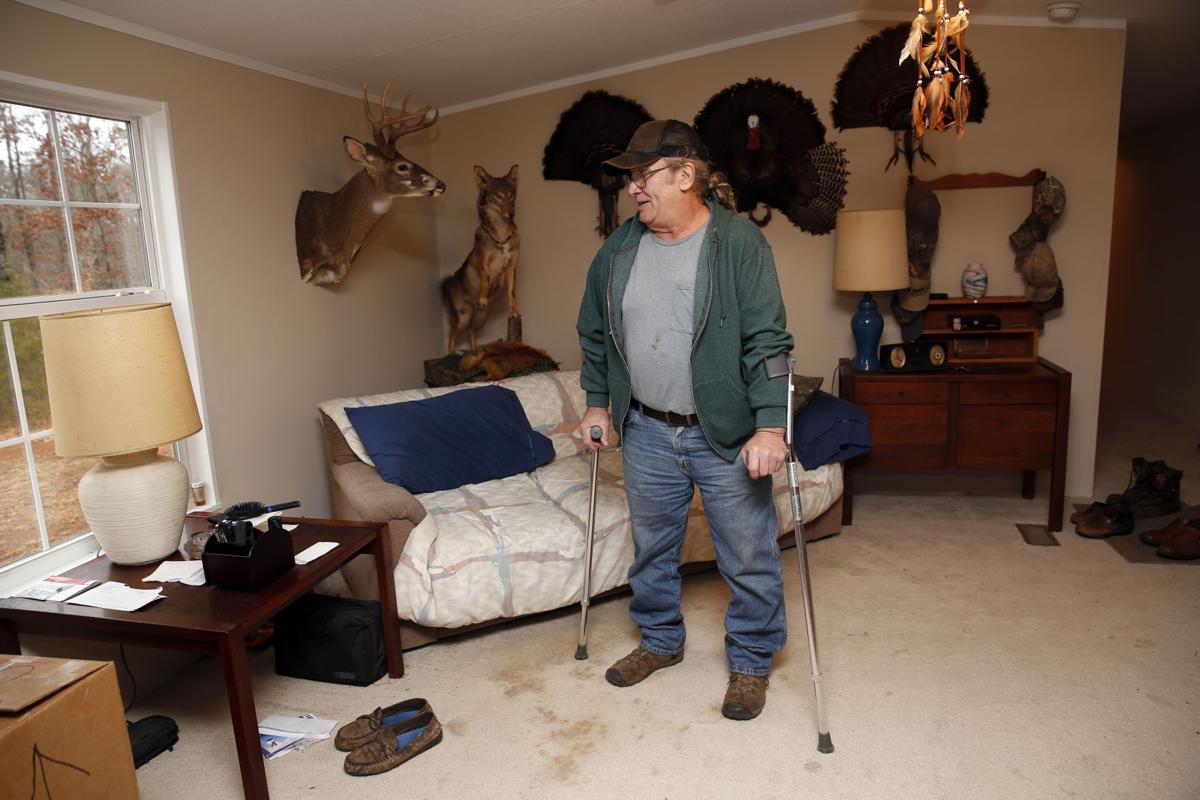 Goodrich was disabled by a stroke, but got some help from local real estate professionals to close on his very first house.

Gary Goodrich, 65, a Navy veteran left disabled by a stroke, closed last week on the first house he has ever owned.

Barzel McKinney (left) and Edwin Wyant (center) look on as Goodrich (right) looks over the plat to his new home.

Edwin Wyant (left) and Deneen Bernard (right) visit Gary Goodrich in his new home. Goodrich was able to buy his house, which sits on almost 14 acres in Orange, for $110,000.

Goodrich was disabled by a stroke, but got some help from local real estate professionals to close on his very first house.

He arrived right on time, just as he always did, carrying the worn camouflage briefcase he brought with him everywhere.

Inside, he said, was his life. His Navy discharge papers and his complete medical history detailing the stroke that left him disabled, his checkbooks and the notepads he used for jotting down things he wouldn’t remember.

There was a cashier’s check, withdrawn from a bank that morning. It was nearly the sum of his savings, pieced together from disability payments and Social Security, but it was enough.

At 65, Gary Goodrich was buying his first house.

He put the briefcase on the floor next to him and the check on a table, where his lender and the agents and title company owner all gathered around a mountain of paperwork Friday morning.

“If you hadn’t pulled off this miracle,” Edwin Wyant, his agent, told Goodrich, “we all wouldn’t be here.”

“Oh, no, I didn’t pull all this off. It was all of you guys,” he said, and really, they were both right.

It started with an eviction.

After 25 years in a rented stone house in the woods in Haymarket, Goodrich’s landlord called.

The property was going to be developed. The stone house had to go. So did he.

Goodrich knew the day was coming, but still, he wasn’t prepared for it. And while there is never a good time to get kicked out of your house, this was a particularly bad time.

A stroke had left him unable to work. His only income was Social Security and disability pay.

Because he’d served three years in the Navy, the Department of Veterans Affairs provided his medical care. He was also a candidate for a VA home loan. Until his health crisis, he’d never imagined either scenario.

Goodrich can’t remember how he came across Edwin Wyant, a real estate agent with Long and Foster, but figures he must have stumbled across something online while looking for another rental.

When they spoke by phone for the first time in October, Wyant floated the idea of home ownership. The first thing they’d have to do was figure out how much Goodrich could borrow.

That was where Deneen Bernard, certified mortgage planning specialist with Affordable Home Loans in Stafford County, came in.

Goodrich had worked for years to get his credit score up, and he’d been successful. Still, he only qualified for a $110,000 home loan. Finding property in this region for that price is a tall order. Only a handful were even listed in that price range, Wyant said.

But there were some—Wyant says they visited four or five in all. Among them: A three-bedroom, two-bath modular home on nearly 14 acres in Orange County.

It was a foreclosure, and it needed some work. Goodrich didn’t qualify for a home improvement loan, and without the improvements, the VA wouldn’t guarantee the loan for the property. It was also listed at $15,000 more than what he was approved for.

That was where the listing agents came in. Brenda and Barzel McKinney of Touch of Sold Realty are veterans who once had a dream themselves. They wanted to build their own business, and now that they had, they took pride in helping others.

Barzel McKinney sent a team into the house to replace floors, lay down carpet, put fresh paint on the walls and install missing appliances.

Everyone involved was gathered around a conference table at Freedom Title in Fredericksburg on drizzly, humid Friday. Jim Croson, the owner, had reduced his fees for the final transaction.

Maybe these circumstances seemed unusual, said Croson, who sat at the head of the table, with Goodrich to his right and the McKinneys across from him. “Over the last few years, there are more and more situations where real estate professionals come together for special situations and help out.”

A day before, on the eve of his closing, Goodrich offered his own explanation as to how it was happening.

“I just got lucky. I happened to step off in the right direction. They busted their butts,” he said of the crew who’d helped make it possible. “They talked me through every step. Now I’m going to sign papers on the very first home I’ve ever owned in my life.”

He was signing them, one after the other, as Croson explained what each one was for. Every once in awhile, Goodrich stopped to shake out his hand from the strain of so much writing.

Goodrich, who had spent the last month renting the house he was now buying, talked about meeting the neighbors, and a neighbor’s dog, and walking to a creek near his wooded property that was the perfect fit for him.

“It’s just so weird it happened so late in my life,” Goodrich said.

“But it happened,” Barzel McKinney told him.

“The good thing is nobody is going to knock on my door and say you have to leave because we’re developing your land,” Goodrich mused.

Croson slid another paper in front of him. “This one says that you will live in the house,” he said, explaining that some people will actually rent out a property they say they plan to live in, in order to qualify for a low-interest loan.

“Don’t worry,” Goodrich said. “I’m gonna be there. They’re going to have to pry me out of that place.”