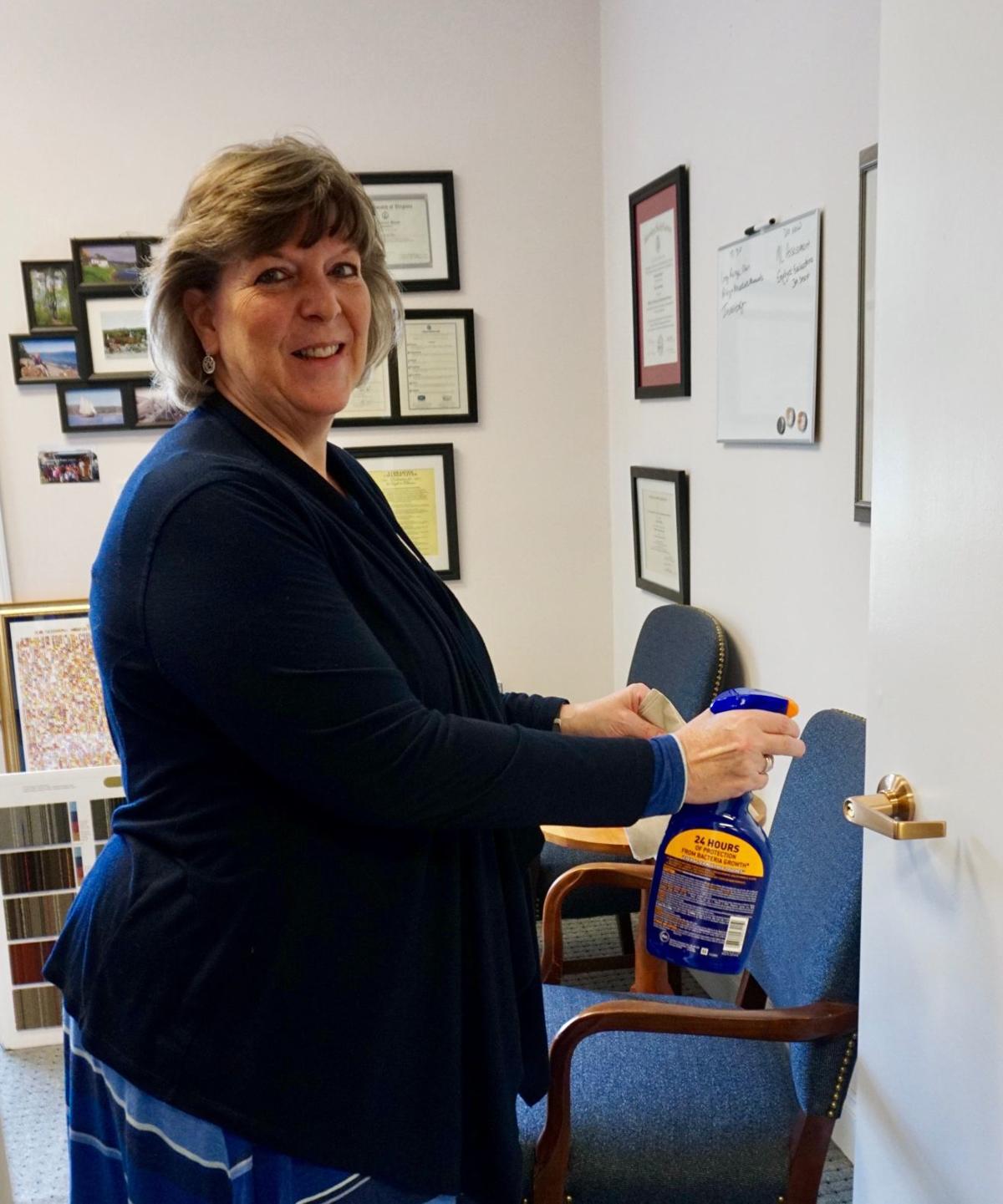 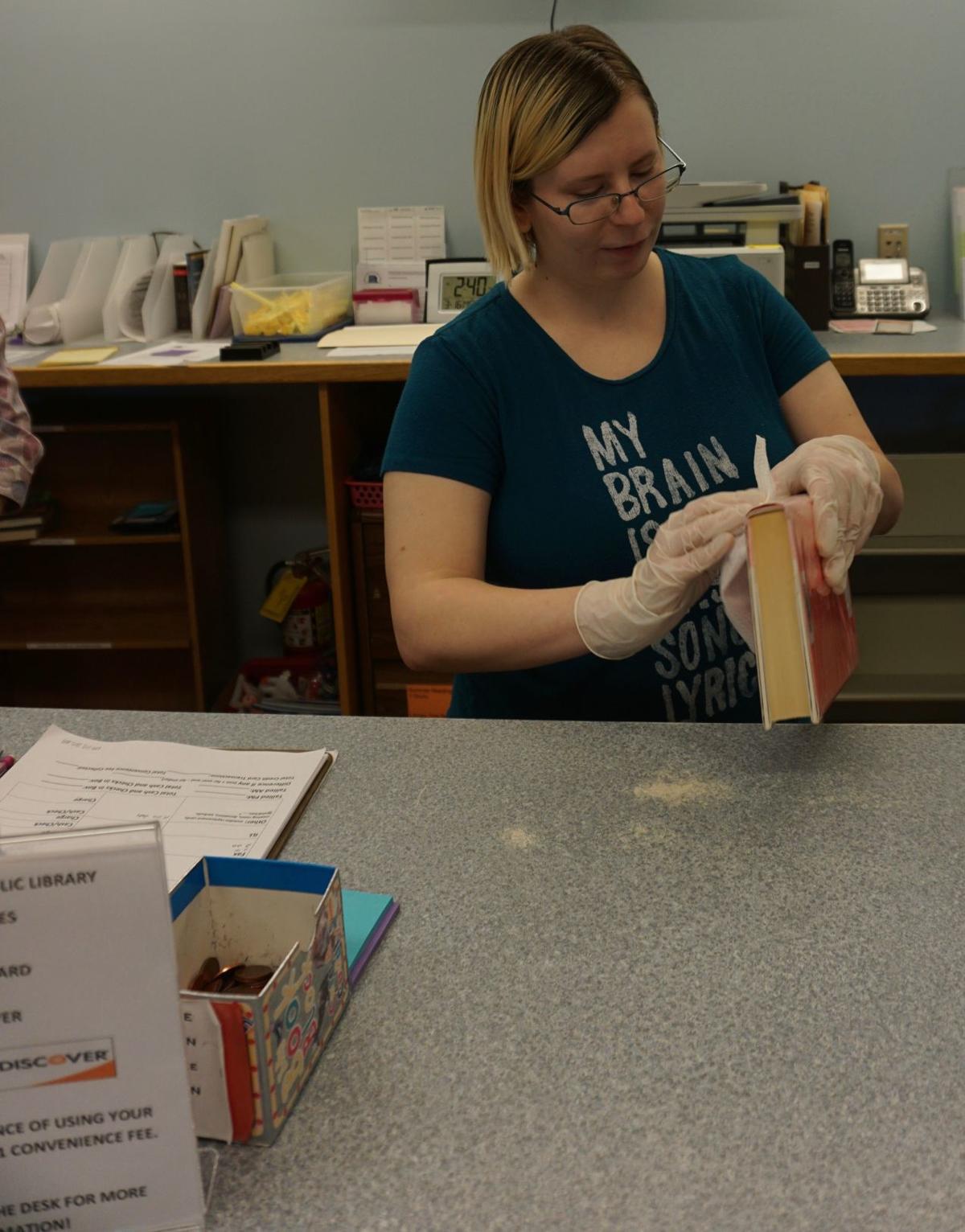 HEATHSVILLE—Public libraries are at the heart of rural communities. They are a gathering spot for meetings, catching up on a host of regional and national newspaper reading and a safe place for friends and neighbors to meet up.

But the coronavirus has changed all that.

On Monday, the tiny staff of the Northumberland County Public Library was busy taking phone calls about whether the library was open. Staff donned protective gloves to disinfect returned books and door handles.

Patrons checked out stacks of books as word came from the governor and the federal government to stay home and not gather in large groups. The few who were working here spaced themselves around the library working on a computer far from another patron or at a table alone.

“I’m just amazed at the number of books people are taking out,” said librarian Alison Towles. “I sold this [library] tote because this lady checked out so many books I wasn’t sure how she could carry them.”

Towles said a lot of parents have come in with their children because there’s no school.

“I noticed a lot of nonfiction going out, so I think a lot of parents are working with their kids at home,” she said.

A group of high school girls came in to apply for summer jobs online, then lounged in the children’s section giggling and wondering what to do with so much time off.

“They gave out packets for two weeks. I don’t understand how that works for seniors who need to graduate,” she said. “We need seat hours, so I don’t know how we’re going to do that if we can’t go to school.”

Kelly said she wanted to volunteer at a local nursing home, but all have been quarantined. She and her friends said Monday that they planned to keep coming to the library as long as it remained opened.

The Library of Virginia canceled all its public programs until the end of April, including use of public space. It also postponed training sessions. Many of Virginia’s libraries also closed, including other libraries in the Northern Neck, Central Rappahannock Regional Library, and L.E. Smoot Memorial Library in King George.

By late Tuesday, Northumberland County announced it was closing its offices. Though the library is not operated by the county, the library board decided to close the doors, as well.

But not all the way.

Jane Blue is the library director and has been on the job all of five months. She has been in touch through the Library of Virginia list-serve with other Virginia libraries and had been making plans for when the library might be closed to the public.

She decided to adopt a curbside service being offered by some of the other libraries.

“I’m modeling after what I’ve seen my peers do,” Blue said.

Patrons can call or go online to put a book on hold then drive up and a staff member will hand it to them. And she added something else. Blue said patrons will be able to print remotely, pay with a credit card and pick up their documents outside the front door.

The library is a major provider of free broadband in the county 24/7 outside in its parking lot. Just about any time of day, someone is sitting in a car using a mobile phone or laptop. That will remain on. In addition, the mobile library, also called the Tech Mobile, will be parked at a nearby church, where it too will provide internet access through solar power.

“We cancelled all programs in our meeting rooms until the end of the month,” Blue said. “Any of my volunteers who are at risk, I called them all and told them not to come in.”

She also closed the book shop and stopped taking donations. Used books are hard to disinfect, unlike the plastic covered library books. The library’s books, along with its collection of DVDs and CDs, are wiped down with disinfecting wipes by staff who wear protective gloves.

The staff is also regularly spraying and wiping counters, tables, keyboards and doorknobs.

Now that the library is closed to patrons coming in, Blue will have her staff conduct an inventory of the library, something she’s been anxious to do since she came on board. They can do that and help patrons via phone and email while providing curbside lending services. And they will clean.

Blue laughed as she described the amount of disinfecting that went on while the library was open, and even now as it moves to curbside service.

“Everything. I wish we could wipe down patrons, but we can’t do that. So the next best thing is to wipe down everything that comes in,” she said.

“We’re trying to stay germ-free. Although a few germs never hurt anyone, it’s actually a good thing for your immune system, this is a germ we don’t want here.”