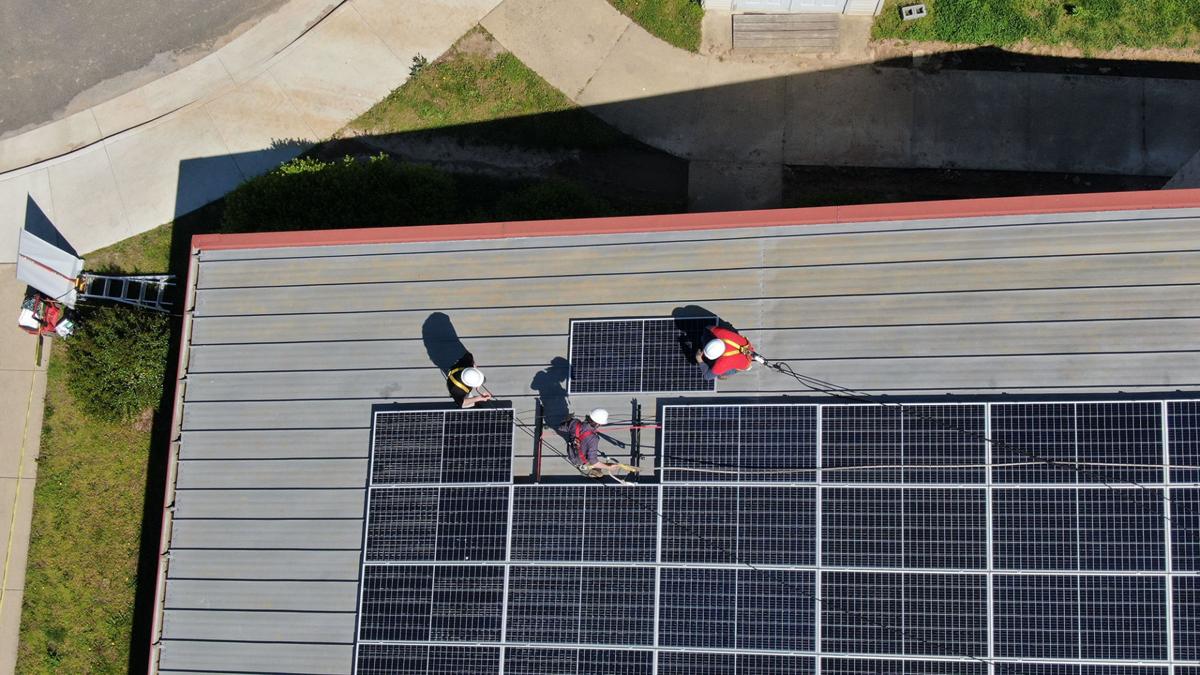 Workers install photovoltaic panels on the roof of the Brisben Center in Fredericksburg. Officials at the center hope energy produced by the solar panels, along with other efficency measures, will cut utility bills by 70 percent. 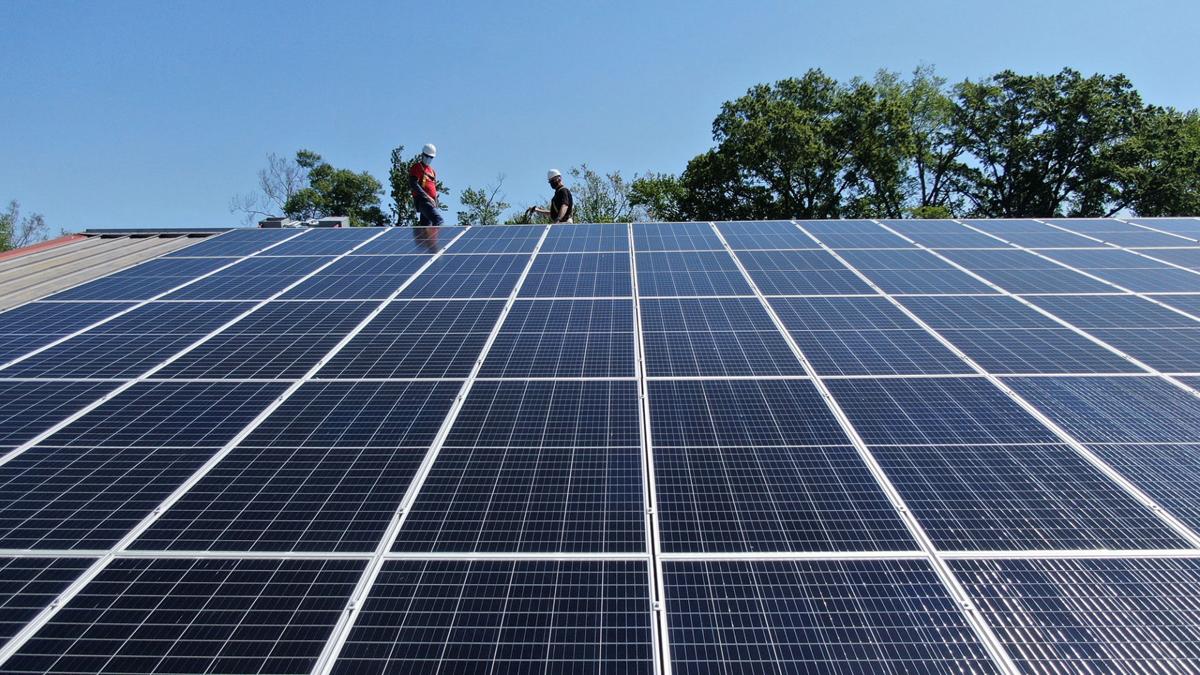 The Brisben Center in has the largest solar power array of any homeless shelter in the state.

Workers install photovoltaic panels on the roof of the Brisben Center in Fredericksburg. Officials at the center hope energy produced by the solar panels, along with other efficency measures, will cut utility bills by 70 percent.

The Brisben Center in has the largest solar power array of any homeless shelter in the state.

The sun shone in a nearly cloudless sky recently as three men installed the last solar panel on the Brisben Center’s roof, then lifted their arms up high in celebration.

The new 115.2 kilowatt photovoltaic solar panel system is the largest rooftop solar array on any homeless shelter in Virginia, and is one of the largest of any shelter in the country. Along with several energy-efficiency retrofits, it will slash the Fredericksburg center’s month utility bill by more than 70 percent, or around $1,400. That adds up to about a $500,000 over the 30-plus-year lifespan of the system.

“We see this as an investment in our future and doing our part to be environmentally sustainable,” said David Cooper, the Brisben Center’s CEO and one of the three in the rooftop celebration. “Providing for cost-savings on our energy bill means that we can repurpose those savings toward our mission of resolving poverty and helping end homeless.”

He credited the Sunshine Lady Foundation, an anonymous donor and other community partners such as sPower, which provided the solar panels, with making the project possible.

Cooper said he got the idea for using solar power soon after taking over as head of the facility two years ago and began seeking partners. Among them were the other two who helped put the finishing touches on the solar array: Robert Courtnage of Fredericksburg’s Clean and Green Commission and Bobby Kirby of GRID Alternatives Mid-Atlantic, a nonprofit that provides no-cost solar installations and solar job training for income-qualified residents and commercial properties.

GRID Alternatives helped the Brisben Center secure local and national grants, design the solar array and provide training for people with low incomes who’d help install it. The idea was not only to save money and help combat climate change, but to expose the trainees to careers in the growing solar energy field. According to the U.S. Bureau of Labor Statistics, the job outlook for solar photovoltaic installers is expected to grow 63 percent from 2018 to 2028, and the median salary is $21.58 per hour.

“In the past, we really focused on just being an emergency shelter for folks in the community,” Cooper said. “We’re more than heads in beds now. We’re truly focused on how we can help folks be more engaged with 21st century careers so they can earn a liveable wage so they don’t return to the center, so they do have affordable housing that’s available to them, and that they’re prepared to engage, to occupy that housing.”

The Brisben Center serves up to 600 men, women and children each year, making it the largest provider of shelter and services to people experiencing homelessness in the greater Fredericksburg region. Cooper said there’s a misconception that adults living at the facility temporarily don’t work. Most are underemployed.

Seven people were recruited from the Brisben Center, the Spotsylvania Department of Social Services, Micah Ecumenical Ministries, the Rappahannock Area Community Services Board and other human services organizations to receive classroom and hands-on training from GRID Alternative.

“This means a lot,” said Daniel Seliciano, whose previous jobs included washing dishes at a restaurant. “It gives me the opportunity to be independent, to get a job and get my own apartment and be happy. You know, this kind of job makes me happy. It’s interesting, this job, and helps stop pollution and save money.”

He and the other trainees were to have helped install the solar panels at the Brisben Center and the solar lighting and flagpole in the parking lot of the new Fredericksburg Nationals stadium in Celebrate Virginia South. Those plans were quashed due to COVID-19 restrictions. Instead, GRID Alternatives had its own crew do the work as they followed social distancing requirements.

“I think that training alone will open doors for them. They can continue that training if they want to,” he said. “It gets them excited about the possibilities in it, and there are other training programs out there.”