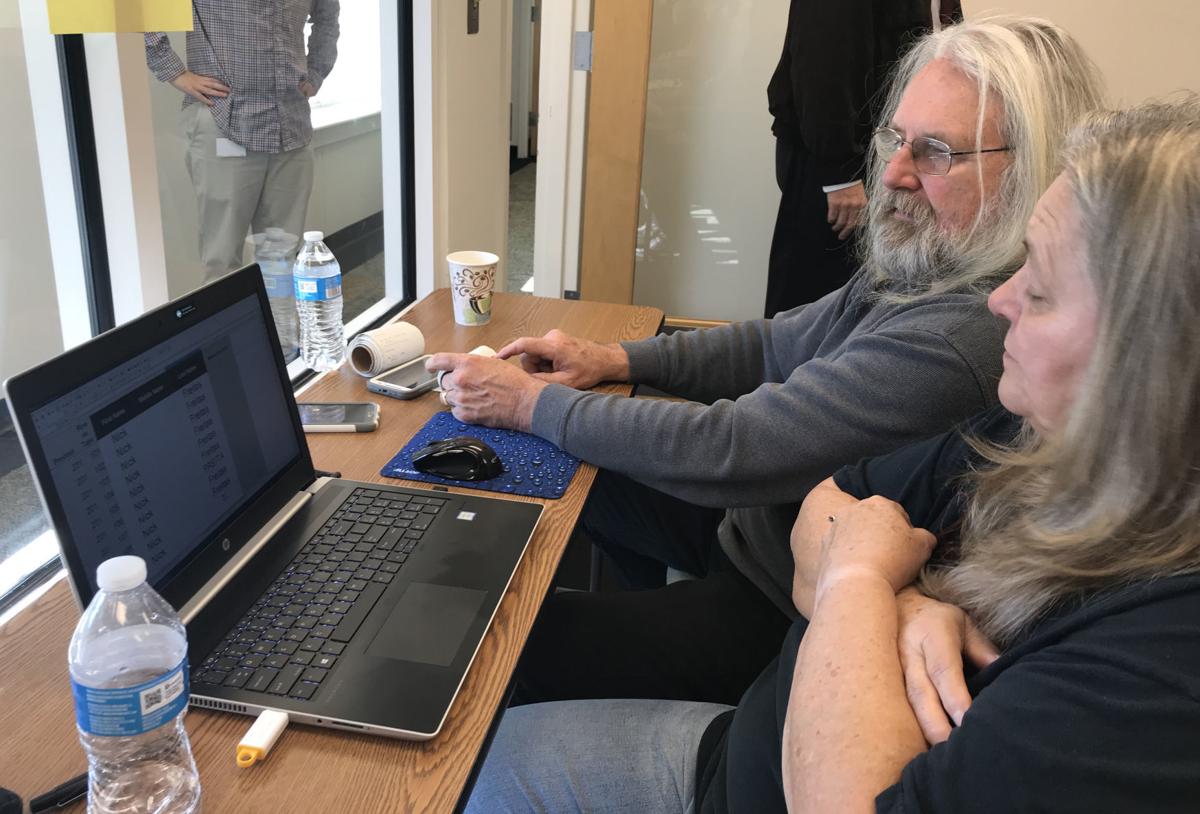 Culpeper County election officers Wayne and Lynette Stewart participate in Wednesday’s canvass to certify the vote, including 5,330 ballots cast as write-ins in the District 30 House of Delegates election. 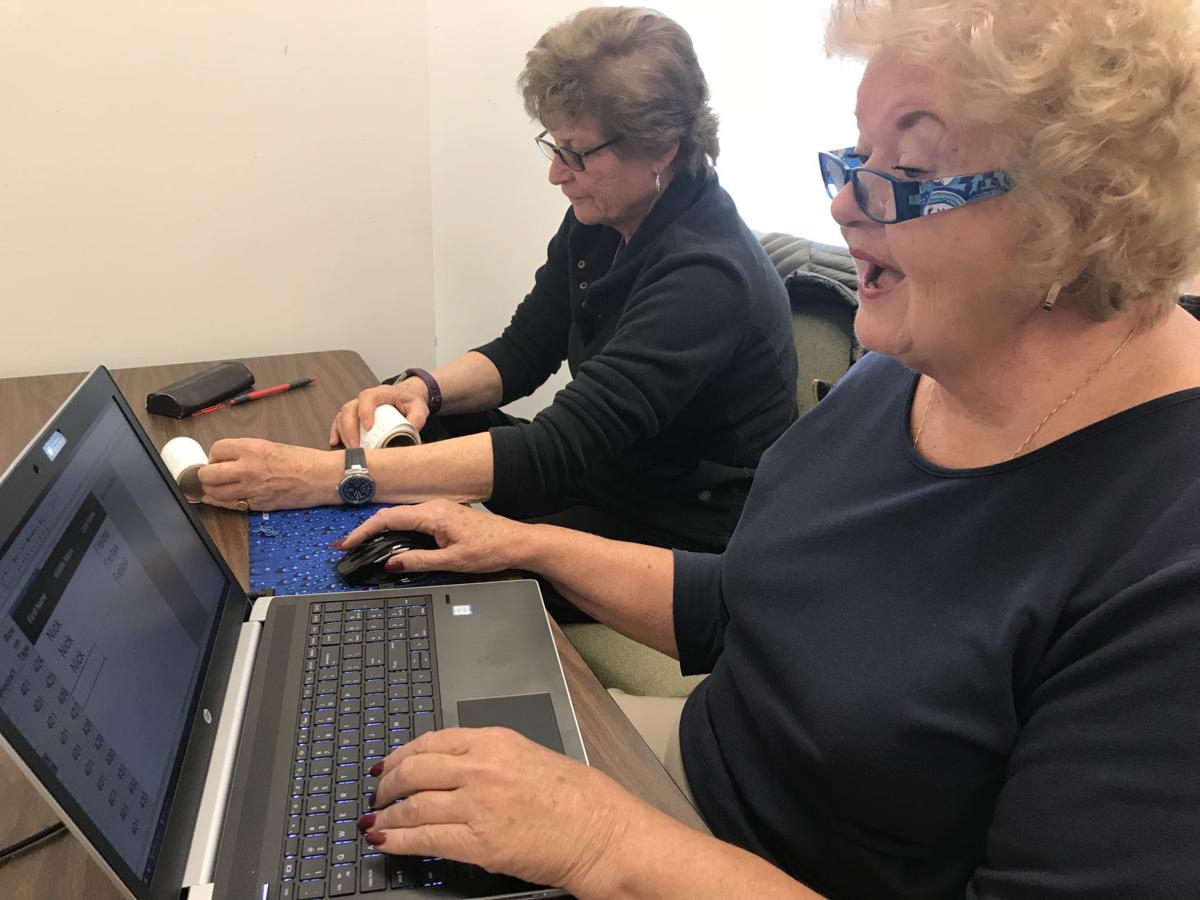 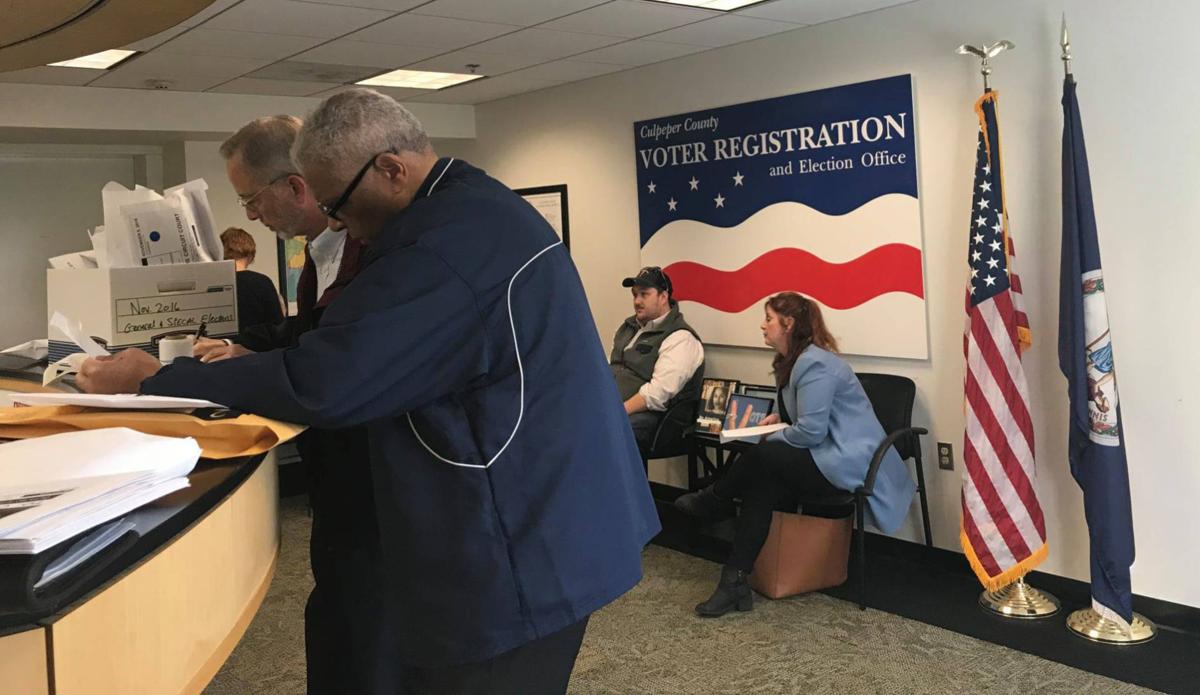 Culpeper County Electoral Board members Clive Richmond (left at the counter) and Chuck Holmes start the canvassing process to certify the vote in Tuesday’s election on Wednesday morning in the local voting office on Main Street. At back are members of the Nick Freitas campaign. including campaign manager Joe Desilets (seated at left).

Culpeper County election officers Wayne and Lynette Stewart participate in Wednesday’s canvass to certify the vote, including 5,330 ballots cast as write-ins in the District 30 House of Delegates election.

Culpeper County Electoral Board members Clive Richmond (left at the counter) and Chuck Holmes start the canvassing process to certify the vote in Tuesday’s election on Wednesday morning in the local voting office on Main Street. At back are members of the Nick Freitas campaign. including campaign manager Joe Desilets (seated at left).

Campaign representatives, the electoral board, election officers and voter registrar’s staff gathered Wednesday morning in the voting office on Main Street in Culpeper to certify the vote as part of the electoral board’s regular canvassing operation.

This year, the operation includes the reading and recording into a computer network of 5,330 write-in votes cast in the District 30 House of Delegates election.

Two-term incumbent Nick Freitas, R-Culpeper, Tuesday night declared himself the winner in the race with Democrat Ann Ridgeway, of Madison, who garnered 4,505 votes in Culpeper County or 45.81 percent.

Throughout the district that spans Culpeper, Madison and Orange, 15,116 write-in votes were cast—presumably for Freitas—as part of the incumbent’s massive campaign effort that included pens with his name on it at the polls. District-wide, Ridgeway received 10,998 votes or 42 percent.

“Our job just started,” Culpeper County Electoral Board Chairman Jan Huss said as the opening of the canvass process, an official electoral board meeting, on Wednesday.

She expected the process would continue into the weekend, comparing it to watching paint dry.

“We have so many write-in votes,” Huss said.

Around 10 a.m., 10 election officers—divided into five teams of two—started the process. Each handwritten vote from each voting machine in the county’s 15 polling sites was printed out onto white rolls of paper. As one officer read the name and exact spelling, another officer typed it into a computer document.

During a 10-minute observation period, all of the names being read aloud indicated write-in votes for Freitas though the spelling varied—Nick Frietas, Nick Fruttis, Nick Freits and Nick Feitas, to name a few. Many of the write-in votes had the spelling right and included an “R” for Republican after his name.

Once all the votes are entered, said Huss, the Electoral Board will determine which votes are valid and certify the totals. Exact spelling is not a requirement for the vote to count, she said.

In each of the voting precincts in Orange and Madison counties, District 30 write-in totals were higher than the votes Ridgeway received. In Culpeper, however, Ridgeway won the Democratic-leaning town precincts at East and West Fairfax, Willow Shade and South Ridge.

Freitas posted on Facebook on Wednesday morning as the canvassing process launched: “We are waiting for the official count today, but I wanted to thank our campaign staff, volunteers, county committees, and all of the organizations that helped us achieve this historic write in victory! There were a lot of people that said this couldn’t be done. You have proved them all wrong! God bless!”