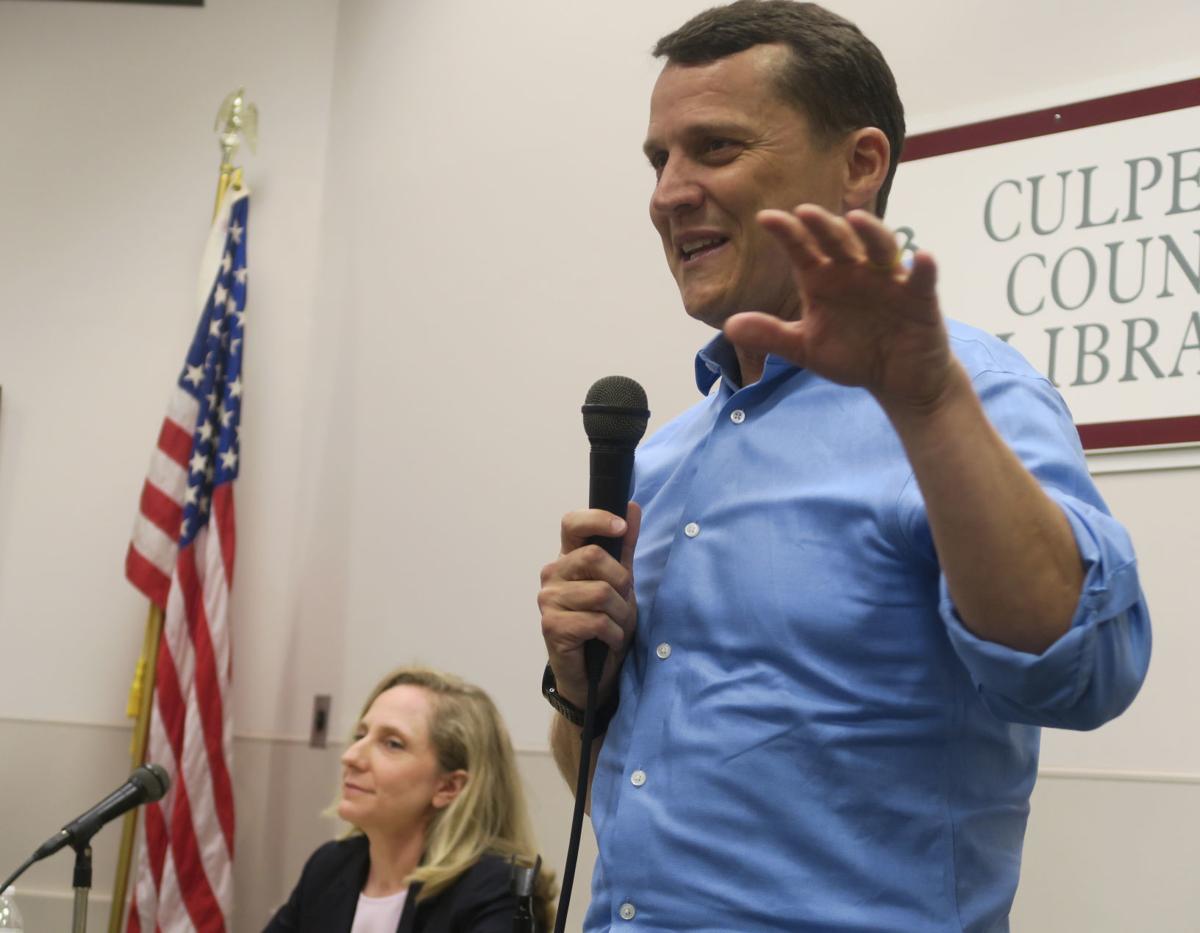 Abigail Spanberger, left, and Dan Ward participated in a Democratic candidates forum Saturday at the Culpeper Library. Both are seeking their party’s nomination in the June Primary to run against Rep. Dave Brat in November. 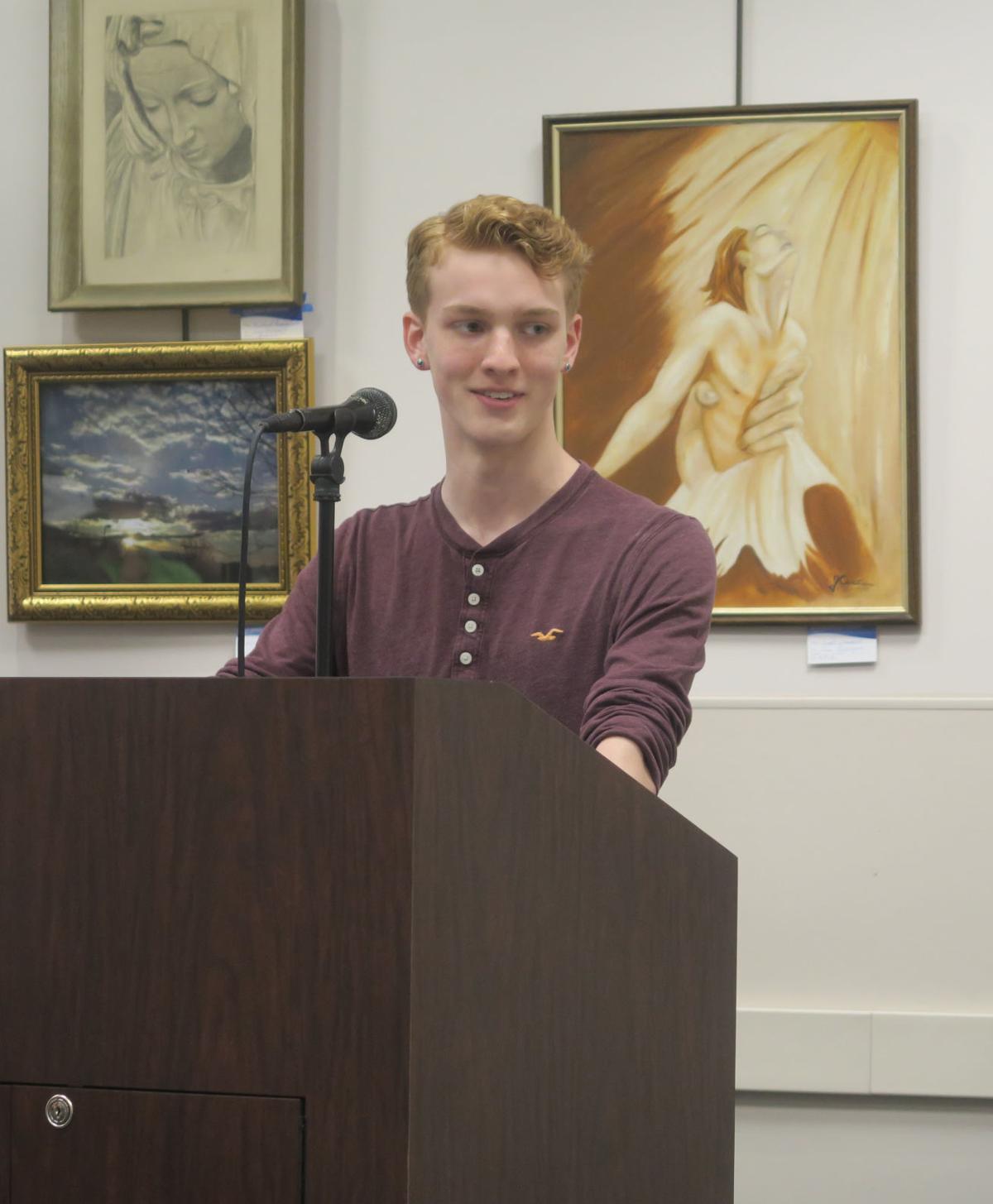 Josh Houston with Culpeper Youth and the Culpeper Young Democrats asks a question at Saturday’s candidates’ forum in the library. 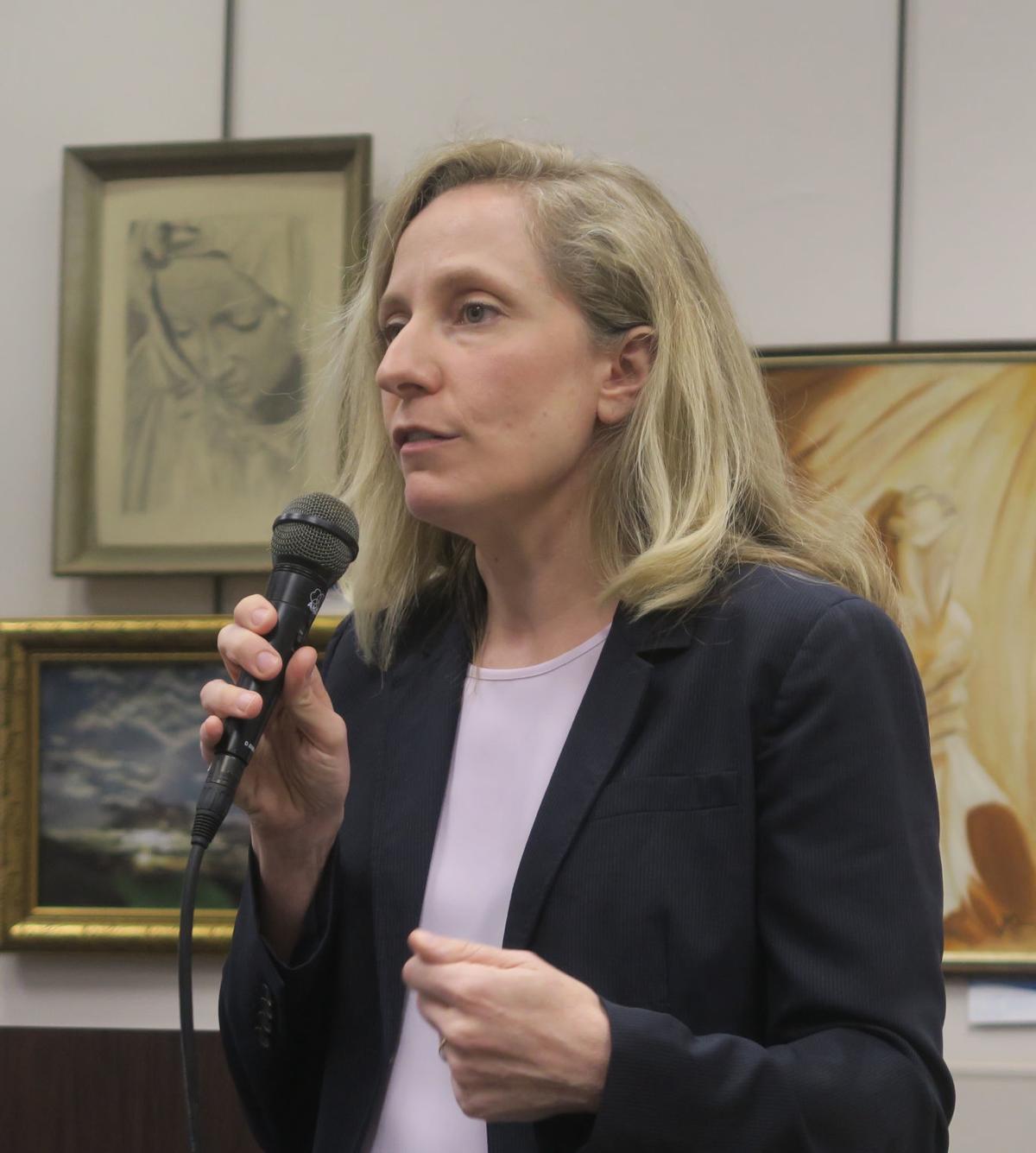 Democrat Abigail Spanberger is a former CIA operative and university consultant. She is seeking the nomination in the June primary to run against Rep. Dave Brat in November. 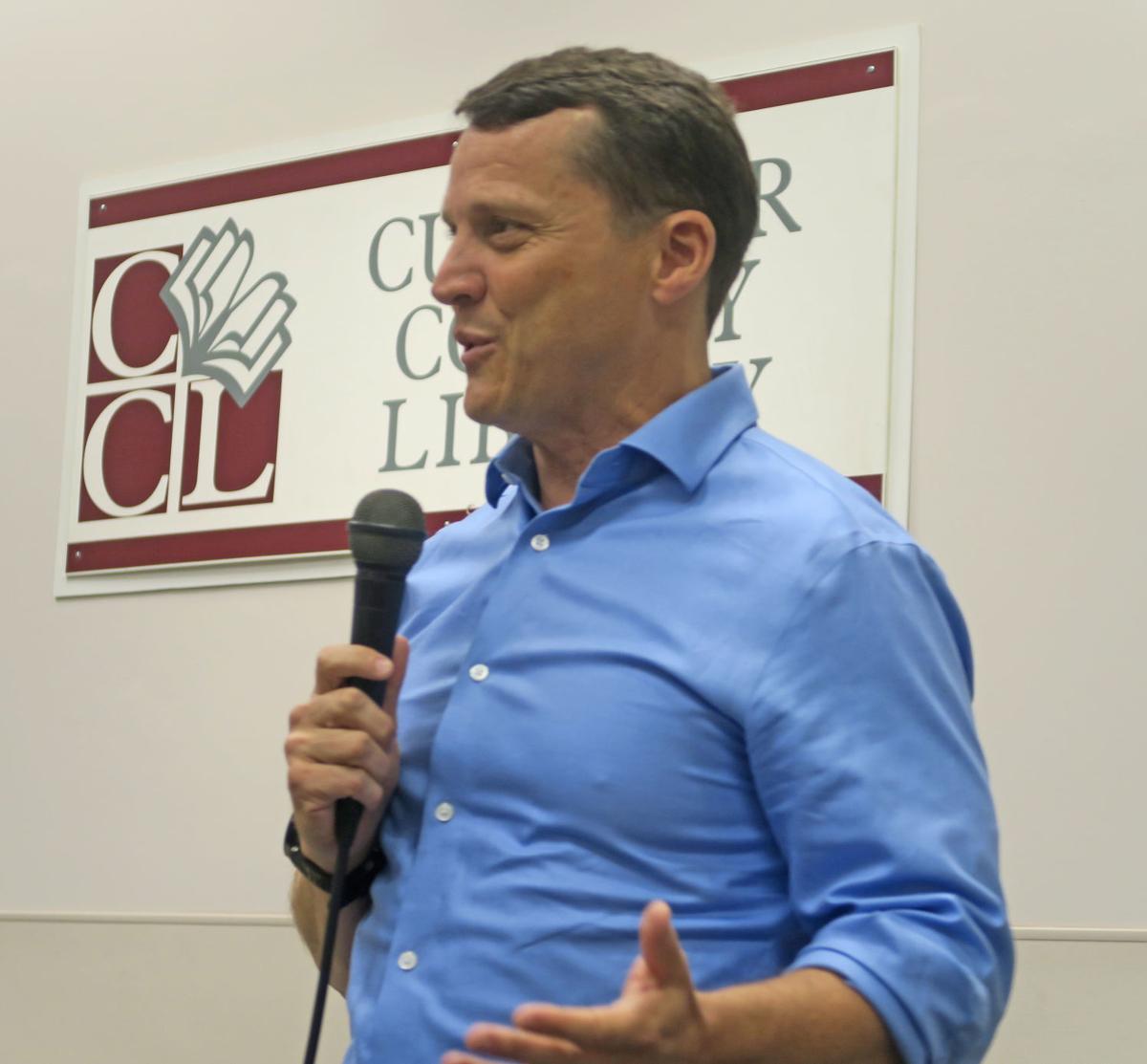 Democrat Dan Ward, of Orange, is a former Marine combat pilot and farmer. He is seeking the nomination in the June primary to run against Rep. Dave Brat in November.

Abigail Spanberger, left, and Dan Ward participated in a Democratic candidates forum Saturday at the Culpeper Library. Both are seeking their party’s nomination in the June Primary to run against Rep. Dave Brat in November.

Josh Houston with Culpeper Youth and the Culpeper Young Democrats asks a question at Saturday’s candidates’ forum in the library.

Democrat Abigail Spanberger is a former CIA operative and university consultant. She is seeking the nomination in the June primary to run against Rep. Dave Brat in November.

Democrat Dan Ward, of Orange, is a former Marine combat pilot and farmer. He is seeking the nomination in the June primary to run against Rep. Dave Brat in November.

The two first-time Democratic candidates competing to run against Rep. Dave Brat in November met in Culpeper Saturday afternoon to talk about a range of issues with a local and national impact including immigration, healthcare, Social Security and guns.

Abigail Spanberger, of Henrico, is a former CIA operative and a mom who grew up in Short Pump and traveled the world before returning in 2014 to live in Virginia with her family. She most recently worked as a university consultant before leaving the position to work full-time on the campaign.

Dan Ward, of Orange, is a former combat pilot in the U.S. Marines and a dad who spent his earliest years in Tennessee before moving to this area, where he competed in the local farm show and got his first job at the Culpeper McDonald’s. He now works as a beef farmer and as commercial pilot.

Spanberger and Ward are seeking the Democratic nomination in the June 12 primary election. Whoever wins, will run against Brat, a former college professor seeking a third term in the U.S. House representing Virginia’s Seventh District, which locally includes Culpeper,Orange and parts of Spotsylvania counties and. Army veteran Helen Alli, of Richmond, has said she will compete in the race as an independent in November.

Spanberger and Ward shared similar beliefs in speaking Saturday before a crowd of more than 100 at the candidates’ forum held in the library and sponsored by the Culpeper Democratic Committee and the Culpeper Persisters.

Spanberger said she decided to run for office when the Republican-led Congress voted last May, once again, to repeal the Affordable Care Act.

“Healthcare is the No. 1 issue people are talking about,” she said, noting there are fewer options in rural areas.

The GOP continues to attack and undermine the Affordable Care Act, weakening the law, Spanberger said. If elected, she said she would support automatic enrollment in the program in addition to a public option for Medicare, called Medicare X, as has been proposed by U.S. Senator Tim Kaine.

Ward also supported Medicare X and said the state legislature, in addition, needed to expand Medicaid under the Affordable Care Act, which Virginia has yet to do. He advocated for a single payer system, taking “the profit motive” out of healthcare.

“We are paying almost twice as much as the rest of the world for a product that’s not very good,” he said.

Ward said he’s running for Congress to stand up against corporate interests and stand up for the average working family.

“Negotiating with the likes of Trump and Brat is like negotiating with a tiger with your head in its mouth,” he said. “It’s not possible and it’s time to stand up.”

Asked how they would work to support the American farmer, Spanberger said part of it would be making sure farmers have healthcare. It’s also about stronger environmental regulations regarding runoff into waterways as well as fixing the immigration system.

“Part of the complication people are facing is when we see discussions about immigration and limiting workforces that are really important in a lot our agriculture work, we need to ensure we have a process whereby people can be in this country legally and can continue contributing and using their skills and much of that is done on farms in Virginia,” she said.

“We need to start having programs that encourage and help family-owned farms stay in business and stop the corporatizing of everything,” he said.

Both candidates said proposed soybean tariffs on American exports to China would hurt local farmers. Spanberger and Ward also agreed on the need to shore up Medicare and Social Security.

The costs of the programs are actually going down, according to projections, Spanberger said, but the problem is fewer revenues are coming in, partly due to the massive tax cut Republicans passed last year.

“We need to have an honest conversation about how it is that we can adjust the shortfall,” she said.

Ward said “you can bet your paycheck” that Republicans will seek to cut or privatize the programs next year, also tying the issue to fewer revenues due to last year’s tax cut.

“They passed that tax cut, trillion and a half dollars, that when our tax cut expires in a few years, 83 percent of that money will be going to the top 1 percent. Now the deficits are too big so they will start coming after those programs next year,” he said. “We have been paying into it our whole lives, it’s our money.

“We need to start addressing it from a moral perspective – giving people healthcare as well as a fiscal perspective of being responsible for maintaining our budget issues,” he said.

On the topic of guns, Spanberger, who carried a firearm daily in her undercover career in the CIA, said there doesn’t need to be a conflict between regulating who has a weapon and under what circumstances while still being in line with the Second Amendment.

“The conflict is created when we are unwilling to have the hard conversations about what is we expect in our society. And what is unacceptable children dying in schools or people in a movie theater because someone in a moment of crisis chose to use a firearm to kill them,” she said.

Spanberger supported universal background checks for all gun purchases, incentives for states to put in gun violence restraining orders for people who might be a threat to themselves or someone else and an assault weapons ban.

Ward said he got his first shotgun when he was six and went on to become a shot expert in the Marines.

“I know what I’m doing with a weapon, but we all recognize that there is a limit inside the Second Amendment. Where is that line drawn? You can’t go out and buy a tank but you can buy a semiautomatic assault weapon. I think the line is being drawn incorrectly primarily because the NRA is drawing that line,” he said

Finally, on the topic of immigration, Spanberger said it is a humanitarian and economic issue. She supported continued protections for DACA recipients as well as a pathway to citizenship for people brought to America as children by their parents without proper documentation.

“It is an issue of how our communities are built,” she said.

Ward said DACA recipients represent the best and brightest of immigrants in America.

“The American government made a deal with them. They’ve been here most of their lives, this is home. Our word should be good,” he said. “To play politics with those kids is shameful and we need to stop it right away.”

Allison Brophy Champion can be reached at abrophy@starexponent.com or 540/ 825-4315.