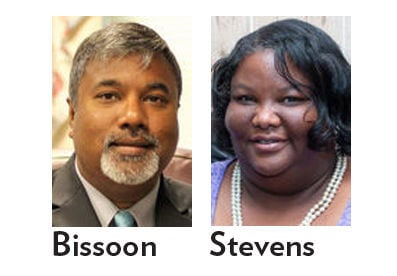 Incumbent Mark Bissoon was elected Caroline County’s commissioner of the revenue for four years ago after the retirement of longtime commissioner Sharon Carter.

Now the 46-year-old Bissoon faces a challenger on November’s ballot with ties to the Commissioner of Revenue’s office.

Sandra Stevens is employed as a master deputy in the Caroline County commissioner’s office. Both she and Bissoon are running as independents in the Nov. 5 election.

During his tenure, Bissoon has become accredited as a master commissioner of the revenue from the Weldon Cooper Career Development Program via the University of Virginia. “With these credentials, the office is fully accredited and we are one of the first four counties in the state to become fully accredited,” he said.

Bissoon has a background in project management and real estate brokerage and says it provided him with the tool set to manage the office, streamline tasks and plan future improvements.

Bissoon wants the opportunity to continue projects and system upgrades that he has implemented in the office. He also wants to continue the open communication with the citizens and be an advocate, not an adversary.

“Educating the citizens on how and why taxes are assessed [and] the way they are is a major concern for me and we are laying the groundwork with various forms of media to do just that,” he said.

Sandra Stevens, 48, has been with the Caroline County Commissioner of the Revenue office for 15 years and rose through the ranks to master deputy. She said her accounting background has enabled her to be a go-to employee for office decisions regarding the Division of Motor Vehicles and all levels of business and personal property taxes, state and local income taxes.

She oversees most of the departments in the office, except for real estate. She earned a master deputy commissioner certification with Weldon Cooper and a master’s degree in accounting and a minor in business law from Salem University.

Stevens said she considers improving communication and being open with taxpayers to be her most important goals.

“Citizens should be able to depend on fast, transparent and accurate answers when questions are present as it relates to all aspects of assessing and taxation in Caroline County,” she said.

Also, she plans to provide job training for employees and review office departments for needed changes.

The revenue commissioner’s post is the only contested constitutional office on the ballot in Caroline. Sheriff Tony Lippa, Commonwealth’s Attorney John Mahoney and Treasurer Elizabeth Curran are all unopposed in their bids for re-election.