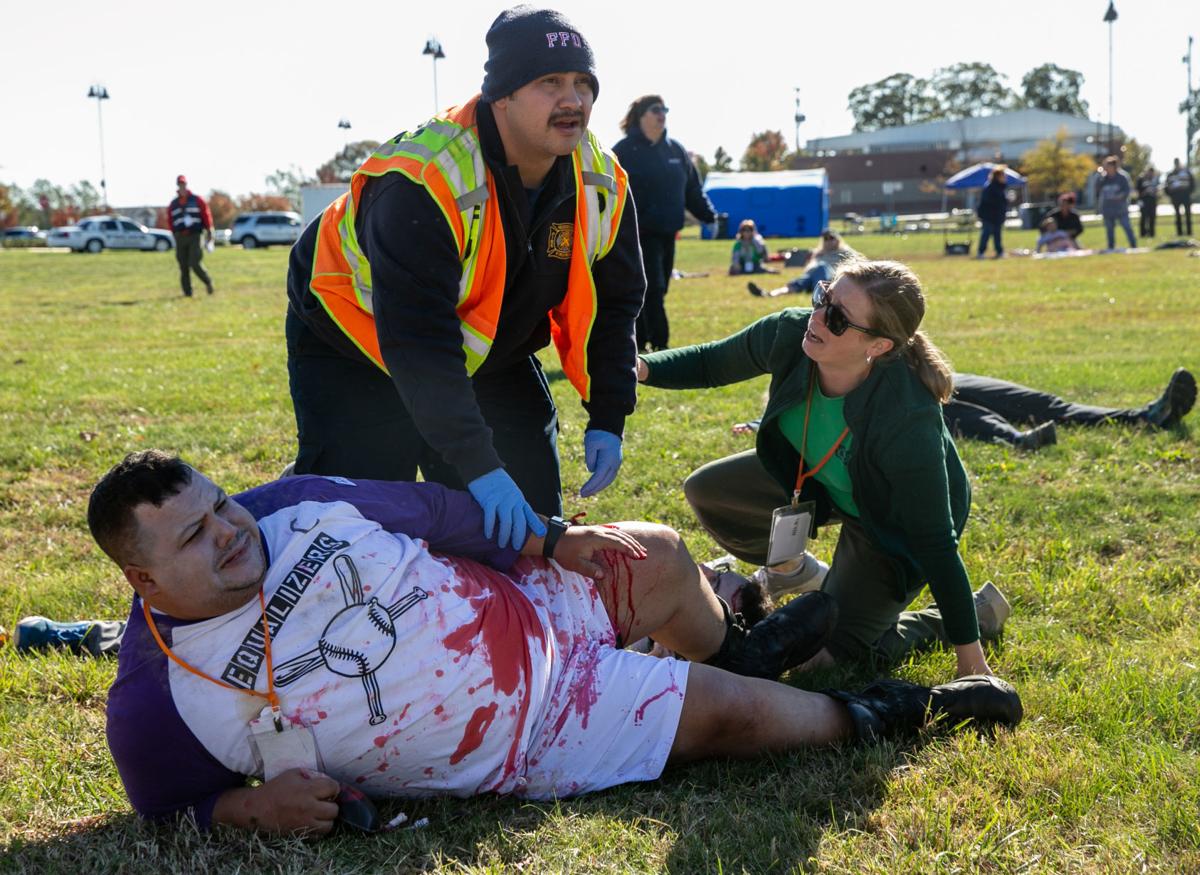 Christian Laureano–Dejesus is tended to during a mass casualty incident training drill Sunday. 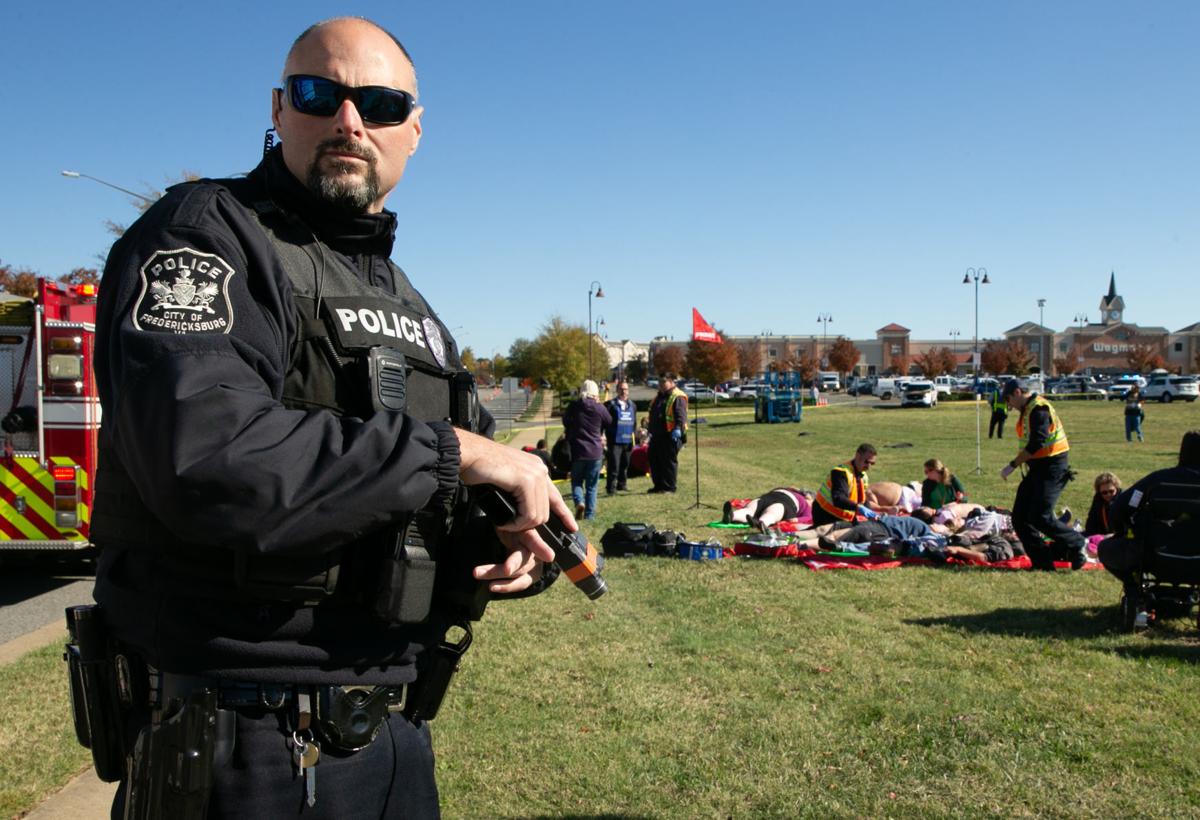 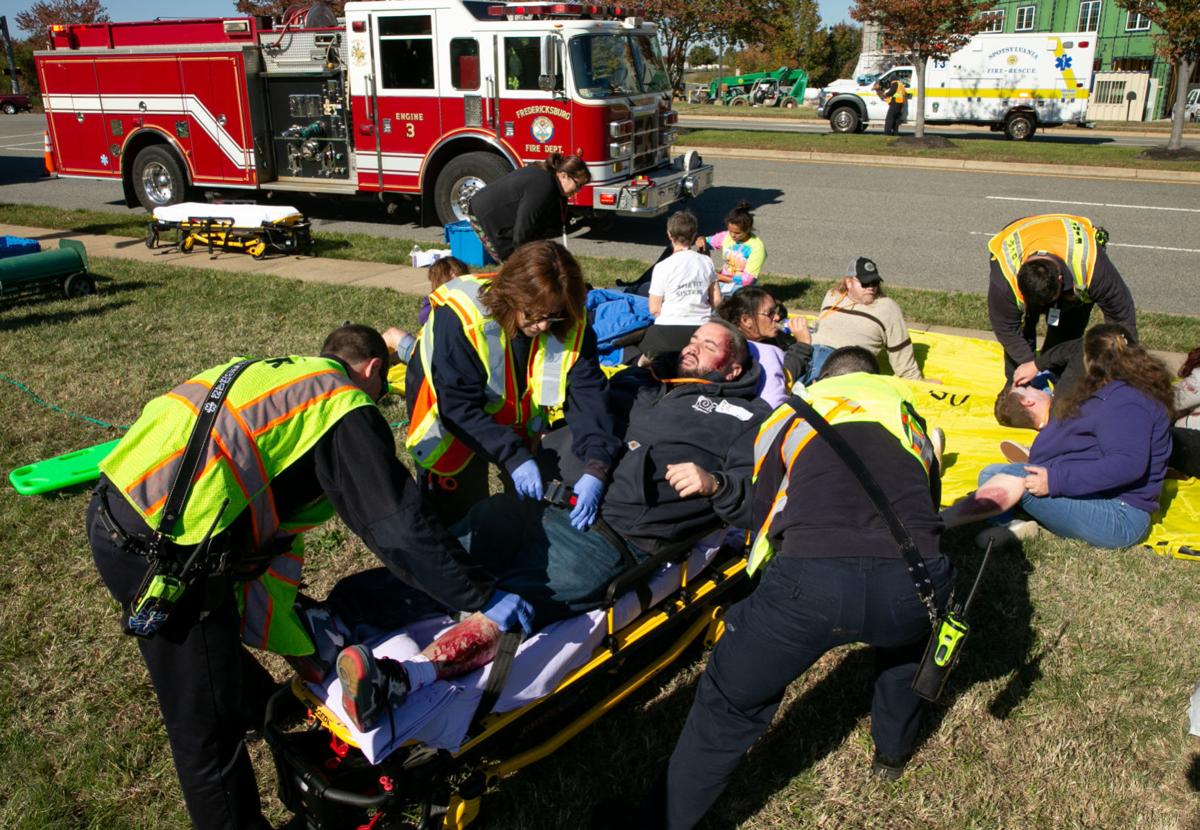 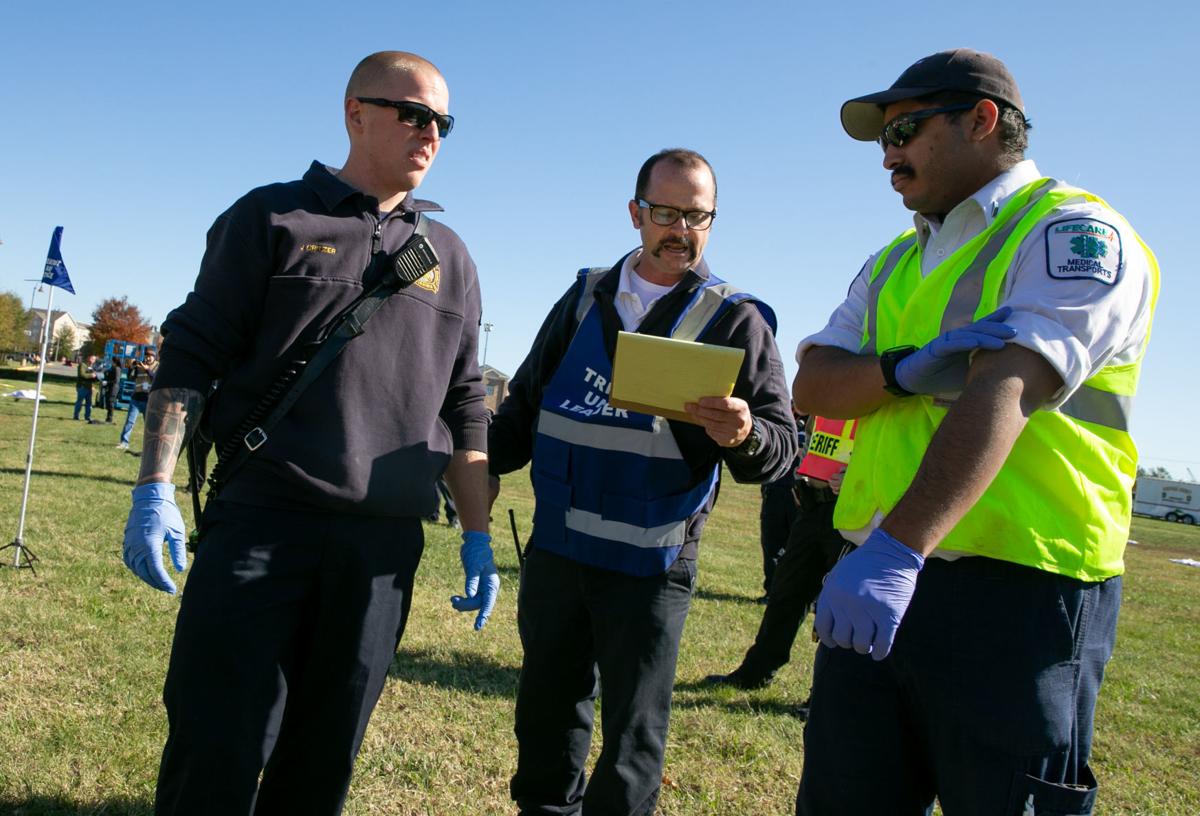 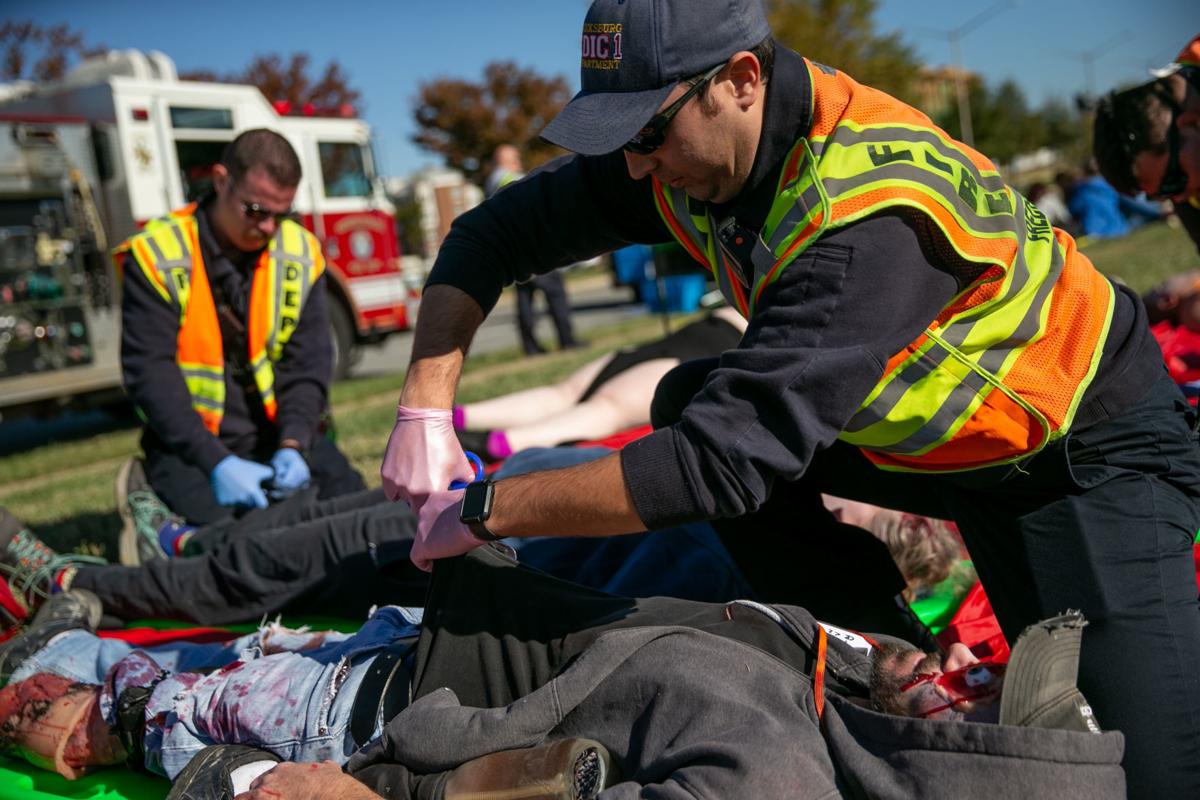 Simulated victim Richard Harrold and others are treated by Fredericksburg fire department personnel.

Christian Laureano–Dejesus is tended to during a mass casualty incident training drill Sunday.

Simulated victim Richard Harrold and others are treated by Fredericksburg fire department personnel.

For a moment, when the wailing started, it was easy to forget that this was just a drill.

Dozens of people had gathered in a field near Wegmans in Fredericksburg Sunday morning to cheer participants in a 5K race, which was part of a drill to simulate a mass casualty incident. Runners had barely rounded a corner on Carl D. Silver Parkway when a “bomb” went off, and the cheerleaders suddenly became the victims.

Their immediate cries were harrowing enough as their “injuries” became obvious through the yellow smoke that hovered over the field at Celebrate Virginia South.

A young woman had gashes on her forehead; another revealed multiple burns. The blast severed at least one arm and lower leg, and one man had a large piece of shrapnel protruding from his stomach.

Another man, whose clothes were removed down to his shorts in the 40-degree chill, was bleeding heavily from his femoral artery. An older woman, confused and bloodied, walked around in circles, calling out for her husband.

The scene’s realism ratcheted up another notch when police arrived. Their job was to secure the perimeter, not tend to those hurt, so victims couldn’t understand why no one ran to their side. They cried out:

When the first ambulances arrived, the wailing got even louder. Those who could do so screamed, moaned and waved their hands, and those who couldn’t were aided by fellow victims, who did everything possible to get the attention of first responders.

“Will you come help my daughter?” bawled Wendi Shackleford, a past assistant chief with the Fredericksburg Rescue Squad and one whose voice carried easily across the scene of chaos. “She’s having a baby, and nobody will help. Somebody, please, come save my grandbaby.”

While the 5K race was real, everything else that happened Sunday morning was part of a regional training exercise that included 16 agencies in the Fredericksburg area and about 500 people.

There was a reason organizers named the race the “Chaos 5K,” said Kelsey Rideout, spokesperson for the Fredericksburg Fire Department.

“When this type of event happens, there is a lot of chaos, a lot of screaming, a lot of uncertainty,” she said.

Participants try to imagine every possible scenario involved in working between several different agencies, she said, so they can test their procedures and adjust them as needed. More than a dozen evaluators stood nearby to rate the actions of those involved with securing the scene, interviewing witnesses, tending the wounded and transporting them to all three local hospitals, which also participated.

“We’d rather learn in training than on the 6 o’clock news,” Rideout said.

Soon after crews arrived from the Fredericksburg Police Department, Lt. Jack McGovern was named triage incident leader. He and others set up specific areas for the wounded: those with the most immediate needs were brought by stretcher to a red blanket. Yellow was for those whose care could be delayed by a few minutes and green was for what one officer called the “walking wounded.”

Farther away was a black blanket designated as the morgue. By the end of the drill, three victims had been moved to to that area, and white blankets covered the bodies of seven mangled mannequins in the field.

Members of Rappahannock Emergency Medical Services made up “The Ghoul Girls,” or the moulage group, those who apply mock injuries for such drills. Before the drill, they asked volunteer victims what scenarios they were comfortable playing.

Christian Laureano–Dejesus, who served in the Marine Corps and as a fire department volunteer, said he would simulate “whatever you guys need me to do, as long as you don’t cut my underwear.” At one point, his white shorts and shoes were the only things that remained on his body.

All the first responders participating in Sunday’s drill met at the Fredericksburg Conference and Expo Center at 8:30 a.m., but knew no specifics about what would happen.

Once the incident began, units from Stafford and Spotsylvania counties were held at the Expo Center for as long as it would have taken them to get there from their home bases, said Sonja Cantu, public information officer with the City of Fredericksburg.

The city also posted signs around Wegmans about the incident and alerted people on social media. Still, an hour into the training, organizers tried to put out another fire—a rumor that a bomb had gone off in downtown Fredericksburg.

Organizers plan to continue the training and have it out in the open where people can see that regional responders are working together. Last year’s incident was a mass shooting and was held in a secluded area.

“We want to make sure that if the big one happens,” Rideout said, “we are as prepared as we can be.”