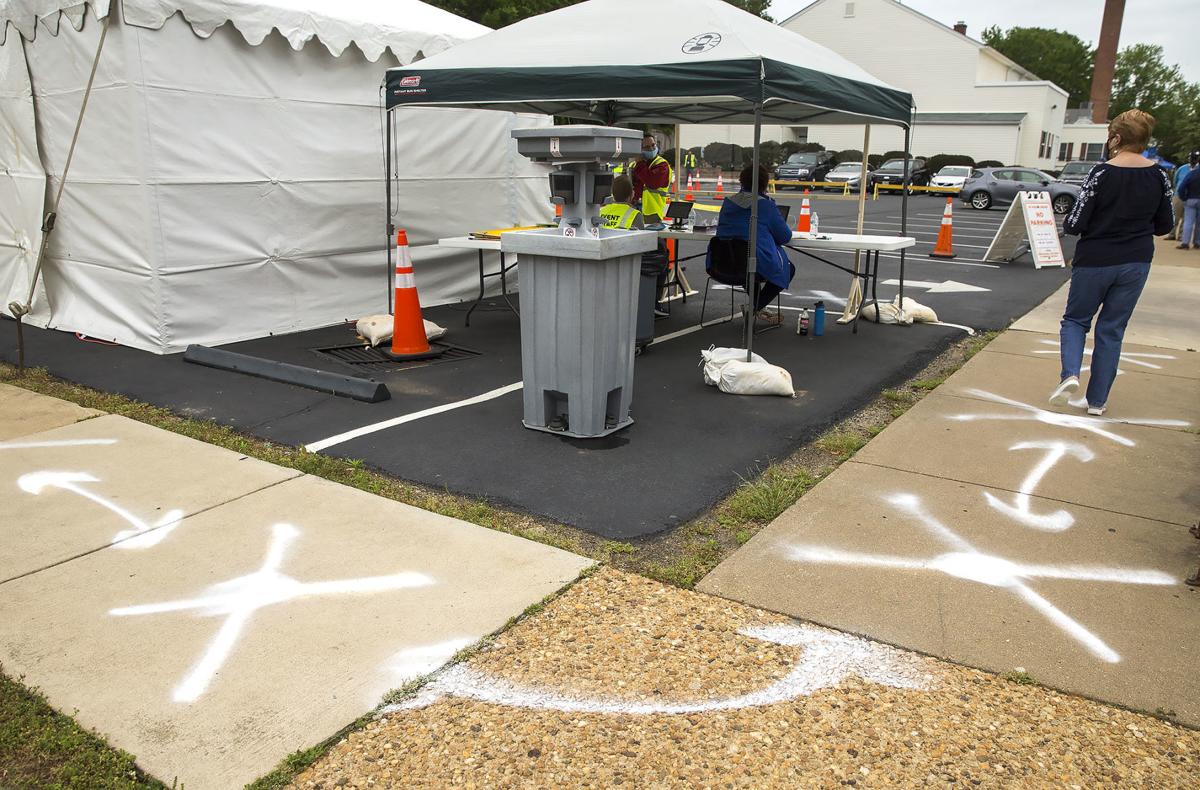 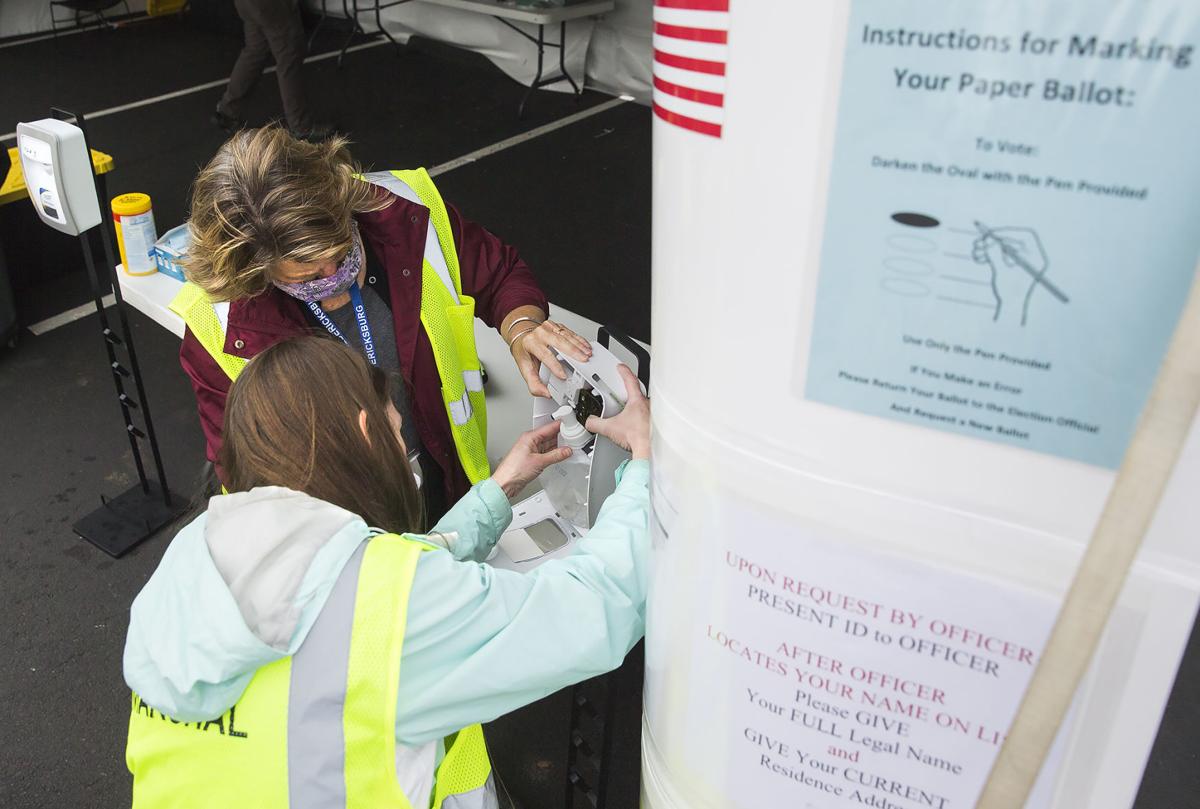 Jincy Brown (bottom) and Carolyn Helfrich try to refill a hand sanitizer dispenser at the Dorothy Hart Community Center polling station in Fredericksburg on Tuesday, May 19, 2020. Several dispensers were available for election officials and walk up voters to use. 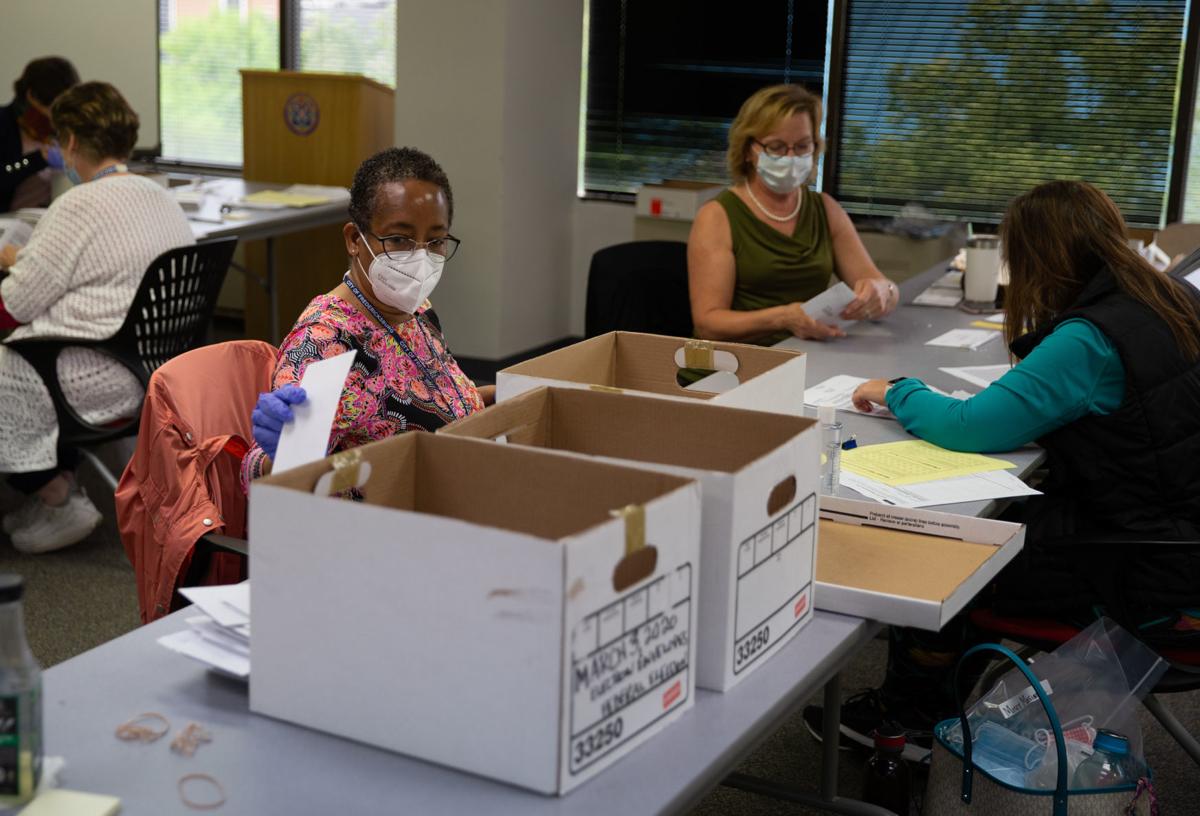 Jincy Brown (bottom) and Carolyn Helfrich try to refill a hand sanitizer dispenser at the Dorothy Hart Community Center polling station in Fredericksburg on Tuesday, May 19, 2020. Several dispensers were available for election officials and walk up voters to use.

Rene Rodriguez did a dry run Monday of the drive-thru voting lane laid out between orange traffic cones in the Dorothy Hart Community Center parking lot.

As chairman of the Fredericksburg Electoral Board, he wanted to make sure that it would be wide enough for residents’ vehicles when they used it Tuesday while casting their votes for mayor and the two at-large seats on City Council.

It was one of the finishing touches for an election process that the board began planning in March to keep voters safe during the COVID-19 pandemic. With the Virginia Board of Elections’ approval, they consolidated the city’s in-person voting precincts at Dorothy Hart and set up an expanded operation to count more than 2,100 absentee ballots at Executive Plaza.

People were urged to vote absentee in this election because of the coronavirus, and the result was that the city received more than it ever has in its history, Rodriguez said. He added that voter participation overall also appeared higher than normal by early afternoon.

“People are coming out who never voted before,” he said. “I think it’s the times that we’re in. People are looking for strong leadership.”

They had their choice of two candidates for mayor: Mary Katherine Greenlaw, who was running for a third term, and Anne Little, who was running for the first time. Jon Gerlach was challenging incumbent City Council members Kerry Devine and Matt Kelly for their at-large seats, and Jarvis Bailey and Jannan Holmes were running unopposed for School Board.

Voters who hadn’t mailed their absentee ballots in or wanted to vote in person Tuesday had several options.

If they chose to drive to Dorothy Hart, they were met by an election officer who checked to make sure they were registered and invalidated an absentee ballot if they’d brought one. A runner would then hand them a manila folder containing a fresh ballot, along with a pen that they were told to keep and an “I Voted” sticker. Once they filled in their ballot, they got to watch as it was fed into the tabulator for their normal precinct.

People who walked there went first to a tent where election officials were seated behind a Plexiglas divider. After their name was checked against the registration book, they received a ballot they could fill out in a neighboring tent before it was fed into a tabulator.

“It’s been really steady, and we’ve had no issues,” said Scott Vezina, who was in charge of the operation at the community center. “We’ve been able to get people in and out fairly easily.”

Candidates braved the breezy weather to set up tents outside the community center so they could talk to voters and hand out brochures. Among them was Little, who said a voter had called that morning wanting to know what she should do about voting absentee. She said she told the woman it could be dropped off in the red box in front of Executive Plaza if she didn’t want to vote in person.

The Voter Registrar’s office is in Executive Plaza, and the centralized absentee precinct was set up on its third floor. Jarreth Rodriguez, who was in charge of that precinct, said he spent 13 hours Monday getting it ready for the avalanche of absentee ballots. He streamlined the operation and spaced the chairs so precinct workers could maintain social distancing.

“I would normally have about four people working here,” he said Tuesday. “Today, I have 13.”

Each one received a bag containing several masks and gloves so they could change them throughout the day, and the tables they were using were disinfected periodically.

“I think it’s running smoothly,” said Marianna Bedway, who has worked at the polls for four years.

As an additional safety measure, Rodriguez asked restaurants to donate food for the poll workers so they wouldn’t be bringing in food from lots of different locations on Election Day. Chick-fil-A provided breakfast, Juan More Taco sent over lunch, and Primavera Pizzeria delivered dinner.

The new election format was “working like gangbusters,” and there had been no problems, he said Tuesday afternoon.

“Pending a couple [internal] logistical tweaks,” Rodriguez added, “what was the May election and how we prosecuted it is a dry run for how we will prosecute the June primary.”